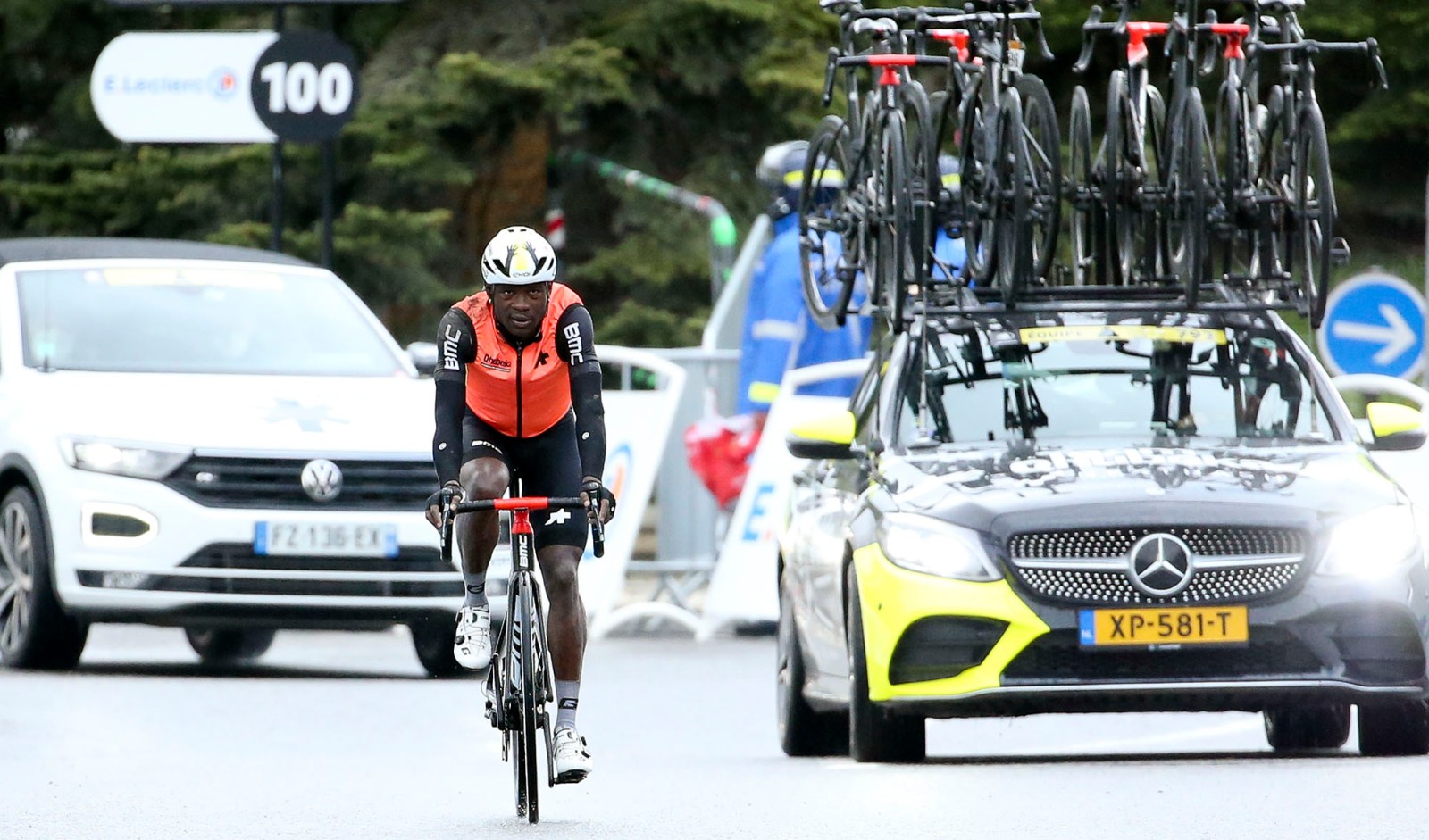 South Africa's Nicholas Dlamini of Team Qhubeka-NextHash crosses the finish line – after the deadline, 1h24mn behind the winner – of stage nine of the 108th Tour de France. The 145km stage was between Cluses and Tignes. (Photo: John Berry/Getty Images)

The South African's race ended on a brutal day in the Alps on Sunday, which claimed 12 riders, but at least the Team Qhubeka NextHash rider ended it on his bike.

Nicholas Dlamini, the first black South African to ride the Tour de France, was one of the casualties during Sunday’s 144.9km stage nine from Cluses in the northern Alps to the mountain-top finish at Tignes. Dlamini finished the stage, but failed to do it in the cut-off time.

Not noted as a specialist climber, Dlamini – along with the Tour’s leading sprinters such as green jersey holder Mark Cavendish and 11-time stage winner Andre Greipel – rode in a grupetto at the back of the field.

This group of riders’ only objective was to finish within the cut-off time, which is calculated as a percentage of the stage winner’s overall time. It’s a complicated formula that takes the winner’s time, calculates the average speed and then uses a predetermined coefficient based on the stage profile (mountain stages being the hardest) to come up with a time differential.

On Sunday’s stage nine the time allowed between stage winner Ben O’Connor and the cut-off was 37 minutes and 20 seconds. The idea is to ensure that even riders, mainly sprinting specialists, do not cruise the course and conserve energy for the next day. They are still required to race.

Struggling riders on mountain stages form a grupetto, or small group, at the back of the race and pace each other to ensure they reach the end within the cut-off limit.

But on Sunday, with pouring rain and temperatures dropping to 10 degrees Celsius at the top of passes, it was always a struggle. Dlamini fell on one of the descents and lost contact with the grupetto and there was just no way back for the 25-year-old.

He continued to ride and refused to abandon the race, finally crossing the line one hour, 24 minutes behind O’Connor’s winning time, and was therefore eliminated from the race.

“It was a hard stage and there were some honest climbs; the nature of the stage and the weather didn’t make it easy,” an exhausted and upset Dlamini said after the stage.

“It was just a bad day to have a bad day. I was already unlucky to also crash and lose contact and after that I was on my own, so it was really difficult to just ride a good pace and get to the guys on my own.

“I would have loved to finish the race because it is sad to finish this way. But for me the most important thing was not to stop and ride until the finish regardless of being out of the time limit.

“It’s a special race and it’s always been a dream of mine to ride the Tour de France and I think just getting off my bike and into a car wouldn’t be an option. I’m glad that I finished even though I finished an hour and half from the winning time – it was a hard, bad day.

“I’d really like to thank everyone for the great support, from when the Tour started up until this point. The support has been amazing and that was the reason that I wanted to really finish today and not get off my bike and into a car.

“This is a race that I wanted to honour, and honour my dream. It was my first Tour de France and I knew it would be hard but I’ve honoured that dream; I am disappointed but at this point there’s not much I can do.”

Slovenian pre-race favourite Primož Roglič also abandoned after stage eight, the first day in the Alps on Saturday, losing 35 minutes during the 150.8km slog from Oyonnax to Le Grand-Bornand.

Roglič crashed badly during the third stage in the western Brittany region and had been struggling since. The Jumbo-Visma team said he would focus on new goals.

“We took the decision all together with the team, it doesn’t make sense to continue,” Roglič said. “It’s just too much for my body at the moment and yeah, I cannot race,” the 31-year-old said. “I’m disappointed. I didn’t plan it to be the way it is, but in the end I have to accept it.”

Stage eight was also raced in driving rain, and with three major climbs, including over the legendary Col de Colombière, it took its toll. The 2018 champion Geraint Thomas also lost 35 minutes on the road during stage eight while most major contenders fell away as defending champion Tadej Pogačar took control of the race.

For Team Qhubeka NextHash, and for many other teams, it was purely a day of survival. After the first major climb of the stage there were fewer than half the 177 riders who started remaining at the front of the race. A brief slowing by the yellow jersey group allowed most riders to come back and a break to go clear up the road.

There were small groups of riders all over the Alps. The descents were just about as difficult as the climbs, as the cold rain made it difficult for riders to brake, some even stopping to change into dry clothing.

The rest of the Team Qhubeka NextHash riders finished within the time limit, although Victor Campenaerts made it by only seven seconds.

With Roglič out of the tour and Thomas nearly 40 minutes behind Pogačar in the overall race for the Maillot Jaune, the Slovenian is well positioned to win his second Tour.

O’Connor won stage nine after launching a solo break with 17km to go. Sergio Higuita was unable to follow the 25-year-old as O’Connor powered up the Col du Pré for the finish at Tignes.

“Just to be taking part in the Tour de France in the first place is a dream. Then to achieve a victory like this one is excellent, a great reward to everyone who has supported me over the years,” O’Connor said. “It’s been a wild ride.”

Pogačar was relieved to stay in yellow after the tough day, especially as he fell more than eight minutes behind O’Connor during the stage, which made the Australian the virtual leader on the road for a while.

“I’m sure a lot of guys suffered today,” said Pogačar. “I was scared that I might lose the yellow jersey just the day before the rest day. I’m happy to keep it.” DM