Ethiopia’s election was peaceful, not competitive but... 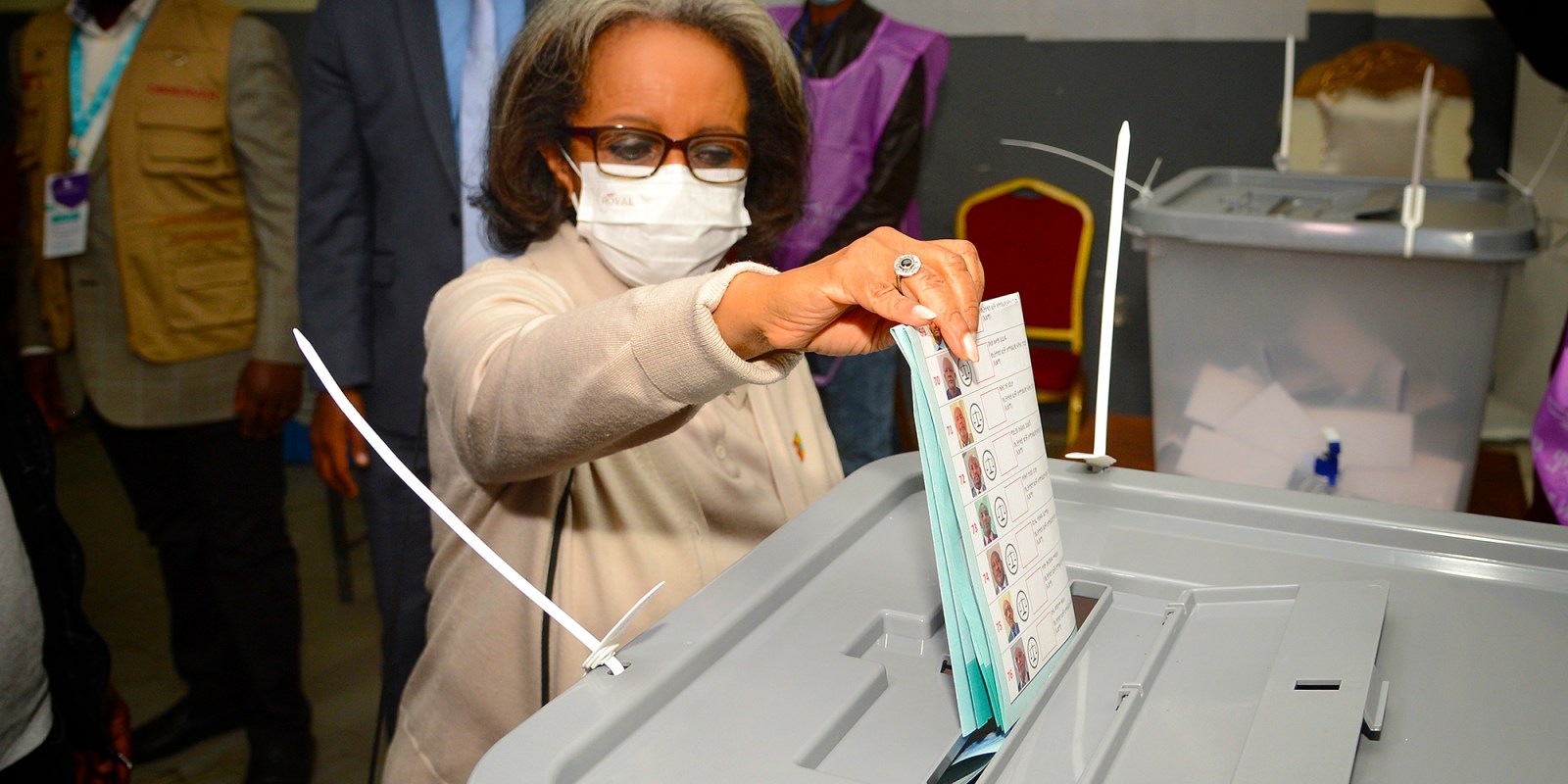 The President of the Federal Democratic Republic of Ethiopia Sahle-Work Zewde (C) casts her ballot in the general elections at a polling station in Addis Ababa, Ethiopia, 21 June 2021. (Photo: EPA-EFE/STR)

The polls give technical electoral legitimacy to the ruling party, but aren’t enough to resolve deep political cleavages.

Despite some delays, 21 June saw Ethiopia hold its sixth national elections since the downfall of the Derg regime and the reconfiguration of the state along ethno-regional lines in 1991. Although the 2005 polls had an element of competitiveness, none of the past five elections was free, fair and competitive.

Partly due to Prime Minister Abiy Ahmed Ali’s much-lauded reformist zeal, this election was anticipated to be a democratic way out of Ethiopia’s authoritarian past. But despite efforts to reform laws on political parties’ registration and election code of conduct, reconstitute Ethiopia’s National Election Board and open up the political space, the elections were far from competitive. They were peaceful, though.

Close to 38 million Ethiopians (78%) registered to vote. Two major opposition parties from the largest and most populous Oromia region boycotted the polls, and there was no voting in three of the country’s 11 regions. Preliminary results suggest that the ruling Prosperity Party will secure a landslide victory at the federal and regional houses.

Given its political divisions and historical social cleavages, many observers argue that the election is just one step in the right direction for Ethiopia. Other robust political mechanisms will be needed to resolve the country’s structural ills.

The elections were postponed twice due to Covid-19 and other logistical, security and associated reasons. Some opposition parties contested the postponement on procedural grounds.

This led the Tigray People’s Liberation Front (TPLF) to hold regional elections in Tigray in September 2020. This was done despite the federal Parliament’s extension of the federal and regional governments’ term until Covid-19 no longer posed a public health threat.

The TPLF had been a member of the Ethiopian People’s Revolutionary Democratic Front but withdrew from the ruling coalition in November 2019, objecting to its merger with the Prosperity Party. The federal government and TPLF would later engage in violent confrontations, which are ongoing.

Political divisions, ideological incoherence in the ruling party and a fragile security apparatus have made the transition to democracy difficult. Incidents such as the murder of popular Ethiopian singer Hachalu Hundessa widened the cleavages and led to the arrest of some political leaders. Despite the 2018 promises of political reform, efforts to democratise have been disrupted by episodes of state repression.

The fundamental fault line in Ethiopia is the lack of agreement among political elites about the nature of the state — both past and present.

Before the elections, these fault lines were revealed by ethno-nationalist parties such as the TPLF, Oromo Liberation Front (OLF) and Oromo Federalist Congress (OFC) on the one hand, and the nationalist Ethiopian Citizens for Social Justice (Ezema) on the other. Others like the Prosperity Party, National Movement of Amhara (NaMA) and Balderas for Genuine Democracy opted to strategically use both ethno-nationalist and nationalist narratives.

The OLF and OFC boycotted the elections, citing their political leaders and members’ detention and concerns about electoral irregularities. This deprived the election of competitiveness and a level playing field. It also means the poll brings the country no closer to resolving major differences about the nature of the Ethiopian state.

Despite pressure from the international community to prioritise national dialogue and postpone the polls, elections went ahead in all but the Tigray, Harari and Somali regions. In the first two, security concerns prevented voting, and in the third, irregularities and defective ballots were cited.

Many expected Ezema, Balderas and NaMA to pose a serious challenge to the Prosperity Party in Addis Ababa and the Amhara region. Yet the ruling party is poised for a landslide victory. Some party members attribute this to the Prosperity Party’s popularity, citing the high voter turnout. Others link it to the approval and charisma of Abiy himself.

A senior analyst of Ethiopian politics told ISS Today that other factors could also be at play. These include the ruling party’s effective mobilisation of the electorate through its party structure, its promises of social and economic prosperity and voters’ desire for peace, security and stability.

Major opposition parties have submitted official complaints to the National Election Board alleging, among others, voter and observer intimidation, undue police presence around polling stations and local administrators’ interventions in the voting process. In the Oromia region, Abiy’s home state, the OLF and OFC parties didn’t participate, so the electorate’s political marketplace lacked competing ideologies and outlooks.

Hence the winner can only be legitimate in technical terms. If it achieves victory, the Prosperity Party can hardly claim a popular mandate to reconcile the country’s structural divides along ideological lines.

Given the political cleavages still looming over the Ethiopian body politic, the Prosperity Party shouldn’t read too much into the election results. It should focus on stabilising the country, stopping inter-communal conflicts, managing inflation, engaging the opposition and initiating an all-inclusive national dialogue. This could earn it popular legitimacy.

Besides being peaceful, the other legacy of the polls and Abiy’s political reform is the institutional stature of the National Election Board. With all its limitations, the board could become an impartial arbiter. Led by former opposition figure Birtukan Mideksa, it has done a commendable job while projecting its independence, rigour and impartiality.

Achieving this wasn’t easy, though. At times the public had to appeal for Abiy’s intervention to ensure regional administrations cooperated with the board’s technical and logistical demands. Despite bureaucratic and capacity hurdles, the board tried to create a level playing field, establish clear rules and procedures and conduct a credible election. So far it seems to have met the expectations of many critical observers. Guaranteeing its independence and capacity could help consolidate Ethiopia’s democratisation process.

Ethiopia is a decisive player in the Horn of Africa and the diplomatic capital of the continent. Now that elections are over — barring those in Somali and Harari on 6 September — Ethiopia should prioritise inclusive national dialogue and reconciliation to deal with its security challenges. DM