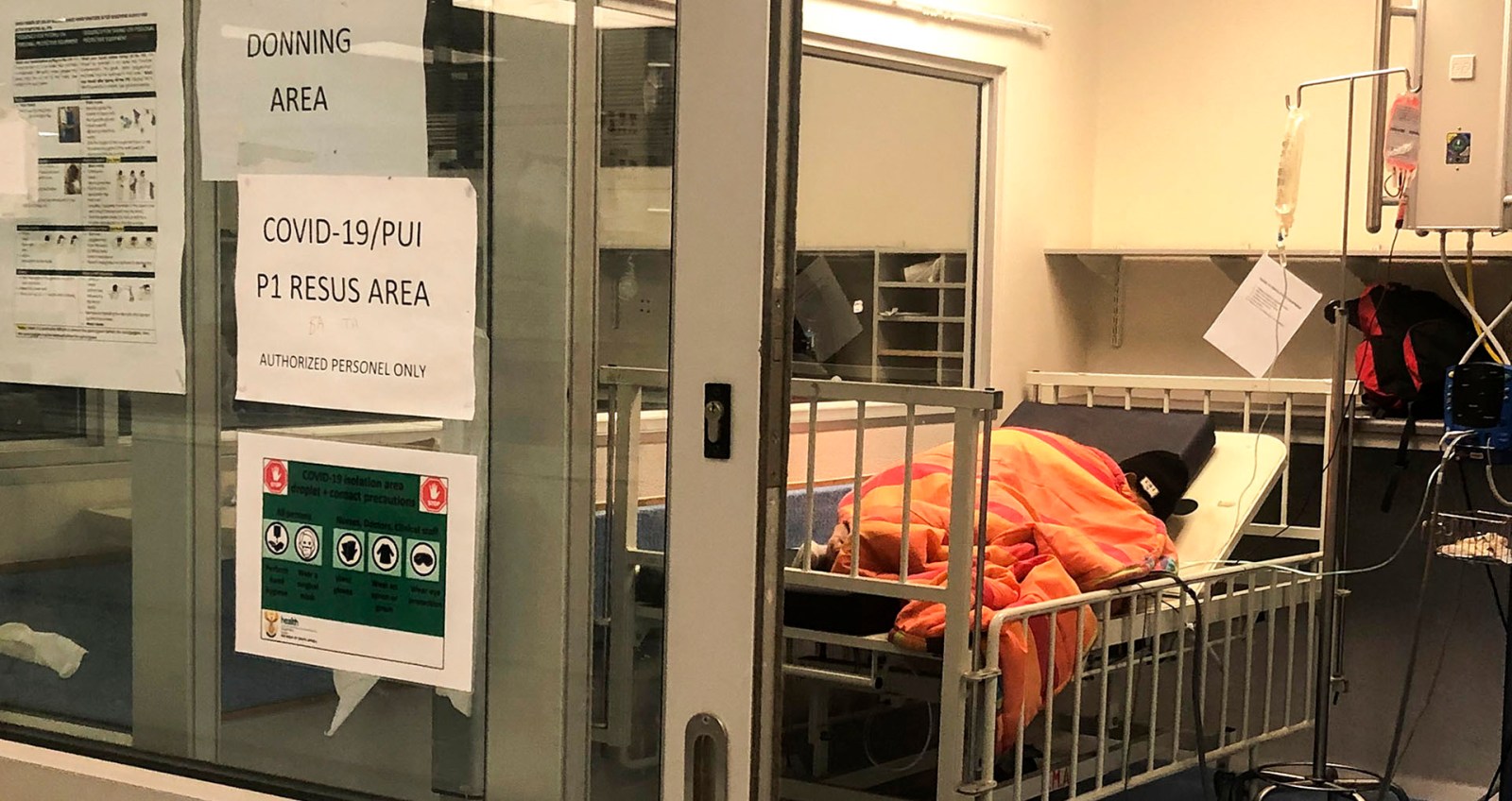 A patient in the Patient Under Investigation Unit in the emergency section at Livingstone Hospital, Port Elizabeth. (Photo: Shiraaz Mohamed)

According to the latest epidemiological report issued for the Eastern Cape, 44% of patients with Covid-19 in the Joe Gqabi District died in hospital. The report also cautioned that postmortem testing has revealed that high numbers of patients died without knowing that they had tested positive for the coronavirus.

With 44% of patients hospitalised for Covid-19 dying, the Eastern Cape’s Joe Gqabi District, around Aliwal North, has the highest case fatality rate in the province, according to the latest epidemiological report issued for the province.

The district is closely followed by the Amathole District, including large parts of the former Transkei, with a case fatality rate of 37.6%; the Chris Hani District (including Cradock, Middelburg and Komani), at 34.7%; and the OR Tambo District (around Mthatha), at 34.5%.

An investigation by the Eastern Cape Department of Health into the high death rates in provincial hospitals has found that the majority of patients arrived too late for treatment and clinicians could no longer assist them. No other details of this investigation have been made public by the department, with spokesperson Sizwe Kupelo saying that the findings had “not yet been presented”.

Nelson Mandela Bay remains the epicentre of the third wave in the province and on Monday had 2,380 reported active cases, an increase of 1,022 cases. The cumulative number of deaths in the metro due to Covid-19 stood at 3,108.

Nelson Mandela Bay was the epicentre of the second wave of Covid-19 in South Africa late last year after a new variant, now known as Beta, was first identified in the metro.

More than half of the Eastern Cape’s active cases (57%) have been registered in Nelson Mandela Bay.

The report further stated that 24 health workers in Nelson Mandela Bay had tested positive for Covid-19 after being vaccinated.

“Three cases tested positive in less than 30 days, two within or after 30 days but less than 40 days, 19 cases were after 40 days,” the report said.

During a briefing on Monday, Dr Patrick Madhlopa, an epidemiologist in the Eastern Cape Department of Health, said that the province, home to around six million people, had registered just under 600,000 people for Covid-19 vaccinations.

He said plans were being made to simplify the registration process, and community healthcare workers were assisting the elderly.

The department planned to add more sites each week to reach the goal of vaccinating 70% of the province as soon as possible.

“We have enough supplies. We had a small problem a week ago but it has been sorted,” he said.

Madhlopa said the Eastern Cape should be registering 23,000 people a day but was only registering between 4,000 and 6,000 daily.

“The disease is spreading and we must access vaccines as quickly as we can.”

The department was adding clinics as vaccination sites and aimed to have 7,400 clinics as soon as possible.

He said that, including health workers and teachers, the province had vaccinated 380,000 people.

“We can do better than this. We should be in the top three,” he said. DM/MC