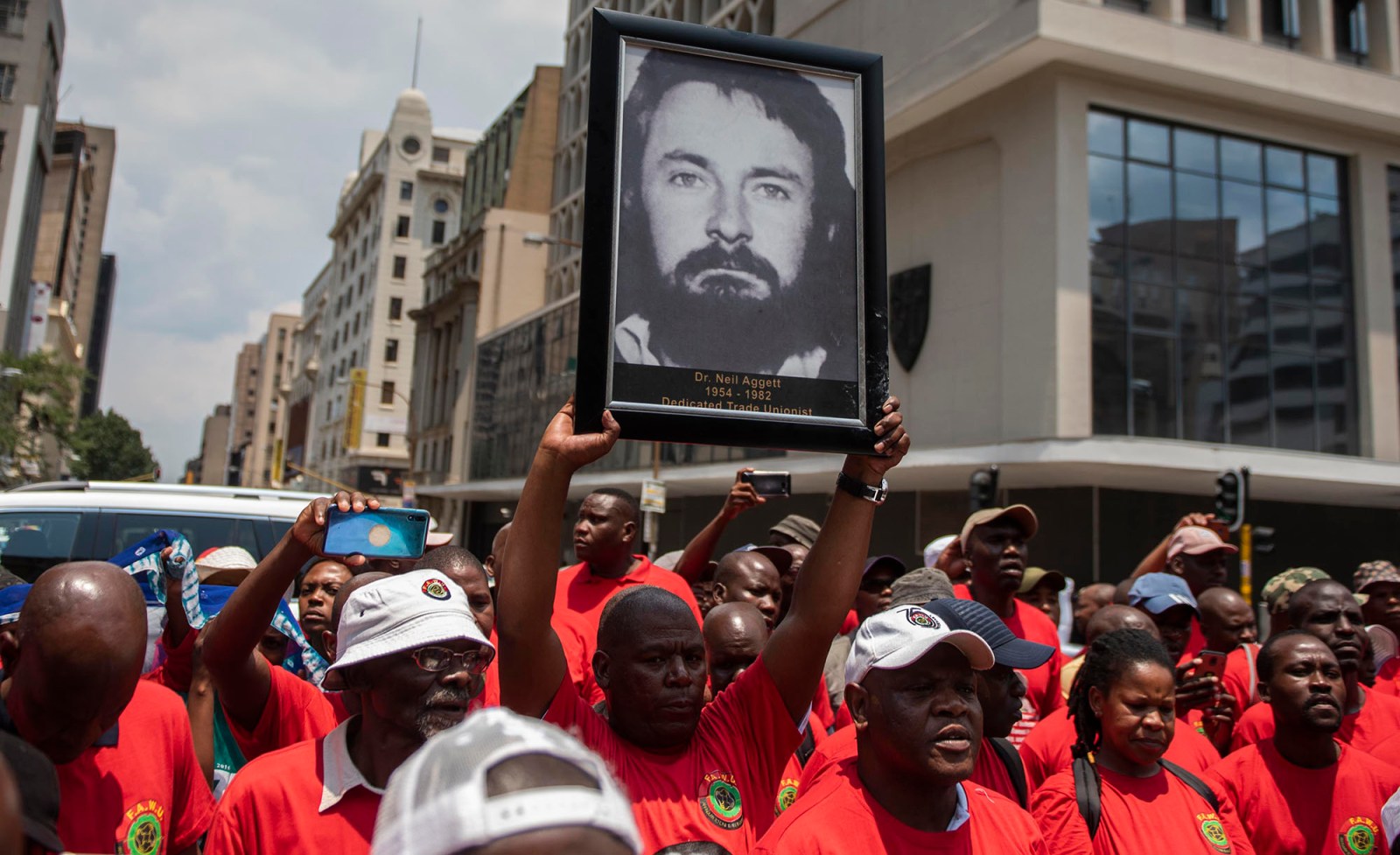 The original finding of death by suicide, and that no one could be held responsible for the young doctor’s death, is an affront to his family and a stain on history, advocate tells court in closing arguments.

The last words in the reopened inquest into the death of Neil Aggett were finally said and done when closing arguments wrapped up on Friday, 2 July.

It’s a milestone, marking the inching forward of the court processes that started in January 2020 with the intention to set the record straight surrounding Aggett’s death in detention in 1982; to determine consequences and culpability nearly 40 years later; and to offer some form of justice, maybe some closure, too, for Aggett’s family and friends.

In his summing up, Advocate Howard Varney, acting for the Aggett family, stressed the family’s continued assertion that Aggett, a 28-year-old doctor and trade union organiser at the time, was murdered after being detained by Security Branch police in November 1981. Aggett did not commit suicide, there was foul play and his death by hanging in the John Vorster Square police cells came about as a result of the “direct acts” of Security Branch officers, Varney said.

He added that should the court find that Aggett died by suicide, it had to be induced suicide arising from Aggett’s prolonged detention of 70 days and sustained assault, torture and trauma inflicted on him in during the weeks, days and hours leading up to his death on 5 February 1982.

Both Varney and the National Prosecuting Authority’s (NPA’s) Advocate  Jabulani Mlotshwa argued that the forensic testimony presented in the reopened inquest pointed to a conclusion that Aggett could not have climbed his cell bars in the second floor of the John Vorster Square police station to hang himself. More likely, they maintained, is that evidence presented suggested that Aggett’s hanging was staged after he was rendered into a state of unconsciousness or low consciousness.

Along with this forensic testimony, Mlotshwa argued that had Aggett committed suicide, his chief interrogator, Lieutenant Steven Whitehead, and Sergeant Paul Erasmus (who testified in 2020) would not have gone to the extraordinary lengths they did – including at one point gaining illegal entry into Aggett’s parents’ home – to try to find “evidence” that Aggett had suicidal tendencies.

Whitehead died in April 2019, just days before the NPA announced the inquest would be reopened. This followed years of inaction from the NPA around reopening the inquest into Aggett’s death, which was among about 300 cases involving deaths and disappearances of anti-apartheid activists that the Truth and Reconciliation Commission had recommend for further investigation in 2003.

Whitehead, dead at 62, reportedly from cancer, went to his grave without having to answer in a courtroom. Over the past 18 months though, he has been cast by his former colleagues as an upstart, willing to bend the rules to climb the ranks and to prove himself in the Security Branch. He was described as a party animal, a boozer and a daddy’s boy and was regarded as untouchable, being on the receiving end of privilege and protection through nepotism.

Mlotshwa also said Whitehead had a fixation with Aggett, a blinding obsession almost, that made his cruelty towards the young doctor explicit, although evidence presented to the court showed that Aggett was not involved with a banned organisation or any underground organisation – he was interested in fighting for workers’ rights, which wasn’t an illegal activity.

But Whitehead and others ensured his torture in detention included electric shocks, beatings, sleep deprivation and physical and verbal abuse over an extended period – hallmarks of his interrogation and efforts to extract a confession from Aggett.

The court also heard that Whitehead and the head of the Security Branch at the time, Major Arthur Conwright, were likely out to prove that they were close to piecing together a case that would be as explosive as “the next Treason Trial”. It would be a significant breakthrough to quash an uprising against the National Party regime.

Whitehead and Conwright, both now dead, left it to their colleagues that could be tracked down over the past few years to take the stand in the reopened inquest.

Testimony these former cops gave over the past 18 months was almost uniformly marked by a refusal to divulge specifics, a defence of foggy memories lost to the passing decades, or a portrayal of close and cosy relationships with detainees who were well cared for. They said if torture or abuse had occurred they never heard or saw it happen and they never took part in any acts of torture or violence themselves.

They also gave testimony of oaths of silence among the Security Branch members and acknowledged that members were an inner sanctum within the police and operated with their own codes and culture. Testimony was given that this routinely included the likes of cover-ups, falsifying registers and documentation, rigging identity parades and “not splitting on each other”.

Mlotshwa and Varney, in their separate closing statements, called these witnesses “unreliable”, “brazen liars” and “conspirators in cover-ups and suppression”.

Varney’s recommendation to the court was that the findings in the original inquest, that Aggett died by suicide and that no one could be held responsible for his death, be overturned.

“It is a ruling that is deeply hurtful and an affront to Neil Aggett’s family and friends. It remains a stain on history and the Security Branch officers must be held to account,” he said.

Varney asked the court to recommend that in addition to a charge of perjury that Nicolaas Deetlefs also be charged for Aggett’s murder. This Varney said is based on Deetlefs’s evidence that he considered Aggett a suicide risk but even so failed to notify the officer in charge of detainees or to report his concerns about Aggett’s wellbeing to anyone who could have put in safeguards to protect him from self-harm.

“He was acutely aware of what Conwright and Whitehead were doing and had a heightened legal duty to act, but he didn’t,” Varney said.

Varney also called for the courts to ensure that Security Branch officers Joseph Petrus Woensdregt, Daniel Elhardhus Swanepoel, Roelof Venter and Eddie Chauke be made to “face consequences for their brazen lies” to the court.

In his closing arguments, Advocate Stephanus Coetzee, acting for Martin Naude, Venter and Deetlefs, centred on Whitehead as “the main person” involved with Aggett’s interrogations, not his clients. He said officers like Naude and Deetlefs were only pulled into Aggett’s interrogation as stand-ins and for short periods. Deetlefs, he said, spent just nine hours with Aggett and Venter had no direct interaction with the activist.

Coetzee and Advocate Ashika Ramlaal, acting on behalf of Woensdregt, Johannes Visser and Swanepoel, maintained that the clue to knowing what led to Aggett’s death comes down to the 15 hours before it occurred. It was at this time that Aggett made a complaint about a particularly severe interrogation he had suffered on 4 January 1982. He named Whitehead as well as a Sergeant James van Schalkwyk as the men who tortured him, as Chauke watched.

Coetzee said Aggett was at the point of filing the complaint “not under duress” and had “regained enough self-confidence to confront his abusers”. It demonstrated, Coetzee argued, that what came before the filing of the complaint could have no bearing on what caused Aggett’s death 15 hours later. Ramlaal also made this submission.

Coetzee also said Deetlefs would not have been able to report Aggett as a suicide risk because of “hierarchies of power and line functions” in police reporting protocol. He also argued that Deetlefs had not misled the court even when he repeatedly said he couldn’t remember specifics. Coetzee said it would have been more suspicious had Deetlefs remembered every detail after nearly 40 years.

“At best the court can come to a probable finding but there is no evidence of direct murder,” Coetzee said.