An artist’s journey coloured by memories of freedom 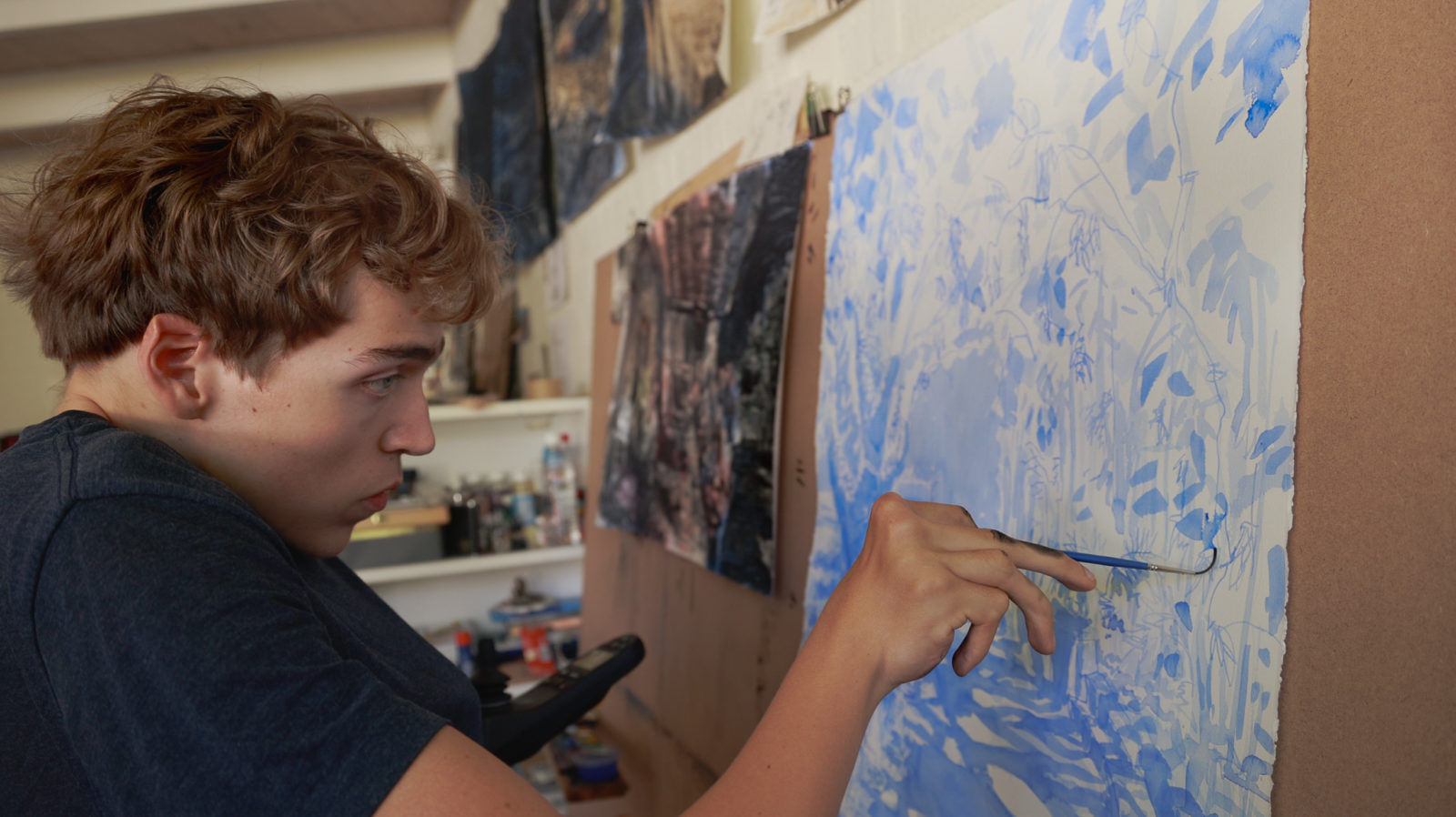 A combination of coffee, charcoal and watercolours gives artist Michael Beckurts’s work a quality as haunting as it is dreamy.

In his portfolio there are some landscape paintings. But even with the seemingly ever-present urge to categorise and position artists, Michael Beckurts is not strictly what you’d call a landscape artist. His current body of work features various vistas; landscapes, holiday beach scenes and urban café scenes set in Cape Town, evoking a sort of casual good-life vibe, akin to some moments in the work of the prolific architect, painter and illustrator Lucie de Moyencourt.

That is not to say he has cribbed de Moyencourt’s sketchbook, as it were. Other than the fact that Cape Town features prominently in their work, and both have hung solo exhibitions on restaurant walls, there are no significant similarities. Where she illustrates detailed sketches of scenes with an almost photographic attention to detail underpinned by a seductive nostalgia, his take on the city comes across darker and uneasy, largely informed by a mixed-media technique that combines watercolour paint, ink, charcoal and coffee. And while she is established and celebrated, the public-facing part of Michael Beckurts’s artistic journey is in its nascence.

As for the moments he chooses to commit to paper, they are true to his perspective, and his memories. “It’s the connection I have to the place, and the human connections I experienced there,” says Beckurts. Among his landscape-art-leaning paintings, one might spot several rural Knysna scenes. “It’s where my grandparents live. So obviously, there’s a connection automatically; it’s a place that I’ve been to many times, from childhood and playing in the mud as a little boy or whatever, it’s a nurturing kind of environment.”

A little closer to the city, there’s a scene from Woodstock’s Old Biscuit Mill, which is the location of Cape Town Creative Academy, where he is currently in the final year of his studies. It is also the location of the Test Kitchen, the restaurant where his work now hangs, thanks to a chance meeting with co-owner Sandalene Dale-Roberts. Says Beckurts: “I think it was in first year, I was waiting for lectures to start. I was a bit early and I was in the square and drawing in my book. And Sandalene shimmied over in her bright tracksuit. She peeked over my shoulder and asked: ‘What are you drawing? I’d love to see.’”

He has been painting for more than a decade, but he is only 20 years old. “I have always been painting with watercolours from a very young age. Initially, it was a form of rehabilitation for me after my operations to try and strengthen my fine motor skills,” he explains. Beckurts has a congenital musculoskeletal condition and gets around on a motorised wheelchair. A position which partially informs his ability to draw completely from memory.

“Because I use a wheelchair, being aware of my surroundings is a necessity. I have to intentionally observe and remember obstacles like kerbs, steps and doorways to orientate myself. While my physical limitations are restrictive, they have forced me to adapt and find my own style.” In fact, his entire body of work currently hanging at the Test Kitchen was created from memory in the last quarter of 2020, where, like most, his movements were limited by lockdowns, and travelling to different locations to draw was not an option.

While that dependence on memory rather than photography or being in an outdoor setting undoubtedly adds to the abstraction and dreamy feel of his work, it is perhaps his use of mixed media that sets many of his drawings apart. It is also a combination that tells the story of the gradual development of his technique since he started working with watercolours as a child, and later towards matric, when his teachers encouraged him to keep exploring charcoal even after he had moved on to tertiary education.

“I decided in January last year to make something bigger, to buy big paper for the first time, you know, and spend 100 bucks, which was quite a lot of money, in my mind, to spend on a piece of paper. But I wanted to push myself to draw bigger because physically I hadn’t really challenged myself like that before. We’d just returned from Knysna to see my grandparents. Being back in the city, I was missing the freedom of the natural environment, so I just started painting on this big paper with watercolours as I normally do, and then I felt it needed some darker elements to add some contrast. I decided that charcoal would be the best way, also especially because we saw a lot of charcoal on the farm as it was very badly affected by the Knysna fire. And that was what was in my mind; trying to really connect with the place, from a different place, by trying to use the elements that I remembered like the charcoal from the burnt trees,” he explains.

Eventually, he would carry on experimenting with the combination of watercolour and charcoal in various other scenes and paintings, including city scenes. After the charcoal came the coffee, an idea inspired by the work of artist Themba Khumalo.

“While in Grade 12 I was tasked to make work inspired by another artist’s style. And we actually went on a tour to the Cape Town Art Fair. I took some photographs of paintings by Themba Khumalo, a Johannesburg-based artist. I actually DMed him on Instagram and I asked what materials he uses and he told me he used charcoal, coffee and etching. I asked if I could use the coffee technique in my project and maybe send him a photograph. And we kind of connected like that. And we’ve still remained in contact. I started combining charcoal and coffee after that. The coffee adds warmth, but I think what kind of adds something new for me is the use of watercolour,” says Beckurts.

His Knysna paintings are located in Karatara, a rural part of the Knysna local municipality. They undoubtedly speak to its natural beauty; Beckurts also says when he thinks of his visits he is reminded of one of the few places when he has the freedom to be outdoors on his wheelchair unaccompanied. Yet, on the other hand, Karatara is also infamous for poverty among many of its residents; an experience that is less warm than the Karatara of Beckurts’s experiences and memories. And the artist whose coffee technique inspires Beckurts, Themba Khumalo, uses the combination of charcoal and coffee in a way that imbues his work with an uneasy foreboding. As per the gallery bio on Khumalo’s work: “These renditions portray pieces of land as witnesses to the dispossession, illegal occupation as protest, loss of hope and yet through the artist depicts land as refuge, a space of faith and healing.” Yet a similar technique with the addition of watercolours and Beckurts’s own lived experience speaks to notions far more romantic.

Perhaps in these paradoxes lies a reminder that not only can the work never be truly separated from its creator, but also that beyond technique, beyond the walls where the work hangs – gallery walls or the walls of a popular eatery in Sea Point such as Kleinsky’s where De Moyencourt’s solo exhibition once hung, or indeed the walls of a super-exclusive restaurant such as the Test Kitchen – it is only the creator’s perspective and lived experience that ultimately give each work its particular truth. DM/ML

This week we’re listening: On hosting the Olympics in a pandemic, and what could have been

Azania: A music-meets-storytelling production about search for freedom