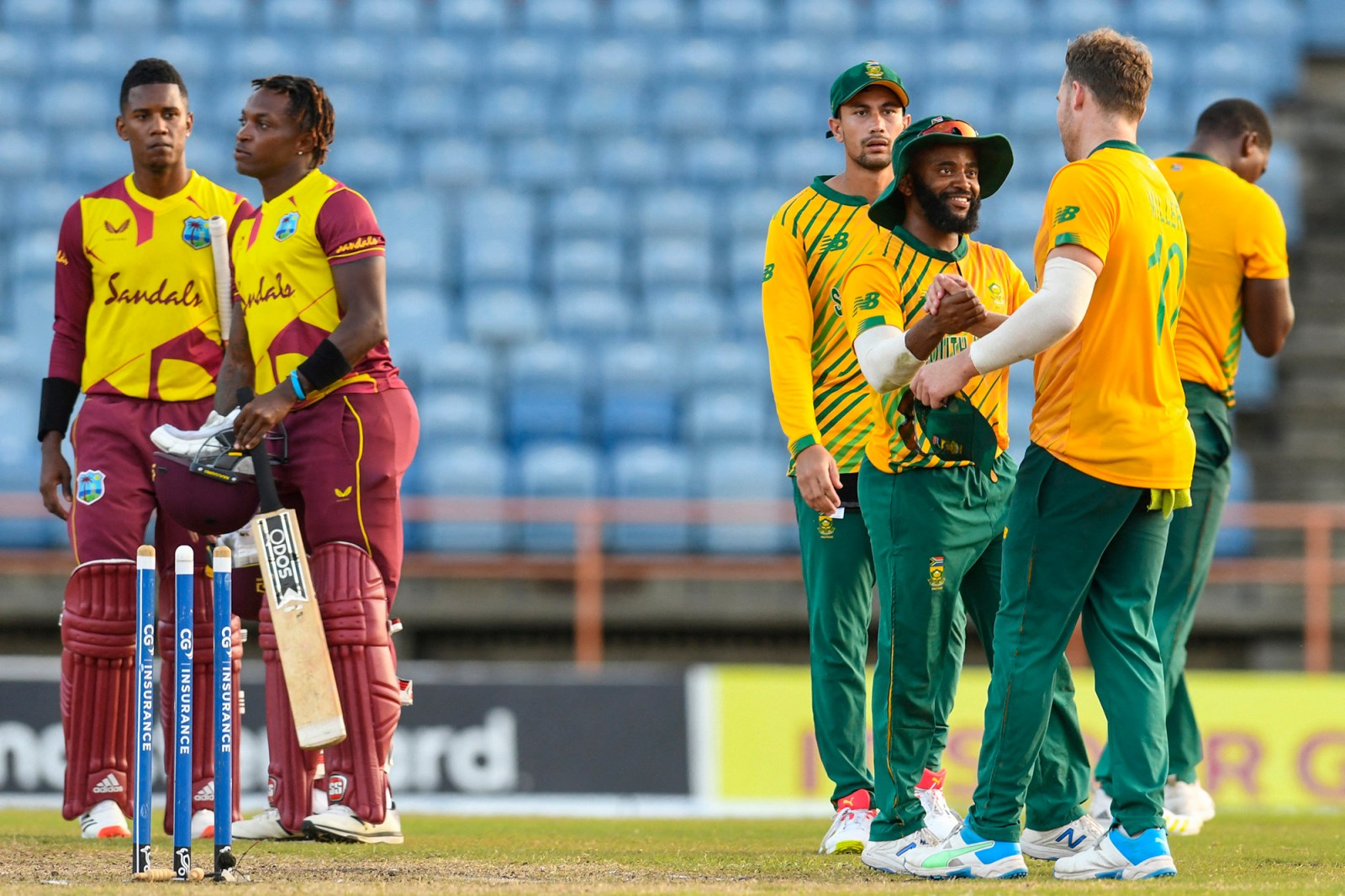 There is evidently much more work that needs to be done by the Proteas as they build-up to the T20 World Cup. However, their tight series win over the West Indies has some positive takeaways.

South Africa sealed a confidence-boosting series victory over the West Indies on Saturday.

Temba Bavuma’s men clinched the series 3-2 when they won the final match by 25 runs at the Grenada National Cricket stadium on Saturday. It was the first victory of Bavuma’s tenure as captain since he took over the reins as captain in March.

A match-winning, 128-run partnership for the second-wicket between Quinton de Kock and Aiden Markram set up the visitors’ road to their final score of 168 for four. De Kock made a 42-ball 60 while Markram returned a career-best score of 70 off 48.

The victory was also the first in this format for the Proteas in two years. The last time Mark Boucher’s side was victorious in a T20 was in March 2019 when they whitewashed Sri Lanka.

The triumph over the reigning T20 world champions was less emphatic than that last win on the subcontinent, but it completed a fruitful tour for the Proteas. This follows the Dean Elgar-led Test series sweep, where the Proteas notched up a 2-0 win in June.

Despite this latest success, Boucher’s side will have to wield the willow more efficiently if they are to make an impression at the T20 World Cup this year.

Throughout the five-match series, the South Africans failed to go past the 170-run mark.

The lone standout batter was opener De Kock. The 28-year-old accumulated 255 runs during the series, including three half-centuries. The only other Proteas batters to navigate past the 50-run mark in the series were Rassie van der Dussen (56) in the opening match, and Markram (70) in the series decider.

“There are a couple of things in our game that we know can be much better. We would like to finish our innings better, but just because someone is out of form in one series in tough batting conditions does not suddenly make them a bad player,” said Boucher.

The dry conditions the Proteas coach is referring to are in the arid United Arab Emirates, where the delayed T20 World Cup will begin in October.

You spin my world around

The Proteas owe the victory over the Windies to the spinning prowess of Tabraiz Shamsi and George Linde, who stifled the home side’s hard-hitting batters.

Shamsi walked away with the player of the series accolade after collecting seven wickets across the five matches at the outstanding economy rate of four runs per over.

“I’m somebody that likes to do a lot of homework behind the scenes… watch a lot of footage of the guys [batting]. But no matter how much preparation you can do, I would’ve never in my wildest dreams thought that I would have the series I had,” said Shamsi.

“It’s something you can’t plan to go this well. All you can do is do your work behind the scenes and hope for the best. After the first game that we played nobody really gave us a chance. People were calling for 5-0 and stuff like that.

“Yes, we are very inexperienced on the international scene. But it doesn’t mean that there’s a lack of skill.”

The victory was welcomed by the Cricket South Africa (CSA) hierarchy, which hopes it will bolster confidence within the camp as the Proteas head off to Ireland for their next assignment.

Boucher’s men take on the Irish in three One Day Internationals (ODIs), as well as another three T20 ties. The ODI series begins on 11 July.

“Nothing breeds confidence like success and we look forward to their gaining further momentum when they head to Ireland for the next leg of their tour, with the end goal of the ICC T20 World Cup towards the end of this year,” CSA acting chief executive Pholetsi Moseki stated.

“This achievement follows the similar one of the Test squad, also under new leadership in the form of Dean Elgar, and augurs well for our long-term target of getting the Proteas back into the top three across all formats of the international game.”

The hearings aim to determine the causes, nature and extent of racial discrimination and lack of transformation in all SA cricket structures since unification.

Advocate Dumisa Ntsebeza was appointed by CSA as the transformation ombudsman. He will have until 30 September to complete his investigations and present his final report to the CSA board for its consideration. DM