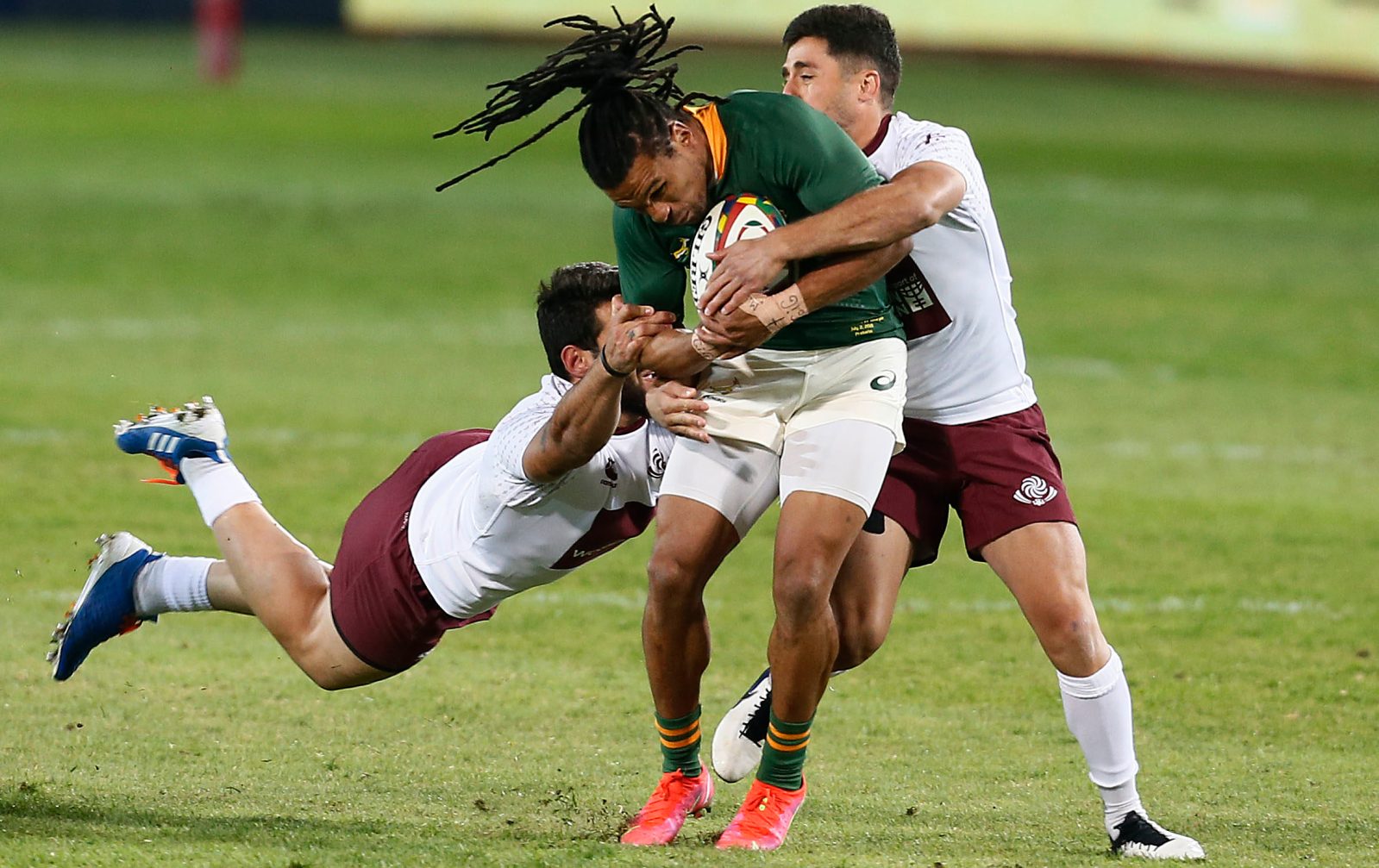 Rosco Specman of South Africa (Springboks) in action with Giorgi Kveseladze and Tedo Abzhandadze of Georgia during their first test at Loftus Versfeld in Pretoria on 02 July 2021. Photo: Felix Dlangamandla/Daily Maverick

They might not have played for 20 months but it only took 30 minutes for the Springbok machine to start purring again as they scored a comprehensive 40-9 victory over Georgia at Loftus Versfeld on Friday.

The final margin of victory was never going to matter as much as the performance for new Bok coach Jacques Nienaber. And on all counts, he could be satisfied with his team’s first outing since winning the final of Rugby World Cup (RWC) 2019.

Six tries without conceding one, set-piece dominance and growing assurance in the match after an expected scratchy start, were all positive signs. There were no apparent serious injuries either although lock Eben Etzebeth left the field at halftime with a rib injury as a precaution.

Just as success at RWC 2019 was built on a supreme scrum, smooth running line-out, watertight defence and a strong bench, so too was victory in Friday’s contest against the abrasive eastern Europeans.

It took almost half an hour for the Boks to start exerting constant pressure on Georgia after a patchy opening littered with handling errors and poor options. The visitors put the world champions under pressure at the breakdown in particular, and were rewarded with several penalties, which added to the disjointed opening.

“We didn’t have a marker for 20 months, but now we do. We can start building and working from this,” coach Jacques Nienaber said after the game.

“Our discipline was poor initially but that was credit to the pressure Georgia put us under and that led to the penalties.”

But once South Africa settled and started turning the screw, Georgia could only limit damage because they simply didn’t have the weapons to stop the green wave advancing to their line.

The Lelos, as Georgia are known, started well with an early penalty but were quickly rocked back when debutant Bok wing Aphelele Fassi skinned the cover defence with ease. It was Fassi’s first touch of the game and that gave the Boks an early 5-3 lead but it only served to spur the tourists on.

They won numerous breakdown penalties as they put the slightly passive Bok defence under pressure. Flyhalf Tedo Abzhandadze added two more penalties to his earlier strike and by the half-hour the visitors improbably led 9-5.

But the Boks showed no signs of panic. Once they started winning collisions the penalties followed. Instead of kicking for goal, captain Siya Kolisi opted to put the ball into touch and set up rolling mauls.

Initially, Georgia’s defence, by hook or crook, kept the Boks at bay. But their constant infringing eventually forced referee Mike Adamson to send flank Beka Saginadze to the sin bin. With 14 men on the field the Boks pounced.

First hooker Bongi Mbonambi crashed over for a try from the back of a maul and then from the restart, the Boks struck from deep. They worked the ball left where Fassi played a crucial role, taking a difficult pass from fullback Willie le Roux, finding his balance and chipping ahead where a supporting scrumhalf Cobus Reinach collected and scored.

The 10-point halftime deficit was perhaps flattering but after the break it was all South Africa as the forwards rampaged through set-pieces. The backline struggled for cohesion for the most part and a few gilt-edged chances for wing Rosko Specman were wasted.

By now though Georgia were reduced to almost exclusively defending – a job they did well. But they couldn’t plug all the gaps legally and the penalty count mounted, resulting in more mauls and scrums and more tries.

No 8 Kwagga Smith scored off the back of scrum, replacement scrumhalf Herschel Jantjies sniped over from close and reserve hooker Malcolm Marx added another from a maul and the final try of the evening.

Afterwards, captain Siya Kolisi said their only focus was on Georgia and that they were not trying to hide anything from the British & Irish Lions for their three-Test series starting soon.

And it’s true. The Boks played from the same blueprint they used at RWC 2019 and produced another positive result. The template is there for all to see.

Finding ways to stop it though, especially as the Boks will improve as they play more, is not as easy to fathom. DM