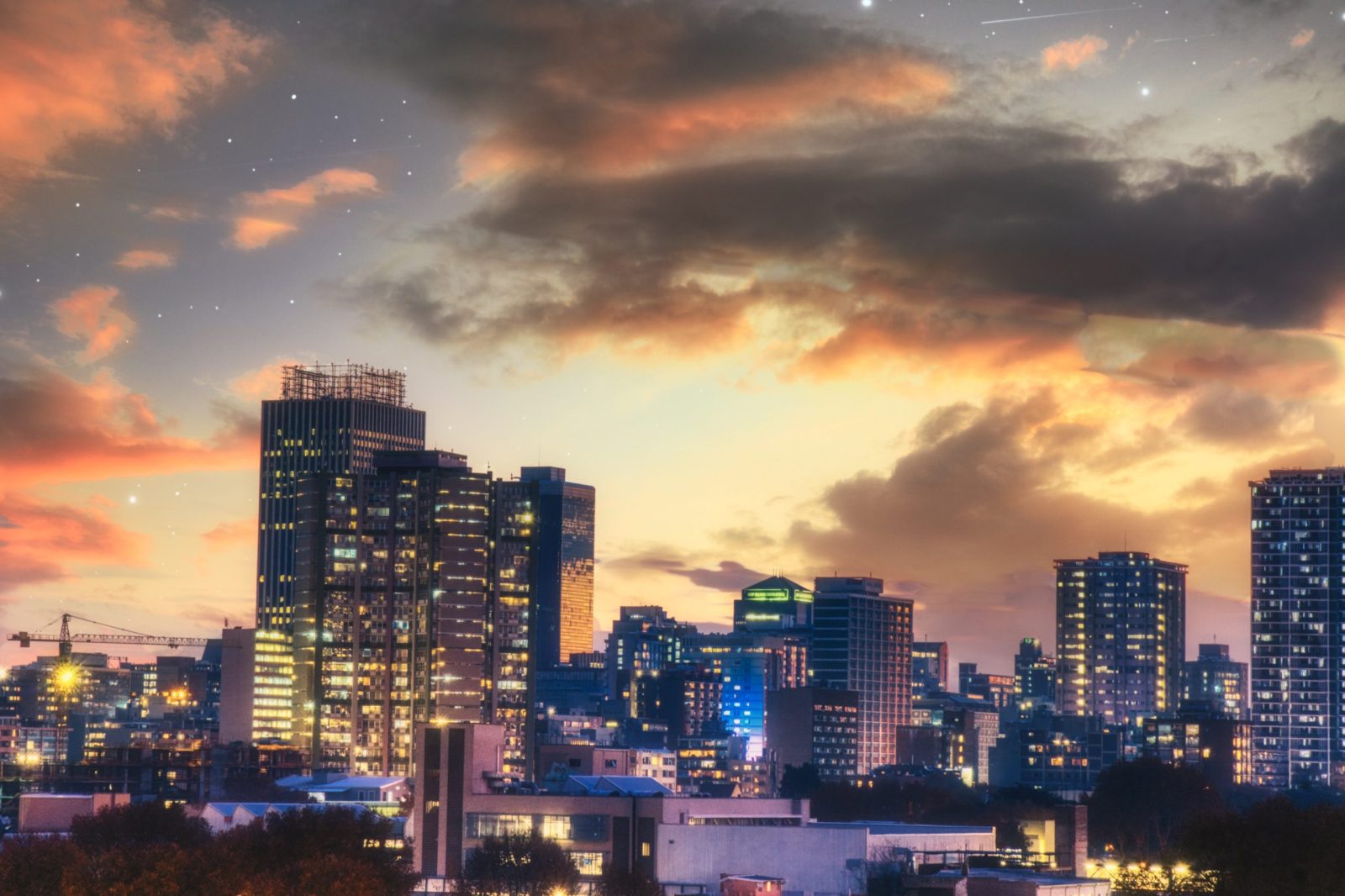 (Photo by Thomas Bennie on Unsplash)

If we unpicked our rich fabric that is Jozi and pulled out the foreign or other strands, we’d be so much the poorer of course but we’d be unrecognisable. As food, these strands are deliciously accessible.

Jozi is full of people from other places. Almost everyone or everyone’s family is originally or newly from somewhere else. Jozi is the meeting point, like an international restaurant. It has become one of the most diverse food cities in the world.

In one single Jozi morning just before the latest lockdown restrictions, I see Ethiopians, Madeirans, Zimbabweans, Syrians, Chinese and Mozambiquans. I also see South Africans whose forefathers too, really came from other places, relatively near or far. That’s just a sample of one part of one day in Melville and its immediate surrounds. And all these people eat something.

Owing to the Difaqane and then even more subsequent routing out of indigenous or previously settled people by Mzilikazi, who once had his headquarters where the nearby Union Buildings stand today, the people of what is now Jozi and the greater surrounds were displaced, separated, landless. Those who found themselves heaved up here were hungry. They were the disadvantaged when Boer settlers began arriving with their other advantages of imported food and enviable ready social structures like kith and kin in numbers.

When gold was discovered shortly after that, other people, all kinds of others arrived and, as we know, many stayed. All of them ate. Many tried to eat and recreate the food that they knew from wherever they’d come.

I’ve recently written about Ethiopian food as experienced in central Jozi but there are popular mainstream Ethiopian restaurants at places like the arty-chic 44 Stanley, in Norwood, in Maboneng, Yeoville, Bruma and Kensington.

Many Jozi people have an opinion about Ethiopian food. They know about it, many love it, have probably enjoyed it on injera at a party or restaurant. Oddly, they may not know many or even any Ethiopians though. Ethiopians have emigrated here in great numbers over the last 30 years to escape political and economic hardships.

Luckily food is a kind of ambassador. It can teach us respect, empathy, tolerance of others and inspire curiosity about them. Other people are those who we have not yet recognised for various reasons like suspicion, fear or ignorance. However, their food is often absorbed more readily. It is very often the speedier route to erstwhile cold or blank hearts.

Madeirans came to us over a long period, from the beginning of the 1900s until the mid-century. They’d been, for the large part, under the fiscal thumb of Portugal and were escaping impoverishment and severe overcrowding. They brought their own cuisine, which had been separate from Portugal’s for five centuries before they arrived here.

They form the largest group of Portuguese immigrants to Jozi. Mainlanders from Portugal formed a lesser part, who came at the political invitation of the then South African government, to swell the numbers of white citizens between the two world wars. Then in the 60s and 70s, some Portuguese speaking ex-colonists removed themselves from Mozambique when it became independent.

Portuguese food is regarded as a great favourite by many Jozi people. However, Madeiran, more country-style food, somehow has become subsumed within it these days. Even the Madeiran restaurant 1920 has gradually been adding more commonly known, ubiquitously known Portuguese dishes, like the Mozambiquan-Portuguese man-fave, piripiri garlic prawns, to its menu, to better please those unfamiliar with Madeiran food. I think it is something of a pity.

We do tend to go for the most obvious elements in cuisines, when they are those of others rather than our own, demanding what frustrated chefs call the “lowest-common-denominator dishes”.

Zimbabweans constitute the second or third most immigrants into Jozi. It’s not always a popular situation but many many of our Jozi cooks are Zimbabweans. We use quite a lot of groundnut and groundnut paste, a bit like peanut butter, in our marogo, vegetable and meat stews, but Zimbabweans even add it to porridge in the morning with butter and it’s catching on. Their wild mushroom Nhedzi soup is one of the other remarkably tasty things I can think of immediately, too.

There might not be many eateries solely devoted to Zim food but there are shops like Fugie’s Zim Products in Ferndale where you can get Tasty&Sumptuous packs of bean leaves, vegetables and rape as well as the favourite Colcan pies and tins inter all the Zimbabwean local label goods. In Rosettenville is Zimbabwean Groceries @Cost.

We can be xenophobic and inhospitable to others but their food is often welcome.

Syrian food is another good cuisine that could speak for the refugees. I went to my first and wonderful Syrian restaurant in Benoni but in Jozi there is Syrian Rose in Fordsburg. There are schwarmas there and also Syria’s own and different falafels. But I also see them making a Mexican version for people “because customers like them”. Really?

In Fordsburg I see many Syrians on the street, making food and in confectioners where I can often find Ma’amoul, divine date-filled pastries. I also learned something about Syrian spices for fruit pies including thyme and black pepper, which I’ve been using since with apple fillings.

Various Chinese peoples have been in Jozi since those early mining days. Even then, people were being nasty about them, as Others. During the First World War, when African workers were deployed from the mines, Chinese labourers were brought in from the south of their country. Many stayed on after the war and First Chinatown developed. More Chinese people came as paying passengers to do business, begin new lives. So it has been since, with Chinese people immigrating to Jozi from all parts.

Despite the exotic food, which Jozi people have grown to love (see my piece about Second Chinatown), the Chinese immigrants have always been regarded as Other to a degree. The Covid-19 stories have not helped today but, in 1891, the Chinese of gold mining Joburg, who were working as shopkeepers, launderers and market gardeners suffered a campaign against them by white traders. The claim was that they were posing a threat to white business. It was also said that they would “flock in”, taking over valuable property, be a menace to health and morals and they’d undercut wages. So there.

Among the lower classes in Braamfontein, Fordsburg and Vrededorp, they were popular instead, even without the food. There were at least 65 Chinese trading in Johannesburg in 1893, and they were popular with working class suburbs of Braamfontein, Fordsburg and Vrededorp because they sold goods in small, affordable quantities at cheap prices and they gave credit.

Even if most people still don’t know lots about the various kinds of Chinese food, Chinese restaurants have kept it pretty much intact and they abound.

Another group, Mozambican, was on the mines in the early Jozi days too.  Less unwilling than others to go underground and also because they stayed longer and worked harder, they were favoured as employees. The conditions under which they worked were nonetheless appalling. As to  other African workers, the food served up from the mine kitchens was very different to their home fare. No wonder the Mozambiquans introduced themselves, and eventually us, to chakalaka, a chilli-hot condiment they created to jolly up the bland and probably horrible non-Mozambiquan food.

Mozambiquan restaurants in Jozi today are usually about the kind of foods the colonials had to forsake and for which South Africans crossed the border, mostly prawns galore with Laurentina beers.

The more recent immigrants seeking jobs and less poverty than many currently have, are more interested in cassava and rice, served with whatever meats and vegetables they can get, or fish. Beans, chillies, peppers, garlic, potatoes, coconut and nuts work to help this cuisine taste wonderfully palatable to them and to our locals at the spaza type eateries Mozambicans open, highly unpopular as the people themselves very often are regarded as new neighbours and subject to xenophobia.

When we can understand what people eat and why and how, we are often softened in our attitude towards them. Sharing food is a wonderful pacifier, as history has shown.

Jozi is regarded as one of the word’s global cities, a world centre that is a primary node in globalisation. That’s what it is. It is our wealth. We are a city of Others.

It behoves us to delight in the foods too, the food of others. DM/TGIFood