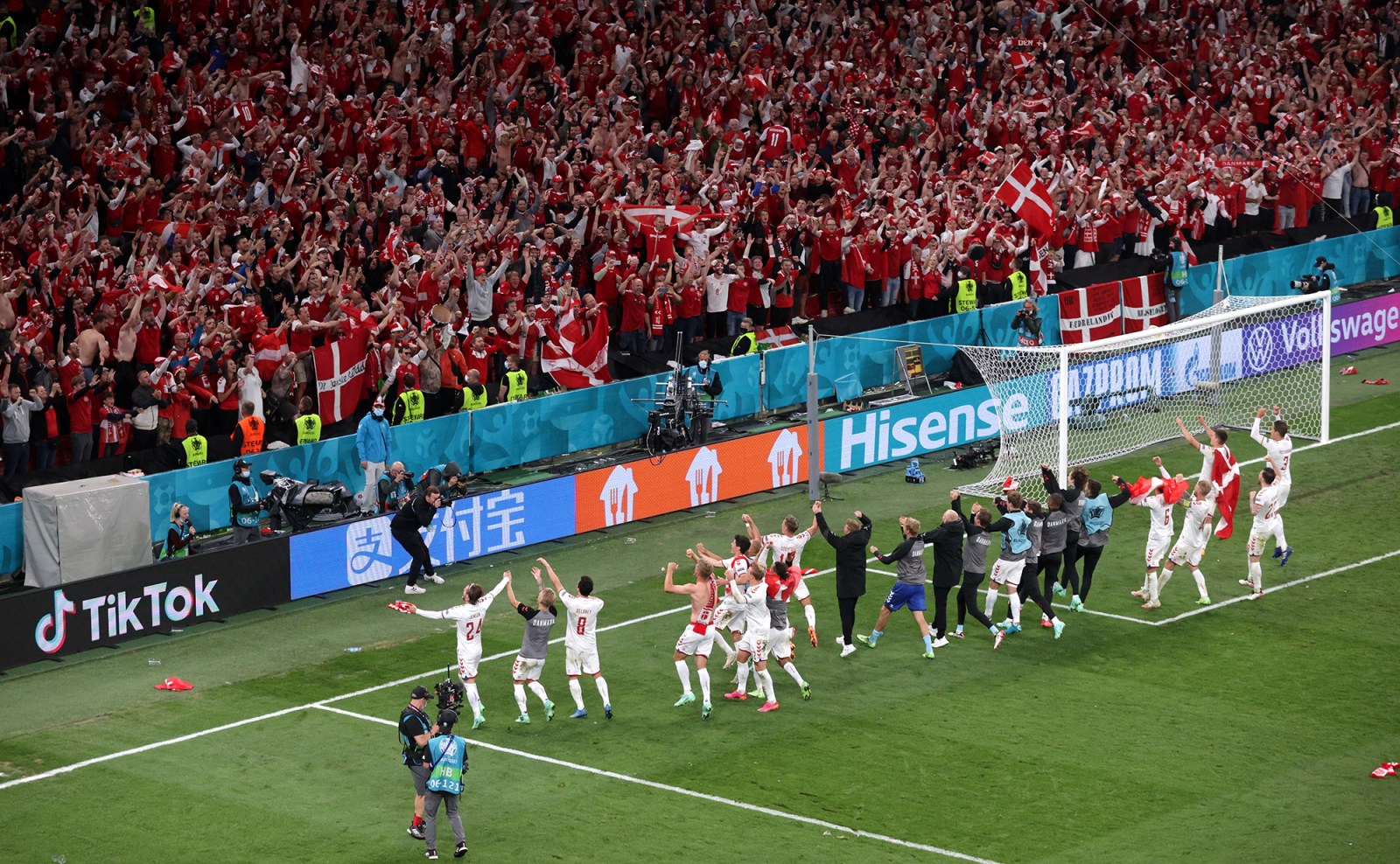 Players of Denmark celebrate with their fans after winning the UEFA EURO 2020 group B preliminary round soccer match between Russia and Denmark in Copenhagen, Denmark, 21 June 2021. (Photo: EPA-EFE/Hannah McKay / POOL

The last eight of the European Championship is upon us and is sure to continue with the outstanding and scintillating football that has been on display in the tournament to date.

Quarterfinal ties at Euro 2020 will see Spain take on Switzerland, two heavyweights in Belgium and Italy go toe-to-toe, the English taking on Ukraine, and Denmark looking to maintain their fairytale run when they meet the Czech Republic.

Of the last remaining eight teams, Denmark’s win over Wales was the most emphatic from the last-16 stage. The Danes brushed aside the Welsh 4-0 in a dominant and inspired performance across the board, thereby booking a date with the Czech Republic.

That result continued their Cinderella-like run in the tournament so far. The Nordic nation has shown admirable resolve to reach this stage, having been galvanised by midfielder Christian Eriksen’s recovery from a cardiac arrest.

On 12 June, while playing in Denmark’s opening group stage match against Finland, Eriksen collapsed in the 42nd minute as he was about to receive a throw-in. After he was stabilised and rushed to hospital, the Danes returned to the field, visibly shaken up by the ordeal.

They went on to lose that game 1-0, before following that loss up with another at the hands of tournament favourites, Belgium.

Despite those losses, the Danes’ single win of the group stage was enough to see them qualify ahead of the Finnish and Russians on goal difference. They thrashed the Russians 4-1.

When they walloped the Welsh with another four goals in the last 16, they set a unique record of becoming the first country to net four goals in consecutive games at the Championship.

The hero of that match, Kasper Dolberg, became the second Denmark player to score two goals in a knockout game at a major tournament after Henrik Larsen against the Netherlands at Euro 1992.

The Danes climbed all the way to the summit during that competition, edging out heavyweights Germany in the final to claim the ultimate prize in European football.

They had entered the tournament by default. Yugoslavia was disqualified as a result of the breakup of the country and the ensuing warfare there.

The Danes had missed out on qualification having finished as runners-up to the Yugoslavians. They were given just over a week’s notice to get a squad prepared for the showpiece.

Denmark rode on the coattails of that sequence of events, and sequentially became champions of Europe.

Almost three decades later they are in with a realistic chance to repeat history, propelled by the tragedy that befell Eriksen.

Should they manage to beat the Czechs, they will face either England or Ukraine in the last four.

“We have discovered that there are more important things in life than football. We have agreed on that and stand together. Not just us as a team, but the whole of Denmark,” Joakim Maehle said in the build-up to their clash with the Czechs.

One of the other quarterfinal matches will see what would make for a sumptuous final in any tournament — the robust Italians taking on the flamboyant Belgians.

Italy head into the clash in buoyant mood after extending their unbeaten sequence to a national record of 31 games, although they had to dig deep to overcome Austria 2-1 in extra time in the last round.

Roberto Mancini’s side boasts a 100% record so far in the tournament, as do the Red Devils. The victor in this tie will set a new record for the longest run of victories in the competition, qualifying included.

“Italy will be the toughest opponent we’ve met so far. They’ve had a good run of wins and it will be a nice challenge for us to end that sequence,” said Belgium’s hero against Portugal, Thorgan Hazard.

Whereas the tie between Italy and Belgium will be fairly balanced, England are expected to cruise past Ukraine.

The English head into the tie with the expectation from their ever-demanding fans that they will be one of the two teams contesting the final at Wembley stadium in London in one week’s time.

However, England coach Gareth Southgate has warned against complacency.

“There is this perception that all we’ve got to do is turn up, and we are on our way. We’re very clear now that the total focus is on Saturday,” said Southgate. “We have to prepare the game in the right way, and our mentality is critical.”

Before England’s clash with Ukraine, Spain will go toe-toe with Switzerland.

The Swiss are brimming with confidence after claiming the biggest upset of this Euro edition to date. They knocked out pre-tournament favourites France on penalties to book their place at this stage.

They face a Spanish side whose last performance, a 5-3 win over Croatia, showed their best and worst parts.

Luis Enrique’s men let a 3-1 lead slip in that game, forcing extra time. They finally finished off Zlatko Dalić’s side in extra time. Any similar slip-ups against the confident Swiss and they might not be so fortunate this time around. DM