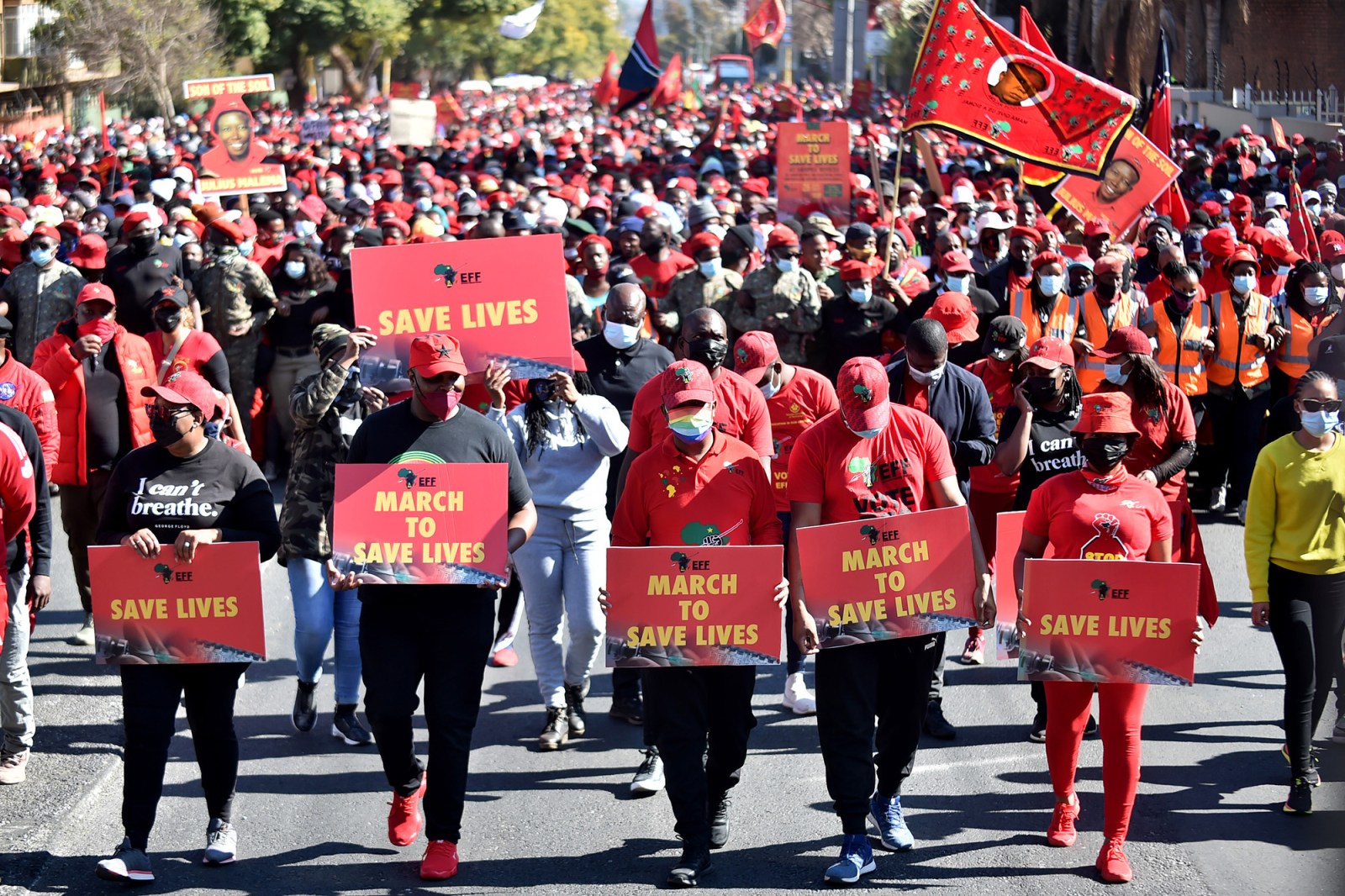 Members of the EFF march to the offices of the South African Health Products Regulatory Authority to demand that the organisation speed up the approval of Russia’s Sputnik vaccine in Pretoria on 25 June 2021. (Photo: Supplied)

With recent criticism levelled against the South African Health Products Regulatory Authority over the procurement of vaccines, the organisation has explained that it is not in its mandate to procure vaccines; that’s the government’s job.

People who don’t understand the role of the SA Health Products Regulatory Authority (Sahpra) have accused the organisation of “dragging its feet” over the registration of Covid-19 vaccines.

Sahpra board chairperson Professor Helen Rees convened a briefing on Thursday to explain how the organisation works and to address queries on how it goes about approving vaccines for registration and use.

The briefing came nearly a week after Julius Malema led an EFF march on the Sahpra offices, calling on the body to approve the use of Sputnik V and Sinovac vaccines in the fight against Covid-19.

Rees explained that Sahpra is a statutory body governed by two national acts, namely the Medicines and Related Substances Act and the Hazardous Substances Act. She said the regulator therefore had to act in a transparent, fair, objective and consistent manner. Sahpra was autonomous and operated independently, which was important because science was what guided its decision-making, said Rees.

Rees said Sahpra merely registered and regulated medicines, but did not procure them. That was the role of the government as it was a policy issue. She also reminded those at the briefing that there were 200 vaccines in the pipeline and that over time, more vaccines would be registered, but that they would still need to comply with Sahpra regulations and standards.

Sahpra CEO Dr Tumi Semete-Makokotlela outlined that regulatory decisions were made by the CEO through extensive consultation with internal technical experts as well as academic experts contracted to the regulator.

Should applicants be unsatisfied with outcomes, the acts governing Sahpra provide for an appeals process. Should that process still be unsatisfactory, applicants can launch a further appeal through the minister of health.

“The Sputnik V application is being processed under a rolling review process, meaning that we are processing their application as we receive the data. This vaccine is also being evaluated under Section 21, which enables us to authorise it for emergency use. Sahpra has held numerous engagements with the representatives of the two applicants for registration of this vaccine. To date, we have exchanged correspondence on several occasions regarding the data required for their application.”

According to Semete-Makokotlela, Sahpra is in the process of reviewing the Sinopharm and Sputnik vaccines. The Sinovac vaccine was at an advanced stage of review and a decision was imminent. She said the regulator evaluated all products sent to it, even if the government did not intend to procure them.

On the subject of vaccines being made available only to the government, Sahpra technical advisory committee member Dr Andrew Gray said that vaccine makers had indicated that they were willing to sell their products only to governments so that people did not monopolise access to vaccines.

“As a regulator with integrity, which places the interests of the country it serves and its people at the forefront of its decision-making, Sahpra is committed to acting responsibly and in accordance with its mandate at all times.

“Sahpra strives to be responsive in this time of crisis, ensuring that health products are timeously and appropriately assessed and authorised. We welcome any endeavour by civil society and political parties which can constructively assist Sahpra in meeting its mandate.

“We will authorise Covid-19 vaccines which meet the necessary standards of safety, quality and efficacy as soon as possible,” said Semete-Makokotlela. DM/MC