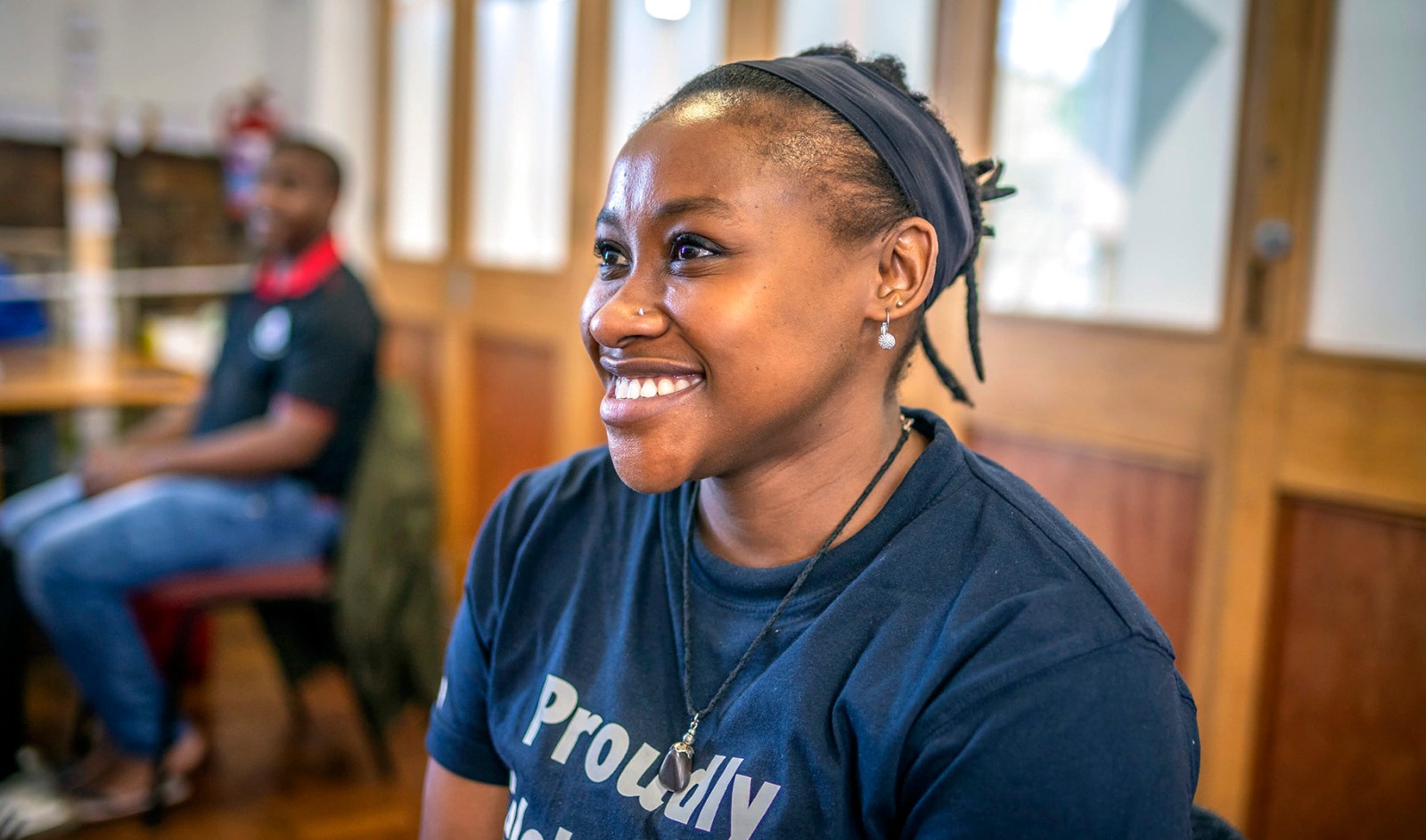 Thuli Mjwara, Inclusive and Affirming Ministries' process coordinator, is among those challenging religious homophobia through their NGO. (Photo: Open Democracy)

African activists show how churches can make space for queer people. Undeterred by threats and claims that they are ‘un-African’, these activists are making Christianity more inclusive.

Ecclesia de Lange, Greyson Thela, Thuli Mjwara and Hanzline Davids, who all live in South Africa, have good reasons to turn away from religion.

When De Lange, a former minister in the Methodist Church of Southern Africa, told her congregation that she planned to marry her same-sex partner, she was suspended, disciplined and fired.

Thela was just 16 when his mother brought an evangelical pastor home to “pray the gay away”. Mjwara’s mother couldn’t even bring herself to discuss her daughter’s homosexuality, but organised a number of prayer sessions to bring her “deliverance”.

Yet, instead of turning away, De Lange, Thela and Mjwara are challenging religious homophobia through Inclusive and Affirming Ministries (IAM), an NGO that aims to “catalyse faith communities to recognise and celebrate LGBTIQ people in Africa”.

“Religion is a key obstacle to address in advancing the rights of LGBTIQ people,” says De Lange, director of IAM, which was launched in South Africa 25 years ago and now works in nine African countries.

It’s slow and difficult work, and each meeting has to be carefully assessed to ensure the safety of IAM staff, who never work alone.

Aggression is relatively common. IAM staff have been thrown out of a meeting in Malawi and told not to facilitate a workshop in Uganda because their safety could not be guaranteed. Elections are a particularly volatile time, because conservative politicians often target LGBTIQ people in their campaigns.

“We have seen this in elections in Malawi, Zambia, Zimbabwe and Namibia,” says IAM process coordinator Hanzline Davids. A former reverend with the Uniting Reformed Church in Southern Africa, Davids resigned in 2015 out of fear of being discriminated against as a gay man.

Some churches in South Africa gave refuge to black communities when they were under attack during the apartheid era, but very few have spoken out or acted against the persecution of LGBTIQ people, says Thela.

“Why can’t they do the very same thing regarding gender identity and sexual orientation in today’s world, because people are getting raped and murdered?”

Not only do religious leaders fail to offer support, but many actively engage in homophobia and transphobia.

During these dialogues, IAM encourages a different way of reading the Bible. For example, the story of Joseph and his coat of many colours becomes a parable of the acceptance of difference.

“To open minds is to have a conversation in a setting where there is diversity,” Davids stresses. “Faith leaders will say that there aren’t any LGBTIQ people in their congregation. And we will push back and say: ‘Are you for real?’”

One of the most common claims IAM staff face is that homosexuality is “un-African” and “Western”.

Thela and Mjwara are skilled at using African history to show that LGBTIQ people have always existed and it was only when Western colonial laws were introduced that same-sex relationships were penalised. “I can give you stories about Queen Modjadji who had wives, African kings who had husbands, ‘eunuchs’. What is actually un-African is not my identity, but homophobia,” says Thela.

Traditional leaders also acknowledge that there have always been people involved in same-sex relationships, adds Mjwara.

To win the support of family members, some gay, lesbian and trans people have become traditional healers because “sexual fluidity” is acceptable in that context, she says. “A lot of people would say, the person has an ancestral calling [to become a traditional healer] and the ancestor that has called them is of a different gender and that is why they are gay,” she adds.

But if LGBTIQ identities were acceptable, she says, it would not be necessary for people to pretend to have this calling.

Although progress is slow, De Lange is encouraged by the shift in attitude towards same-sex relationships in the Methodist Church, which has a large constituency across southern Africa, and the Dutch Reformed Church, which operates in South Africa and Namibia.

“After many years of debating same-sex relationships, all of a sudden, last year, the Methodist Church changed their policy, and now celebrates same-sex unions on all levels, from the clergy right down to the congregants,” says De Lange of the church that cast her out in 2010.

She also points to the establishment of a regional network in southern and east Africa and “dipping our toes into west Africa”, as evidence that IAM’s work is starting to make a difference.

Meanwhile, David highlights the 2019 decision by Botswana’s High Court that the criminalisation of consensual gay sex in its penal code was unconstitutional.

However, IAM has struggled to engage with evangelical Christians, who believe in a literal interpretation of the Bible and also have huge financial backing.

“We celebrate diversity and believe that all of creation reflects the image of God. But evangelicals try to change what God has created by saying that it’s damaged, or there’s something wrong with it,” says De Lange.

The late controversial Nigerian televangelist TB Joshua, who “exorcised” the “demon of homosexuality” from congregants, used fear to force people to be who they are not, she adds.

“There’s no love, no respect. I come from an evangelical background and I know that many of the sermons are soaked in fear. Why does he pray for a gay person to become a heterosexual? According to this view, diversity is not tolerated. You have to conform to the dominant view, therefore you have to deny yourself, to be okay with God.”

De Lange tried for years to deny her sexuality after being told that she could not be a Christian and a lesbian. She even joined Exodus International, the “ex-gay” Christian movement that eventually closed in 2013 with an apology for trying to “convert” LGBTIQ people to heterosexuality.

Thela has also wrestled with self-acceptance: “I had an internal conflict with myself, where I tried to pray the gay away from my own self. The message has been massaged into our heads to look at yourself as the problem, because a man standing in the pulpit says so.”

Mjwara says: “You should be able to come into a space and confidently say: ‘I’m a black queer woman of faith.’ Christianity is about faith. It’s about love. It’s about having that brotherly and sisterly support. The minute it becomes about hate and policing, it is not Christianity.” DM/MC