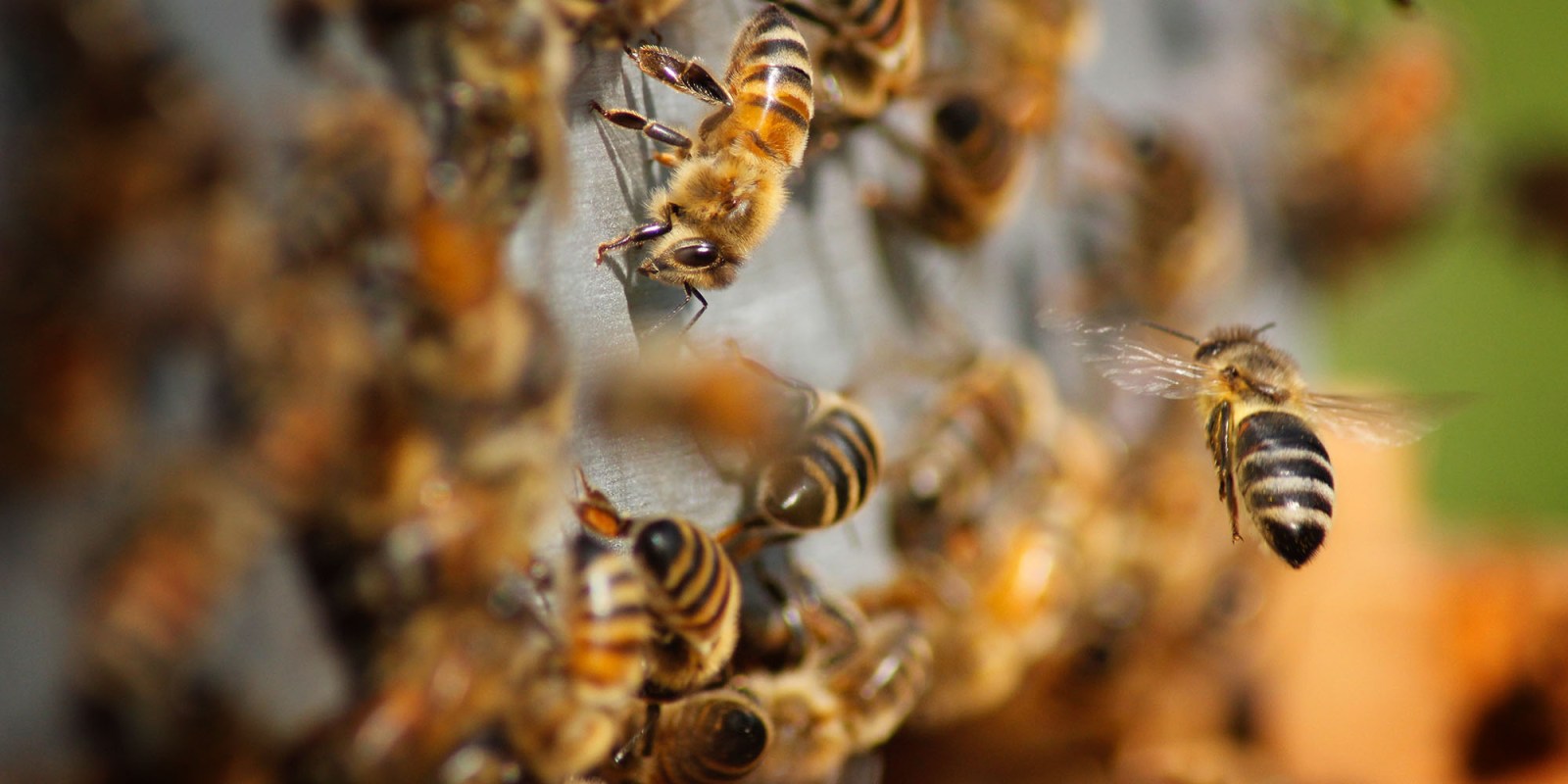 Glyphosate, which is used extensively in South Africa, causes deformation to the reproductive shape of plants, which could have wide-ranging effects on pollinator species, foraging animals and people, experts say.

One of the world’s most widely used herbicides can survive in wild plants for up to two years, damaging their fertility significantly and potentially harming bees and other insect pollinators.

This has emerged from a new study conducted in Canada which suggests that glyphosate reduces the viability of pollen on wild prickly roses (Rosa acicularis) by an average of 66% compared with unexposed plants a year after the herbicide was initially applied, with traces of glyphosate persisting for at least two years.

Glyphosate is also used extensively in South Africa under the brand name Roundup and by the Department of Environment, Forestry and Fisheries to control alien invasive water weeds.

Developed originally by America’s Monsanto corporation to control broad-leaved weeds in crop fields, the herbicide has also been linked to cancer in humans by the United Nations International Agency for Research on Cancer.

In 2020, the German group Bayer (which has bought out Monsanto) agreed to pay up to $10.9-billion to resolve numerous current and potential future damages claims from people exposed to Roundup who have or may develop a form of cancer known as non-Hodgkin’s lymphoma. The Bayer agreement contains no admission of liability or wrongdoing.

But back in the plant and insect world, it remains unclear what compensation — if any — may be forthcoming following the latest Canadian research findings.

Dr Lisa Wood, a plant biologist and assistant professor at the University of Northern British Columbia, said previous research had shown that glyphosate caused male sterility in several agricultural plants, so it was not surprising to also find this in wild forest plants.

“What is important is the timeline. To continue to find these effects one to two years after herbicide applications, in new parts of growing plants, is noteworthy.”

Wood and lead author Alexandra Golt, a graduate student at the university, published their findings in the peer-reviewed journal Frontiers in Plant Science.

They said it was clear that glyphosate-based herbicides (GBH) cause deformation to the reproductive structure of prickly roses and that petal colour, petal shape, pollen viability and pollen size were also affected.

They suggest that these changes in the reproductive shape of wild plants could also have wide-ranging impacts on pollinator species, foraging animals, people who harvest from understory plants, and the overall health of the forest.

Glyphosate was discovered by a Monsanto chemist in 1970 and farmers quickly adopted it for weed control, especially after Monsanto introduced new genetically manipulated and glyphosate-resistant “Roundup Ready” crops — which enabled farmers to kill weeds without killing their crops.

By 2007 glyphosate was the most used herbicide in the US agricultural sector and by 2016 there was an estimated 100-fold increase in the frequency and volume of application of glyphosate-based herbicides globally.

But in 2015, the International Agency for Research on Cancer classified glyphosate as “probably carcinogenic in humans” following a series of epidemiological and animal studies, triggering some countries to restrict or ban its use.

Some of the independent scientists involved in the agency’s evaluation later received legal letters from Monsanto which they regarded to be threatening, the French newspaper Le Monde reported.

University of Alberta pathologist Consolato Maria Sergi said she found Monsanto’s legal letter to be “reprehensive and lacking in common courtesy even by today’s standards… I consider your letter pernicious because it maliciously seeks to instil some anxiety and apprehension in an independent group of experts.”

In 2019, Austria became the first country in the European Union to announce prohibitions on the use of the weedkiller, while Luxembourg also announced plans last year to phase it out.

Earlier this year the German cabinet announced that farmers would have to gradually reduce their use of glyphosate and stop using it completely from 2024 to preserve clean habitats for insects.

“The exit from glyphosate is coming. Conservationists have been working toward this for a long time. Glyphosate kills everything that is green and takes away insects’ basis for life,” environment minister Svenja Schulze said in a statement reported by Reuters.

Vietnam, Mexico and the Indian state of Punjab are among several nations or states that have also announced similar bans.

In 2018, researchers at the University of Texas at Austin found that honey bees exposed to glyphosate lose some of the beneficial bacteria in their guts and are more susceptible to infection and death from harmful bacteria.

The scientists involved in the study believe this is evidence that glyphosate might be contributing to the decline of honey bees and native bees around the world.

“We need better guidelines for glyphosate use, especially regarding bee exposure, because right now the guidelines assume bees are not harmed by the herbicide,” said Erick Motta, the graduate student who led the research, with Professor Nancy Moran. “Our study shows that’s not true.”

Commenting on the most recent study from Canada, the Johannesburg-based African Centre for Biodiversity (Acbio) said the use of glyphosate-based herbicides in South Africa for the control of alien invasive plants and weeds was well established, extensive and unregulated.

“Current data on quantity used or sold is incredibly difficult to find, as this is (within) the sole knowledge of the industry,” said centre researcher and advocacy officer Linzi Lewis.

“The Department of Environmental Affairs uses large amounts of GBH (with different adjuvants) extensively as part of its alien invasive vegetation removal projects. In terms of the impact of the findings of this article on South African biodiversity, there are multiple important aspects to consider as we know that globally, and in South Africa, biodiversity is in decline.

“It is, however, to be expected that GBH would affect the phenology (life cycles) of all plants differently, and more research would be needed to understand the longer-term residue effects of GBH on varying vegetation, in various biomes, including agricultural landscapes, and the impact on South African biodiversity specifically.”

Albi Modise, spokesperson for the Department of Environment, Forestry and Fisheries, confirmed that the department uses about 200kg of glyphosate per year for aquatic weed control.

However, Modise emphasised that the department only uses glyphosate products that do not contain polyethoxylated tallow amine and only on aquatic weeds, as the department had implemented the Precautionary Principle using the FAO International Code of Conduct of Pesticide Management (2014) where all glyphosate-based herbicides are eliminated and substituted for land species control.

The department “is also calling for the industry to comply with the ban of products containing polyethoxylated tallow amine as instituted by the Registrar, Act 36 in June 2020”.

Modise said the department was not able to confirm whether the Canadian findings were directly relevant to South Africa because the research article did not stipulate which glyphosate or N-(phosphonomethyl) glycine was used in the study.

“The co-formulant in the formulation is generally what causes the damage, such as toxic co-formulants such as polyethoxylated tallow amine that is found in many glyphosate-based herbicides.”

In response, Wood told Our Burning Planet that the Canadian product formula used was called VisionMax — but the other ingredients were not listed as they were treated as “trademark secrets”.

“However, there is plenty of agricultural literature showing that it is the glyphosate that causes these effects in plants,” she insisted.

Bayer spokesperson Utz Klages said: “Our glyphosate-based products have been thoroughly evaluated by regulatory authorities in Canada and around the world to ensure all approved uses of the products are protective of the environment, including non-target plants.

“Regulatory authorities have examined the topics raised in the new paper and determined that glyphosate-based products, when used according to label instructions, are protective of potential reproductive effects to non-target plants.

“Notably, an environmental analysis by the Canadian Forest Service, that considered hundreds of scientific studies, concluded that glyphosate as used in Canadian forestry does not pose unacceptable risk to natural habitats, wildlife or the environment (Edge et al. 2018).” DM/OBP