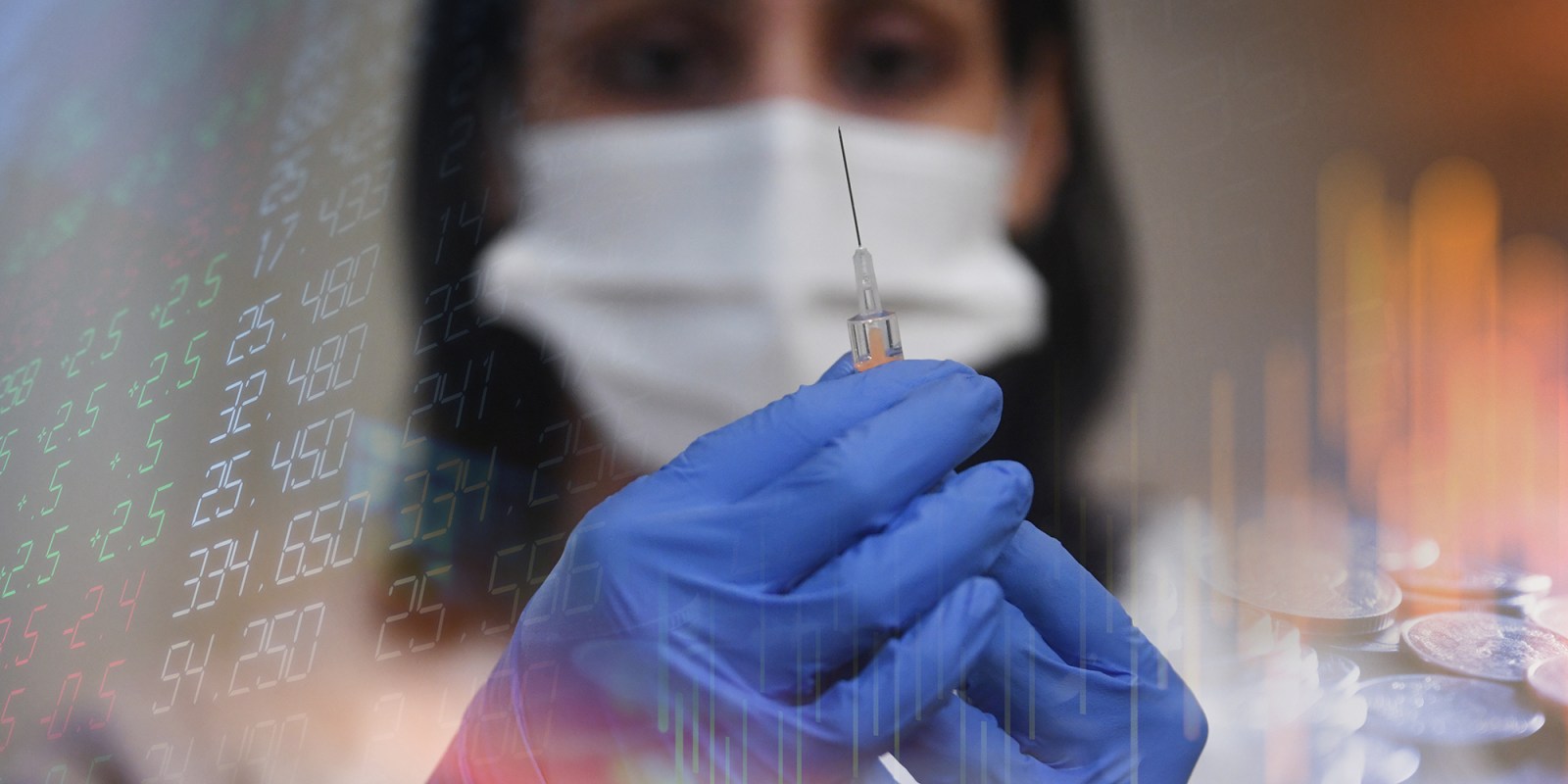 South Africa and the rest of sub-Saharan Africa are in the midst of ‘a perilous moment’, according to the IMF. The snail’s pace of vaccinations and the fastest growth in infections in the world is widening the ‘dangerous divergence’ in the global economy.

The race to vaccinate and achieve Covid-19 resilience and thus economic resilience continues apace. Sadly, the rate at which South Africa and the rest of sub-Saharan Africa are vaccinating is now by far the slowest in what is becoming a three-speed global vaccination roll-out.

This compares with the US, which has become the foremost Covid-19-resilient economy in the world, according to Bloomberg’s Covid Resilience Ranking, a far cry from the Covid mess in the world’s largest economy early in the pandemic.

India has also made huge, impressive strides in its vaccination drive, pulling the country out of its Covid morass just a month ago when images of overflowing hospitals, black market oxygen supplies drying up, and devastating death counts dominated the news. Now, it is the country with the second-highest vaccination rate after pipping the US to the post over the past month.

By contrast, South Africa, which had been warning about a possible third wave, has quickly taken India’s place in the global news flow, with Gauteng looking frighteningly like India at the height of its second wave.

This week the International Monetary Fund (IMF) shone the spotlight on the “perilous moment” in which sub-Saharan Africa – including South Africa – finds itself as the rate of infections in its third wave rises exponentially (see graph below) – a rate “that threatens to be more brutal than the two that came before.” 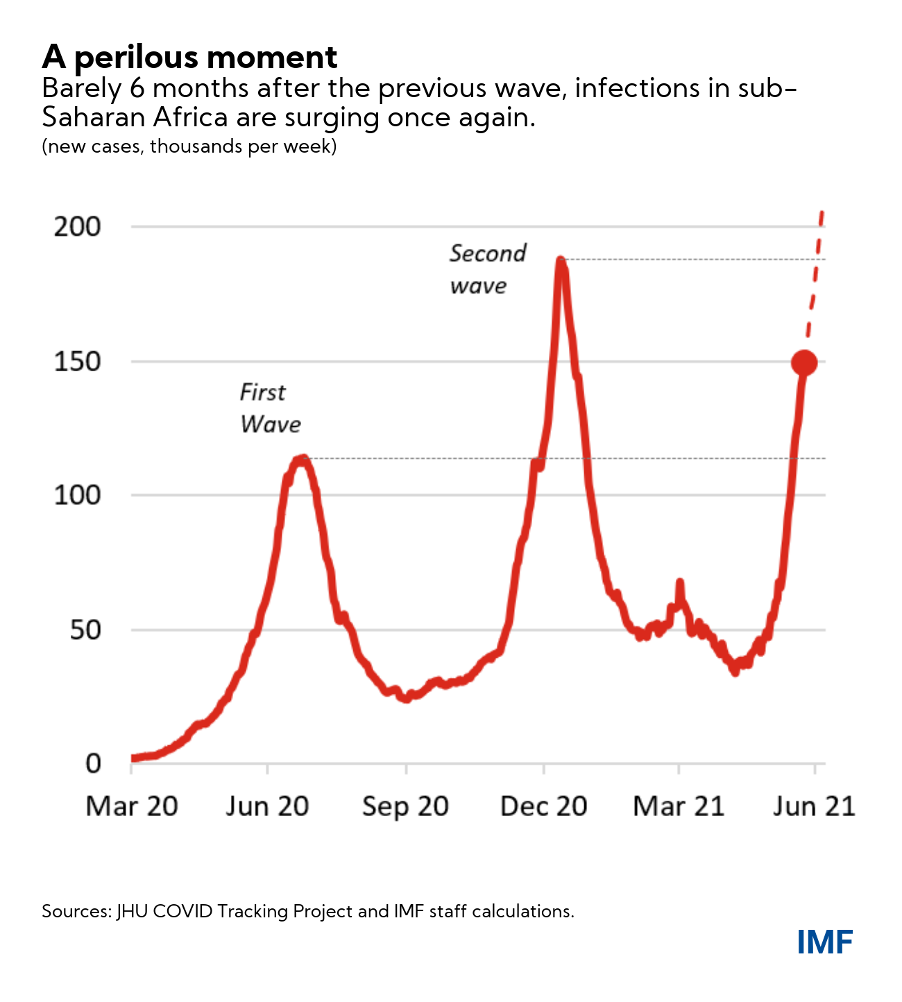 IMF MD Kristalina Georgieva points out that the growth of infections in sub-Saharan Africa has become the fastest in the world. If it continues, it could see infections in some countries more than double, or even triple, their January peaks.

She adds that the Delta variant, which is already spreading fast across 14 countries, is reportedly 60% more transmissible than earlier variants. This poses a huge danger to countries in sub-Saharan Africa, which are experiencing the fastest rise in Covid infections in the world and the slowest vaccine roll-outs globally (see graph below). 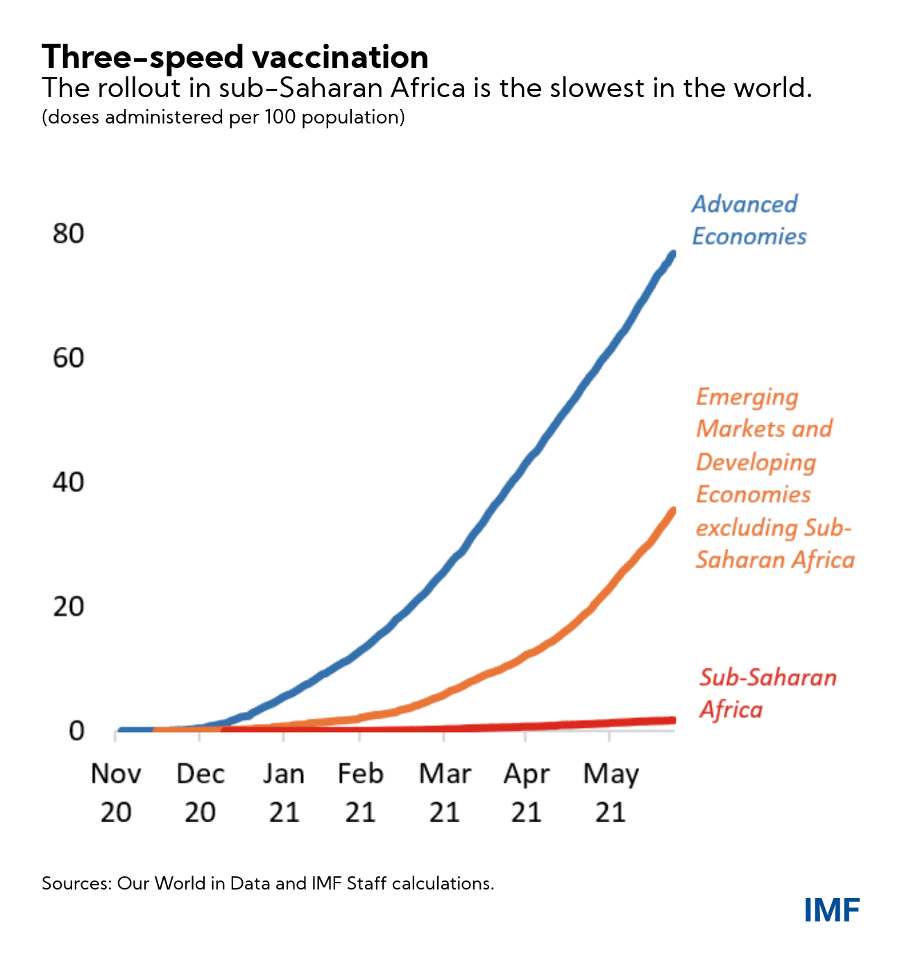 Right now, it’s clear that sub-Saharan Africa is losing the race, and something needs to change – fast – otherwise the region and the world stand to lose. As long as a large portion of the worldwide population is not vaccinated, no matter where they reside, the other countries, even the advanced economies leading the way, are at risk.

This is nowhere more evident than in the UK, where the vaccine roll-out has been impressive from the start, and its citizens are hoping to see all restrictions lifted on July 19 – already a month later than anticipated because of the advent of the Delta variant.

In its latest Coronavirus Watch report, Oxford Economics points out that despite having the highest vaccination rate in the G20, the UK’s Covid cases per million are higher than the other G20 countries barring South Africa, Argentina, and Brazil.

The graph below highlights just how much of an outlier the UK has become as the Delta variant has taken hold there. It shows the change in vaccines administered versus Covid cases per million between March 2 and now. The UK is the only advanced economy to have seen Covid cases rise as fast as the vaccinations administered. 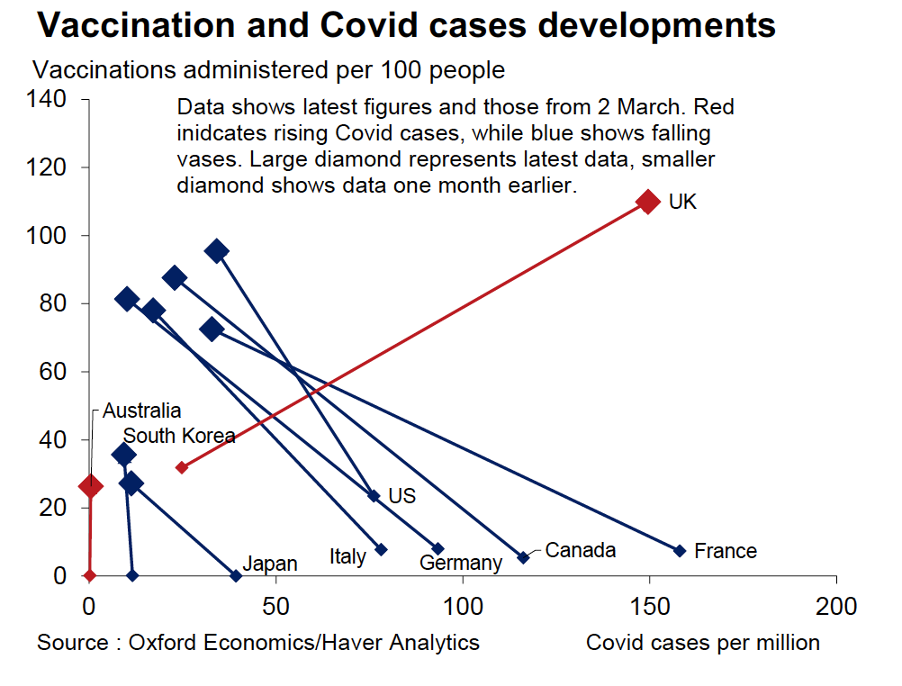 For anyone hoping that high vaccination rates will be the silver bullet allowing for a smooth and painless exit from the Covid nightmare, this is disappointing news. Up to now, the economic forecasts of the countries making most progress against the virus – largely the major developed economies – have been successively upgraded by the multilateral agencies like the IMF, World Bank and OECD based on that vaccine progress. However, the UK’s experience shows a worrying disconnect and is a keen reminder that the road ahead remains murky at best.

Oxford Economics puts forward a few possible explanations for the UK anomaly. The first is that the figures are not showing an accurate picture and the rise in infections is related to increased testing – a possibility about which the research company is sceptical. A more plausible explanation, it says, is that the rules have been relaxed too quickly to keep cases around their lows.

“The UK not only has had the fastest vaccine roll-out within the G20 but also, over the past three months or so, the most significant roll-back of activity restrictions.”

Should this be the case, it highlights how careful countries, particularly those in sub-Saharan Africa, will have to be in removing restrictions and fully reopening their economies. It’s also a huge worry, because the inevitable drag on economic growth will widen the already gaping gap between the performance of the advanced economies and the emerging and developed economies.

Georgieva sees sub-Saharan Africa’s recent experience as providing yet more evidence of a dangerous divergence in the global economy.

“One track for countries with good access to vaccines, where strong recoveries are taking hold. And another for those countries that are still waiting and at risk of falling further behind.”

She rightly points out that the reimposition of harsh lockdown measures used in previous waves is no longer feasible because they would come at too high an economic and social cost, which makes the road ahead even more treacherous.

On a more positive note, Oxford Economics believes that overall recent developments at a global level appear positive and should continue to support the recovery in the second half. However, it cautions that the UK experience shows that countries will have to live with Covid-19 for some time to come and that governments of advanced economies will have to make limiting the spread of variants a key priority.

For the emerging – and particularly the sub-Saharan – countries, President Cyril Ramaphosa was on the mark when he concluded his G7 address by saying: “If the world is to emerge from this grave crisis, it is essential that we work together to mobilise and direct resources to those countries in the greatest need – and that we do so now.” DM/BM