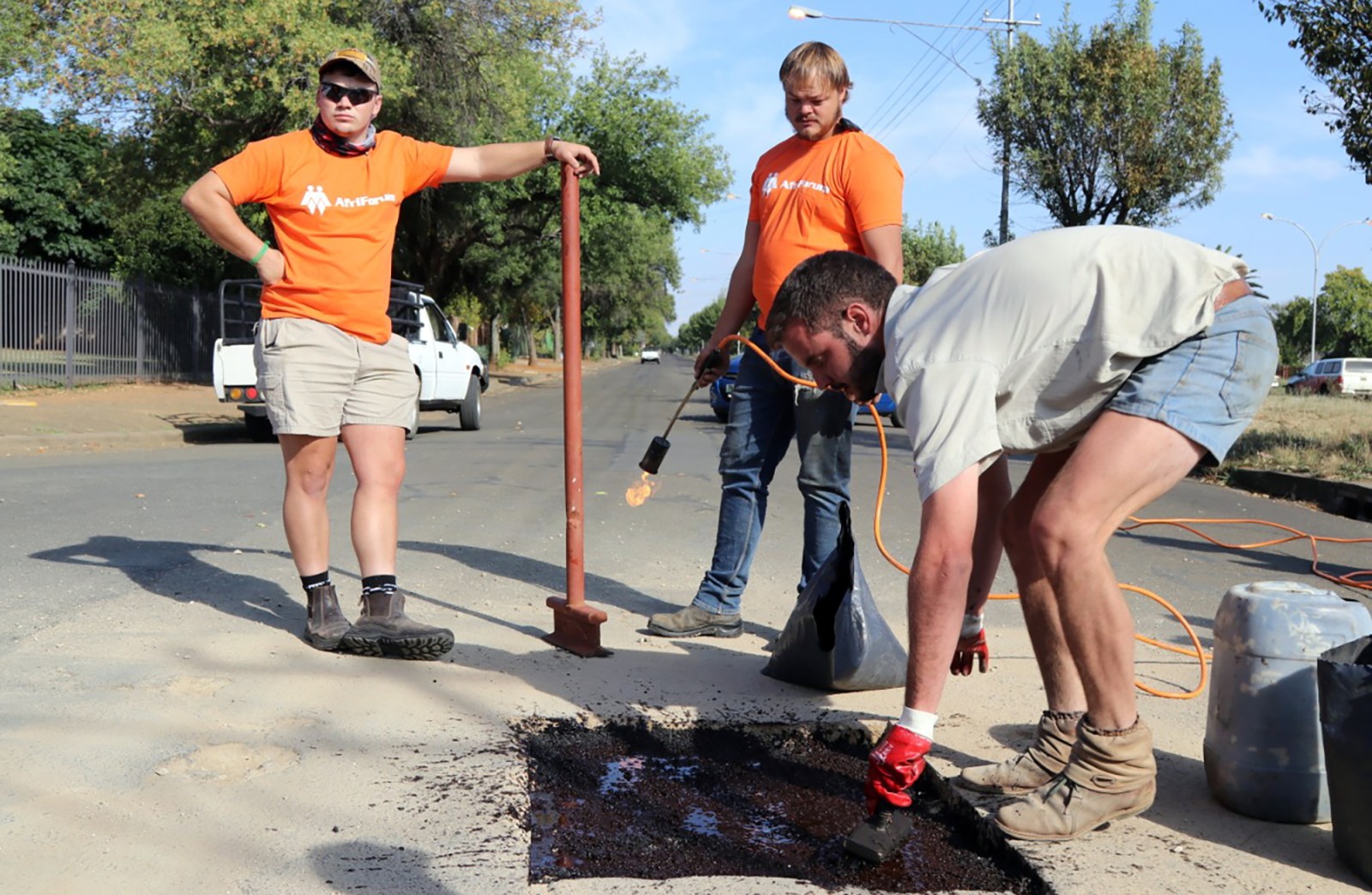 The organisation is taking on municipal duties in areas without services.

Driving through some of South Africa’s rural towns, with broken pavements and stuttering infrastructure increasingly the norm, you’d sometimes be forgiven for wondering if you’d arrived in warzone Kinshasa. The worrying factor is that the tentacles of this rapid demise have reached into the cities. Disregarding dilapidated downtown Johannesburg and the torn roads of the city’s traditional northern suburbs, parts of Bloemfontein and Potchefstroom are besieged by a combination of water shortages and potholes. So advocacy group AfriForum set up a local government centre a couple of months back to try to help out.

An AfriForum Excel spreadsheet details that, in 11 days of October 2020, its volunteers in Potchefstroom repaired 317 potholes in the city, using 142 sakkies teer, or bags of tar. Thirty-nine potholes were apparently repaired in Walter Sisulu Street alone.

“Our main strategy,” says AfriForum’s Strategic Advisor for Community Affairs, Dr Eugene Brink, “is to mobilise communities to take ownership of their towns, cities and neighbourhoods”.

For the residents of a number of Bloemfontein suburbs, Brink’s statement addresses mounting concern about the widespread and growing inability of South Africa’s municipalities to deal with, quite literally in some instances, their sh*t. Parts of the city go without water because, a reliable source says, Mangaung municipality has apparently not paid Bloemfontein Water. Emergency services are affected by unreadable or absent road names and signs.

Christo Groenewald says he has been working in emergency services for 20 years, and that response time is often crucial to saving a life. “If you cannot find the right address instantly it makes it really difficult.”

Groenewald is an AfriForum regional organiser in Bloemfontein. He says they put the governing Mangaung Metro on terms, in which they requested an action plan for when the street names would be repaired and painted. In the meantime, he says, they painted road signs in three neighbourhoods, Hospital Park, Pellissier and Fichardt Park.

“Biggest problem is that when we phone the municipality, no one answers.”

“This is also due to the lack of payment that the municipality is owing to Bloem Water, or if we are challenged with an unforeseen water pipe burst.”

Groenewald says he has learnt to work around the obstacle that is Mangaung municipality’s lack of response, when, for example, he wishes to report such a burst pipe. “I have good relations with Dr Limakatso Moorosi,* the CEO of Bloem Water,” – he says her name probably carries more weight than that of a mere emergency services worker.

Dr Moorosi confirms Mangaung’s service “challenges” – that euphemism used to describe the national deterioration of South Africa’s municipalities. She says if national government, be it a department or the Treasury, does not pay Mangaung municipality, then it cannot pay Bloem Water.

“And we survive through the water we supply to the municipality. So when municipalities don’t pay us, we can’t pay salaries, Eskom and all such institutions.”

Pionier gets to it

In response to much of South Africa’s service delivery crisis, Brink says AfriForum has established another institution, Pionier (Pioneer), a service-delivery company, to provide expertise in rendering services where it feels they are needed. The PhD candidate says Pionier is removing refuse for a nominal fee, thanks to what he says is the “inability or unwillingness” of the Mangaung Metro to do it.

“We can’t let the rubbish pile up in the streets, and the uptake of this service has been quite astonishing.”

Brink says AfriForum is promoting such sustainable, community-driven solutions to alleviate and overcome many of the service delivery challenges.

AfriForum occasionally augments the municipality’s capacity by providing extra labour or other resources.

“We often supply equipment so that municipal workers can do their jobs,” says Brink, or, as in Potchefstroom, they use the municipalities’ equipment to “solve a problem”.

On the day we make electronic contact, Brink is on his way back from Ermelo, where he met with the business community to discuss what he described as “persistent service-delivery problems”. He says rural areas are generally hit harder by lack of service delivery than the big towns. He mentions the total breakdown of water supply to Koster, a small farming town, and Swartruggens, both within the failing

Koster AfriForum representative Carel van Heerden says that, with sewage running into the Elands River, the Koster Concerned Citizens (KCC) group obtained a court order that allowed them to take over the running of the sewage and water plants on 7 January 2021. On April 1, Pionier stepped in and ran the water and sewerage works as the service

provider. Over that period, the municipality again had water fit for human consumption.

Yet Van Heerden says the municipality and province saw fit to have the order overturned on 11 May, with Magalies Water (MW) ordered to act as service provider.

Van Heerden says when they handed the management of the municipality’s water affairs to Magalies Water, on 19 May 2021, all the reservoirs were full. He says the overturned order was a “political decision” and that no MW staff are at the plants; the “water is brown”.

Van Heerden says the KCC, which he says comprises black and white citizens, is appealing the overturned order.

Two days after the management of the water plant was handed to MW, on 21 May, Van Heerden says there was limited water available in the municipality, adding that the crisis was intensified when a pipe burst and that the Koster-Swartruggens area was without water for eight days. Apparently this is a problem that should take 24 hours to rectify, but there is no one to ask for comment at the municipality because the number is “not in service”.

Also not in service, according to a 22 June article in The Lowvelder, is the Waste Water Treatment Works (WWTW) in Lydenburg/Mashishing. It says WWTW has not been fully operational for the past four years.

AfriForum’s latest #CleanWater report confirms that the effluent in Lydenburg could not be measured in 2020 because of the water “not flowing through the plant”. Calls to the office of the mayor, municipal manager, or anyone willing to speak on service delivery, were unsuccessful.

Also starting with an “L” is Lichtenburg. As reported on Radio 702 and most news services, Clover is about to close SA’s biggest cheese factory, in Lichtenburg, because of poor service delivery, moving it to Durban instead. Water and power cuts, sewage running through township streets, potholed roads and uncollected refuse are among the problems cited.

Lichtenburg AfriForum North West district coordinator Petrus Coetzee says they spent about R100,000 on tar and labour for fixing roads in the town, in coordination with NoordWes Koöperasie.

Pay back the money

Providing parallel municipal services costs money, and most residents can’t afford to pay, regardless of the ethics involved. Brink says AfriForum in Bloemfontein is seeking legal ways to remove those costs from the municipal bills of residents who make use of the service so that they don’t pay twice for the same service.

With its Blue and Green Drop Project, countrywide municipal audits and #CleanWater initiative – annually testing drinking water and sewage – AfriForum is increasingly taking on a municipal function in parts of South Africa.

With misappropriated funds and the appointment of unqualified persons to positions demanding specific knowledge and skills contributing to the desperate state of service delivery in South Africa, the upcoming municipal elections will determine whether South Africans want more of the same. DM168

*Formerly the Free State agriculture department head, this is the same Dr Moorosi who is on bail after being charged with contravening the Public Finance Management Act and fraud, in connection with the failed R288m Estina dairy project.