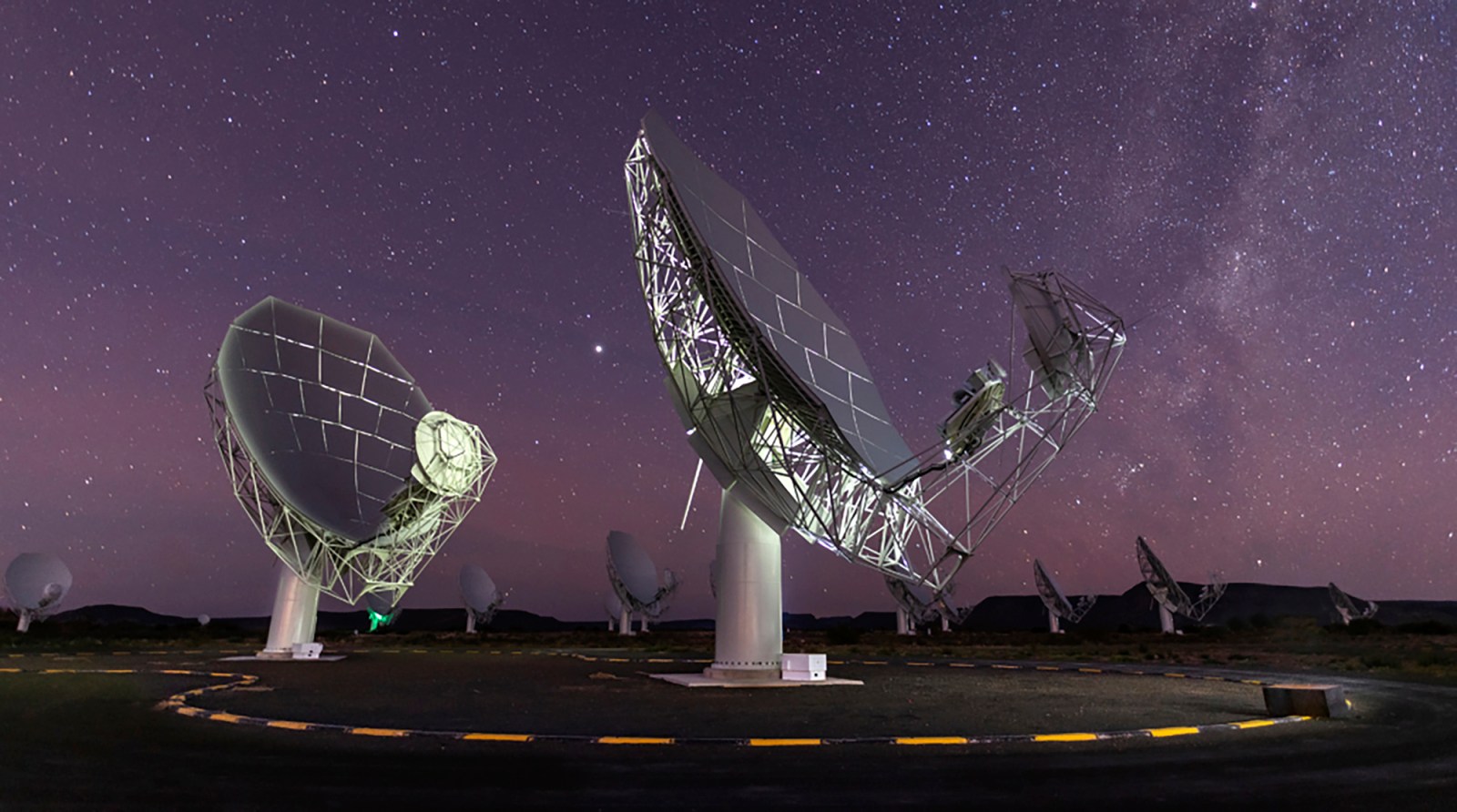 Some of the 64 MeerKAT radio antennas at night. (Photo: Sarao)

As the best scientific instrument of its kind in the world, the MeerKAT radio telescope in the Karoo is making discoveries that no other telescope can make – even in a galaxy as well studied as the IC 4296.

The MeerKAT radio telescope, located in Northern Cape, has produced a remarkable image showing a combination of cosmic features never before seen, revealing unexpected details of the inner workings of enormous radio galaxies.

These striking features – cosmic “threads, ribbons and rings” – are much larger than our own Milky Way.

At the centre of the giant elliptical galaxy called IC 4296 is a rotating black hole with a mass of a billion suns. Energy released by matter falling onto the black hole generates two opposing radio jets containing magnetic fields and relativistic electrons.

After travelling through intergalactic space at the speed of light for 160 million years, these radio waves were detected by the South African Radio Astronomy Observatory’s (Sarao’s) MeerKAT telescope, which is in the Karoo region of Northern Cape.

The bright spines of the initially straight jets become unstable just outside the galaxy, where some of the electrons escape to create several faint radio “threads” below the galaxy. Between the bright jets and the outer lobes are smooth “ribbons”, filling channels excavated from the surrounding gas by defunct jets from an earlier period of activity.

The ribbons are eventually stopped by intergalactic gas, nearly one million light years from the central galaxy (a distance equal to 10 times the diameter of our Milky Way home galaxy), and form the “smoke rings” visible in the left radio lobe.

Dr Fernando Camilo, Sarao’s chief scientist, says that physically, these – as well as virtually all the radio emission indicated in orange/red hues in the image – are caused by electrons moving at nearly the speed of light which, when interacting with magnetic fields, emit radio waves detected by the MeerKAT telescope.

These are enormous structures. End to end, from the tip of the right lobe to the tip of the left lobe, the radio structure is about 1.5 million light years in length – or about 15 times the diameter of our Milky Way galaxy.

Our own Milky Way galaxy also has a black hole at its centre but it’s currently not very active – especially when compared with galaxies such as this one.

Active galaxies such as IC 4296, however, can shape the evolution of the future formation of stars within them, and can sculpt intergalactic space around them.

Camilo says: “From a science perspective, we’re thrilled because this image shows so much of what’s going on in a galaxy, which was already well studied with other leading telescopes, that we didn’t previously know.

“But, more viscerally, we feel it just looks extremely striking and pretty.”

In explaining the role of the black hole, Camilo says: “As it rotates, and matter falls towards it because of gravitational pull, the gravitational energy is converted to kinetic energy, with electrons launched into narrow jets travelling in opposite directions at speeds near that of light. These electrons then emit the radio waves that, after millions of years of travel through intergalactic space, we detect on Earth.

“The black hole goes through periods of activity and inactivity that each last for millions of years,” he says. “Think of it like a volcano that has periods of more or less activity, or even goes extinct. Except that this is more like an intergalactic blowtorch.”

Yet, to make this observation and, ultimately, the image was no easy feat.

The team pointed MeerKAT at this galaxy for a total of 15 hours over two days.

The radio signals from the MeerKAT antennas were first converted into digital streams of data that were transferred via underground fibre optic cables to the Karoo Array Processor Building, which is on the Karoo site.

So much data was transferred – tens of gigabytes per second – that specialised purpose-build electronics and a supercomputer were required to do a first pass of analysis and reduce it to smaller sizes that could be stored in computer disks for further processing. The data was then moved to the MeerKAT archive in Cape Town via a fibre optic link, where it could be accessed by astronomers.

The observations themselves were carried out by telescope operators, who control MeerKAT from Cape Town. Because of Covid-19 restrictions, they’ve been doing this work from home, rather than from the control room, for the past 15 months.

After the data collection, astronomers used specialised software to convert the raw data collected by the telescope into the radio image. Among other steps, this involved removing “radio pollution” (radio frequency interference caused by satellite signals in Earth’s orbit) and doing many rounds of image optimisation.

Radio images obtained with telescopes such as MeerKAT aren’t produced in a simple form like those made with a camera. Because MeerKAT is a huge data machine, making its images requires the expert manipulation of enormous datasets.

“MeerKAT is the best scientific instrument of its kind in the world. And, therefore, it’s making discoveries, such as the threads, ribbons and rings visible in this image, that no other telescope can make,” Camilo says.

“As we continue to add capabilities to MeerKAT, the planning for construction of the international SKA telescope is well under way. Towards the end of this decade, MeerKAT will be incorporated into the SKA telescope operating at ‘mid’ frequencies with antennas spanning more than 100km in the Karoo.” DM168