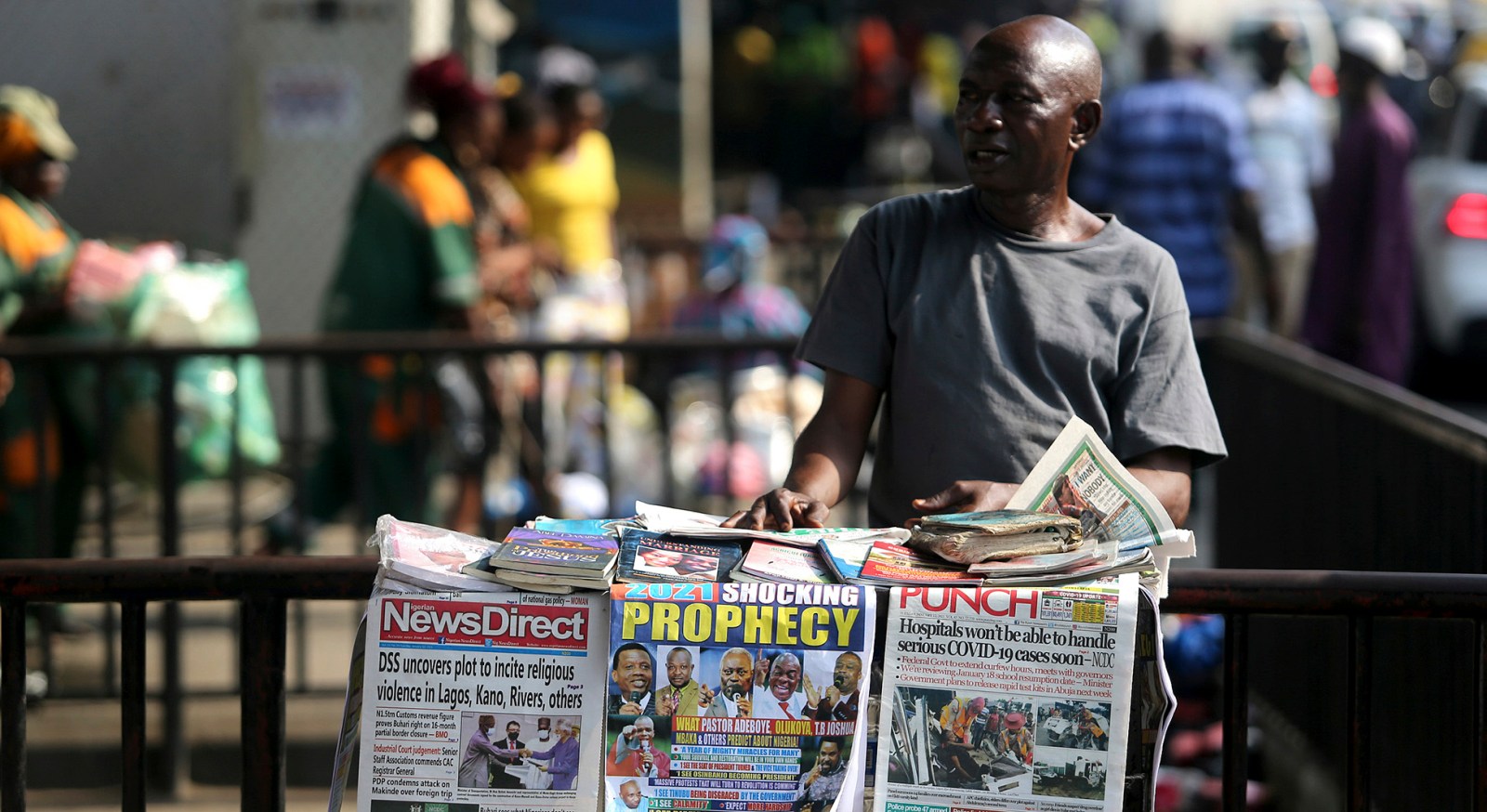 Newspapers with headlines on Covid-19 news are displayed on a news stand along a road in Ikeja district in Lagos, Nigeria. (Photo: EPA-EFE / AKINTUNDE AKINLEYE)

Together with ongoing insecurity and humanitarian crises, the region faces vaccine shortages, hesitancy and fake doses.

For those living in Boko Haram-affected areas of the Lake Chad Basin region, the risk of Covid-19 is high. The long-standing humanitarian crisis, unequal access to vaccines, the emergence of Covid-19 variants, vaccine hesitancy and the risk of fake vaccines are all to blame.

There are growing concerns, confirmed by the World Health Organization (WHO), of the third wave of infections in Africa getting out of hand. At least 22 countries on the continent so far have experienced surges, with cases increasing by 52% by the third week of June.

The situation is made worse by the 12-year-old Boko Haram insurgency that’s caused one of the worst humanitarian crises in the world. It has led to food insecurity and an increased risk of spreading diseases like cholera, typhoid, malaria, meningitis, measles and more.

Of the four Boko Haram-affected countries (Niger, Nigeria, Chad and Cameroon), Chad has the lowest national Covid-19 figures, and new cases are declining. The Hadjer-Lamis and Lac regions — the two areas of Chad affected by the Boko Haram crisis — have had fewer than 60 cases with three deaths and no active cases as of 11 June. However, ongoing insecurity means the risk remains significant. The impact of pandemic protocols also limits humanitarian workers’ assistance to communities.

In Lac, Covid-19 has affected people’s ability to meet their basic needs because of a loss of income and humanitarian aid, and an increase in the price of commodities. In Hadjer-Lamis, severe acute malnutrition is above the WHO’s 2% emergency threshold.

In Nigeria’s Borno State, the Lake Chad Basin area hardest hit by Boko Haram, there are serious concerns about hunger levels rising to those seen in 2016. The state has both the highest number of confirmed Covid-19 cases and deaths among the three states in Nigeria most affected by Boko Haram as of 28 June.

These problems, coupled with increasing attacks by violent extremists, could weaken the fight against the virus. It may be difficult to convince people facing hunger to have a vaccine, and health workers could encounter security threats when trying to reach people in unsafe areas.

Apart from the complex humanitarian situation, there’s also scepticism among local populations about Covid-19 vaccines. This is due to the earlier safety concerns around the jabs, a general lack of trust in governments, arrests and interception of counterfeit injections, and fake news, among others.

The situation is worse in Cameroon. Only 11% of the 700,000 doses received had been used by 5 June. In Niger and Nigeria by comparison, more than 50% of their vaccines had been administered. Despite vaccine administration standing at more than 50% in Nigeria, there have been campaigns against the injections, notably from political and religious leaders. One of the country’s most renowned pastors warned his congregants not to take the vaccine.

Niger is the only Lake Chad Basin country where most people have expressed confidence in the jab and a willingness to have it. According to a Covid-19 vaccines perception report by the Africa Centres for Disease Control and Prevention, 93% of those interviewed expressed willingness to accept the vaccine.

According to the report, Nigeriens may be less susceptible to believing misinformation. Unsurprisingly, they listed social media as one of the least trusted sources. Nigeriens are also more likely to have confidence in their government regarding Covid-19 vaccine approval — even more than institutions like the WHO.

Experts argue that vaccine inequality is particularly dangerous for Africa because of the market it creates for fake jabs. Both Cameroon and Nigeria have reported the circulation of counterfeit vaccines, further raising fears among people about having them.

The region’s lack of vaccines is part of the larger problem facing Africa. With about 1.3 billion, the continent accounts for less than 2% of global vaccinations so far. One reason is Africa’s reliance on the WHO-driven Covax programme, which was, ironically, designed to promote vaccine equality. Covax relies on India’s Serum Institute, the world’s largest manufacturer of vaccines. But jabs slated for poorer countries have been diverted for domestic use.

Africa has also been slow to deploy vaccines. There have been cases of vaccine doses being destroyed or returned because they were near expiry, and countries were ill-prepared to administer them rapidly. In the Lake Chad Basin, Nigeria returned some vaccines received in late March because they couldn’t be used with an expiry date of 13 April.

Governments in the region and their partners should improve the logistical capacity to receive, deploy and administer vaccines even before they arrive. Those involved should draw from their experience in handling past epidemics like Ebola and polio.

Targeted sensitisation campaigns on the importance, safety and efficacy of vaccines will help tackle hesitancy. Scientists, health workers, traditional and religious leaders, community leaders and even celebrities in the region have an essential role to play. DM

This article is funded by the Ministry of Foreign Affairs of the Netherlands.