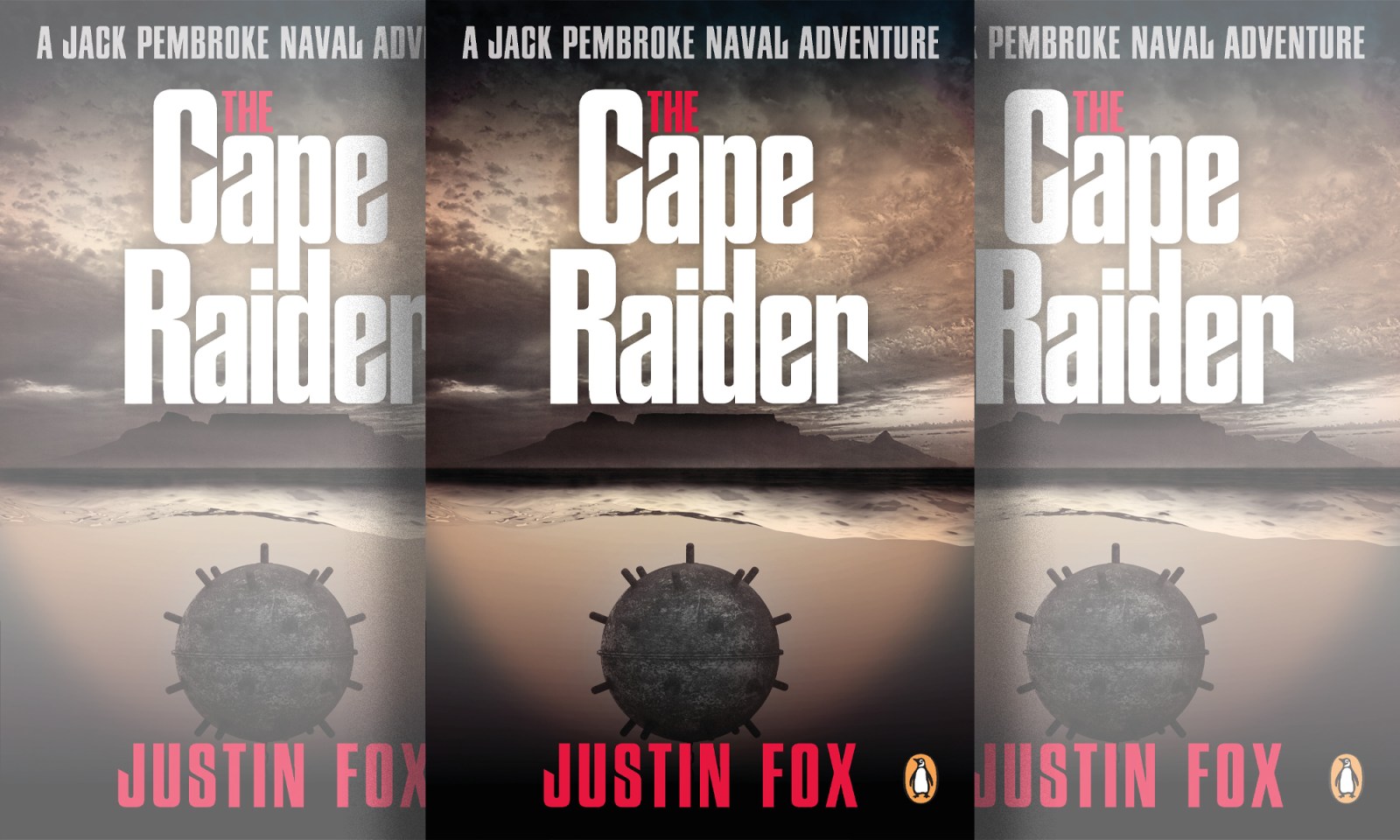 The Cape Raider, a new novel by Justin Fox, lifts the veil on a little-known World War 2 battle to keep the Cape sea route open. Below those icy waves, killers lurked.

Fear comes in many forms.

There’s fear of what we can see: fierce dogs, snakes, lions, stuff that can bite, poison or eat you. There’s fear of being outnumbered, socially excluded, disapproved of. As a creature with no claws and small teeth, our survival depended on being part of the pack. Alone we were easy meat. We fear disapproval and being isolated.

But the most chilling of all is fear of the unknown. That unexpected, unseen thing in the darkness that you’re sure knows you’re there. Like the monster in the horror movie or the spikey sea mine anchored just below the surface that blows you to smithereens the moment your ship touches it.

Jack Pembroke, in Cape Raider, has a bunch of these fears so he’s not great hero material.

It’s World War 2, his father’s an admiral in the Royal Navy and his mother is a high-born socialite who shunted Jack and his sister off to boarding school at an early age. Jack is a lowly sub-lieutenant of a destroyer nosing into Dunkirk to save a beaten army. To put it mildly, he’s shit-scared and showing it.

A Stuka attack sinks his ship and he ends up, leg broken, barely alive on a life raft and later in hospital with a horror of sea warfare.

This is not the man to be put in charge of a small group of minesweepers operating out of Simon’s Town. But his father’s rank and family tradition make it impossible for him to refuse. Out there in the icy Cape waters are Nazi wolf packs; submarines laying mines and picking off Allied shipping.

This is the setting of The Cape Raider by Justin Fox, a novel in the tradition of Master and Commander by Patrick O’Brien who virtually invented the genre of thrilling naval warfare. And, as with O’Brien, once you start reading Cape Raider it’s hard to stop.

The Cape waters are a great choice for a book on naval warfare — it’s a theatre of war that’s fallen through the cracks of history. In terms of storytelling, there are no contestants.

Here’s the context. In 1935 Hitler appointed Karl Dönitz as commander of the German Navy and tasked him to build its U-boat arm. Dönitz initiated the construction of a large fleet of medium-sized U-boats that could ensure the destruction of a merchant convoy. He reasoned that if the sinking of Allied merchantmen outnumbered the capacity to replace them, Germany could control the oceans.

During the spring of 1941, Dönitz realised the Cape Town convoy route would make an excellent target for a concentrated U-boat offensive. These were virgin waters almost devoid of substantial anti-submarine activity. He resolved to strike the proverbial ‘soft underbelly’ of South Africa.

It was a maritime trade route critical to war supplies from across the British Commonwealth, most importantly between India and Britain. Attacks would drive shipping into the sanctuaries like False Bay and Saldanha and their entrances could then be mined.

On 4 October 1942, a mere four days before the first German submarine offensive off Cape Town, Royal Navy intelligence noted German submarines moving south towards Cape Town but failed to report it. The German wolf pack had left its homeport two months earlier. When it arrived at its destination, the South African defences were caught totally unaware.

The U-boats sank 14 ships within three days and the South African Command scrambled to build its anti-submarine defences. This is the moment of Cape Raider and the arrival in South Africa of Jack Pembroke.

German submarines were to operate off the South African coast from 1941 to 1945, with the main U-boat operations concentrated between October 1942 and August 1943.  German U-boats off the coast of South Africa accounted for 114 Allied merchant ships sunk, with an accumulated loss of 667,593 tons.

By the end of March 1943, however, anti-submarine warfare in South African waters had become so efficient that U-boat wolf packs managed to sink only a small number of Allied shipping.

Eventually, owing to negligible sinking results and the loss of a number of U-boats, Dönitz ordered the German submarines to various other operational areas.

In Cape Raider, Jack Pembroke is given the job of urgently pulling together a small fleet of minesweepers out of repurposed fishing boats and a motley crew of local snoek fishermen and navy recruits in what’s regarded as a backwater posting. It’s clear from the start they don’t trust their rookie captain. Jack absolutely knows he’s not up to it, but how can he fail the family tradition?

His father, sister and new girlfriend believe in him and say it’s his duty. What can they see that he can’t? Can he face his own demons? Even worse, he’s almost set up to fail in the face of the Nazi wolf packs and a highly experienced U-boat captain devastating convoys and sowing mines in shipping lanes. What ensues is the stuff of this remarkable book.

As a travel writer and former editor of Getaway magazine, novelist and ex-naval officer with an interest in theatres of warfare, Justin Fox is well able to write a highly readable story and pack it with the kind of fascinating detail that contemporary nautical types will be Googling to confirm. They are unlikely to find errors. With a PhD in English from Oxford and being a former naval man with a lifelong fascination with archives, Justin is a meticulous researcher.

A blurb on the cover of Cape Raider claims it’s “A Jack Pembroke naval adventure.” This suggests we will hear more of the man who feared the sea but learned to overcome it. That would be a very good thing. DM/ ML

Justin Fox’s The Cape Raider is published by Penguin Random House and available for R290.