Manny of Joburg’s Radium: ‘There’s only one of me, China — and I can’t franchise myself into pieces’ 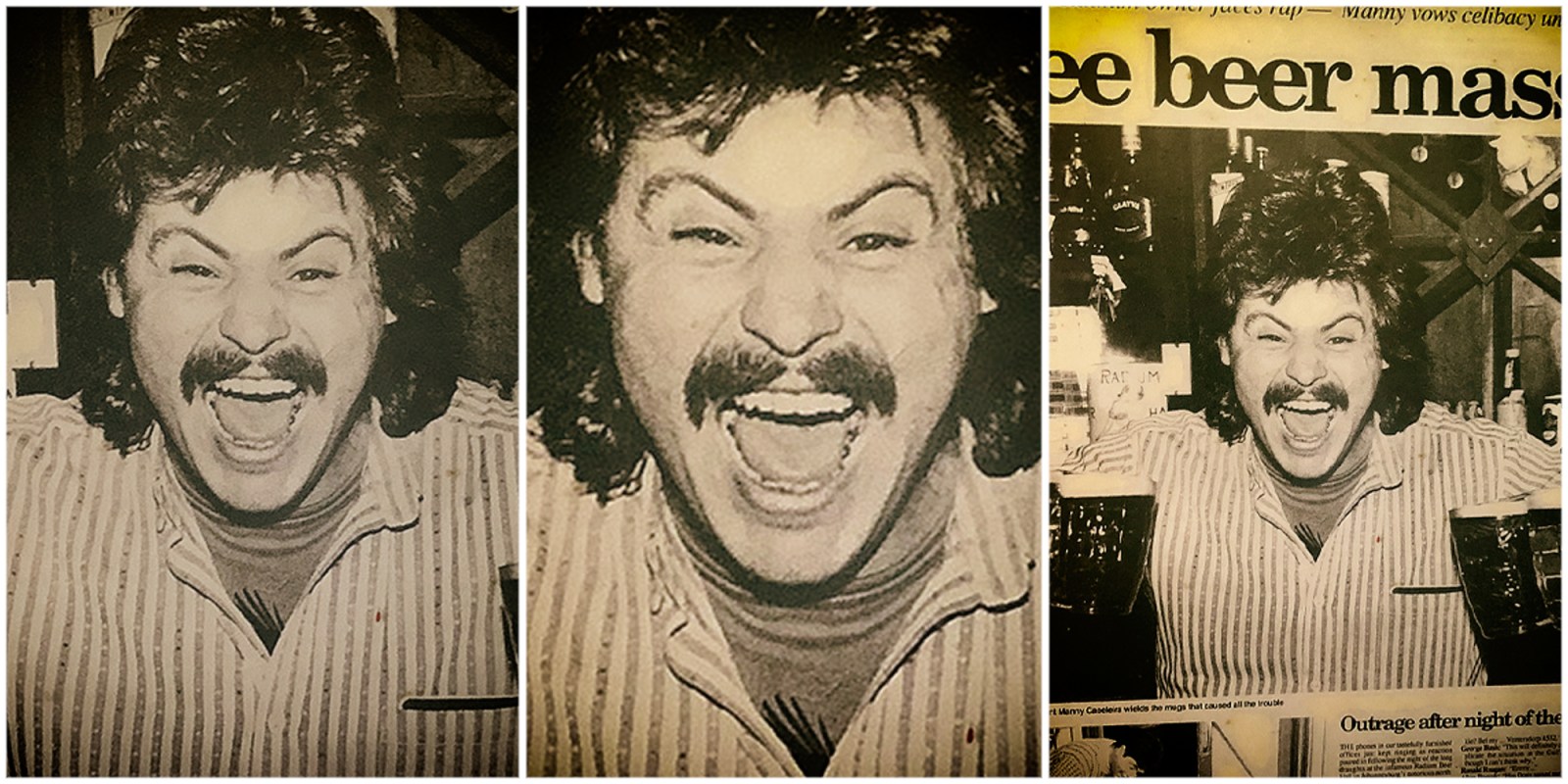 Manny Cabeleira is gone, and an era has ended in Joburg. The flamboyant saloon keeper made his mark as the proprietor of the Radium Beer Hall, scene of many memorable gigs, and will be sorely missed by a multitude of friends. One of them is writer Tom Learmont who wrote Manny into a composite novel called Radium Nights.

Tom Learmont had the immense luck to be born along with the Golden Age of Science Fiction — and grew up filled with the SF Sense of Wonder. Granny Learmont bought him his first copy of Astounding, the November 1946 issue, with a cover story by Theodore Sturgeon. Then came HG Wells and Edgar Rice Burroughs, who left the young lad permanently warped. Sometimes he sits and thinks about talking squids in outer space — and sometimes he just sits.

The Khalil family opened the Radium Tea Room in 1929, just north of the ‘kink’ in Louis Botha Avenue in Orange Grove. It did back-door business with black customers, selling them “white” liquor in defiance of South Africa’s racist laws. In 1942 the joint acquired a wine and malt licence and became a beer hall. New owner Joe Barbarovich installed the old teak bar, saved from the demolition of the Ferreirasdorp Hotel.

In 1922 the labour activist known as “Pick Handle Mary” had used this piece of furniture as a pulpit, as she delivered inflammatory speeches to striking miners. After a quiet few decades as a neighbourhood spit-and-sawdust men-only pub in Orange Grove, Joburg’s Italian borghetto, third owner Manny Cabeleira created a new Radium in 1986.

This flamboyant character had an unfailing instinct for marketing — and began to build the local pub into a world-famous watering hole. His first act was to welcome black and female customers, to hurry on the death of apartheid. He put in a restaurant with largely Portuguese cuisine.

Soon there was live jazz four nights a week, and a monthly Sunday blast by the Phat Brass Big Band. A unique atmosphere, food, music and Manny Cabeleira’s ebullient personality saw the famous and well-to-do dropping in for a genuine Joburg experience. The Radium is now a provincial heritage site, recommended by international guidebooks. When asked why he didn’t franchise his successful formula, Manny said, “There’s only one of me, China — and I can’t franchise myself into pieces.”

One quiet winter’s night at seven o’clock, an old red-rinsed lady in a brown coat, with an alert bird-like tilt to her head, sat against the wall, nursing a glass of white wine. Manny said, “Old Aunty May. She’s got a half-empty papsak of sweet white up the right sleeve of her coat. She comes in, orders one glass, then stays the whole night. She casually slides her glass below the bar in her left hand and tops it up from the papsak with a quick squeeze.”

Manny smiled. “Tjaaina — it’s winter, and she needs company more than the dop. It’s cold in her little bachelor flat, and she hates the TV. You can’t be hardegat all your life — but that’s between you and me, okay? Maybe somebody will buy her a drink and put a few cents in my pocket.”

On a Wednesday the week before payday, the sole lunchtime customer was Richard Branson, eating a steak. In the bar, four Antipodeans dressed like rugby fans were drinking draught beer, egged on by a tall man who ordered his mates to put another schooner away as fast as they could. On the fifth round, they were wandering in and out of the front door, conversing in flat hard vowels on the pavement.

Manny said, “Gentlemen, you are welcome in the Radium, but if the cops catch you drinking in the street, it’s more than my liquor licence is worth.”

The leader gave a guffaw and came back in, saying, “Don’t you worry your head about that, little fella! Barman — another round!” As the Antipodeans commenced throwing the sixth round of draughts over their throats, Manny slipped behind the bar and unclipped the silver Wilson baseball bat from the wall. And he refused to serve a seventh round.

The big fellow laughed loud and long. He said, “No sweat, mate. We’ll drink elsewhere!” His three companions followed him out into the street.

Manny muttered, “You’re not taking my glasses,” and dashed to intercept the tankard thieves. The leader seemed almost twice Manny’s height as he lunged at the saloon keeper. The Wilson twinkled in the sunlight and red spurted from the drunk man’s temple. The bat had tapped a minor blood vessel. The Antipodean recoiled, screaming for the cops. Who took all five to the Norwood station.

Manny was back in half an hour, with the Wilson and all the purloined glassware. “Self defence,” he announced, and recounted how the tall casualty had called the desk sergeant “a fucken monkey”. Then he had accused the Norwood cops of being in cahoots with Manny. “You’re corrupt, the whole bunch of you,” he had screamed. Upon which the Antipodeans were arrested.

“And now I deserve a toot,” said Manny, clipping the Wilson back in place before nudging the Black Label optical twice with a sherry glass.

The German had a faint smile on his face, as if relishing a pleasant secret he was not quite ready to divulge. Two young customers asked to share his table. The close-cropped Chuck Norris look-alike smiled and said, “Nein”. He flipped his leather jacket open to reveal a nickel-plated handgun tucked into his jeans. Then Manny appeared. He put both hands on the German’s table and leaned in with his Van Dyck beard close to the man’s ear.

In a hoarse whisper, he said, “Sir, you have been menacing my customers with a firearm. I have called the cops, who should be here to take you away in five minutes. But if you are not off my premises in one minute, we will take you into Ninth Street and shove that gun right up your arse. And then hand you over to the cops.”

Nothing happened for a long second, before the German burst out of his chair and ran. There was a glimpse of him as he sprinted past the Ninth Street window, then he was gone.

“A mild dose of arseholitis,” said Manny. “He’ll get over it.”

A commotion was centred on Mario. Half an hour before, he had turned down Manny’s offer of a  metered taxi and had chosen to walk home, despite the glow generated by nine glasses of  “Tassenbergo”. He had gone off into the night, and now he was back, grazed and bloodied, with mud on his shirt.

Mario stammered that he had been cornered by real Chicago gangsters.

“They didn’t get me! I run, I fall — that’s why the blood. I swear to God, Manny — a dozen Mafiosi — big black hats, black suits — like the Valentine’s Day massacre!”

Manny said, “Mafiosi se gat. You bumped into some Lubavitchers walking home from shul! Somebody — call a taxi for my friend here. Before I vloek him stukkend!” DM