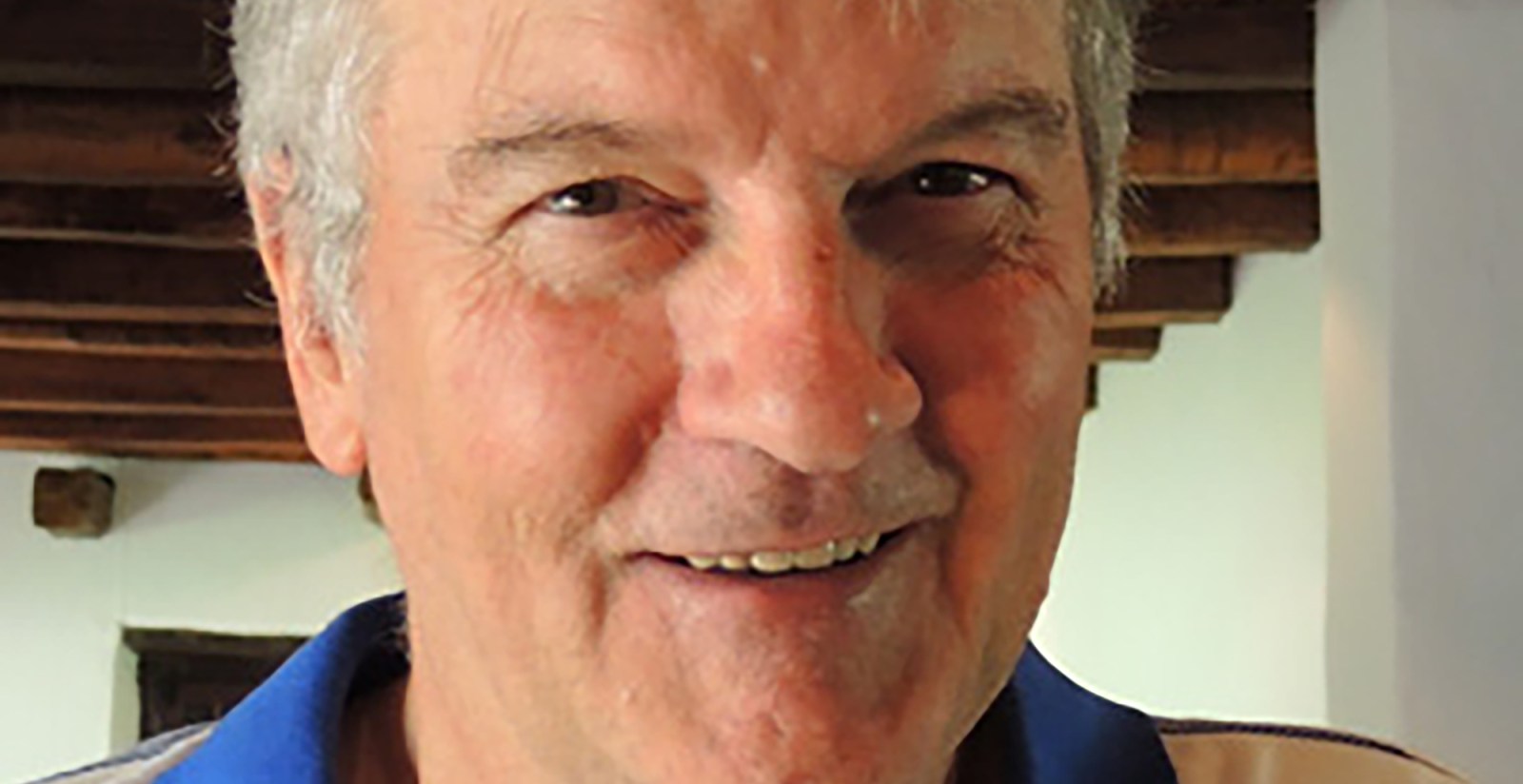 Hugh Hodge, the prolific poet, who had a deep understanding of form and who, in recent years, dedicated himself to the strict brevity of haiku, was perhaps less known for his poetry than for his determined and steadfast service to poetry.

Hodge was far less interested in publishing his poetry than he was in hearing and encouraging new voices at the weekly Off The Wall (OTW) sessions he ran for almost two decades, and he knew and was known – and seemingly universally loved – by almost every poet who practised in Cape Town, or who visited Cape Town from other cities and countries.

“Against endless tides of change and logistical odds,” Ndlovu said, “he ensured that OTW became Cape Town’s longest running weekly poetry open mic session and contributed substantially to local poets across our diversity, engaging in conversation, networking, encouraging, respecting each other and sharing our common love for this word-weaving art.

“Many cut their teeth with an audience here (and) went on to leap into performing regularly or, finally, publishing a poetry collection.”

Hodge welcomed everyone who loved the word as it expresses itself poetically, which means that he made no concessions to the egos of experienced poets, nor did he censor or restrict even the newest of nervous poets.

Off The Wall unconditionally welcomed every poet who ever shakily took the microphone to read poems from a grubby much-folded piece of paper torn from an exercise book, or learnt off by heart and struggled through despite nerves. Every poet received applause from the audience regardless of how their reading went or what sort of poetry they read. Hodge neither praised nor criticised. He simply welcomed and listened.

He was consistently and steadfastly egalitarian. If Hodge was in any way snobbish about poetry, it was never evident. I co-hosted Off The Wall poetry sessions with him for a few years, and he never once demonstrated any judgement towards any of the poems that were read, or the poets who read them. His partner, Julia Kramer, confirms that not even in private would he concede to preferences.

“When I said I didn’t like someone’s poem,” she told me, “he always said things like ‘everyone starts somewhere’ or ‘not everyone can like every poem’ or ‘there’s always someone for whom a poem is meaningful, even if it is not you’.”

The poet Jacques Coetzee notes that although everyone talks of Hodge’s gentleness, “people who knew him well would sometimes see flashes of something quite fierce in him in that space, and it always had to do with the fact that no one was allowed to feel more or less than anyone else there”.

He said the shape of the community he helped create was “an extraordinary feat of generosity, and we owe him a great debt of gratitude for it”.

Ndlovu recalls that Hodge picked up the torch of Off The Wall sessions from the well-known Capetonian Richard Ismail. According to Keith Gottschalk, an Off The Wall stalwart, poet and retired UWC lecturer, Ismail, a modest man despite his achievements, had been a logistics person for Umkhonto weSizwe, “running explosives into the Western Cape for MK, a seriously high-risk activity”.

Ismail ran Off Moroka, a café at the upper end of Adderley Street opposite St George’s Cathedral, and he was well connected. Gottschalk said many of the customers were MPs, parliamentary workers and their friends. Off Moroka was also popular among journalists, artists and writers.

For a few years, poet Primrose Mrwebi was his co-host. Poet Khadija Heeger writes that Off The Wall was “crazy – a beautiful mix of styles both contemporary, alternative and classic. Hugh is and was a great poet himself. Twinkle in his eye, six-foot-something, gentle, sharp wit. I always felt welcomed by him. He had the ability to make anyone feel seen.”

During his Off The Wall years, Hodge also served as the editor of New Contrast, the oldest literary magazine in South Africa, for five years.

Hodge was born at Tavistock in Devon, England, in 1946 and was brought to Cape Town as a babe-in-arms by his mother. His father joined them after he was discharged from the British Army during World War 2.

Kramer said that Hodge experienced his father, who made him weed the garden or recite poetry as punishment, as strict. Because of that, he was not terribly enamoured with poetry until his wife told him to stop fighting it and use what he’d learnt about poetry from his father, for pleasure.

Because of his father, Hodge could recite Ulysses by Alfred, Lord Tennyson – and many other classic poems – by heart, but his favourite poet was Ted Hughes. Many remember the readings he did in his strong, mellifluous voice of Hughes’ poetry, juxtaposed with the poetry of Hughes’ wife, Sylvia Plath.

The Hodge family moved to Kalk Bay from Plumstead around the time Hodge started high school at Rondebosch Boys’. Kramer said he often told her that one of the happiest days of his life was the first day he came home on the train from Rondebosch. “He said he practically started undressing on his way from the station, so that he could get into his swimming trunks and go to the beach.”

Hodge loved the sea, despite a near-drowning, and always wanted to be in the navy. While in South Africa, he mostly lived by the ocean.

When he left school, he went to England where he did all kinds of work, including as a drayman on a horse-drawn cart, delivering beer for a brewery. Later, he went to Essex University, where he received support to study Russian literature. He spent time in Russia learning the language.

He often read the work of Russian poets in translation and encouraged everyone at Off The Wall to read in any language they liked, without translation, whether the mainly English, isiXhosa or Afrikaans audience understood the poems or not.

Hodge returned to South Africa permanently in the nineties. He’d taught himself coding and worked mainly in IT, but poetry was his passion. Kramer said that the last time Hodge wrote a poem, an activity he undertook daily, was three weeks before his death, just before being admitted to hospital a few days after a fall in which he’d broken his femur.

He ran Off The Wall mostly on his own, except for two separate periods when Mrwebi and I were his co-hosts. In 2017, a committee took over the task he’d managed for many years. He remained on the committee.

Over the years, Hodge took Off The Wall to the Franschhoek Literary and the McGregor Poetry festivals. He ran Off The Wall sessions in Kalk Bay and in Kommetjie, alongside the weekly Monday evening sessions at Touch of Madness restaurant in Observatory, which is where the sessions from Off Moroka moved to after the café closed.

International poets like D’bi Young, Brian Turner, Raymond Antrobus and Jonathan Nkala performed or read at Off The Wall, as well as many of the jewels in the South African poetry crown, including Phillippa Yaa de Villiers, Gabeba Baderoon, Ingrid de Kock, Antjie Krog and Rustum Kozain.

Cape Town writer Barbara Fairhead notes that Hodge didn’t merely wait for poets to come to Off The Wall, but went out to find them. He “found” her at a reading she did at Meadowridge library. He approached her after her reading and invited her to come to Off The Wall. She said it felt like “the gentlest come-on she’d ever had”, only to find that Off The Wall really did exist and his approach had not been flirtation.

“He really did just want me to read poetry there.” Fairhead met her future husband at Off The Wall.

Almost every tribute to Hodge since his death has included the word “generous” in it. He has been described variously as kind, encouraging, open-minded, warm and “devilishly funny”. Coetzee said he’d “perfected the art of creating a safe environment without any fuss”.

Hodge, who lived in Scarborough, leaves behind his three children, Kellie, Tom and Zoë, seven grandchildren, a younger sister, Elizabeth Overton, and a younger brother Paul. He spent his final years with his partner Julia Kramer and will also be missed by her adult children. DM