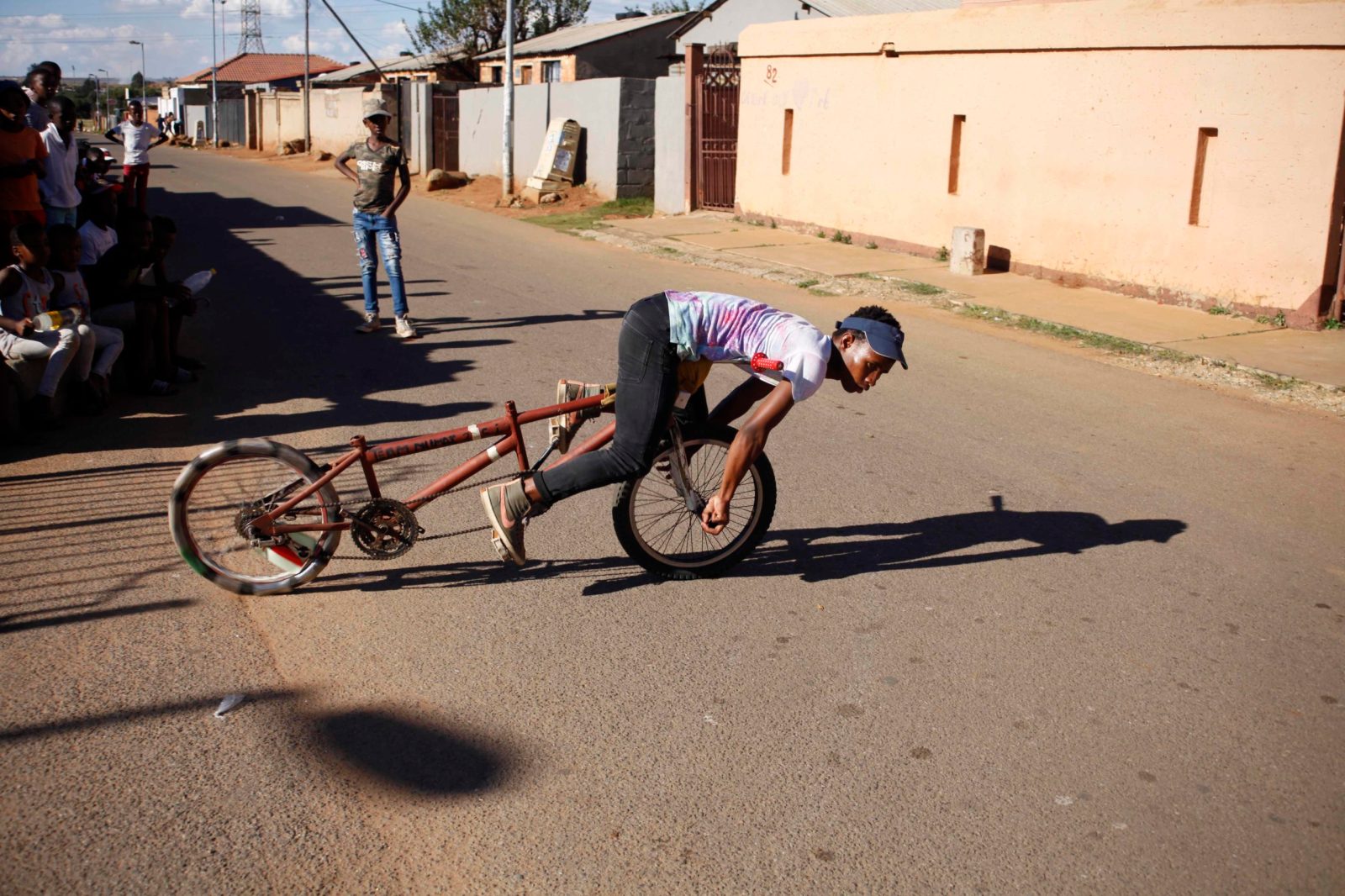 Makhwekwe has taught a lot of his peers to spin and they have gathered in Mndeni, Soweto to celebrate a 15- year-old birthday of one of their partners and showcasing their skills on the streets. 03/04/21 Photo: Oupa Nkosi

In Soweto, a new biking subculture phenomenon has emerged and daring riders are repurposing the streets.

Johannesburg is a city that is defined by money, class, style, clothes and the type of car one drives. In contemporary Soweto, swanky new shopping malls have engulfed the township and many apartheid “matchbox” houses have been refurbished. Shiny cars stream in and out on weekends causing traffic jams on the substantially improved main roads.

The roads that have been mostly dominated by cars for many years are slowly changing form. A new biking subculture phenomenon has emerged and the daring riders are repurposing the streets; they are still navigating a new path that has not been travelled before; they are young, creative, trendy, stylish, entrepreneurial, independent thinking, energetic and brave. And they are using the urban spaces to express their individuality, freedom and prowess.

“I started spinning bicycles in 2014 when my friends and I first saw (fellow rider) Makhwekwe spinning a bike in Mofolo. We got excited and wanted to learn how to do that,” says 18 year-old S’phiwe Ndaba, who is popularly known as “Biggy” among his peers – a name he got from his father for being a chubby baby.

He confesses that by then he was already into bicycles and was able to do twists, but was amazed that the bicycle could spin. They immediately befriended Makhwekwe and implored him to teach them. “We used to spin on the dusty ground before Makhwekwe introduced the bottle plastics on the bicycle wheels so that it could spin smoothly on tarred ground. That’s how we ended up spinning on the streets,” he says, smiling.

They learnt to do doughnuts, snakes, eights and kitchen tricks. “Kitchen is when you are riding a bicycle fast and turn quickly and the doughnut is when you do circles many times without stopping,” he explains.

“I like spinning because many people go crazy when you do it and it also encourages the young kids to believe that things are possible. This is something that keeps them entertained and safe from drugs,” Ndaba says while fixing a chain that is to be fitted on a rather weird-looking extended bicycle called a double-bike.

A double-bike is a bicycle that is cut in half and meticulously joined with another bike. It is ridden while standing with the upper body resting on the handlebars while cycling and controlling the wheels. It requires stamina, fitness, patience, bravery and the ability to think quickly.

These strange-looking bikes with an extended chain and mostly ridden without saddles, have spread all over Soweto to neighbouring townships such as Tshepisong, Kagiso, Lenasia, Orange Farm, Eldorado Park and as far as Tembisa.

But there is another group that prefers riding normal bikes – but with a personal touch to suit the owner’s style or persona. They don’t spin, their bikes are for flexing and the owners’ egos are amplified when admiring young fans go crazy about which bike they wish to have.

Depending on individual tastes, the bicycles are beautifully modified with rims, cranksets, brake calipers, chain rings, grips, steel pegs, number plates and more; to top it all, a blaring wireless speaker is a must. All of this comes with a huge price tag and a lot of sacrifice.

Like Ndaba, some of the bikers have learnt to fix their own bicycles. “When I was doing Grade 10 in 2018, I saw the mechanic working alone at night at his home along our street and decided to assist him with a flashlight. The next day he asked me to come work with him and that is how I started fixing cars,” he says. Now, with support and encouragement from his parents, he has enrolled for a mechanical engineering course in 2022.

“Spinning” came to prominence in the late 1980s as the rise of gangster culture coincided with the release of the BMW 325i and 325iS, known colloquially as iBotsotso and iGusheshe, respectively. In its earliest phases, spinning was often associated with hardcore criminals from the townships who went to town to steal cars or to rob. It was also synonymous with nighttime events held in secret, with black people performing stunts as an act of defiance against the apartheid government. It was also about the appropriation of cars that were status symbols.

Today, spinning has morphed into a sport business with rules and even great remuneration. It is a celebrated cultural phenomenon that is featured in films and music videos and has turned the drivers into celebrities and role models to township youngsters.

Team Brooklyn is what Ndaba and his team called themselves. They appropriated the name from the notorious BMW number plate. “This car has encouraged us to spin like it,” he says with admiration.

On a Tuesday afternoon, 27 April, Thokoza Park in Rockville was abuzz with activities. The mood was jovial and the weather was warm. While others were braaing meat and enjoying drinks, the bikers celebrated the holiday slightly differently. Team Brazil, Team Numbi, Team KSR, Team STC, Team STN, Team Docici and many others, came to show their support and love to their hosts Team Brooklyn.

The Soweto Bike-off Festival was held at the basketball court for the safety of riders. “I was the first one to host spinning at Thokoza Park last year because I realised how dangerous it was spinning on the streets. Some riders have been killed by passing cars. So, I found this venue and started hosting events because it was safe,” says one of the event organisers, Moeketsi Mafoko aka Veto.

This intense, adrenalin-pumping sport can sometimes be fatal: one rider from Tshepisong has died and three, including Ndaba, have sustained serious injuries from passing cars.

In April, Lali Street came to a sudden halt with bikers feeling it up and fans enthusiastically cheering and pointing at their favourite bikes. Different types of bicycles graced the event and fans were spoilt for choice. Passing cars slowly and carefully drove through the crowd.

The riders looked and felt like superstars. Some were dressed in designer clothes but most of the attendees were not wearing masks, contrary to what the invitation demanded. But that did not dampen the excitement and eagerness of the crowds, who went berserk when Kamva Ngonyama (17) arrived, riding a maroon, seven-inch dropped bike dragging a trailer. “My bicycle is this small because it’s a new style. As you can see, it’s dynamite, it’s killing,” he says proudly. He introduced a trailer to set himself apart from the rest and to set the bar higher. “I decided to include the bike seat and a trailer since no one was doing it. So, I’m the first to do this,” he says while pulling a spliff from a hookah.

Mpho “Mphoza” Dlamini (16) from Lenasia also owns a small bike with exaggerated handlebars; he has saved up his school lunch money and did odd jobs so he could pimp his ride. “I used to easily get tired when I was riding my bike with normal handlebars. So the idea of extending them was the only option and I do not regret the decision because now my bike is more (recognisable).”

“I started riding when I was three years old with a bike that had supporting wheels on both sides and I’m now 16 years old,” says another rider, Nkosinathi Malibe. His father, also a bicycle enthusiast, has been buying him a new bike every Christmas, while his mother, Toto Thabethe, gives him some money to modify them.

“Yesterday, I gave him money with an open heart to go buy parts for today’s event. I’m glad that the kids are doing something for themselves and that they have organised such an event instead of experimenting with drugs,” she says. She attended the event to support her son and his team.

Besides spinning and showing off, there was also a sound competition among the bikers to see who had the loudest speakers. Ndaba hopes the “whole world (can) see what we South Africans are capable of doing. I hope this could spread to all corners of the world.” DM/ML