Former general calls for thorough investigation into Battle of Bangui, in which 15 South African soldiers died 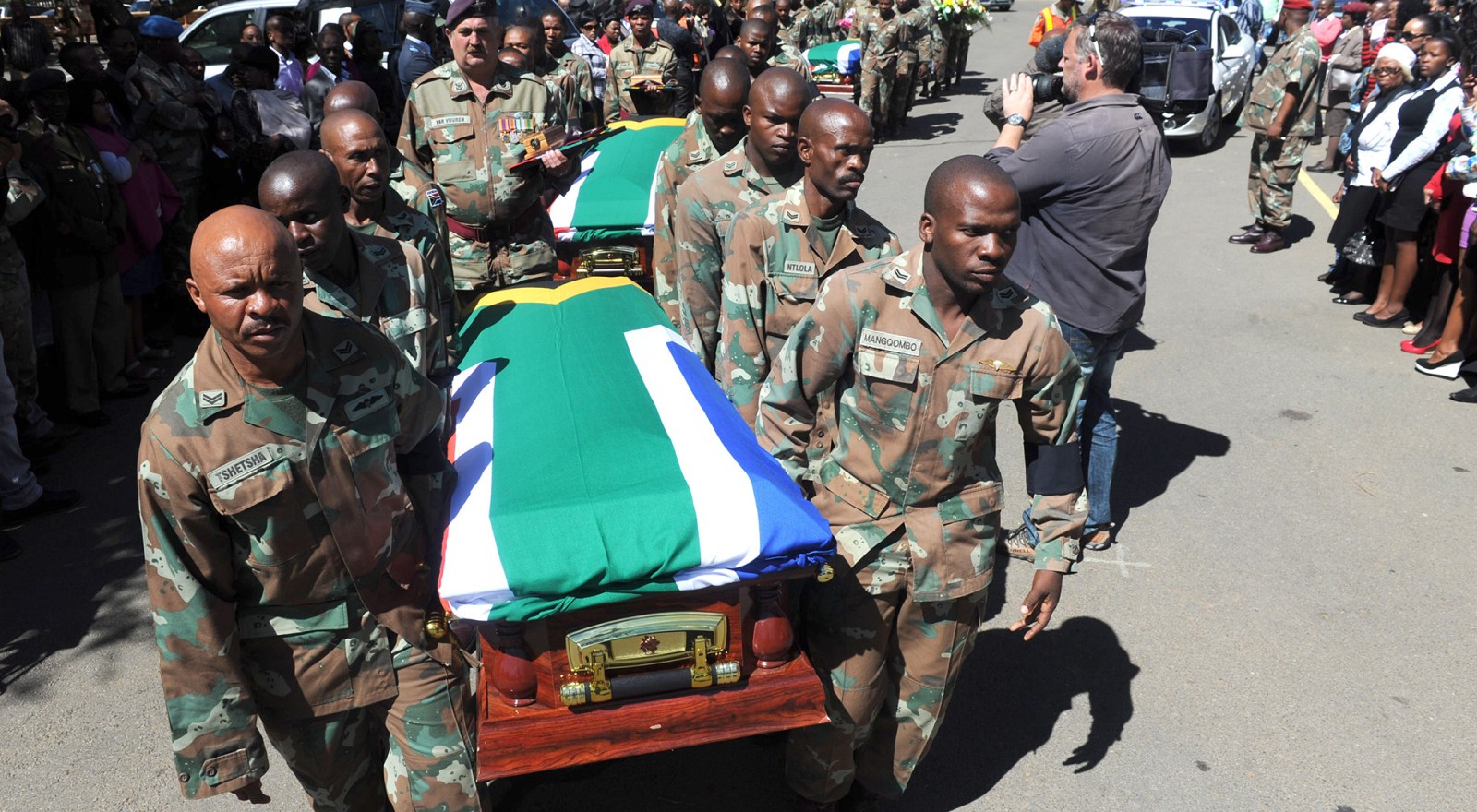 Soldiers carry the coffins of their comrades to the Bloemfontein funeral service on 6 April 2013 for 13 SANDF soldiers killed in the Central African Republic Battle of Bangui. (Photo: Gallo Images / Foto24 / Emile Hendricks)

A retired top South African military general has called for a thorough and independent public inquiry into the circumstances surrounding the 2013 Battle of Bangui, in which 15 South African soldiers died and many were injured during a firefight with Seleka rebels in the Central African Republic (CAR).

Retired Major General Ashton Mlindeni Sibango, who was director of joint operations in the SA National Defence Force at the time of the Battle of Bangui, has accused the government and Parliament of failing to investigate the incident properly, or to provide adequate compensation to the wives and children of the soldiers who died or were injured.

In an open letter to Parliament’s joint standing committee on defence, Sibango called for a full multidisciplinary investigation of several different government departments and parliamentary oversight committees, headed by a state advocate or judge, to re-examine the incident.

This would hold accountable the political and military leaders responsible and bring national closure to what he calls the “unfinished business” of “a mission too far”.

Sibango said South Africa needed to know why its troops were in CAR in the first place and why they had not been properly reinforced before they came under attack outside Bangui in March 2013 — despite the SANDF having been “flooded” with intelligence, warning of an imminent threat.

Sibango also said there had been “wide speculation” that some SANDF soldiers had been executed in cold blood by Seleka rebels after they had been injured or had surrendered. This claim should also be investigated and if confirmed, should be referred to the International Criminal Court (ICC) for further action.

A small contingent of SANDF troops was sent to CAR in 2007 by President Thabo Mbeki’s government to provide security for President François Bozizé and wider military training.

In the face of a growing rebellion by the mostly Islamic Seleka rebels, President Jacob Zuma’s government made the fateful decision to reinforce rather than withdraw the SANDF soldiers in January 2013.

The reinforcements were insufficient and when the SA troops encountered Seleka rebels advancing on Bangui in March 2013 to topple Bozizé, the SANDF soldiers were vastly outnumbered and lacked the necessary armament to properly defend themselves.

They were overrun, losing 13 soldiers on the field and another two who died from their wounds later — though they fought back fiercely, by Sibango’s and many other accounts, and killed many more Seleka rebels than they lost themselves.

Sibango said the proposed national inquiry should also examine claims that the CAR mission was intended to serve personal and political party interests rather than the national interest. There was unconfirmed speculation at the time that the troops were protecting Zuma family commercial interests in CAR.

Sibango also berates the SANDF command and the government for failing adequately to compensate the dependents of the 15 soldiers who died or were injured. He said he was told that the widows of the fallen soldiers had received a “ridiculous and laughable” R200,000 each.

He told Daily Maverick that the government had offered no compensation at all to those who suffered permanent disabilities in the battle. One of those had privately negotiated with the government and had received “a lousy R47,000”, while another had launched private litigation for compensation. He did not know what the outcome had been.

It was “mind-boggling” that soldiers who had put their lives on the line in answering the call to national duty had then had to initiate claims for compensation themselves. “Where is the element of ‘looking after the welfare of troops’ which is one of the primary guiding principles in military leadership?” he asked.

Sibango said the families of each of the fallen soldiers should instead receive R2-million and each soldier permanently disabled should receive R1-million.

Sibango said that “constitutional and legislative protocols seem to have been flouted” in deploying the SANDF to CAR because neither the executive nor Parliament had been properly consulted — possibly to hide the real motives for the mission.

This failure was seemingly further compounded in the “clumsy, dubious and secretive” execution of the deployment, which showed poor leadership and lack of professionalism by the executive and the SANDF.

Sibango calls the CAR episode a “mission too far”, “complicated and expensive”, marred by a “lack of understanding of the political dynamics at play both of the colonial master and of sub-regional leadership”. This seems to be a reference to France, the former colonial power in CAR and regional leaders such as the then Chadian President Idriss Déby, who was widely suspected of backing the Seleka rebels. Sibango says Seleka were “sponsored by one of the international powers and leaders of the regional block”. There is no evidence that France backed Seleka, if that is what he is suggesting.

Sibango said that after the SANDF joint operation division received intelligence from the first week of March 2013 about an imminent attack, junior officers did “solid work” to prepare contingency plans to mitigate the threat.

But senior military commanders ignored those plans, insinuating that the junior officers were “alarmists, being sensational and overreacting on unsubstantiated information”.

“Nothing will happen to our troops,” a general said at the time, Sibango wrote.

Military expert Helmoed Römer Heitman told Daily Maverick that if the special forces group and parachute combat team sent into CAR in January 2013 to reinforce the original training mission had been replaced by at least a full infantry battalion or battalion group with some armour and air support, Bangui probably would not have fallen and no South African soldiers would have died.

The special forces and parachute team should at least have been strengthened with some Mamba armoured personnel carriers, helicopters and reconnaissance aircraft.

Aerial reconnaissance would have warned the SANDF commander Colonel William Dixon that Seleka was rapidly advancing on Bangui, which he did not know until his troops ran into the rebels. Mambas would have prevented most of the deaths, which had been caused by small arms fire, that would not have penetrated the Mamba’s armour plating, Heitman said.

Heitman also believes that the French, who had troops in CAR, warned the SANDF twice of an impending threat from Seleka. But the information was not passed on to Dixon, the force commander.

Instead, the military commanders were allowed to investigate themselves. “Can the nation safely say it has a military to safeguard its national interests, with the demonstrated attitude and leadership at the expense of the lives of our troops in the Central African Republic?” Sibango asked.

He told Daily Maverick that he had received some acknowledgements of the receipt of his letter from MPs on Parliament’s defence committee, but nothing from the government.

Defence Department spokesperson Siphiwe Dlamini said, “The Memorandum by Major-General Sibango has been noted by the Department of Defence. It shall be tabled at the Command Bodies meeting on Monday for processing.”

Sibango said he had copied his letter to Minister of Defence and Military Veterans Nosiviwe Mapisa-Nqakula and “it is normal practice for her to soundboard with her command bodies in order to gather facts for her response”.

Democratic Alliance defence spokesperson Kobus Marais said Sibango’s letter should be used to draw lessons in crafting a new defence dispensation, in restructuring and prioritising the SANDF’s focus and attention.

These lessons could be applied in northern Mozambique, if the SANDF were deployed there as part of a standby force of the Southern African Development Community to combat Islamic State-affiliated insurgents.

SADC leaders agreed to the deployment of the regional force at a summit in Maputo on Wednesday.

“Should our soldiers be deployed, then the memo can be an excellent tool to request submissions to Parliament to assure the same mistakes are not made,” Marais said.

But he expressed doubt that the political will existed to expose the ANC’s bad judgment in the CAR disaster.

“It’s a disgrace how real military vets and their loved ones are treated, especially the families of the fallen ones,” Marais added. DM