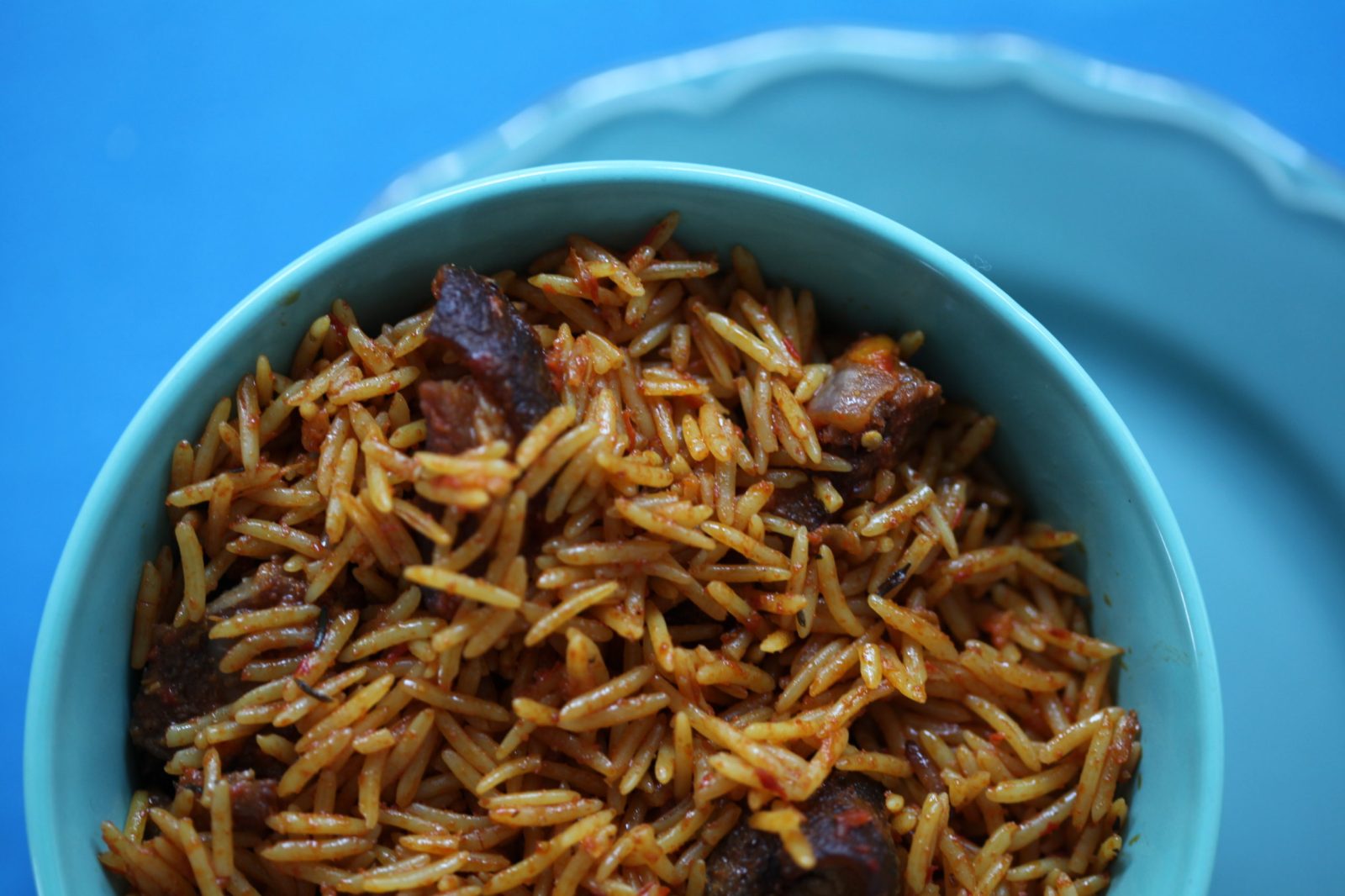 A recent cooking competition serves as a delicious reminder that similarities and differences can coexist. ‘Jollof war’ tournaments are taking place everywhere from Brooklyn to Beijing. And now Johannesburg.

The author supports Yeoville Yeoville Meals on Wheels who distribute food parcels to the elderly and needy.

Jollof wars have come to Joburg! This food fight centres on which West African country makes the best version of the region’s great ancient rice recipe. The epicurean argument – which is at its most intense between the area’s economic powerhouses, Nigeria and Ghana – has been dished up in domestic settings since time immemorial but it has recently morphed into memes, hashtags and formal culinary competitions.

Organisers of the event, Adetunji Omotola and Maleshane Makhale, explicitly aligned their Jollof rice competition to the African Union’s declaration of 2021 as the “Year of the Arts, Culture and Heritage: Levers for Building the African we want”. If the tastes coming out of this cooking contest are anything to go by, the Africa we want is not only ancient and authentic but also modern, full of fun, delicious and internationally accessible.

For those who are unfamiliar with Jollof rice, suffice it to say that it is a fragrant, spicy, tomato-infused, one-pot mélange which is revered across West Africa. The name “Jollof” is thought to be derived from the word “Wolof” which refers to the medieval state (where wealth was built in part on trade in indigenous African rice varieties) with cultural influence throughout West Africa. Wolof is also the name of the language which, even today, is the lingua franca of Senegal and parts of Gambia. Food historian Jessica Harris argues that the recipe which Senegalese people label variously as thiebou djenne/ thieboudienne/ tchep djeune and Gambians call benachin is probably the original iteration of Jollof. She believes that the name used to describe all subsequent versions made outside of Wolof territory – the rice of the Wolof/ Jollof – is an acknowledgment of ancestry.

Jollof rice is made and loved in Ghana, Nigeria, Cameroon, Mali, Benin, Sierra Leone, Liberia, Togo and Ivory Coast but there are regional differences in types of rice, spice, oil, stock, meat and/or fish used. The basic ingredients and method are sufficiently similar for all such offerings to be mutually acknowledged as variations on a theme. There are also transatlantic culinary cousins in the “red rice” recipes made in Georgia and South Carolina but that is a story for another day…

When it comes to different communities making similar recipes, we are used to bitter arguments about ownership/ who made it first. Intense historical, political, economic and emotional issues pertaining to dispossession and exploitation are blended into every spoon of Palestinian / Israeli hummus and fried into each contested Cape Malay koesister/ Afrikaner koeksister.

Conversely, most West Africans are relatively relaxed about sharing Jollof rice. Almost everyone acknowledges Senegambia’s claim to being the first so when the regional economic powerhouses, Ghana and Nigeria, compete the issue is who does it best, not who did it first. And everyone involved is enjoying themselves. The only time that the joshing over Jollof got angry was in 2014 when Jamie Oliver published a recipe that he called Jollof rice which included cherry tomatoes, coriander and parsley. The ensuing Twitter storm, #jollofgate, offers insight into why some food fights are bitter and others sweet. Essentially the anger in a food fight appears to be in direct proportion to the danger of economic and cultural expropriation and exploitation. When the power dynamic between cooks is unequal and without mutual respect, food fights are no longer fun.

All Jollof makers add individual twists but as broad national stereotypes Ghanaians tend to favour Basmati (which Nigerians say makes their Jollof too starchy) while Nigerians use sturdier, par-boiled rice grains (which Ghanaians complain are fat and flavourless). Nigerians add bay leaves and thyme. They also seek to create a crisp, slightly burnt crust at the base of the pot in order to impart an assertive smoky flavour – this is true of all Nigerian Jollof but especially so with “party Jollof” made over firewood for large gatherings. When there is no time for a fire, smoked paprika is often added to create a similar taste. Ghanaians abhor the smokiness of their regional rivals and instead add warm spices (such as clove, nutmeg, cinnamon) and shito (a condiment made with hot peppers, ginger, shrimps and onion). Nigerians are very fond of Maggi cubes whereas Ghanaians pride themselves on making their Jollof with stock from the protein in the pot.

The (relatively) amiable insults are everywhere and incessant. Here are a few of my favourites. In 2016 Accra-based international influencer Sister Deborah sang: “Ghana jollof, Ghana jollof, Ghana jollof – yummy! Nigerian jollof is just funny.” And later: “Ghana jollof on fleek – yours isn’t.” The music video for this ditty showed Nigerian men falling for Sister’s charms as she intoned: “I have d’ secret recipe, no Maggi cube, when your Naija boy chases me don’t blame juju.”

Almost immediately the Nigerians struck back with a Star Wars themed YouTube clip showing a lightsaber fight between jollof warriors. Even the pandemic has not dimmed the diatribes – there is a recent Tik Tok video in which a Nigerian man worries that he might have Covid-19 because his Jollof rice has no taste…but then he remembers that his wife is Ghanaian.

At the June 16 Johannesburg Jollof rice competition contestants were given 90 minutes to show off their skills. The jovial mood was maintained even when judges (South African Palesa Ryan from the Development Bank of Southern Africa and Congolese Chef Demulu Humba) declared the winner to be Ghanaian Florence Ansah from Divine Touch Catering in Pretoria with her fellow country woman Phyllis Qua-enoo (from Peq’s Food, Midrand) coming in second. Nigerian Jumoke Ojetimi of Jummy’s Kitchen restaurant, Sandton took third spot. Chef Ansah won R8,000 in cash (care of sponsor MTN) and a luxury weekend away from the Prest Lunch and Dinner Cruise Company. All contestants received Kente cloth and artisanal chocolate from Madam Hilda Hinidza-Elluh, Minister – Counsellor, Ghana High Commission.

After eating the contents of the winning pots guests were replete with warm flavours and feelings. As Maleshane Makhale observed: “Jollof is good for us as Africans. Not only does it taste delicious but it is philosophically important too. It is easy to get caught up in divisions and Jollof rice reminds us how even within our differences there are commonalities. It highlights connections going back across time and crossing over countries. It demonstrates that the borders as they are today and the alliances that now exist were not always as they are now. We need to keep coming back to that – especially after what happened recently at the Pan-African parliament…”

Not in the mood for eating out? The recipe below comes from Nigerian-born chef and New York Times food writer Yewande Komolafe (www.yewandekomolafe.com). This is a meat-free version so sometimes I add either beef, chicken or seafood.

For the obe ata (tomato base):

1 x 400g can whole peeled tomatoes with their juices

2 tablespoons canola or other neutral oil

For the Jollof rice:

½ cup canola or other neutral oil

Obe ata: Combine all the obe ata ingredients except the canola oil in a blender and purée on high until smooth. The liquid from the can of tomatoes should suffice, but you can add up to ¼ cup of water if necessary to get the purée going. (You should have about 3 cups of purée).

Heat the 2 tablespoons canola oil in a medium saucepan over medium-high. Add the purée and bring to a simmer. Reduce heat to medium, cover and simmer until the sauce is slightly reduced by about a third of its original volume, 18 to 20 minutes.

Rice: Heat the oven to 180℃. Heat the ½ cup canola oil in a large ovenproof dish with a lid over medium until shimmering, about 1 minute. Add the onions and cook, stirring frequently, until softened, 6 to 8 minutes. Remove half the onions to a plate and set aside. Add the garlic and sauté until fragrant and translucent, about 2 minutes. Add the tomato paste, turmeric and smoked paprika, if using, and toast, stirring occasionally, until turmeric fragrant, tomato paste has deepened to a dark red color, about 2 minutes.

Stir in the obe ata sauce and bring to a simmer over medium heat. Stir in the rice, thyme and bay leaf, and season with salt and pepper. Stir in the stock and cover with a lid. Transfer the pot to the oven and cook until rice is just tender, 35 minutes.

Remove the pot from the oven and let sit, covered (no peeking) for 15 minutes. Uncover, fluff the rice with a fork and stir in the reserved sautéed onions. Adjust seasoning, if necessary, and discard the thyme sprigs and bay leaf. Serve warm. DM/TGIFood