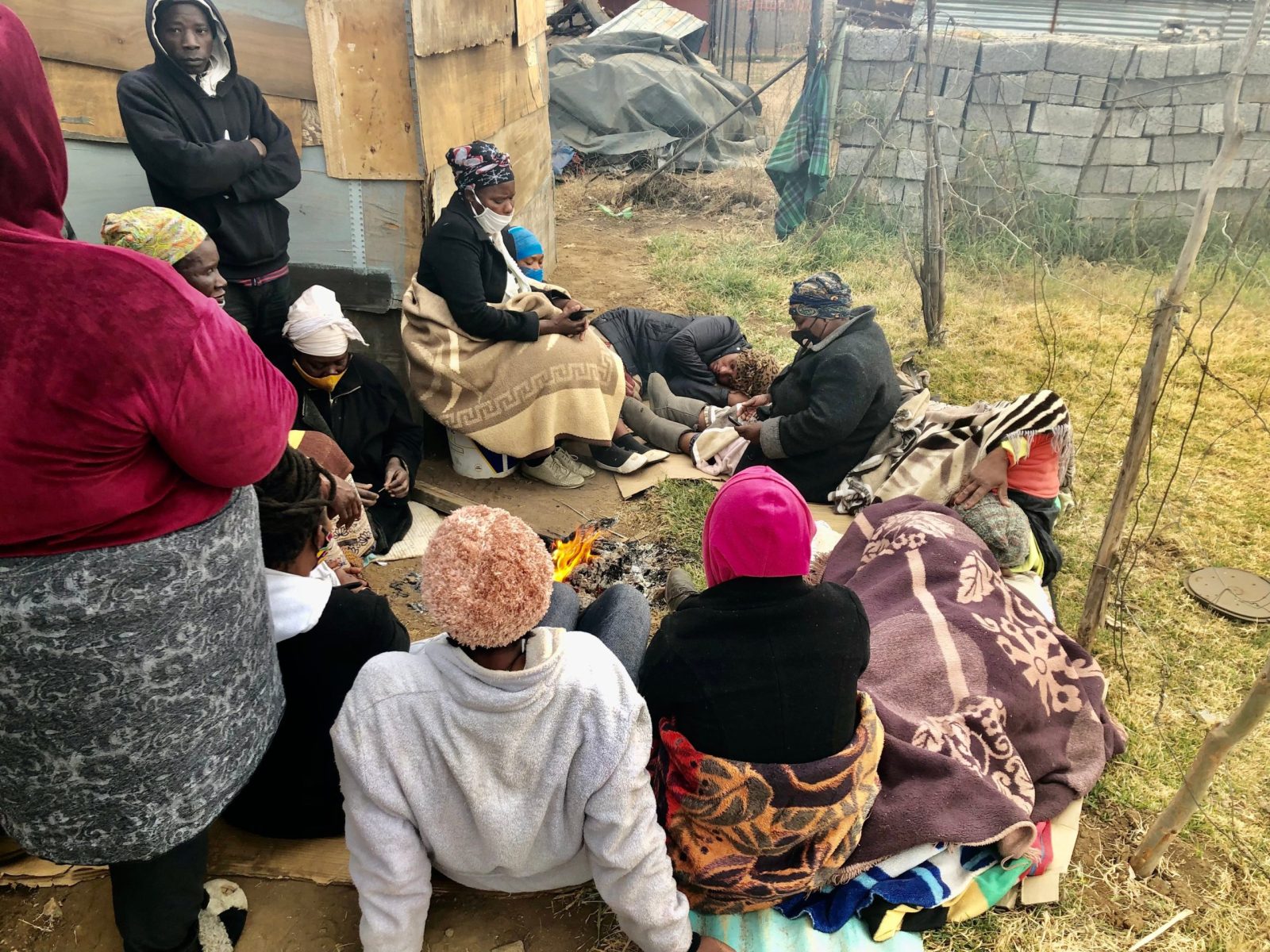 Some of the Marikana informal settlement in Tsakane, Gauteng huddle around a small fire to keep warm. Their shacks were demolished earlier this week and because most of them are unemployed or rely on peacemeal jobs, they are unable to rebuild their homes. (Photo: Kimberly Mutandiro)

Ekurhuleni spokesperson says they were evicted because their occupation was illegal but admits housing backlog was ‘not being eradicated at the pace the homeless community would like to see’.

It’s 7:30am and Tinita Zunguzu wraps a small blanket tightly around herself while lying on the ground next to a small fire she managed to make. She barely slept that night as the small flame barely kept the bitterly cold winter air at bay.

Zunguzu’s home was among 30 shacks at Marikana informal settlement in Tsakane, Ekurhuleni that were destroyed by metro police this week. Last Thursday, another 60 shacks were also demolished. Since then, residents like Zunguzu who can’t afford to buy more material to rebuild immediately have been sleeping outside on the field at the spots where their homes once stood.

Most of the occupants are immigrants from Mozambique and Swaziland. During the first few days after demolitions, they cooked together and shared food. Now there is nothing left.

“How can one fall asleep with no blanket? We rather give our few blankets to children who sleep on the opposite side where we also light a fire with some of the wooden remains of our [demolished] shacks,” says Zunguzu. Her six children have been going to school without having had something to eat since Monday. While the children receive meals at school, they only attend three times a week.

Her family survives on the little she makes selling vegetables but business has been slow since the start of the pandemic. “I occupied land in the hope of eliminating the burden of paying rent. With six children there’s barely enough to eat. Before the pandemic, all was well but now fewer people buy vegetables.”

Another occupier, Veronica Khoza, said she lived in her shack for three months before it was destroyed. “I have a few warm clothes. The cold is killing me. We try to make a fire but with little firewood, it hardly lasts the night,” she says.

Asanda Dhlamini lived with her four children. She recalled the day of the demolition when the children returned from school and their homes had been reduced to rubble scattered on the ground. “The memory pains me,” she said.

“My younger kids have been crying themselves to sleep for the past few days. They have been asking why we are sleeping outside and what happened to our home? Sometimes l find them playing on the small portion of land where our shacks used to stand. But there is nothing we can do now.”

Dhlamini is unemployed. Before the pandemic, she used to clean people’s homes or do their laundry. “Now it is hard to find just one cleaning job per month,” she says.

“My children drink water before going to bed because there is nothing to eat. It’s better on the days when they go to school because they have morning and afternoon meals there,” says Dhlamini.

He acknowledged that there was a housing backlog in the province and that the problem was “not being eradicated at the pace the homeless community would like to see”.

He said subsidised housing developments would only be implemented as suitable land and budget became available. DM