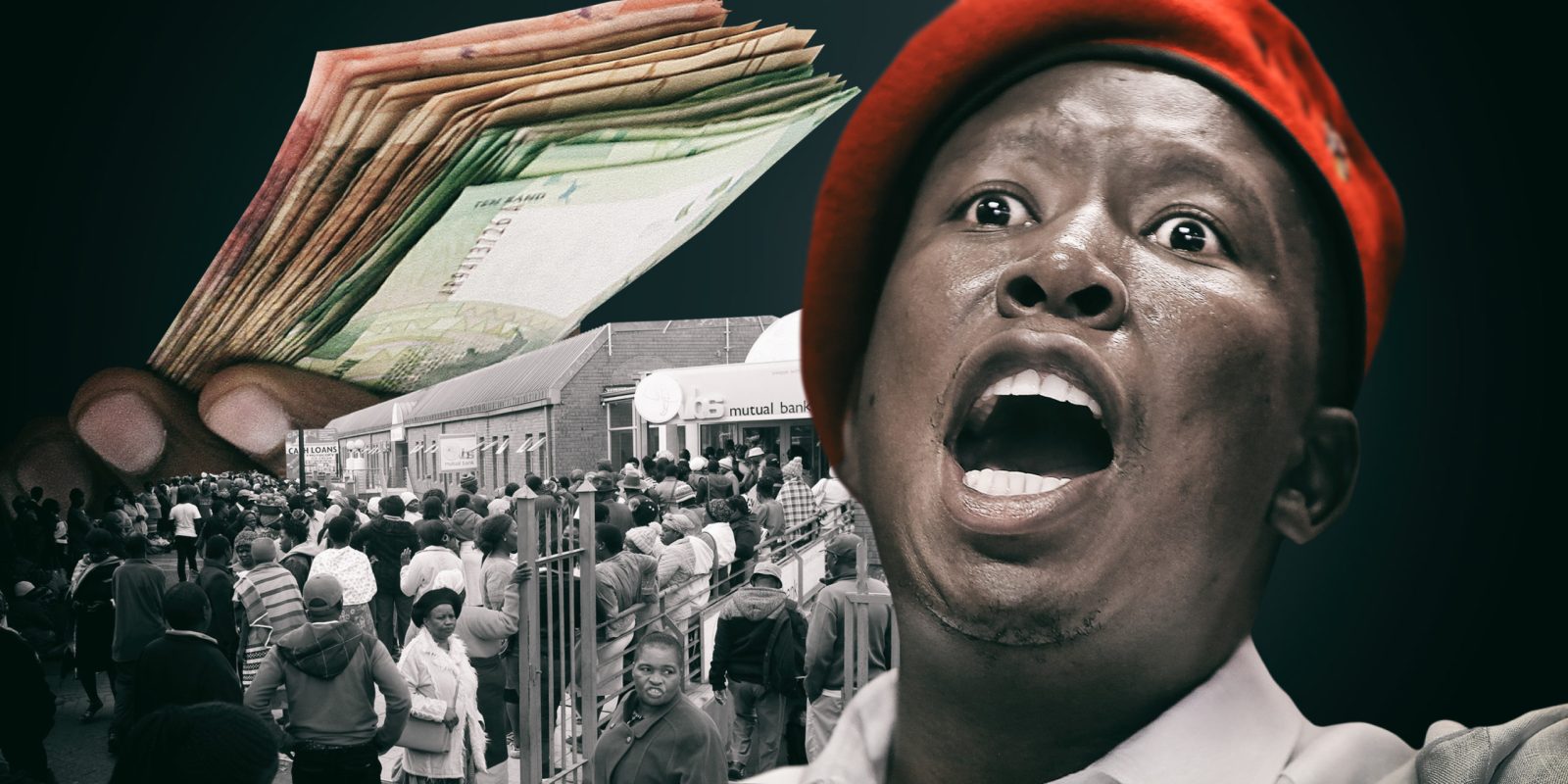 Julius Malema received a smackdown from the Supreme Court of Appeal on Wednesday in his R1-million defamation case against former top EFF member Thembinkosi Rawula.

Four Supreme Court of Appeal (SCA) judges made short shrift of Julius Malema’s “bald denials” this week when the court held that it would not declare former EFF member Thembinkosi Rawula’s Facebook post – in which he accused Malema and his deputy, Floyd Shivambu, of using EFF funds for their personal benefit – to be unlawful and defamatory.

Based on two corroborating affidavits and without the benefit of any explanation from Malema, the SCA found that he “apparently had no difficulty in accepting funds that were the subject of corruption as an opportunity for the EFF to be in government”.

Said media lawyer Dario Milo: “The SCA held that an interdict could not be granted because Rawula had laid a foundation for a defence of truth to be asserted.”

The court decided that Rawula’s version of events “wasn’t so far-fetched as to be rejected”, albeit that the court did not go so far as saying Rawula’s statements were indeed true, Milo continued.

During his argument, Malema’s counsel dropped his claim for R1-million in damages as well as the demand for a retraction and apology and an interdict against further publication of the Facebook post.

What was left for the court to decide was Malema’s demand to declare Rawula’s Facebook post unlawful and defamatory.

In a majority judgment written by Judge Ashton Schippers, this, too, was dismissed.

Rawula used to serve on the EFF’s highest decision-making body, the Central Command Team (CCT), he represented the party in Parliament and was the national chairperson of the EFF’s National Disciplinary Committee. He sat in a privileged position, the court found, that made him privy to information that few people could access.

The beginnings of the court saga date back to February 2019, when Rawula baulked at Malema’s attempt to draw the EFF leadership into a “collective responsibility” for receipt of stolen VBS money. At a meeting, Malema explained to the CCT that he, Shivambu and the EFF did indeed receive loot from VBS Mutual Bank, Rawula claimed.

Malema’s reason for accepting the VBS money, Rawula said, was “to support the revolution”.

(VBS Bank was defrauded by its managers, lawyers and auditors, as well as ANC and EFF politicians and politically linked businesspeople between 2015 and 2018.)

The SCA found, notably, that Malema must have known the money was the proceeds of crime because he attempted to hide its source by employing money laundering tactics.

In a handwritten affidavit, Xalisa said Malema, at a CCT meeting, “made an admission that the EFF had received donations from VBS which is the subject of corruption. He said that no capitalist or government is willing to support a revolutionary movement like EFF so VBS saw an opportunity that the EFF could be in government, it could assist to ensure that it thrives better.”

Even more interestingly, Xalisa stated that Malema “confirmed that they could not receive the donation with [the] EFF account of theirs (him and Floyd Shivambu) but had to devise other means, he said sometimes you must kiss dogs or the devil to get money…”

Malema then wanted the entire CCT to take “collective responsibility” for receiving the VBS loot.

On 5 April 2019, Rawula published a Facebook post in which he accused Malema and Shivambu of being corrupt, of laundering money and of contravening a cardinal pillar of the EFF’s constitution – fighting for an anti-corrupt society.

“All these [monies] are centralised in the EFF under the control, abuse and dictatorship of Julius Malema and Floyd Shivambu,” he wrote.

“Bring it on, insult me.

Rawula argued that the EFF had failed the moral test it set for itself and society.

He deleted the post later, but never backed down from its consequences in court.

By then, Daily Maverick’s investigative journalist Pauli van Wyk had written several articles proving that, while Malema and Shivambu were positioning themselves as the moral leaders of the oppressed, they were knowingly participating in the fraud at VBS. The loot propped up their lifestyle and political aspirations.

Public pressure on Malema was piling up. He promised to show journalists the EFF’s financial statements, but for obvious reasons did not do so.

“Tellingly”, the SCA noted, Malema did not attempt to sue Daily Maverick, Van Wyk or any other media for defamation or to interdict any further articles. Malema also did not claim any damages.

Instead, he gunned for Rawula. Malema realised he would never survive a discovery process against Daily Maverick or Van Wyk. So, in a cowardly fashion, he picked on someone whom he knew did not have the funds to fight him in court.

Rawula had no lawyer representing him at the SCA, but indicated he would abide by the court’s ruling. Malema, on the other hand, had top-class advocates Tembeka Ngcukaitobi SC and Kameel Premhid fighting in his corner. But it is sometimes impossible, even for such heavy hitters, to defend the indefensible.

A moment should be had for Rawula’s steadfastness and bravery. Under enormous pressure from his former colleagues and co-“fighters for justice”, Rawula was the only person to stand up against the EFF leaders on matters of principle, personal price be damned.

In an affidavit before the high court, Rawula stated:

“…for the EFF to be mentioned in [a] corruption scandal involving the VBS which had carried the savings of poor people in Limpopo is unacceptable”.

Offering his reason for speaking out on Facebook, Rawula later explained in an answering affidavit:

“I have… every right to expose [Malema’s] leadership in the interest of the public as the public figure and public representative and most importantly as the leader of the political party that has mobilised the public on an anti-corruption ticket.”

From experience, Daily Maverick and Van Wyk know that it is not easy to stand up against the populist, cult-like figure of Malema, who can easily rally his troops to intimidate anyone on his behalf. For Rawula, who, because of his principles, found himself out of Parliament, out of a job and at the mercy of his former colleagues, it must have been a tough experience.

Much has been said and written in the past years about whistle-blowers and the harsh journey they embark upon when standing up for principle. Hopefully, Rawula will find an embrace he deserves, for having in his heart what it takes to stand up for what is right. South Africa needs more people like him.

As for Julius Malema and Floyd Shivambu, the VBS noose is ever-tightening.

Two weeks ago, Van Wyk exposed Floyd Shivambu’s brother, Brian Shivambu’s admission that he received R4.55-million from VBS for no valid reason, a devastating blow to the entirety of Malema/Shivambu explanations (and there were a few of those).

For a man gifted with an array of talents, Malema’s response to this crucial building block in the case against him was surprisingly, outlandishly pathetic: he likened Brian Shivambu’s “compromise” with Vele Investments with the compromise made in the early 1990s between the ANC and NP that made modern South Africa possible.

Go figure. The logic behind this will probably remain forever hidden, even to the EFF’s commander-in-chief himself.

Wednesday’s SCA decision has blown open another heavy door into the heart of the Malema/Shivambu corruption syndicate. Coupled with Brian Shivambu’s “compromise”, it does not require for anyone in the NPA/Hawks/SAPS universe to use their imagination any more. This is now a case of simple arithmetic: 2+2=4.

The ball should now be firmly in the hands of the South African legal system.

The Third and Fourth Estates have done their job. South Africa now needs the First and Second Estates to do what’s right. DM