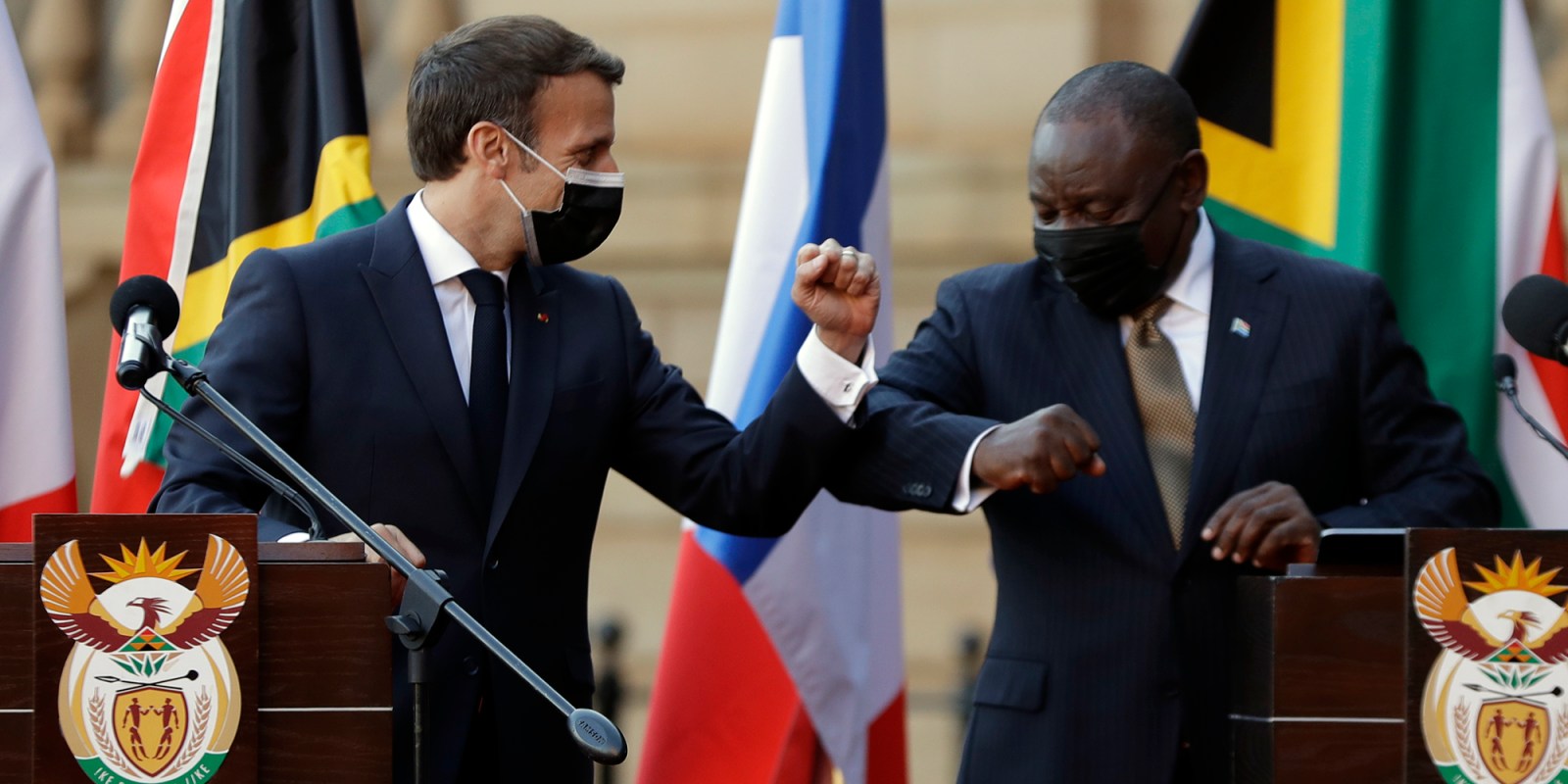 South African President Cyril Ramaphosa (right), and his French counterpart Emmanuel Macron bump elbows during a press conference at the Union Buildings, Pretoria on 28 May 2021. Beyond the shift from the African to the European Peace Facility, the EU is aiming for a more strategic and tailored partnership with African nations. (Photo: EPA-EFE / Themba Hadebe / Pool)

With political violence and terror attacks rising in Africa, negotiation and dialogue need as much attention as conflict management.

An important year lies ahead for European Union (EU)-Africa relations. Three major events are lined up — the launch of the EU’s proposed new partnership with Africa, the sixth EU-Africa leaders’ summit, and resolution of the post-Cotonou agreement. Cooperation on peace and security is an essential aspect of the relationship but is it enough, in its current form, to address instability in Africa?

The sixth leaders’ summit, postponed to 2021 due to Covid-19 and now moved to 2022, aims to strengthen EU-Africa ties. However, a date for the meeting hasn’t been confirmed, and crucial talking points such as the EU’s proposed strategy with Africa remain in limbo. Moreover, regional analysts question whether the summit will sufficiently cover the interests of both sides and address thorny peace and security issues.

Political violence, terror threats and instability are rising in Africa. The summit could find common ground on preventive measures that better serve the interests of both regions than reactive, conflict management responses. It could also help narrow down their differences on migration and displacement issues.

The planned summit comes as the African Peace Facility — the centrepiece of the EU’s support to the African Union (AU) — comes to an end. Since 2004, this funding mechanism has provided €3.5-billion to the AU’s peace and security infrastructure, including its peace support operations. In March, it was replaced by the broader European Peace Facility, which allows direct support to regional and national efforts.

The new facility has a greater funding capacity than its predecessor at €5-billion from 2021-2027. Nevertheless, there are concerns that it dilutes the AU’s coordination and oversight role and reduces institutional support to the AU Commission.

Beyond the shift from the African to the European Peace Facility, the EU is aiming for a more strategic and tailored partnership. According to the proposed EU strategy with Africa, this can be achieved by aligning both unions’ capacities and instruments and adhering to key tenets such as mutual ownership, commitment and accountability.

The strategy suggests three specific actions on peace and security: providing a more structured relationship; integrating good governance, democracy, human rights, the rule of law, and gender equality in action and cooperation; and securing resilience. The proposal also gives special attention to women and youth on peace and security issues.

These promises are good on paper, but delivering on them requires tackling four problems in EU-Africa relations. First, the regions’ inequality on economic and political power, and technological advancement, creates an asymmetric partnership primarily characterised by donor-recipient dependence. A notable result is the lack of adequate consultations with African counterparts.

A second problem is the AU’s capacity to manage the partnership, define its priorities and align them with those of the EU. While the EU created a delegation office to support implementation, the AU doesn’t have a similar structure and staff to deal with this particular partnership.

The third problem is the AU’s continued dependence on external financing for its peace and security activities, despite some improvement in recent years. Last, EU-Africa relations have only marginally supported conflict prevention, negotiation and mediation. While this is a perennial problem globally, the lack of attention is evident in Africa where state-based conflicts and political violence have spiked between 1989 and 2019.

The EU’s efforts in Africa have focused more on conflict management than prevention. An evaluation of the African Peace Facility from 2014-2016 showed that about 90% of its resources were spent on peace support operations.

There are, however, opportunities to improve the EU-Africa cooperation on peace and security. First of all, timing matters. The EU’s plan to strengthen its partnership with Africa coincides with ongoing reforms that should enhance the AU’s efficiency and implementation capacity.

Ambassador Bankole Adeoye, the new AU Commissioner for Political Affairs, Peace and Security, has made inclusive and smart partnerships one of his strategic priorities. To improve Africa-EU ties, the AU must complete the restructuring of its commission and increase its partnership management capacity. The reforms will enable common strategic priorities to be implemented and supported by the EU.

EU ambassador to the AU, Birgitte Markussen, says sustained EU-Africa political dialogues could “enhance visibility among the people of both continents.” This would help fix the problem of inadequate consultations with African stakeholders and create shared understandings from the start.

EU and African leaders should recommit to a common strategy and implementation mechanisms that prioritise timely conflict prevention. This will require the EU, AU and regional economic communities to invest in national dialogues, negotiations, mediations and tools to ensure parties abide by the agreements reached. DM

This article is published as part of the Training for Peace Programme (TfP) funded by the government of Norway. A version of this article was first published by PeaceLab.Blog.