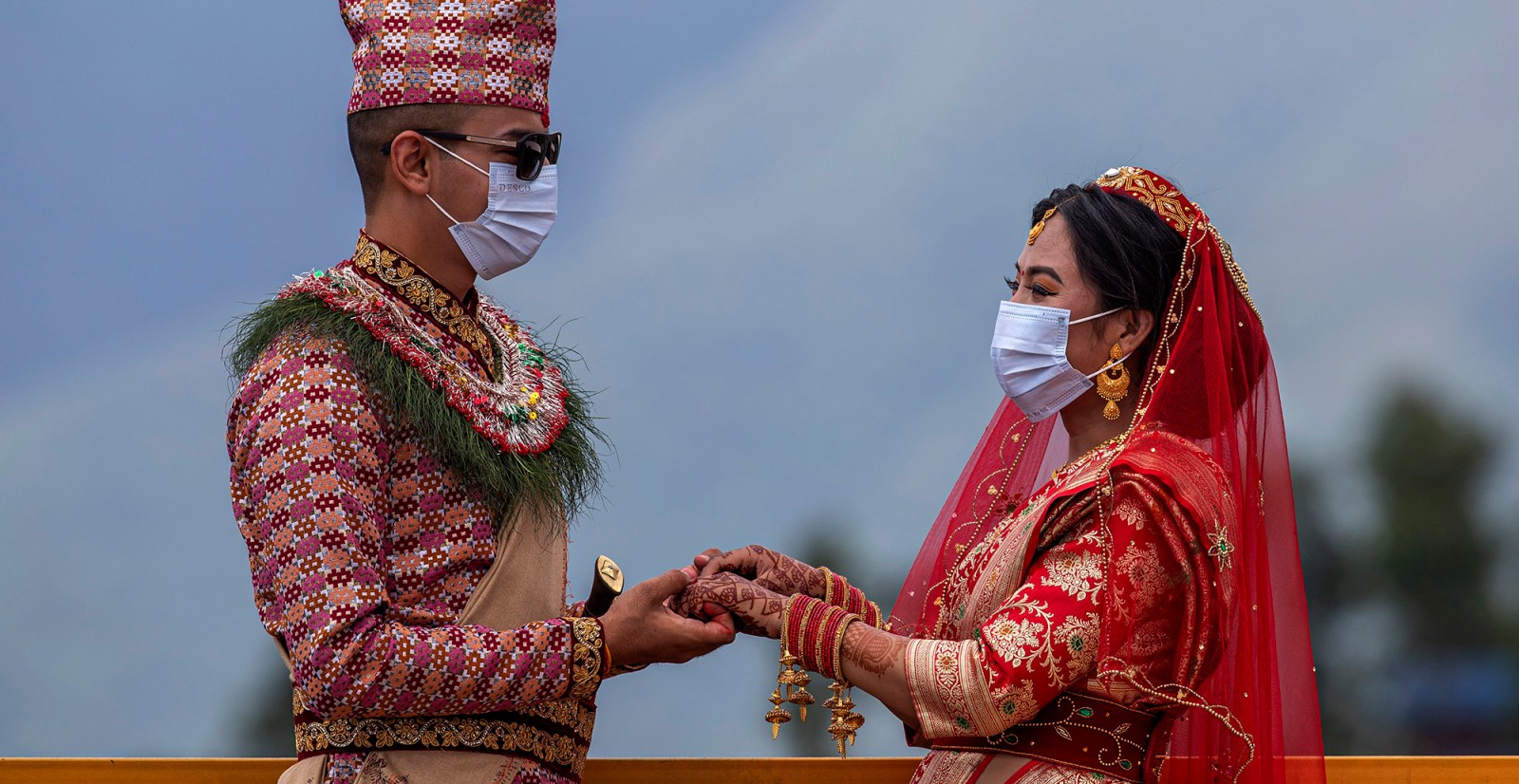 A Nepalese groom and bride wear masks at their wedding ceremony in Kathmandu, Nepal, on 21 June 2021. (Photo: EPA-EFE / Narendra Shrestha) 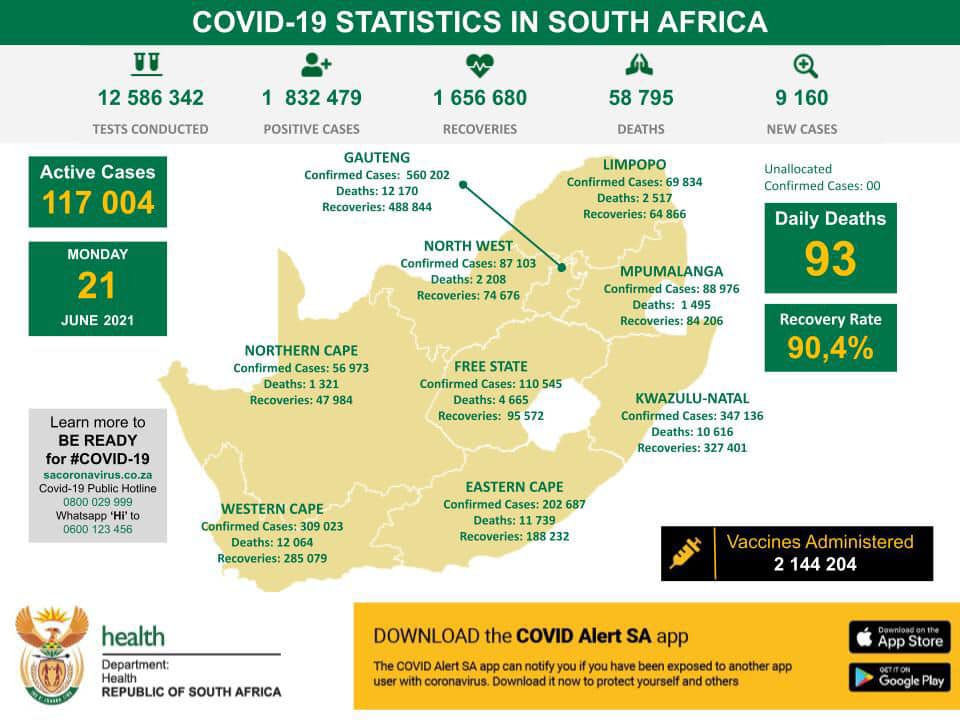 The US said 150 million Americans have been fully inoculated against Covid-19, or more than 45% of the population. But in some poorly vaccinated states, primarily in the South, cases are accelerating.

Cases surged in Indonesia, and China said it needs to fully vaccinate 80%-85% of the population, or just over one billion people, to reach herd immunity. The Tokyo Olympics will limit the number of spectators to 10,000 people per venue.

Covid rebounds in US South

Covid-19 transmission is accelerating in several poorly vaccinated states, primarily in the South, and more young people are turning up at hospitals. The data present the clearest sign of a rebound in the US in months.

In Missouri, Arkansas and Utah, the seven-day average of hospital admissions with confirmed Covid-19 has increased more than 30% in the past two weeks, according to the US Department of Health & Human Services. In Mississippi, the hospitalisation rate is up 5% in the period.

The manufacturing will be conducted by the state-owned Biovac Institute, Tedros Adhanom Ghebreyesus, the director-general of the World Health Organization, told reporters on Monday. That will be part of a broader vaccine technology transfer hub in the country, he said.

The WHO is speaking to a number of drugmakers about establishing the hub, though the talks are so far mainly with “smaller companies”, said Soumya Swaminathan, WHO’s chief scientist. “We are having discussions with the larger companies with proven mRNA technology,” she added.

The US said 150 million Americans have been fully vaccinated, according to a statement on Twitter by Cyrus Shahpar, White House Covid data director.

The Canadian government announced a loosening of Covid-19 travel restrictions for fully vaccinated people amid warnings that a return to a completely open border will take a while longer.

Fully vaccinated Canadians and residents will be exempt from the mandatory three-day hotel stay as well as a 14-day quarantine requirement on arrival to the country, Justin Trudeau’s government said in a statement on Monday. Travellers will still need to have tested negative for Covid-19 before their trip, and take a second test at the border.

The move — effective 5 July — is a first, incremental step to ease restrictions amid mounting impatience for the government to reopen the border between the US and Canada. A fuller reopening won’t happen until 75% of Canadians are fully vaccinated, Canada’s border chief said on Sunday. The world’s longest undefended border has been closed to most travel since March 2020. On Friday, the government extended the restrictions until at least 21 July.

German Health Minister Jens Spahn warned of the possibility of a fourth wave of the pandemic as the Delta variant spreads, saying it’s important to remain cautious as the country plans for a potentially challenging autumn and winter.

“As you can see in the UK, there is a risk,” Spahn said in an online panel hosted by industry group BDI. “Just remember the figures they had just some weeks ago regarding vaccination as well as the infection rate, and actually how quickly that can change.”

Kenya will receive 358,000 AstraZeneca doses donated by Denmark on Monday to shore up depleting stocks for the second round of vaccinations, according to Willis Akhwale, chairman of the Covid-19 vaccine advisory task force.

A total of 1.18 million vaccines have so far been administered across Kenya, but fewer than 200,000 people had received a second dose as at 20 June, according to the Health Ministry.

Johnson says curbs to be lifted as planned

UK Prime Minister Boris Johnson said England is on course to be able to lift coronavirus restrictions as planned on 19 July, despite the spread of the Delta variant.

But Johnson also warned that foreign travel is likely to continue to be disrupted this year, with delays and complications for travellers.

The South African Health Products Regulatory Authority said an application by Sinovac Biotech to have its CoronaVac vaccine approved “is at a very advanced stage”.

So far South Africa has only approved the Pfizer and Johnson & Johnson vaccines for use. Russia’s Sputnik V vaccine is also being evaluated.

Britain’s surging coronavirus infection rate is widening a rift between airlines and health authorities over the government’s decision to maintain some of the tightest rules on travel in Europe.

Travel industry officials plan to hold events on Wednesday in London, Edinburgh and Belfast to draw attention to some 195,000 jobs they say are at risk from restrictions on overseas trips. Meanwhile, an adviser from Public Health England warned that a fourth national lockdown may be needed this year to control the virus.

Indonesia’s total Covid-19 cases reached two million and hospitals have started to fill up as the country grapples with the highly transmissible Delta variant.

The government confirmed 14,536 new cases on Monday, a record. Deaths have begun to pick up as the Covid-19 hospitalisation rates exceed 70% in 87 cities across the country, with 294 fatalities recorded in the past 24 hours.

China needs to fully vaccinate 80%-85% of the population, or just over one billion people, to reach herd immunity, the nation’s Centers for Disease Control and Prevention told state media on Monday.

The world’s most populous country has already administered one billion doses, but most were Sinovac and Sinopharm that require two jabs. China’s “covid-zero” containment strategy means it’s still being cautious about opening its borders and loosening quarantine restrictions. DM