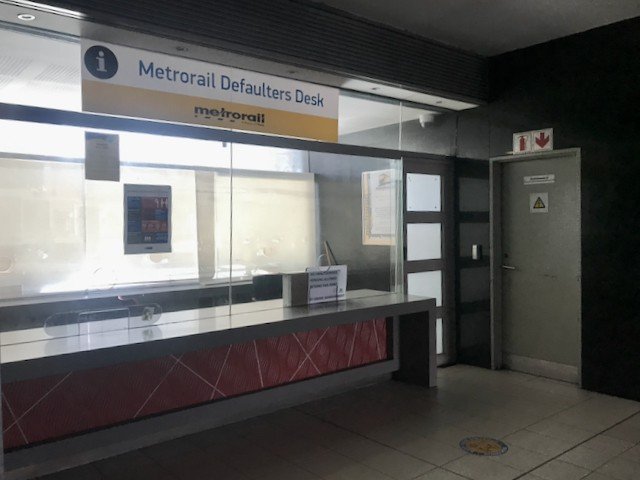 Another year at best before Cape Town Central line resumes service to Khayelitsha.

It is depressing these days to take the train from Rondebosch to Cape Town. On Thursday last week, there was one other person on the platform.

We bought tickets at noon. The train departed over two hours later.

At Cape Town station the platforms were deserted except for cleaners and some security guards. Billboard advertisements have vanished from the walls. The platform displays show only the time of day instead of information on where the next train is leaving from.

Staff at the information desk could tell us when the next train to Fish Hoek was leaving but didn’t know from which platform. No one was bothering to staff the defaulters’ desk for people to pay ticket fines.

We found a few commuters hanging around Cape Town station. They complained that since Metrorail has stopped selling weekly or monthly tickets, buying daily tickets is costly. They also complained about the constant changing of platforms.

While we were there, the train to Fish Hoek changed from platform 5 to 6 and then back again to 5.

Our carriage on the 3pm train to Rondebosch had only about 15 people; three more boarded at Salt River.

“I used to pay R50 a week but now it has almost doubled, and the trains are never on time. When you get to the station, they tell you there are no trains or the train is delayed,” said a health worker at a Brooklyn facility.

He said he has commuted by train for 20 years and the trains used to be full of people. He has now given up waiting for a train at Maitland as they are so few and far between.

“People are frustrated and take their anger out on trains. It is also dangerous to be on the train now. They [even] rob people during the day,” he said.

Metrorail spokesperson in the Western Cape Riana Scott continues to try to give helpful answers to our questions despite the collapse all around her. She explained that weekly and monthly tickets have been stopped in all Metrorail regions and will only be restarted once an order to do so is made.

Scott said that Metrorail timetables are posted on https://capetowntrains.sitelio.me/timetables “with any deviations communicated via social media and station announcements”.

But this website is built on a free platform, with a Mexican domain. The links to the timetables and route maps take you to Google Drive links, and these have not been updated since September 2020. There is no indication that this is an official website. The official Twitter account tells commuters that they should go to https://capetowntrains.freeblog.site (hardly an official site) for timetables. This is what you see at this site:

Scott said that currently, 151 trains operate daily in the Cape Town region (one train is denoted by a train number on a timetable). Before the hard lockdown the region operated 273 trains per day.

The Central Line, which serves the largest portion of Cape Town’s population, was not operating at this point, having closed in 2019.

Scott said that since the lockdown last year with people now working remotely, revised shifts, alternate days for scholars, a reduced workforce, and compliance with Covid-19 restrictions, had all contributed to lower passenger levels on all modes of public transport. But we have been taking busses and taxis the past week and they are incomparably busier than the trains. DM