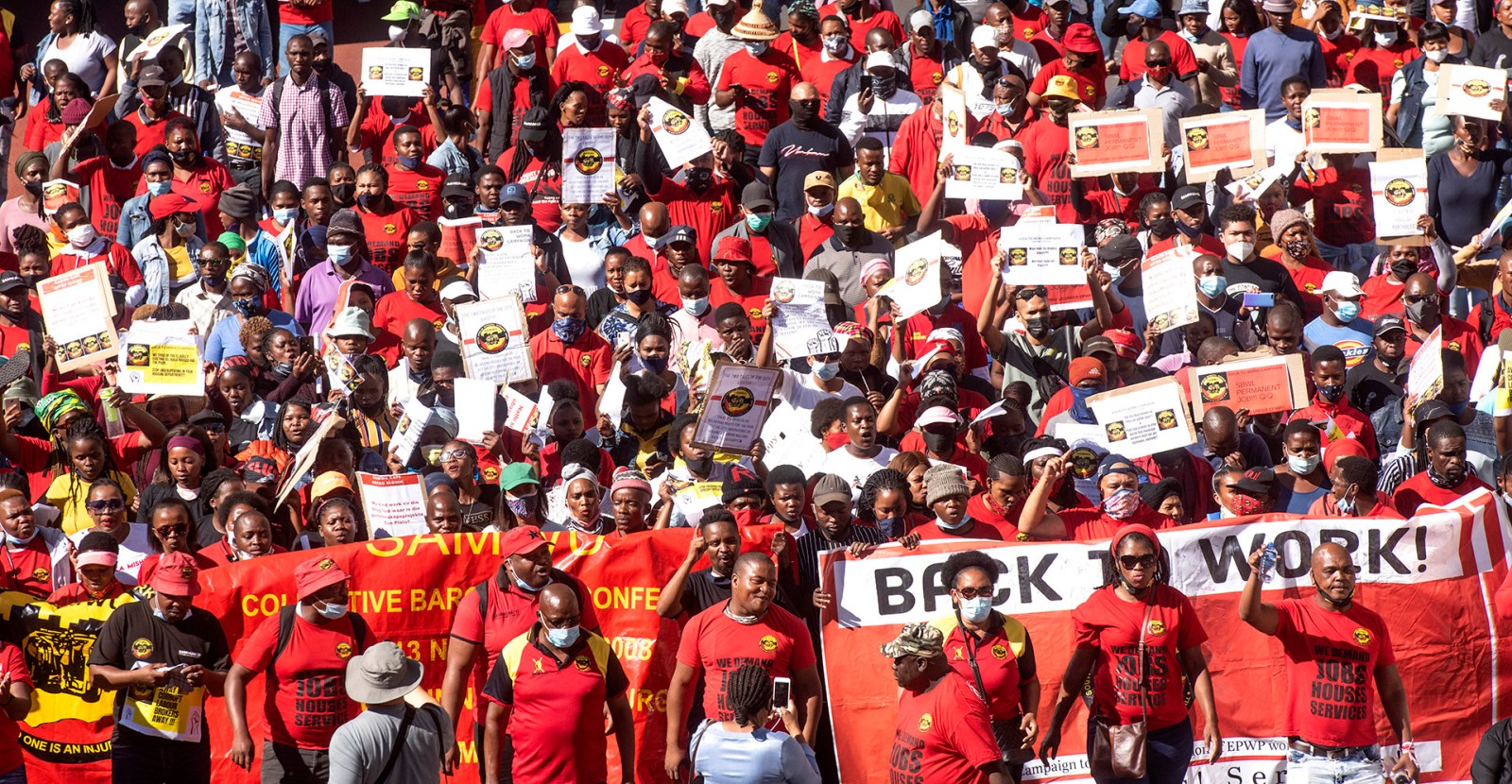 Protesters march to Cape Town Civic Centre during the Back To Work Campaign on International Workers Day on 1 May 2021 in Cape Town. (Photo: Gallo Images / Brenton Geach)

There can be little argument that the world of work in South Africa, and indeed globally, is in the throes of a deep, systemic crisis, made all the worse by the ongoing Covid-19 pandemic. However, if we allow ourselves, we can see the current and coming period as heralding a different kind of transition, one of possibility.

Dale T McKinley is a long-time political activist, researcher-writer and lecturer who works at the International Labour Research and Information Group.

At one level, there are record levels of socioeconomic inequality between those who own the means of production and those who produce, which is threatening to pauperise the majority of workers and which has only been further catalysed by the pandemic. At another level, workers and worker organisations are increasingly divided, ideologically, socially, economically and organisationally, with the general state of the trade union movement being one of generalised disorientation and weakness.

One of the most crucial “products” of this crisis is strategic confusion. Past ideological certainties are no longer able to provide the framing glue for holding together a clear strategic vision and set of goals. The institutional and organisational moorings that previously allowed for the strategic building of more inclusive, militant and effective worker organisation and more specifically unions, have largely crumbled or been captured by corporatists, corrupt bureaucrats, abstentionists and sectarian/factional politics.

As a result, the core principles and values that, in past times, underpinned the very strategic DNA of worker organisation and struggles have receded in the face of unprecedented waves of material desperation, opportunism and reaction. It is not a pretty picture and even more so in a country like South Africa with its deeply embedded history of racial and class conflict and status as the most unequal nation in the world.

Combined with the present harsh reality, which sees the organised working class as well as progressive/left forces in general fighting (mostly) rear-guard and defensive, pandemic-fuelled battles, all of this raises a range of crucial questions and issues. One of those questions is whether or not the union form has outlived its usefulness for workers, as a historically central component of working-class organisation and struggle.

A crisis of worker participation and representation

In this respect, there are three unfortunately enduring features of South Africa’s post-1994 union picture:

Further proof of why unions have become increasingly ring-fenced from the majority of workers, comes from a 2018 Cosatu survey which found that many union officials considered the financial and human resource “costs” of organising and recruiting casual workers too high for the consequent “return” in union subscriptions.

Indeed, because the membership of most existing unions is overwhelmingly taken up by male permanent workers who are themselves insecure about their jobs and social status, the general attitude and approach to casual workers (and more especially women workers who make up a majority of casual workers) is either one of indifference or hostility and control.

A crisis of consciousness

It is instructive that for the most part, workers’ social, political, economic and moral consciousness has been missing from the strategic radar of unions for the better part of the post-apartheid period. Much like the party, state and social movement terrains, the personal has been largely removed as a core sociopolitical and organisational attribute, a central component in shaping and guiding both individual and collective practice.

The harsh reality is that, with some exceptions, basic ethics/values of honesty, respect, humility, accountability, empathy, responsibility, solidarity and generosity that informed the huge personal sacrifices for and collective moral power of past worker and liberation movement struggle have been largely cast aside. Tragically, such ethical “load shedding” has not receded in the face of the current pandemic despite the desperate need for the opposite.

In their place we have witnessed many union leaders/officials being preoccupied with: high-end lifestyles alongside personal enrichment and accumulation (with investment companies at the heart of this); prioritising factional power-mongering; and engaging in destructive, socially reactionary behaviour. There are many examples over the years, especially when it comes to issues of money and violence against women involving the various leadership levels of established trades unions and their federations. As the International Labour Research and Information Group’s Mandy Moussouris asked soon after the formation of Saftu: “What exactly is the new federation going to do to ensure that women do not continue to be used as political tools in a battle of men over power?”

A crisis of organisational form

Historically in South Africa, the union form has been dominant, not only because of the central role unions played in the anti-apartheid struggle but because the post-1994 labour market terrain has been institutionally, legally and procedurally constructed to privilege unions as the principal form of worker representation and voice. Indeed, that terrain has effectively demanded the formalisation of worker organisation into the union form as the prerequisite for recognition by employers and participation in the institutional and legal-procedural frame.

Besides the not so insignificant financial and human resources as well as legal-institutional expertise needed to set up and sustain a union, the union form has been mostly characterised by exclusivity and hierarchy, which have gone hand in hand with formalisation. Exclusive in the sense that unions represent a shrinking minority of workers and hierarchical because all unions have embraced formal leadership positions differentiated by title and salary, centralised bodies of executive authority at the core of regular decision-making and the general dominance of men at all levels of the organisation.

While the form of worker organisation does not completely determine its core character, the two are in many ways interlinked. The form can go a long way in determining how effective the organisation is in: practically advancing the workplace struggles of its members; linking up/creating solidarity with other workers and communities on a more mass, campaigning character; and in responding to the overall needs of members and reflecting its stated values/principles as well as aims and objectives.

With some exceptions, unions in South Africa and globally have largely proven to be ill-fitted to the overall and rapidly changing structure of the working class, conditions of work and the needs of both union members and other workers.

Whatever the cumulative crises of unions, they are not about to just disappear or be wholly replaced by more democratic, worker-controlled forms of organisation. Nevertheless, the fact is that over the past 20 years, the key foundation of gains for workers (both unionised and otherwise), has come from creative, mass, collective action outside of the formal/legislative labour institutional framework, of Nedlac, of tripartite corporatist negotiations and of bargaining councils. In other words, from collectively conceptualised and independently practised class struggle, regardless of the dominant worker organisational form.

This includes non-union worker collectives such as the African Reclaimers Organisation, which is considering adopting a model of “community membership”, wherein middle-class supporters etc can join as “activists” and lend their expertise and practical support. In this way, the organisational form is built to cover the multiple and changing needs of members; for example, kitchens supplying food to workers and their families, rehabilitation centres and the occupation and self-management of empty spaces for production.

In this respect, workers in South Africa would be well served to look, for example, at the Argentine Uníon de Trabajadores de la Economía Popular (UTEP – Union of Workers of the Popular Economy). Formed in 2011 as a confederation and bringing together self-employed and casualised workers in various recycling, textile and housing cooperatives together with worker-recovered enterprises, UTEP has more recently formed itself into a new type of “extended trade union” that is able to adapt its forms of organising to the holistic needs of all members, dependants and supporters, coterminous with a solidaristic and movement-building focus and intent.

Regardless of what these days often seems like a horizon of terminal decline and disappointment when it comes to worker organisation, if we allow ourselves we can see the current and coming period as heralding a different kind of transition; one of possibility. If, as is clearly the case, the present union form as well as the labour movement as a whole needs to be reimagined and rebuilt, then it is within and alongside the world of casualised work (which houses the majority of workers in multiple communities), where it can and needs to be done.

Here, there is the possibility of a future in which much of the old ideological, organisational and discursive baggage can be offloaded, in which new spaces for critical thinking and debate can be created, in which progressive and personal as well as collective social and moral values/principles can be committed to, and in which the basics of inclusive and grounded worker organisational forms and struggles can take centre stage. DM