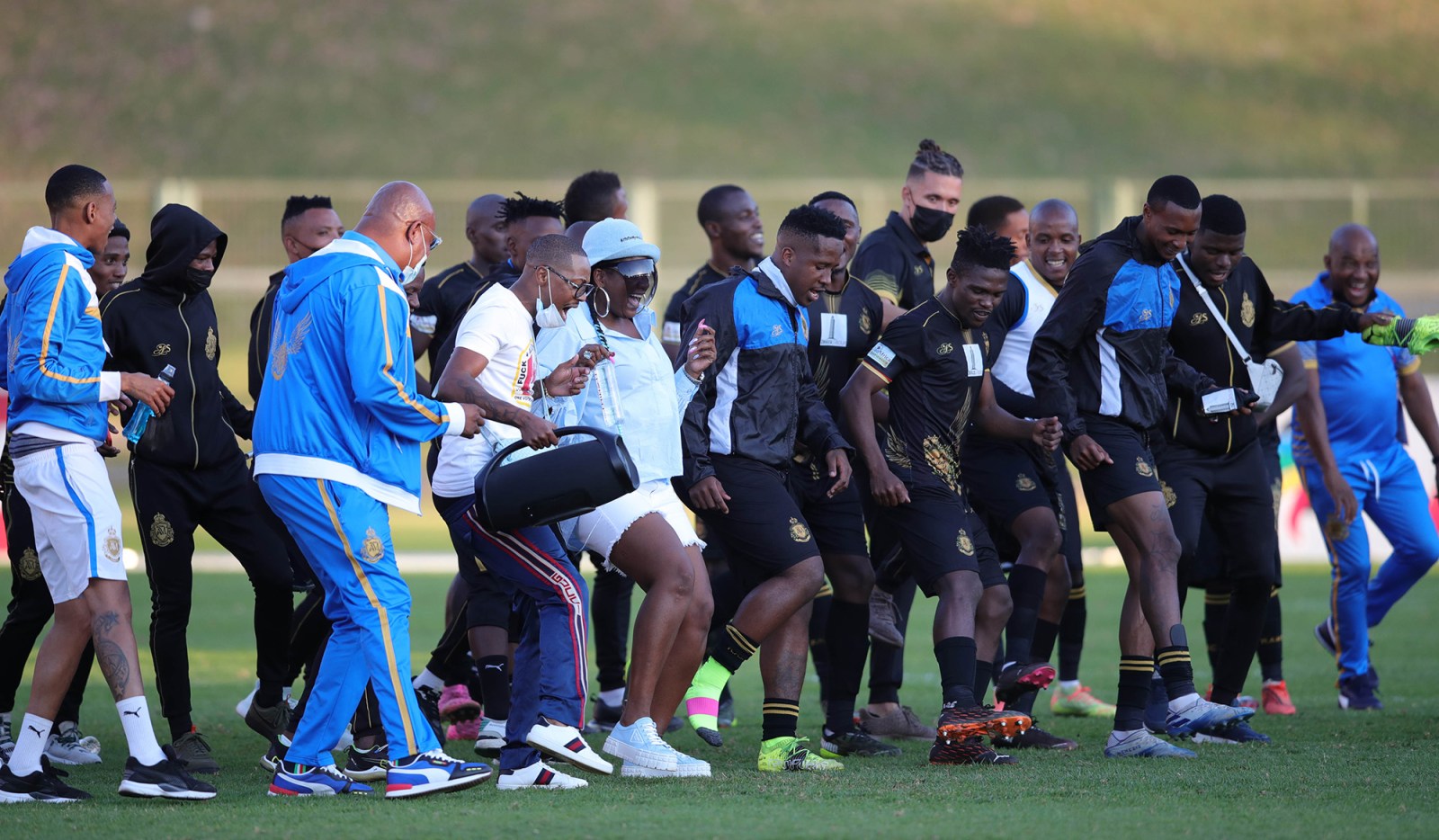 Andile Mpisane, chairperson of Royal AM, and club owner Shauwn Mkhize celebrate victory with players after the GladAfrica Championship 2020/21 match against the University of Pretoria at Tuks Stadium in Pretoria on 16 May 2021. (Photo: Samuel Shivambu / BackpagePix)

Yet another Premier Soccer League season has ended under a cloud of uncertainty.

In the boardroom equivalent of a goalmouth scramble, the identity of the team automatically promoted from the GladAfrica Championship to the DStv Premiership for the 2021/22 season is turning into a scrappy affair.

As it stands, Sekhukhune United are automatically promoted to the DStv Premiership, having finished two points clear of Royal AM. But Sekhukhune only reached 53 log points because of a technicality after being awarded three log points after Polokwane City fielded ineligible players against them in a league fixture in January.

Polokwane failed to include five players under the age of 23 on their team sheet, as per the league’s rules. Polokwane cited some of the players testing for Covid-19 as the reason for this.

Sekhukhune had flagged the misdemeanour prior to kickoff. However, the PSL ordered that the fixture proceed, with Sekhukhune playing the match under protest. Polokwane won 1-0.

Because Sekhukhune had flagged Polokwane’s breach of the rules, it went to an internal PSL disciplinary hearing. In May the outcome of the disciplinary committee (DC) finally ruled that Polokwane had breached the rules and stripped them of the three log points for winning. But it did not award the three points to Sekhukhune.

This outcome left Sekhukhune unhappy. They wanted the points handed to them because they had played the match under protest and the Sekhukhune hierarchy challenged the DC’s ruling.

Sekhukhune’s argument centred on the fact that it was not their own doing that Polokwane had failed to include the five under-23 players. Epstein ruled in favour of Sekhukhune and handed the side three points a few days prior to the season ending.

The ruling should have placed Sekhukhune at the summit of the Championship log, level on 50 points with Royal AM going into the final weekend of fixtures. But the PSL did not update the log on its website heading to the final weekend. When the matches kicked off, the official log table showed Sekhukhune on 47 points, and Royal on 50.

Sekhukhune secured three points and Royal drew their final game, and the league announced it would not declare a winner. Despite there being no trophy handover, both Royal AM and Sekhukhune celebrated being crowned champions.

Polokwane City then appealed the decision at the South Gauteng High Court, arguing the three points shouldn’t be awarded to Sekhukhune.

“Polokwane have taken … steps to challenge the award [of three points to Sekhukhune]. The effect of not setting [the arbitrator’s decision] aside is that it sets a bad precedent for future dispute and Sekhukhune would unfairly benefit on the ranking of the championship,’’ read the court papers.

The matter was heard by Judge Roland Sutherland on 11 June, weeks after the season finished.

He ruled in favour of Sekhukhune, dismissing Polokwane’s application. The PSL finally conceded and updated the log to include the three points.

“Sekhukhune United Football Club have secured automatic promotion to the DStv Premiership for next season, while Chippa United, Royal AM and Richards Bay football clubs will contest the promotion/relegation playoffs,” said the league.

Royal AM are seeking leave to appeal Sutherland’s ruling, which has left the PSL playoffs in limbo.

Royal, owned by businessperson Shauwn Mkhize, have refused to accept Sutherland’s ruling. Following the judgment, they filed papers calling for an urgent interdict of the relegation/promotion playoffs, which were initially supposed to commence on 15 June. This as they prepare an appeal of Sutherland’s ruling at the Supreme Court.

“That the alleged transgression by Polokwane City FC was entirely caused by the situational emergency and unforeseeable emergency that three (3) players had unexpectedly contracted Covid-19,” read the papers filed by Royal.

“While the unforeseen contraction of Covid-19 was not a justification of the transgression it was a major mitigating factor which must have played a major role in the disciplinary committee imposing the lesser sanction lawfully available to it of deducting points from the offending club.

“Royal won the Championship on the field of play which is in keeping with the universal culture of football and the best interest of football stakeholders including players and supporters.”

Acting Judge Nyathi granted the interdict. The PSL then made clear its intention to have the interdict lifted.

“A legal dispute has arisen between Royal AM and the league as to whether the order granted by Nyathi AJ has been suspended as a result of the filing by the league of an application for leave to appeal Nyathi AJ’s order,” the league said.

“The league contends that the order has been suspended, while Royal AM contends that it has not. In the circumstances, the league has elected to postpone the start of the playoffs and seek the urgent intervention of the high court.

“The risks to the completion of the season are obvious but in view of the dispute the league has elected to act with … caution even in extremely trying circumstances for all member clubs, their players and those affected in this matter.”

A timeline of events

2 January: In a GladAfrica Championship fixture versus Sekhukhune United, Polokwane fails to include five under-23 players in their match-day squad, as is required by PSL rules. They only have two, citing positive results for Covid-19 within the team as the reason. The game goes on under protest, and Polokwane win 1-0.

12 May: The PSL DC finds Polokwane City guilty of failing to field the required number of under-23 players and deducts the three points they had secured with their 1-0 win against Sekhukhune. These points are not awarded to Sekhukhune, as had been done in similar previous cases.

19 May: Following Sekhukhune United’s flagging of the PSL disciplinary warning as being unfair the case is reheard by Hilton Epstein SC. He rules in favour of Sekhukhune. Epstein ordered that the PSL award Sekhukhune the three points. The PSL does not update the log with the points for Sekhukhune heading into the final fixtures of the weekend.

21 May: The PSL released a statement criticising Epstein’s ruling, saying in its view it’s not correct and that “the … ruling has created uncertainty in relation to the discretion afforded to the PSL disciplinary committee to determine an appropriate sanction for acts of misconduct in each case”.

23 May: The last fixtures of the GladAfrica campaign are played simultaneously. Royal AM drew their final league game versus Cape Town City, leaving them on 51 points. Sekhukhune United beat JDR Stars 3-1, moving them to 53 points. However, the log is yet to be updated to include the three points granted to Sekhukhune in Epstein’s ruling.

On the same day the PSL announces that a trophy handover for the champions will not take place pending a finite resolution to the dispute.

24 May: Polokwane City file an application in the Johannesburg High Court asking for a review and setting aside of a Safa arbitration decision that awarded Sekhukhune United three points.

28 May: Sekhukhune United file an urgent application at the South Gauteng High Court asking that the arbitration award in Epstein’s ruling be deemed final and binding.

12 June: Judge Roland Sutherland dismisses Polokwane City’s application to have the Epstein ruling that deducted three points from them and awarded three to Sekhukhune United in the GladAfrica Championship overturned.

The PSL updates the GladAfrica Championship log to show Sekhukhune United as being at the top of the table, and therefore as the team that will automatically be promoted to the DStv Premiership.

13 June: Royal AM announce their intention to appeal the ruling by Sutherland.

14 June: Royal are successful in their bid to have the playoffs interdicted pending the outcome of their appeal, a day before they are set to commence.

15 June: The PSL announces it will appeal the interdict on the playoffs that was granted by Nyathi.

17 June: The PSL postpones the playoffs pending a resolution to the ongoing matter. DM168