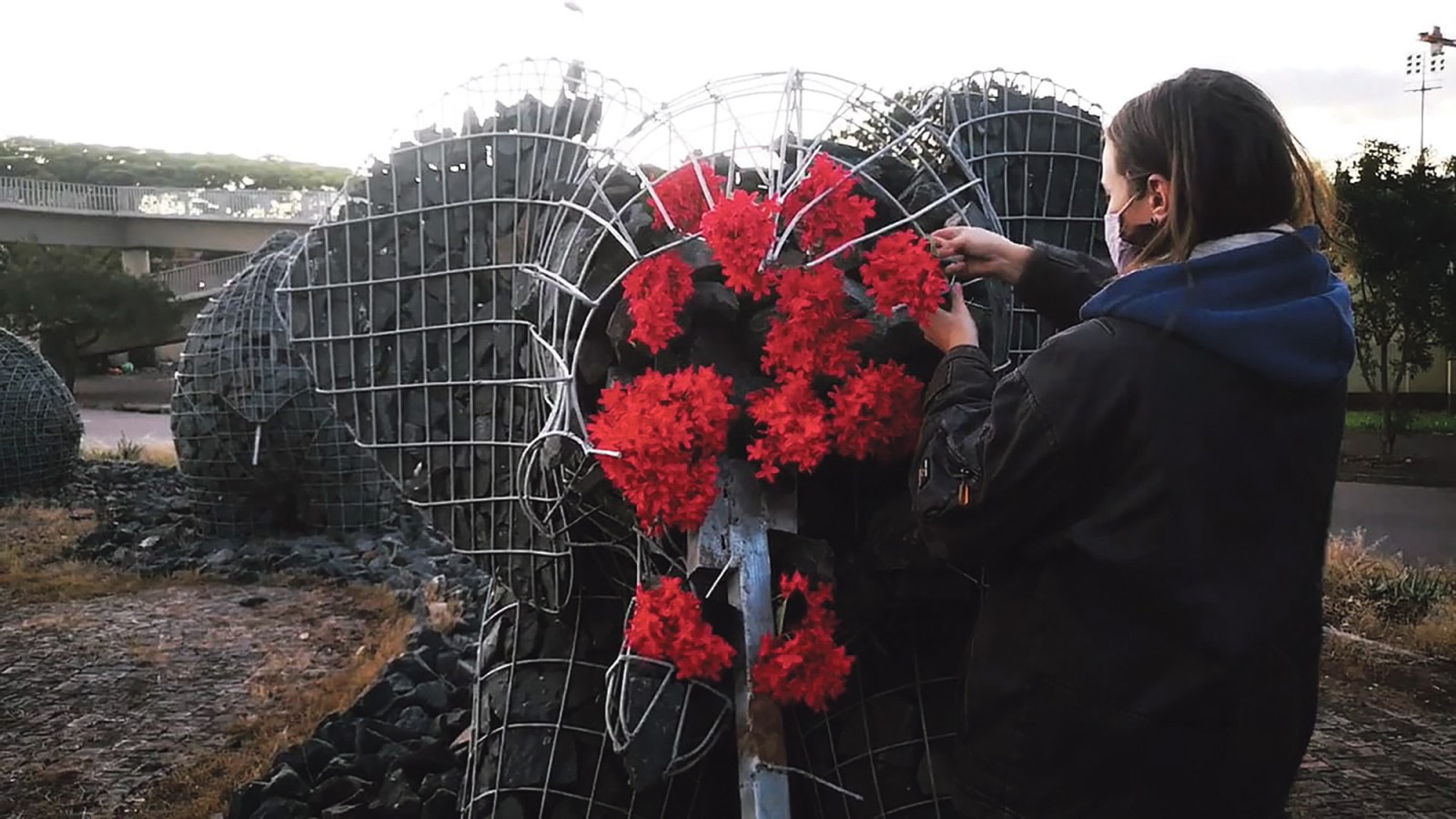 Durban sculptor and poet Jess Bothma protests against the ‘poaching’ vandalism of the wire and rock Warwick Junction elephant sculptures by placing bright red flowers on the sculpture to symbolise the ‘ripping out of its flesh’. (Photo: Bhekazi Ernest Ngcobo)

World-renowned South African artist Andries Botha had just gone through a strenuous work period when he was told of the vandalism of Durban’s Warwick Triangle elephant sculptures, news that left him “shocked and bereft” as he surveyed the damage.

Botha had months earlier noticed the subtle erosion of the artwork but was not prepared for what awaited him when he visited the site at the entrance to the city’s bustling transport node, where the elephants watch the 460,000 commuters who pass through the junction daily.

But this time the entire trunk and face of one of the four elephants had been ripped off, and the tail and other parts vandalised.

“I was shocked; bereft, actually. I had been spending the last two months on work and was emotionally depleted. I thought am I now once again going to have to pick this thing up, in perpetuity? And the breaking point comes where the elephants are no longer mine,” Botha said.

“I had to do what I did at the time, either by wisdom or stupidity, to protect and defend the principle of the elephants and I was done,” Botha said.

Botha, an avid environmentalist and chairman of the Human Elephant Foundation, was referring to the political controversy his elephant sculptures had inadvertently got embroiled in when the city first commissioned him. Initially meant to include a herd of seven elephants, the project was reduced to four after political interference.

Erstwhile KwaZulu-Natal ANC chairman John Mchunu decided at the time that the elephants were a symbol of the Inkatha Freedom Party and Botha was ordered to stop work on the installation. A Durban High Court battle ensued, which resulted in a settlement for Botha to complete the elephants. He also obtained a court order compelling the city to protect the sculptures. The artwork was completed in 2014.

For Botha the elephants are not political, but rather a symbol of humanity’s interaction with the planet and a vital part of the heritage of Durban, once populated with elephants that wandered down Florida Road to Greyville, where the water was apparently far sweeter than the Umgeni River, and back through Warwick Junction up on to Ridge Road. The position of the sculptures marks the place where the last free-roaming elephant was killed at the turn of the 20th century, making the installation a symbol of the “rise” of the species in a postcolonial city.

Botha’s initial apprehension about repairing the elephants came out of concern that the vandalism might reoccur and that it was costly for ratepayers.

“There should be CCTV cameras as per the Durban High Court order. Straight after the elephants were finished I went there and saw they were being monitored on the cameras,” Botha said.

But there have long been allegations that the city’s vast network of CCTV cameras has been dysfunctional for years.

eThekwini Municipality spokesperson Msawakhe Mayisela said the city was obliged in terms of the court order “to care for the artworks, as they are a cultural and heritage investment of the city”.

Mayisela said the city had opened a criminal case of vandalism with the police and had requested CCTV footage from the weekend of 21 May, when the worst vandalism is believed to have occurred.

“The footage will be handed over to the police who are leading the investigation,” Mayisela said.

He said the city had lodged an insurance claim of R200,000 for the repairs.

“The work will need to be removed from the current site to the artist’s workshop and will require the replacement of the armature and galvanised wire that forms the structure of the elephant,” Mayisela said.

He said the city was negotiating with Botha, who this week told DM168 that he had agreed to repair the elephants, to have the artwork relocated to the beach promenade adjacent to the underpass from Moses Mabhida Stadium, as part of the first public artworks on the revamped promenade.

“This will also bring the possibilities of the city to honour the contract it has with the artist of installing a herd of seven elephants. The promenade, like the Warwick site, has a direct link to the history of the elephants that roamed Durban in the early years,” Mayisela said.

“The beach promenade, besides providing constant 24-hour surveillance, will also promote the elephants to a larger audience and allow for better engagement with the artwork because most people on the promenade are on foot or cycling in the area, whereas [in] the current site the work becomes obscured by traffic and advertisement boards and [there are] risks of accidents.” DM168

Lyse Comins is a freelance journalist and content creator based in Durban.