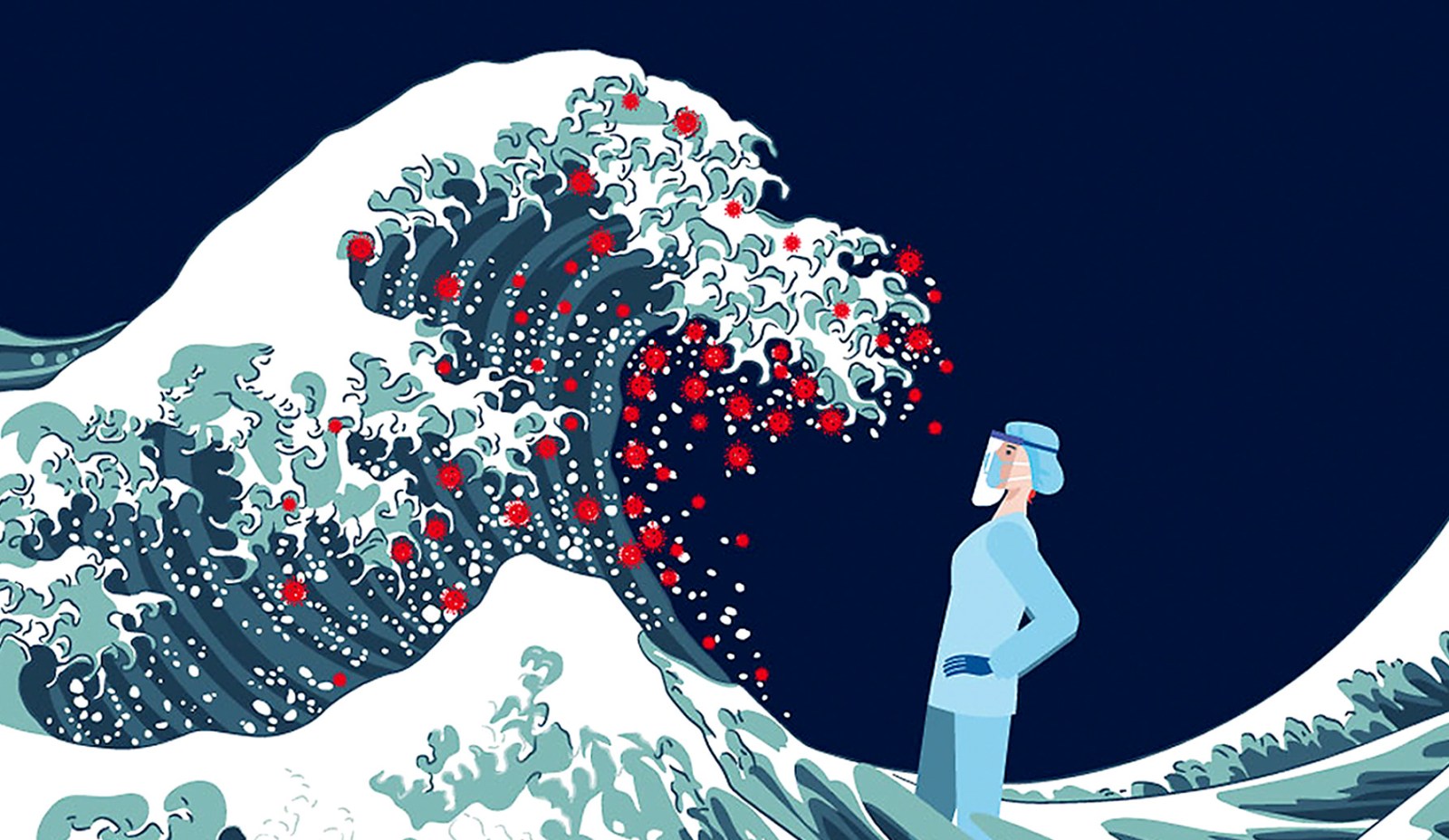 The limping vaccination drive has made no impact as deaths rise. Doctors report patients taking oxygen on chairs in casualty wards as they wait for beds.

The smallest province is taking the biggest Covid punch. The third wave is now officially higher than the second wave, and it has weeks to go before it reaches its peak.

“Gauteng is the epicentre,” said Dr Ridhwaan Suliman, a senior researcher at the Council for Scientific and Industrial Research, on June 20 as Gauteng recorded 8,400 cases at the weekend, its highest number of increases per day since epidemiologists first detected infections in SA in 2020. “This is 21% higher than the previous peak in January 2021,” said Suliman. 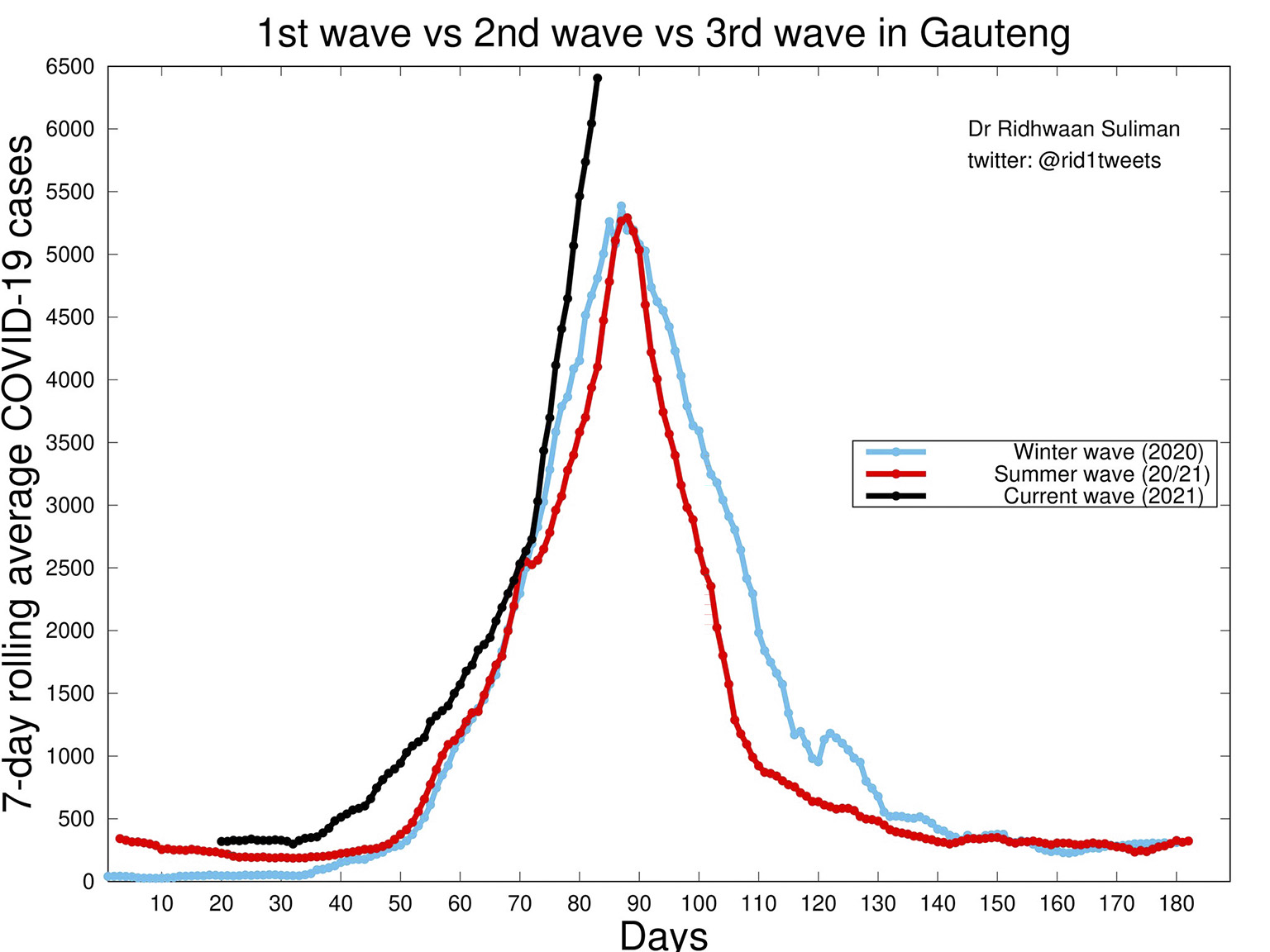 Hospitals in the province had admitted 5,700 people by the end of last week – a sign of severe illness as patients are hospitalised only when they are in a serious condition. Intensive care units (ICUs) are bulging, said Professor Francois Venter of the Ezintsha unit at Wits University. About one in four patients are so seriously ill that they need an ICU bed. “We can continue to expect a continued rise in hospitalisations,” said Suliman.

“It’s an absolute catastrophe in Gauteng,” added Venter. The number of Covid-19 deaths in Gauteng is now at an average of 60 people a day – about half the national total.

An emergency physician who works in private and state sector hospitals said the picture is the same across both: Covid-19 general and ICU wards are full.

“Numbers in the state hospitals skyrocketed in the past week,” the doctor said, adding that private hospitals had started filling up with Covid-19 patients from the beginning of May.

The doctor said emergency medics were reporting the same picture across the province. “Every person reports the same thing – a huge shortage of beds.”

Doctors have reported that patients are being kept on oxygen in the casualty wards of hospitals as they wait for beds to become available. Hospitals had put ambulances on divert, but the Gauteng government had turned off divert last week as too many hospitals were putting up “Full” signs and diverting admissions.

On Sunday the Gauteng government sought to downplay the growing crisis being reported by doctors.

“Despite the health system in Gauteng operating under increased load due to the rise in Covid-19 cases, the province is still able to cope with the pressure at this stage,” said spokesperson Kwara Kekana.

She said the army is deploying medical staff into the province and new beds at Chris Hani Baragwanath. Bronkhorstspruit and the Tshwane district hospitals will be used for the surge while hospitals are “repurposing” beds for Covid-19 patients.

Doctors on the ground have said many of the new facilities are not yet up and running. City Press reported that the new Anglo-Gold Ashanti hospital, a state-of-the-art facility, is lying dormant because of a staff shortage.

The doctor who spoke to the Daily Maverick said staff shortages are exacerbating the impact of the third wave because when nurses leave they are not being replaced because of a budget crunch. 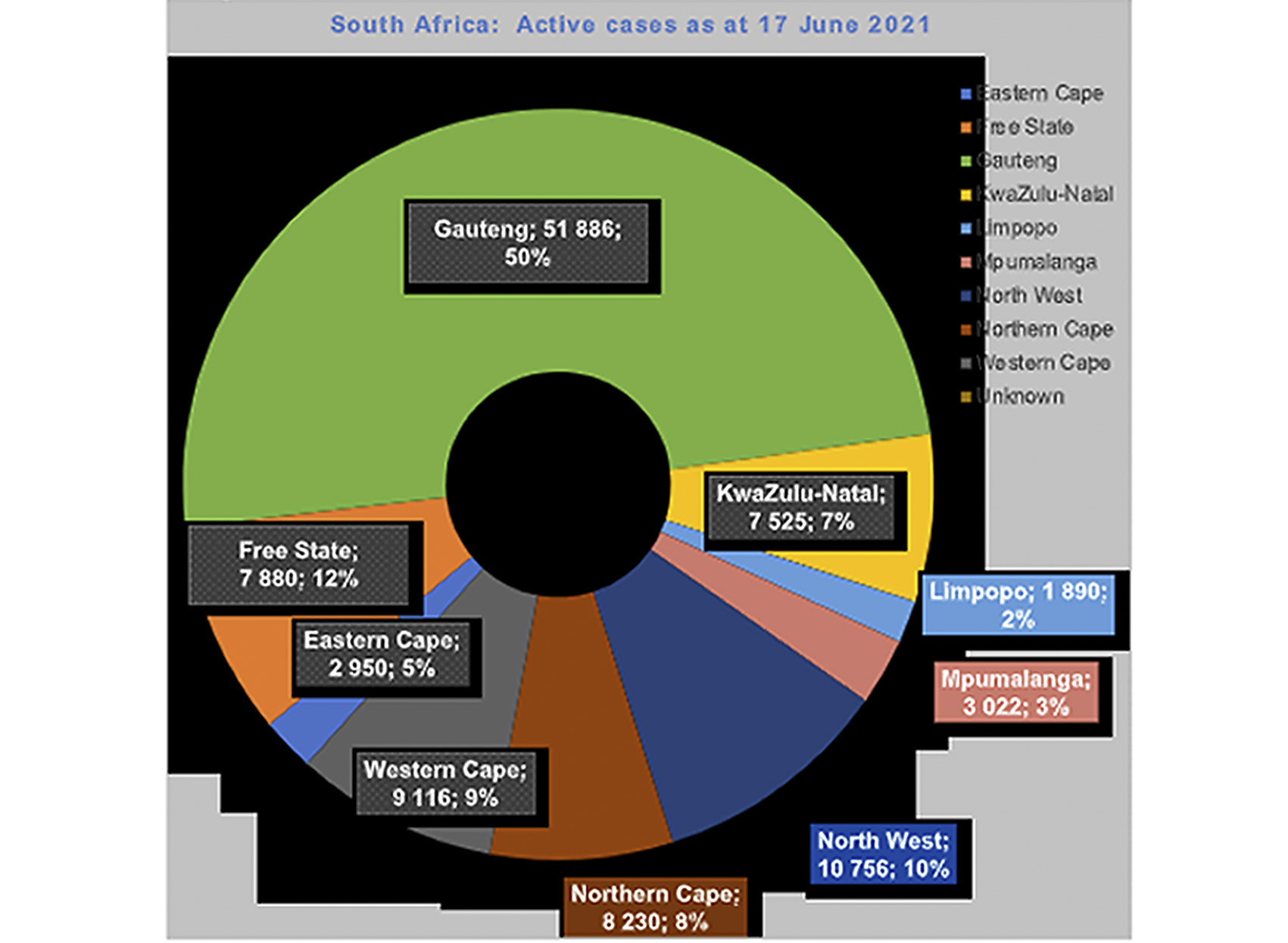 Suliman said Gauteng now accounts for more than six in 10 of cases nationally – it’s carrying a disproportionate share of the disease burden.

The province’s people are moving in numbers and gathering together to create super-spreader events. Last December, as the second wave hit the coastal provinces hard and the Beta variant was identified, behaviour in Gauteng modified quickly, said Suliman. But this time, public messages are not having the same impact, and mobility statistics from Google and the mobile phone companies show people are not staying put.

“Because Gauteng had a less severe second wave, more people are susceptible to Covid,” said Suliman. “There may be less seroprevalence.”

While the national Department of Health’s Deputy Director-General, Dr Nicholas Crisp, told News24 that Gauteng might be coming off the peak, like the Northern Cape is doing, the numbers do not bear this out. From Friday, when the Gauteng government released this chart, hospitalisations increased. Most patients are in private hospitals, but public hospitals are filling up fast. The NGO Gift of the Givers was arranging emergency oxygen concentrators for public hospitals at the weekend.

The killer third wave in Gauteng is an X-ray into what Venter has called the “glacial pace” of South Africa’s inoculation campaign.

The Gauteng government said in its weekly briefing that, “The pace of the implementation of the vaccination programme continues to be worrisome.”

If the vaccine pace is not substantially increased, there will be a fourth wave of infections by December, said Suliman.

“There will be between 20 and 40 waves before we are all vaccinated,” said Venter, adding that at the current pace it could take 10 years to complete inoculations in South Africa. DM