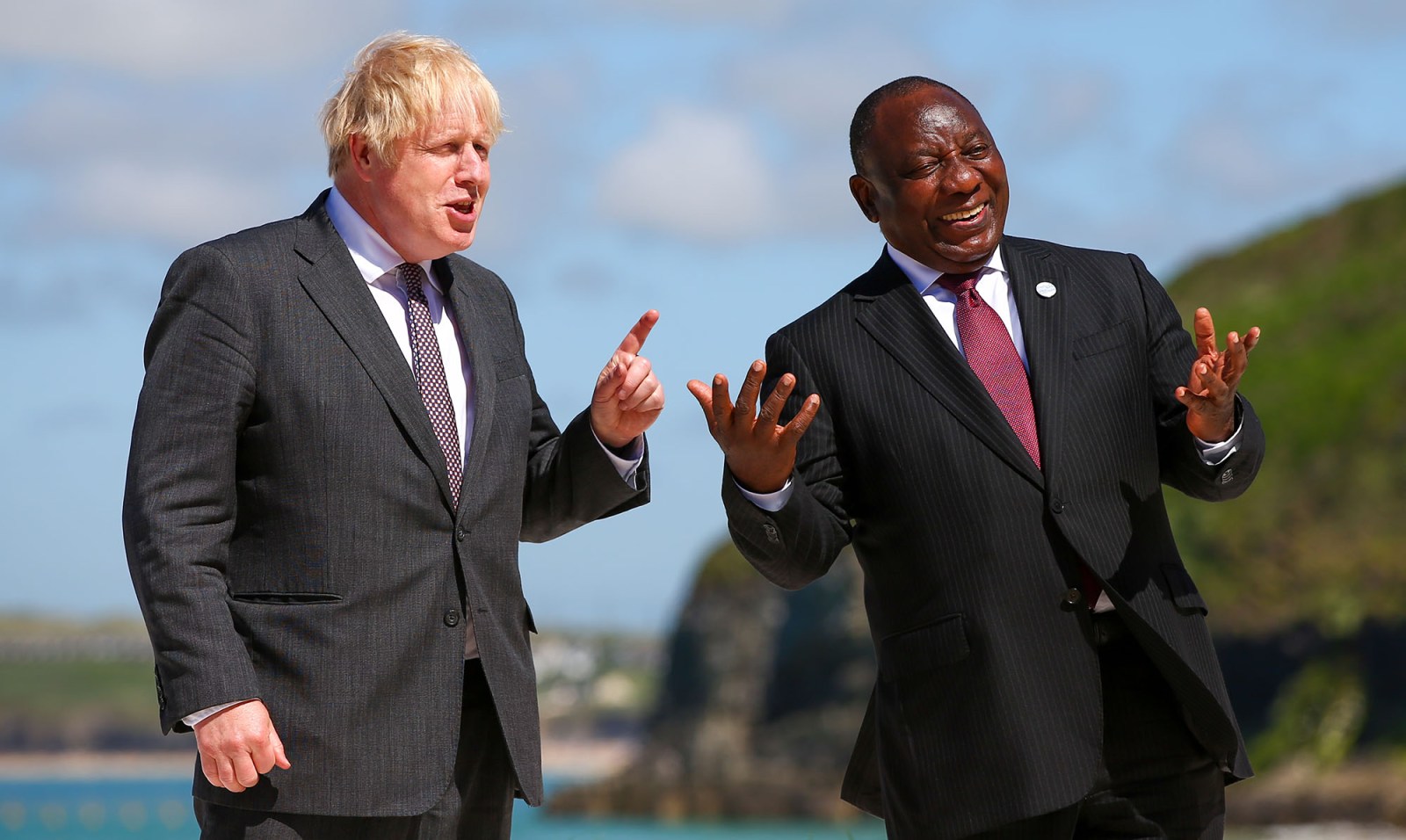 There were disagreements on a general waiver, but there’s movement towards negotiations.

President Cyril Ramaphosa left the G7 Cornwall summit last weekend pleased with the progress he has made in persuading most of the world’s richest countries to step up their support to Africa in fighting the Covid-19 pandemic.

As the only representative from Africa, Ramaphosa shouldered the burden of the entire continent in lobbying the US, Germany, Japan, the UK, France, Italy and Canada for more help.

“We were unfortunately the only country from the African continent. We would have preferred that the African Union [AU] be invited, but be that as it may, we were here,” he said at a press conference after the summit. The summit host, UK Prime Minister Boris Johnson, invited Ramaphosa mainly because of his success in mobilising global support for Africa’s fight against the Covid-19 pandemic last year when he was the AU chairperson.

Ramaphosa said that “tremendous progress” had been made at the G7 summit in convincing the leaders of these major economies to open a debate at the World Trade Organization (WTO) about introducing a broad waiver on the patents of international pharmaceutical companies to allow developing countries to produce their Covid-19 vaccines.

South Africa and India have been pushing hard for this Agreement on Trade-Related Aspects of Intellectual Property Rights (Trips) waiver at the WTO; the initial strong resistance from the G7 countries where most of the vaccines are made is softening, as Ramaphosa pointed out at the press conference.

Trips is an international legal agreement by WTO member countries to respect the patents original manufacturers hold on products, including medicines and vaccines.

US President Joe Biden was the first to back the idea of a Trips waiver and French President Emmanuel Macron joined the campaign after his visit to South Africa in May.

Ramaphosa did not manage to switch the other G7 leaders at the Cornwall summit. They came out with a communiqué that continued to back licensing agreements voluntarily offered by pharmaceutical companies to developing world companies to make their vaccines. South Africa’s Aspen has such an agreement to “fill and finish” the Johnson & Johnson Covid-19 vaccine and the Serum Institute of India has a voluntary licence to manufacture the AstraZeneca vaccine. The G7 said it would support vaccine manufacturing in low-income countries but stressed that this would happen “consistently within the Trips agreement”.

Ramaphosa nevertheless said South Africa was “rather pleased” with the outcome. “What we got here was a commitment that, yes, the negotiations should ensue at the WTO.

“We’re rather pleased with this, having amassed more than 100 countries … in support of our proposals. [We] think there has been progress … on the text that should be looked at by all countries.

“The EU [has] made some proposals. We have made proposals. So the text is now being negotiated. So, that we see as tremendous progress. Having encountered negativity and opposition right from the beginning, the position has softened, it has become much more reasonable … and when we do get to text-based negotiations, we believe we can make headway.”

The EU stressed that “voluntary licences are the most effective instrument to facilitate the expansion of production and sharing of expertise”.

But it also proposed that where voluntary cooperation fails, compulsory licences –without the consent of a patent holder – “are a legitimate tool in the context of a pan­demic”.

The EU wants other WTO members to agree on this and also to support manufacturers that are ready to produce vaccines and/or treatments at affordable prices under a compulsory licence.

It also wants other WTO members to agree that such compulsory licences could cover any exports destined to countries that lack manufacturing capacity, including via the Covax facility – the global initiative to provide vaccines to poorer countries. Ramaphosa welcomed the EU’s strong backing of compulsory licensing, which he said was an acknowledgment that the world was facing a pandemic that required emergency measures.

But he said such “in-country” compulsory licensing did not go far enough because it required legislative provisions in such countries, which took “a long time”.

Though Ramaphosa did not mention it, an important difference between the compulsory licensing proposed by the EU and the general waiver of Trips protection proposed by South Africa and India is that, under the Trips waiver, other manufacturers would not have to pay the patent holder.

Last week the European Parliament backed the Trips waiver, turning up the pressure on the EU itself to relent. “I’d like to believe that we are almost there and that the text-based negotiations are going to enhance an outcome that can be acceptable all round,” Ramaphosa said.

“We are in a war situation against Covid and we must therefore use every means we can to defeat this pandemic. And waiving the Trips provision is one of our best ways.”

Ramaphosa noted that only 2% of Africans had been vaccinated, compared with much higher percentages in the global North. “We should all be vaccinated. There should be equity and an end to vaccine nationalism… We are all safe or no one is safe from the pandemic,” he said.

Ramaphosa also welcomed the G7’s decisions to tackle the pandemic globally, including the $8.6-billion it had committed to date for providing more than one billion doses of Covid-19 vaccines through Covax.

The G7 communiqué made a commitment to share at least 870 million doses directly over the next year, and at least half of them by the end of 2021. This would bring the total supplied or financed by G7 countries to more than two billion vaccine doses. The G7 said it would work with the G30 and other countries to increase this contribution.

The G7 said its total commitment to the Access to Covid-19 Tools (ACT) Accelerator had now reached more than US$10-billion. This is a global collaboration to provide not only vaccines – through Covax – but also treatments, tests and support for strengthening public health systems to fight the pandemic.  “We are pleased that the G7 countries have committed quite a lot of support and assistance in the form of making vaccines available and in some cases allowing exports to go to African countries and other parts of the world and they have also committed financial support from … Covax and the ACT [Accelerator] where we are able to pool access to the various processes that we need to fight Covid-19,” Ramaphosa said.

He also called for greater global financial support to help African economies, including South Africa, to recover from the devastation caused by the pandemic. The G7 lent its support to prior decisions to instruct the International Monetary Fund (IMF) to make a special issue of $650-billion of special drawing rights (SDRs) to help refloat pandemic-hit economies.

These are allocated according to countries’ share of voting rights in the IMF, so African countries will only receive about $25.6-billion directly. But several rich countries have agreed to allocate their SDRs to poorer countries. The G7 communiqué proposed that $100-billion of the $650-billion should be allocated in this way.

Ramaphosa said South Africa was aiming for at least 25%, which would be in the region of $162-billion. “With that we believe that many economies would be able to have a measure of financial muscle to address the challenges which they face.”

The other major issue the G7 addressed was climate change. The summit recommitted G7 members to reach net zero greenhouse gas emissions by 2050 at the latest and to halve emissions by 2030.

“We all agree that, yes, we should move to net zero and we should position our economies to be less reliant on fossil fuels,” Ramaphosa said.

In its communiqué, the G7 did reiterate its earlier commitment to provide $100-billion a year to developing countries until 2025 to help them mitigate and adapt to climate change. But this target has not been met in past years, raising doubts about the sincerity of the commitment.

Ramaphosa also noted that the G7 leaders had proposed a 15% minimum global corporate tax to try to curb multinational corporations avoiding tax by domiciling in tax havens. There had been no time to discuss this proposal, he said. But he did remark that the tax base in G7 countries was much broader than in Africa and therefore hinted that he thought the minimum should be higher than 15%. DM168