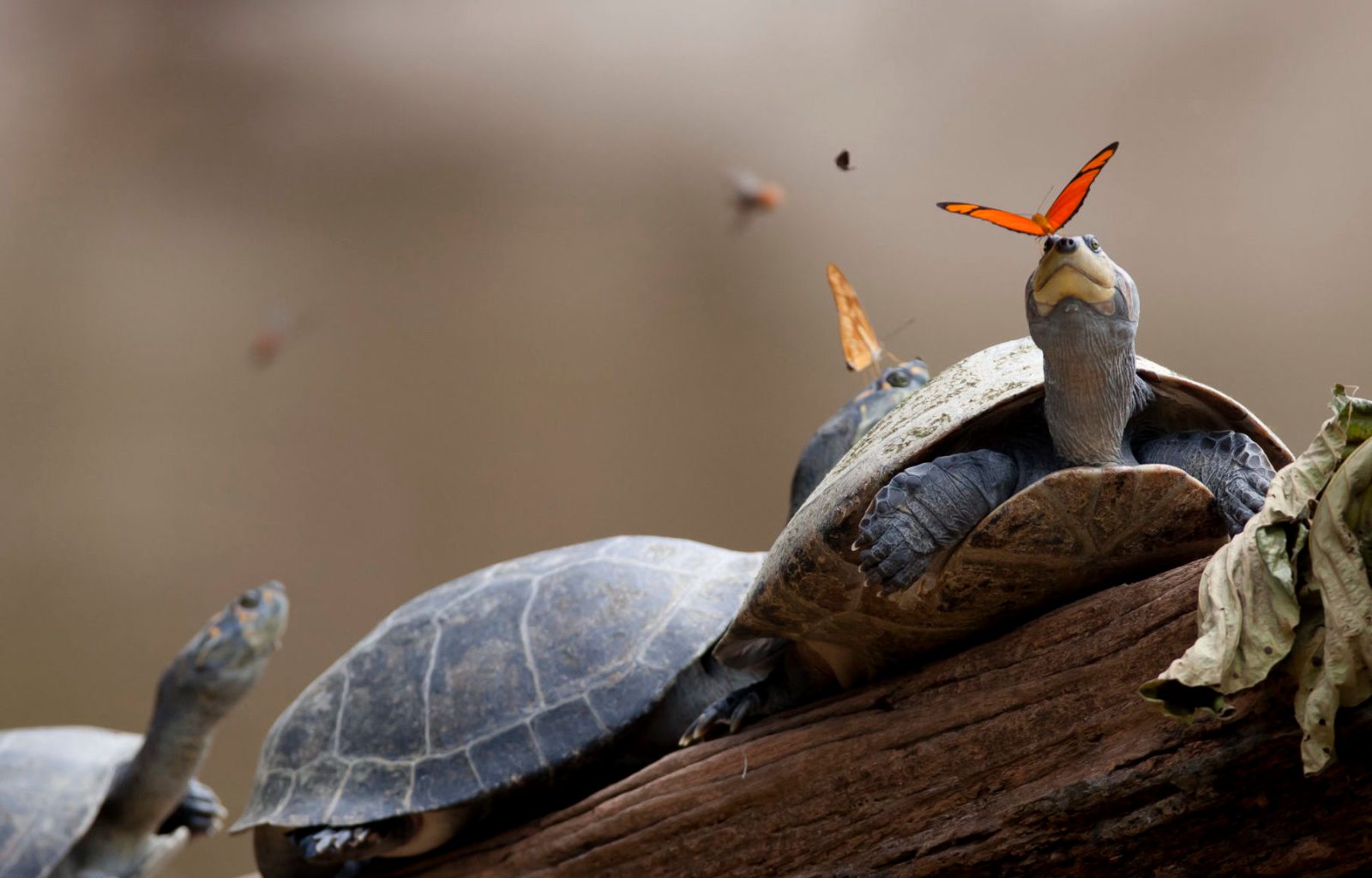 Wikipedia picture of the day on August 6, 2015: Two Julia Butterflies (Dryas iulia) drinking the tears of turtles in Ecuador. The turtles placidly permit the butterflies to sip from their eyes as they bask on a log. This "tear-feeding" is a phenomenon known as lachryphagy (Image: Antonio Velardo)

Did you know there are about 17,500 species of butterfly in the world? We take flight into the world of butterflies with three podcast episodes dedicated to these brightly coloured winged creatures.

Butterflies Are Secret Monsters – Science Vs

Butterflies sip turtle tears – add that to your list of fun facts for the next dinner party. It’s true. If you look it up, you will find delightful images (if not disturbing, and a reminder that nature is always surprising us in ways we did not expect.)

This is the topic of a phone call between host Wendy Zukerman and biologist Chandreyee Mitra, which begins the podcast episode with: “You usually see them sort of mobbing the turtle’s head, and it’s like, poor turtle!” This is not the rise of the butterflies against their turtle overlords; there must be a reason they are drinking tears, right?

Mitra and her team asked the same question, and it turns out that butterflies are after the salt in the tears, because they need it to help their nerves and muscles work, Zukerman explains.

The conversation takes another unexpected turn, because researchers then noticed that male butterflies were consuming more salt. “When you take a close look at who shows up around the watering hole, it’s kind of a sausage fest. It’s mostly the blokes… and Chandreyee wondered: Why? Like, why are the males mostly scrounging around for salt?” reflects Zukerman.

Mitra wanted answers, and began studying the effects of butterflies and salt. “For a while my Twitter handle was ‘Butterfly Voyeur’,” she laughs. “What we found was that males who’ve had salt actually mate more frequently than males who were given water.”

“How lucky they got”, Zukerman interjects.

And in the species Mitra was studying, Pipevine Swallowtails, she noticed that the males seemed to “show off” that they had salt.

“The courtship is really beautiful, the male making these vertical swoops around the female,” she says.

With Mitra’s enthusiastic descriptions of this “absolutely gorgeous blue and black butterfly with these beautiful tails” that “flash these crazy bright colours” when they move in the sun, it’s hard not to be drawn into this episode like a moth to a flame, or rather, like a butterfly to a turtle.

“I wanted to know, what’s it like to be a butterfly?” host Lizzie Peabody tells us. “But instead of a story of pretty little things floating from flower to flower, [ecologist Dara Satterfield] told me an adventure tale of survival, instinct and a migration that spans generations. The story doesn’t end when a caterpillar becomes a butterfly. Friends, that is just the beginning!”

Peabody’s description of these insects is magical: “Their wings have these bright-orange windows surrounded by black panes, ringed with little white dots, tiny stained-glass masterpieces.” It’s no wonder then that these butterflies captured Satterfield’s attention – she thinks of monarch butterflies as “the people’s bug”. Why? “We connect with them,” she says. “We connect with them in a way that we don’t with most insects, and I think that’s partly because of their migration story.”

Every year, monarchs travel more than 4,000km from the northeastern US and Canada to reach overwintering grounds in southwestern Mexico. “These half-gram heroes [are] on a dangerous mission,” Peabody says. (And yes, they really are that small, Satterfield tells us later, explaining that these butterflies have a wingspan of about four inches (10cm) and weigh about as much as a raisin.)

“We know that they go to the same 12 or so mountain tops every year, that their great-grandparents or maybe even great-great-grandparents had been to the year before. They’ve never been to these sites themselves. Somehow, they find them year after year,” Satterfield says.

That innate instinct is so strong, Satterfield says, that “even if you put them in a cage to study them, they will sometimes sit in the south or southwest corner of the cage. That’s how sort of driven they are to go that direction.”

And eventually, thousands of kilometres and generations later, they make it to Mexico.

“It is an incredible sensory experience,” Oberhauser says. You are drawn in, transported in the audio to a cold, misty mountain top. You can hear the jungle, and you can almost hear the beat of butterfly wings.

“We started seeing a few butterflies and they’re just a few flying around,” Oberhauser remembers. Then there’s around 30. Then 50. Then, suddenly, a cloud of orange and black,” Peabody describes.

“It’s overwhelming… it’s such a three-dimensional experience that the butterflies are just flying everywhere around you. They’re flying as high up as you can see in the sky and right down to the ground, and they’re covering the trees,” Oberhauser says.

“They have so many butterflies on them that it weighs down the branches,” Satterfield adds. Eventually, they’ll start their journey back home. But next year, it’ll start all over again.

Changing pace from the scientific to the whimsical, let Morgan Harper Nichols’s soothing and enchanting voice take you on a journey of butterfly migration. “I think about the journeys I’ve taken in my own life and how I look forward to arriving at the destination,” Nichols says. “The idea of travelling all of these miles, through multiple landscapes, terrains and weather conditions should result in finally arriving at a destination, right?”

But Nichols poses that there is a different lesson learnt from monarch butterflies, a “reminder of what it means to pave the way. To carry on, on a journey that you might not actually live to see the end of.”

In this four-minute podcast episode, Nichols reflects on human generational histories, likening our own journeys to butterflies who only live a few a weeks but are as intrinsically a part of the migration even though they may not start or finish it – this interconnectedness that ties monarchs together is within our humanity, too.

Further, Nichols ponders what this means for us as humans. We are all drawn to the destination, the win, the prize, but butterflies remind us that this is not the end goal. “What greater journey are we willing to be a part of, even if it’s only for a limited time? Even if it’s someone else who lives to see the finish line?” Nichols asks. Here, whether purposely or not, there is a feeling of the butterfly effect (no pun intended), one action affects another, and so forth. Are you willing to be a part of the greater journey, even if you don’t get to see the end of it?

Nichols ends this reflection with a poem – a reminder to be more like monarch butterflies – a portion quoted here:

what your impact will be

Semigration: Is it time to leave the city?