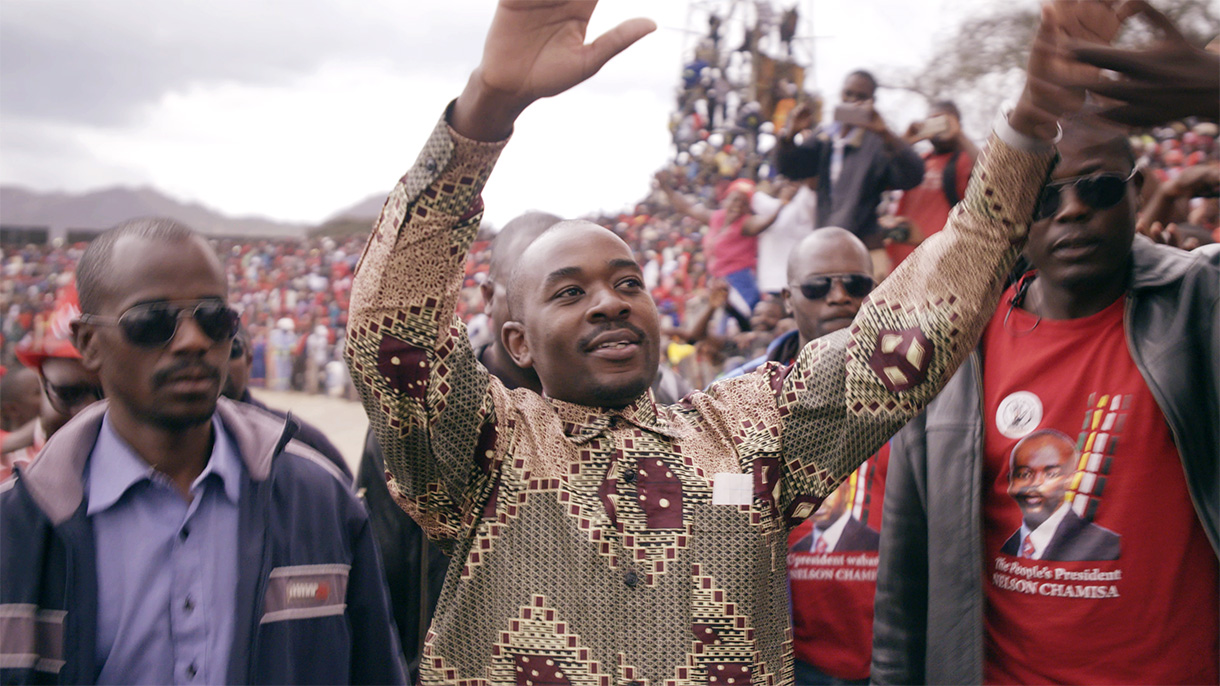 A scene from 'President' by journalist/filmmaker Camilla Nielsson. (Image supplied)

Public law specialist Alex Magaisa, award-winning journalist and filmmaker Hopewell Chin’ono and Camilla Nielsson, director of President, discuss the making of the film and the Zimbabwean electoral system. Nielsson contends that ‘the international community let the Zimbabweans down big time on this one’.

President details the rigged 2018 Zimbabwean elections from within the campaign of Nelson Chamisa, the president of the Movement for Democratic Change (MDC) Alliance (the opposition party). The film follows the buildup to the elections, the corruption involved in the electoral process itself, and the disappointing aftermath of Zanu-PF’s stolen victory.

In 2014 Nielsson had released a documentary titled Democrats about the construction of Zimbabwe’s first Constitution between 2010 and 2013 — a tenuous process which public law specialist Alex Magaisa was a technical adviser to. The film was banned in Zimbabwe without proper legal justification by the government under Robert Mugabe. The only reason provided for its prohibition was that it was “not suitable to showing to the public”.

Several lawyers who had been involved in the writing of the Constitution, including Magaisa, suggested to Nielsson that she try the ban in court, as it was clearly in contradiction with the Bill of Rights that ensured freedom of speech.

Nielsson was determined to win the case, not only because a film about Zimbabweans writing their own Constitution is an important film for people to see, but also because she hoped that if they managed to get the ban revoked, it would “help lift the bar of how much you could criticise a government and maybe create a kind of legal proceedings for other filmmakers, journalists, and storytellers within Zimbabwe”.

Nielsson’s team won the court case. In early 2018, and on that very night, it was proposed to her that she make a sequel about the upcoming elections. She returned to Zimbabwe after the coup that removed Mugabe from power and set about filming President.

Chin’ono praises the film for contextualising the complex and somewhat depressing state of Zimbabwean post-Mugabe politics.

“What I liked about the film — it showed some of the misconceptions. I was one of the people who thought there would be real change because I never thought somebody could lower their bar below Robert Mugabe’s. Watching this new film, I remember there’s a part where Chamisa says ‘it’s great that Mugabe is gone. Nothing can stop us now.’ It’s a misconception that many of us had, actually — assuming that Robert Mugabe was the head (that needed to) roll, but we have since discovered that it wasn’t Mugabe, it’s the whole system.”

Indeed, Chin’ono describes sitting Zimbabwe president Emmerson Mnangagwa as even more ruthless than Mugabe. “If Robert Mugabe wanted to clap you he’d go and create a law, then he’d come and clap you and you will complain about it, and he’d say, “but this is what the law says!”, but Mnangagwa was completely different — he would just bulldoze his way through.”

Chin’ono also speaks about several methods of spin and electoral corruption practised by Mnangagwa’s regime, such as the inflating of numbers at unregulated polling stations and the registration crisis that has been created as a method of control, whereby less than 1% of new voters have been able to register. He reports that powerful people from Zanu-PF have tried to coopt Magaisa and himself in the past, a spin strategy that the party relies on to project credibility to the world.

Though Nielsson tried hard to gain access to both the ruling party and the opposition, as she had done in Democrats, Zanu-PF was unwilling to cooperate. She admits that despite her access to the MDC team during the filming of President, she didn’t anticipate the split in the party that occurred after the election. Her sense at the time was that internationally, and within Zimbabwe, the focus was on the opposition party finally seizing power, rather than internal politics.

In response to Magaisa’s raising the issue of the lack of women in Zimbabwean politics, Nielsson references the harassment of female activists in Zimbabwe, the danger they face and the lack of support provided to them.

Nielsson says that for her, a serious sign that something was going wrong in the election process was how impossible it was for MDC to get a meeting with any commissioner in the ZEC (Zimbabwean Electoral Commission). She reports having over 40 hours of footage of the MDC team strategising about how to get hold of them.

Chin’ono seconds this sentiment, citing Zanu-PF’s complacency in the face of ZEC’s shortcomings. “It’s very unusual for a political party not to find something they don’t like in an electoral process, but Zanu-PF never complained.”

Chin’ono says “even Chamisa in the MDC and Morgan Tsvangirai, during the coup and just after the coup, they actually thought the other side was going to reach out. But as we now know, the other side used the election as a consolidation method so that they could continue with the looting of public funds and the plan of the nation’s special resources, something that we thought was going to be stopped by the coup.”

Both Nielsson and Chin’ono speak about how the international community facilitated the failure of Zimbabwe’s democratic process in 2018. Chin’ono describes British media during the coup as having been exuberant and having inadvertently prepared the world to accept Mnangagwa as a reformer.

“As a filmmaker”, Nielsson says, “who observed the whole election process, I really feel that the international community let the Zimbabweans down big time on this one. There was so much celebration that Mugabe was gone. It didn’t take a political scientist with a PhD to think that [Mnangagwa] who worked as his right-hand man for many years, wouldn’t be a born again Democrat overnight, you know, you didn’t have to be a political prodigy to see that.

“As a foreigner, as a European, as a non-Zimbabwean, I feel that it’s highly problematic that we come to Zimbabwe as observer teams with some sort of authority, and then when things get muddy, or devastating as they did on August 1st, where the military took to the streets and killed six civilians and wounded many more, we have this anxiety about really digging into what exactly happened. And we take our European passports and jump on the next plane and don’t deal with this.

“I think maybe we shouldn’t even have come. The international community or at least in the form of election observers, have a problematic role in that sense because if they are present, the ruling you can say, “well, it was a free and fair election. There were 40 different election observer teams here from all over the world. What’s the problem?” So our presence in a way helps legitimise a regime like Mnangagwa’s.”

Chin’ono praises the film’s depiction of Chamisa’s minuscule campaign budget. He encourages Zimbabweans to put their money where their mouth is and back the MDC in any way they can, rather than criticising them from their armchairs because he believes that the MDC would represent the greatest chance for significant change in Zimbabwe. DM