Immigrant shop owners plead to be allowed to continue t... 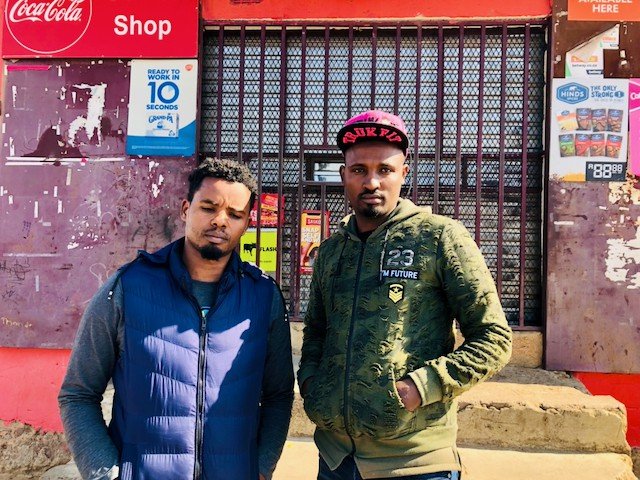 Taniko Jaban and his cousin Daniel Bayan were pepper-sprayed and told their shop would be torched with them in it. They have lived in Diepkloof for four years. (Photo: Kimberly Mutandiro)

‘All we want is to operate our shops and look after our families,’ say shop owners, who report sporadic looting, intimidation and a lack of police support.

Diepkloof, Soweto, was tense on Friday while immigrant-owned shops remained closed since 16 June. A group calling themselves Operation Dudula closed the shops and said immigrant shop owners must leave the community.

Shop owners told GroundUp that threats started on 14 June with fliers circulating saying all “illegal” foreign shop owners must leave. On 16 June some shops were looted and their owners forced to leave.

The shop owners say police did not intervene to help them. They also claim that police refused to let them open cases of harassment.

But Diepkloof police spokesperson Matlou Mteto said police were protecting the shop owners. “We have been making patrols in the whole Soweto to ensure that there are no illegal gatherings in order to stop any action against the shop owners.”

However, she confirmed that no arrests have been made.

“If the shop owners have not been allowed to open cases they should report to the station commander,” said Mteto.

The immigrants say their asylum permits and refugee papers show expired dates due to the Covid-19 lockdown, even though they remain valid. They say residents refuse to believe them.

On Friday, some who tried to open for business say they were pepper-sprayed and threatened. They were insulted and told to leave the community. Their landlords were also told their houses would be burnt down.

“We are sleeping in the woods,” said Tosiso Tedemsten, originally from Ethiopia, who has had a shop in Diepkloof for 11 years. On 16 June, some of his stock was looted.

“We are not criminals. Neither are we illegal. All we want is to operate our shops and look after our families,” he said.

Busisiwe Nkabinde, Tedemsten’s landlord, said: “They have threatened to burn my house if l allow the shop owner to re-open. But how will we survive because we rely on the rent. They used to help not only me but the whole community with groceries during lockdown.”

Tavek Samuro says half his stock was looted, not for the first time either. “I look after my wife and children here in South Africa. My family back home also look up to me. We have suffered and no one has bothered to hear us,” he says.

Taniko Jaban and his cousin Daniel Bayan went to assess the damage caused by looting and were pepper-sprayed. They were told their shop would be torched with them in it. They have lived in the community for four years.

“Don’t tell me that we will have to travel all the way to the mall to just buy bread,” complained Kabulile Mbatha, who rents out a shop premises. “The foreign shop owners are a big help to our community.” She said they had made donations to the community throughout the lockdown.

Winnie Radebe, of the Dudula movement, said, “If us locals operate with no permits we face closure or are penalised. The same should be done with illegal foreign shop owners.” DM