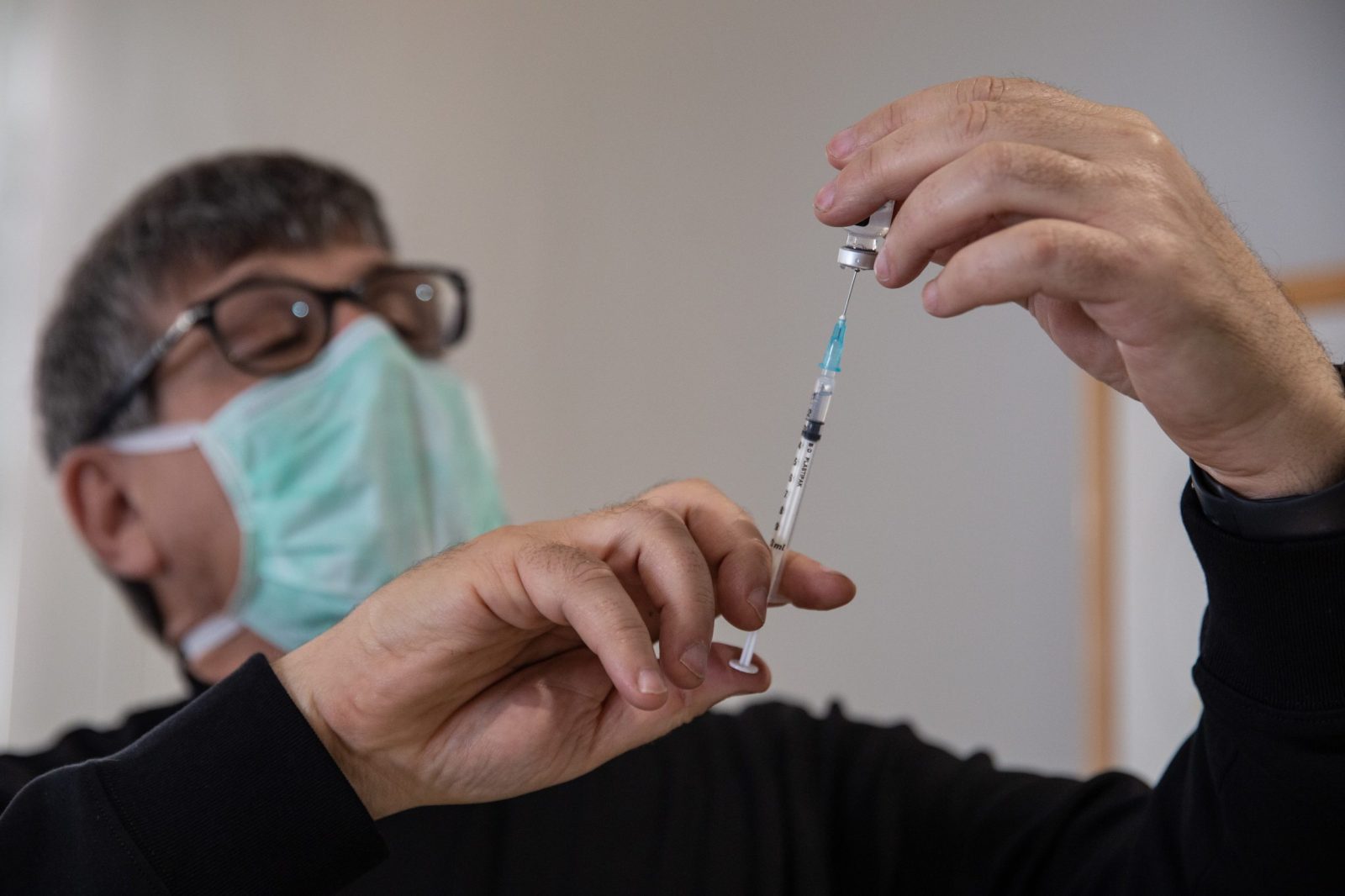 Because of the syringes being used, vaccinators are getting fewer doses per vial than Pfizer states.

The health department may be overcounting its supply of the Pfizer Covid-19 vaccine being used in South Africa.

The vaccines are stored in vials supposedly containing six doses. But it is hard for vaccinators to get more than five doses out of a vial.

This is how vaccine doses are prepared: Vaccinators add 1.8 millilitres (ml) of normal saline to each vial. The vial, now containing 2.25ml of liquid, is gently mixed, and 0.3ml doses are extracted using dosing needles. If there is less than 0.3ml remaining in a vial, this is discarded.

When using a standard 3ml needle/syringe combination, about 0.08ml of fluid is left in the syringe’s so-called dead space after injection, and that is also discarded. In 1ml standard syringes, this figure is smaller. But there is a class of needles and syringes that minimise this wastage called low dead volume (or low dead space) syringes and needles.

When it was first approved in the US, Pfizer’s vaccine vials could only be said to hold five doses, and each vial had a portion of overfill. Then on 6 January 2021, the US Food and Drug Administration, following Pfizer’s submissions, granted Pfizer approval to state that there are six doses per vial. This result was achieved by Pfizer experimenting with the use of low dead volume syringes.

According to the World Health Organization, if six doses per vial is to be achieved, “the low dead-volume syringe and needle combination should have a dead volume of no more than 35 microlitres [35µL, or 0.035ml]”.

A circular from South Africa’s National Department of Health to private healthcare companies in May said that, “The price of the Pfizer vaccine from the distributor will be R308.48 per dose. There are 6 doses of the vaccine in a vial; hence the cost per vial is R1,850.88.”

The implication in this paragraph is that we are paying Pfizer per dose, and that each vial will produce six doses. We can assume therefore that this six-dose-per-vial number is used by the health department in its announcements about how many doses we have received thus far and how many we can expect to receive in the coming months.

But this six-dose outcome is far from assured. Vaccinators who have spoken to GroundUp say that achieving six doses from a vial is very difficult with the dosing syringes being supplied.

Six doses per vial can only reliably be achieved using low dead volume or low dead space syringes or needles. GroundUp has asked the health department whether it is counting six doses per vial in its calculations of the total number of doses received. We have received no response.

At midnight on 16 June, 1,494,331 first doses of the Pfizer vaccine had been administered — that’s R461-million-worth of vaccine doses. But we are paying per vial. If we assume that we are only securing five doses per vial at the moment, then we may have lost up to 300,000 doses, worth R92-million.

The six dose revelation came as a surprise to syringe and needle manufacturers. According to Bloomberg in February, low-dead space syringes comprised just 40 million of the 286 million needles and syringes that Becton Dickinson, the world’s largest needle and syringe manufacturer, had been contracted by the US government to deliver for the vaccination programme. According to the Washington Post, Pfizer has now “validated 35 syringe-needle combos to get six doses out of the vials”, but only a few manufacturers are capable of producing these types of syringes and needles.

In February, Japanese Health Minister Norihisa Tamura revised down the number of doses available to the country’s population from 144 million to 120 million, after it was revealed that there was a shortage of low dead space volume syringes in the country. (Unlike South Africa, Japan calculates its total doses by what can be achieved with the tools at hand.)

In March, Medical Research Council head Glenda Gray raised concerns about a possible low dead volume needle and syringe supply shortage. In May, the Wall Street Journal reported that there was a looming global shortage of low-dead-volume syringes and needles, and that eight US states had reported that they were not being given enough low dead volume syringes to extract six doses. The Wall Street Journal also reported that increased supply of these syringes “isn’t expected to occur in the US until the second half of the year.”

In the US, unlike South Africa, Pfizer ships its vaccines with appropriate needles and syringes.

If wealthy countries can’t get these low dead volume syringes — what about us?

According to Business for South Africa (B4SA), part of the state tender for Covid-19 vaccine syringes for (the 1ml and 0.5ml syringes) was awarded “about four weeks ago”. According to B4SA, “The 0.3ml syringe contract has not yet been awarded, and is currently outstanding due to these syringes awaiting SABS approval … the Pfizer vaccine requires a 0.3ml syringe to optimise its administration.”

Becton Dickinson confirmed with GroundUp that it was one of the successful bidders in this contract and that this order includes a provision for low dead volume syringes.

GroundUp has been trying to receive an answer from the health department since the beginning of June on the state of low dead volume syringes and needles. Repeated inquiries were made to Popo Maja, Head Of Communications at the Department of Health, as well as to Khutso Rabothata, spokesperson for the Deputy Minister Dr Joe Phaahla. We have received no response. The National Treasury’s broken eTender portal does not show any information on the contract award for this tender, nor does the health department’s official website.

The list of bidders for what appears to be the contract for syringes can be found here, and the special condition of the contract here. No mention of low dead volume syringes is made in either document, and no other document is apparently available on this tender or its award.

In a teleconference with the health department on 18 June, GroundUp asked the following:

In response, Dr Nicolas Crisp responded that “the national tender that was issued includes 80 million needles and these are either delivered or already in transit. We believe that the supplies of needles are in hand.” Pressed further, Crisp said that “supply is constrained but we are expecting delivery of 54 million 1ml syringes starting end of June.” However, at no point did Crisp specify whether these syringes are low dead volume or not.

One ml standard syringes produce better results than 3ml standard syringes because there will be less of the dose left between the plunger and the tip of the needle after a dose is used. However, it is not clear whether the 0.035ml threshold of leftover is met with these needles if they are of the standard variety.

We have made a number of inquiries to officials involved in the vaccine rollout over three weeks. If anyone provides us with useful information, we will update this accordingly. DM