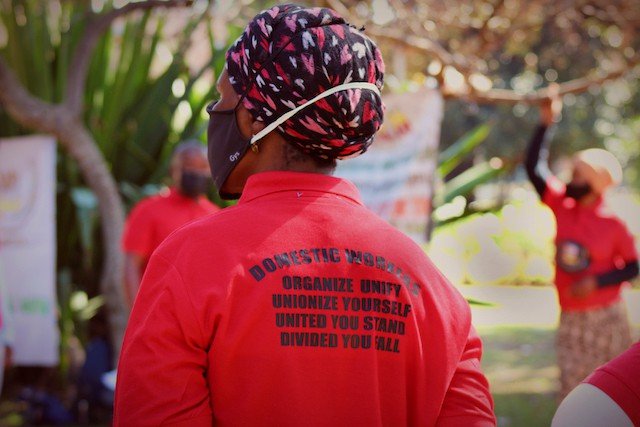 ‘There are still a number of our rights that are not recognised. We still have to fight,’ argue Udwosa activists citing Maria Mahlangu case.

“We made history after winning the fight for the inclusion of domestic workers in the Compensation for Occupational Injuries and Diseases Act (Coida),” says Pinky Mashiane of United Domestic Workers of South Africa (Udwosa).

Mashiane was addressing a group of about 40 domestic workers gathered at Burger’s Park in Pretoria, to celebrate International Domestic Workers Day on Wednesday.

Mashiane gave the group an update on Maria Mahlangu’s Coida claim. Mahlangu’s case led to a Constitutional Court ruling in November last year that declared the exclusion of domestic workers from Coida unconstitutional, and that the Act applied retrospectively to 27 April 1994.

Mashiane said she had previously had an experience with an official from the Compensation Fund who was unfamiliar with the retrospective claims process. Following the meeting on Friday, Mashiane said she felt encouraged.

According to Mashiane, Msiza told her that Mahlangu’s claim is being held up because the family she had worked for before she died is refusing to fill in the Compensation Fund forms.

Sylvia Mahlangu, her daughter, told GroundUp that she is considering legal action against the family. “I want the employers to appear in court and tell us what exactly happened when my mother died,” said Mahlangu.

According to Mashiane, the process cannot proceed without the signed Compensation Fund forms. She said getting employers to sign the forms is one of the most challenging parts of the claim process.

“This is exactly why we are calling for the retrospective claims period to be increased to 36 months. Some people still have to go and find their former employers who have sold their houses and moved to new places,” she said.

“The extension of the prescription period for claims is part of the Amendment Bill that is currently in Parliament. We don’t know when Parliament will conclude their processes,” said Mafata.

Mashiane, together with other Udwosa members, produced a comedy sketch to educate domestic workers about how to apply for Coida. The skit was performed at Burger’s Park as part of the day’s celebrations.

Rose Mahlangu, one of the domestic workers who performed in it, said, “It is great that domestic workers will be compensated for injuries, diseases and death sustained while at work. However, there are still a number of our rights as domestic workers that are not recognised. We still have to fight.”

Mashiane said, while it was important to celebrate the victories, it was equally important to note that there are still many challenges that domestic workers are fighting against. DM