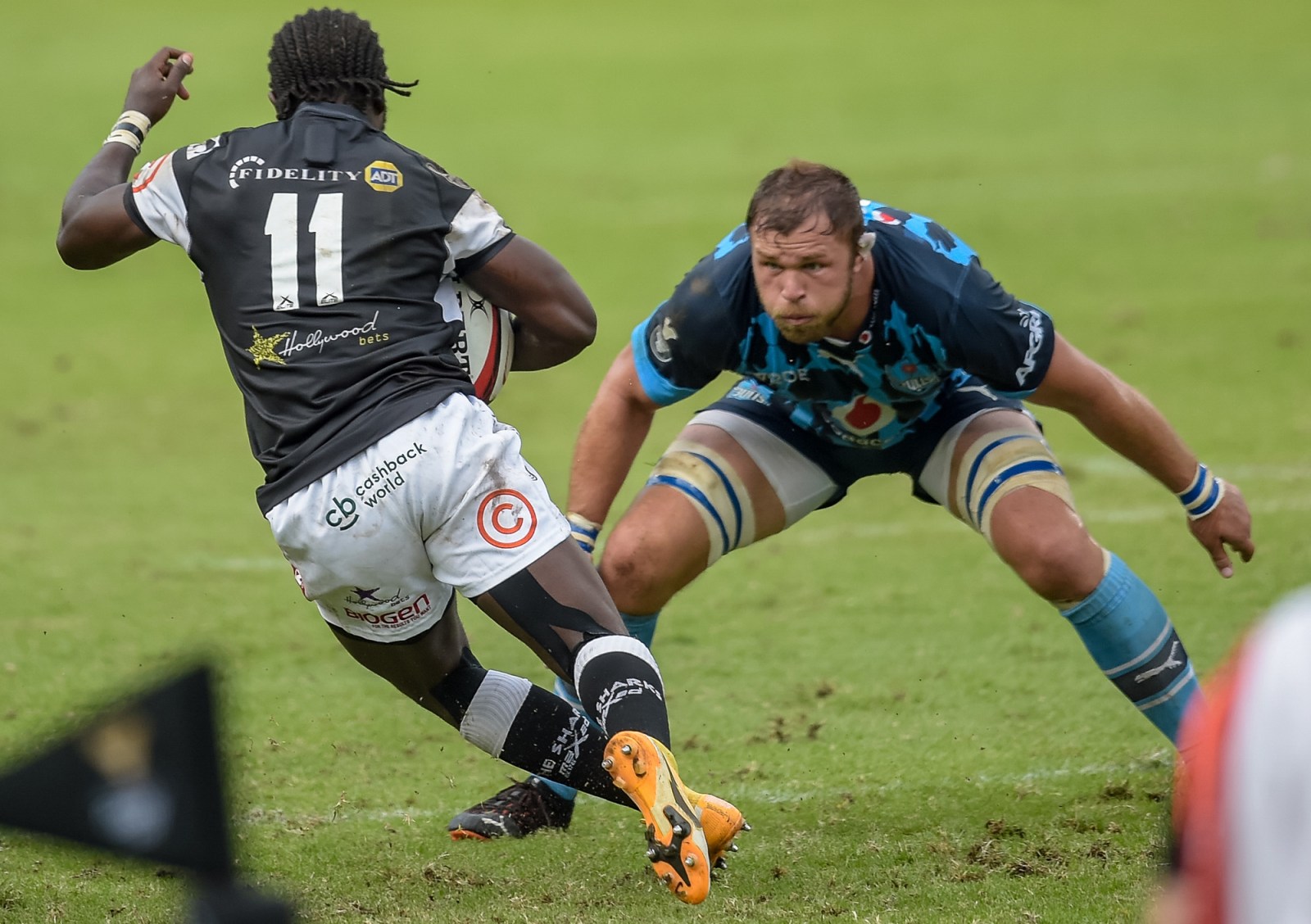 Yaw Penxe of the Sharks tries to evade Duane Vermeulen of the Bulls during the Carling Currie Cup final at Loftus Versfeld in Pretoria on 30 January 2021. (Photo: Christiaan Kotze / Gallo Images)

The Bulls could become the first and only Rainbow Cup champions when they meet Italian side Benetton in the final in Treviso on Saturday. But it falls on the same day as the start of the defence of their Currie Cup title.

Jake White’s Bulls have established themselves as the most powerful team in South Africa since lockdown restrictions were lifted last September, but the challenges keep on coming.

The “first team”, barring players in the Springbok squad preparing for July Tests against Georgia and the British & Irish Lions, will take on Benetton at their home ground to decide the Rainbow Cup winner.

Two hours before that game starts, the Blue Bulls meet Western Province in the opening game of the 2021 Currie Cup competition. It’s given Pine Pienaar, who is coaching the Currie Cup team in the absence of White, a selection headache.

There are 28 first-choice players in Italy, a further six with the Junior Springbok squad, four with the Boks, two with the Blitzboks and four injured, leaving the Blue Bulls without 44 players for Currie Cup duty. It does bring the integrity of the Currie Cup into question, especially as opponents WP are also without a raft of players according to assistant coach Rito Hlungwani.

“We’re all aware that the Bulls are in Italy but if you look at our squad, we’re also sitting with 28 players who are not available, whether through Springboks call-ups, injuries and maybe a little bit of illness,” Hlungwani said at a media briefing this week.

“It’s always tough to play at Loftus and looking at their situation and our situation, the only difference is that we’re not going to Italy.”

The Bulls won the hastily convened “Super Rugby Unlocked”, which was a shortened version of Super Rugby only involving South African franchises. That, unbelievably, was the Bulls’ first silverware in a decade.

The Bulls followed that with success in the Currie Cup and added the low-key Preparation Cup as a third “title” in six months. They now have the chance to add the Rainbow Cup. Ironically, if they succeed against Benetton, it will be a third title in competitions that are unlikely to ever be played again.

The Rainbow Cup was another Covid-19-induced competition that replaced PRO14, the cross-border competition featuring teams from South Africa, Ireland, Wales, Scotland and Italy.

From September 2021, South Africa’s four leading franchises will be involved in the inaugural United Rugby Championship (URC) against its Celtic and Italian rivals, which is where its future lies.

White’s team finished eight points clear at the top of the South African Rainbow Cup standings to qualify for the final, after losing only one of their six fixtures.

Benetton were the surprise package of the northern hemisphere section of the Rainbow Cup, finishing as the only unbeaten team in the group phase of the competition.

In a twist of fate, Benetton will play at home. Treviso was picked as the final host months ago, and it’s a happy coincidence the Italian side qualified for the final. They have won all four games at this venue since their defeat to the Cardiff Blues in March.

They have featured in 20 Italian Championship finals, winning 12 and losing eight, while flyhalf Paolo Garbisi ended the league stage as joint top scorer in the northern section with 52 points.

“Even though it’s such a huge honour to be part of this historic game, we must remember that we are here on a mission… a mission to return to South Africa with the Rainbow Cup,” White said from Italy.

“I’ve asked the boys to enjoy every moment of this experience, as they have worked really hard and been committed to our goals. Being in this final is the first part of their reward, lifting the trophy will be their ultimate reward. Benetton is a great team, and have been in amazing form this season and it is a privilege going up against them in the final.”

Bulls captain Marcell Coetzee, who spent four seasons in Europe with Ulster, warned his team that they will have to adapt to northern hemisphere refereeing interpretations.

“The thing we’ve found is that refs are far more cautious with high tackles here up north,” Coetzee said from Treviso this week. Our body position height is going to be important. We’re going to have to be squeaky clean.

“During my time in Europe I also saw that if you just tackle a little bit over the top, the whole complexion of a game can change for you. In a final, you really want all your personnel on the field. The breakdown is also going to be important, it’s a bit looser and the interpretations are more open, but we have to adapt.”

According to Benetton’s South African-born scrumhalf and captain, Dewaldt Duvenage, there is a special rugby festival atmosphere in Treviso that will be an additional spur for his team on Saturday.

Duvenage, who represented South Africa at U20 level and played for the Stormers for several years before leaving for Italy in 2017, warned that the Treviso players have been energised around the buzz generated by their rare appearance in a final.

“We managed to make the PRO14 quarterfinals a couple of years ago and that was a huge thing, but we are an old club and this is our first final so this is an even bigger thing,” said Duvenage.

“Having made the quarterfinal and lost, we now want to take the next step by not only playing in a final but winning it. There is plenty of motivation and it is being helped by the atmosphere that is enveloping this game. We will have fans back – 1,500 of them – for the first time since the start of the pandemic, and we are really looking forward to that.”