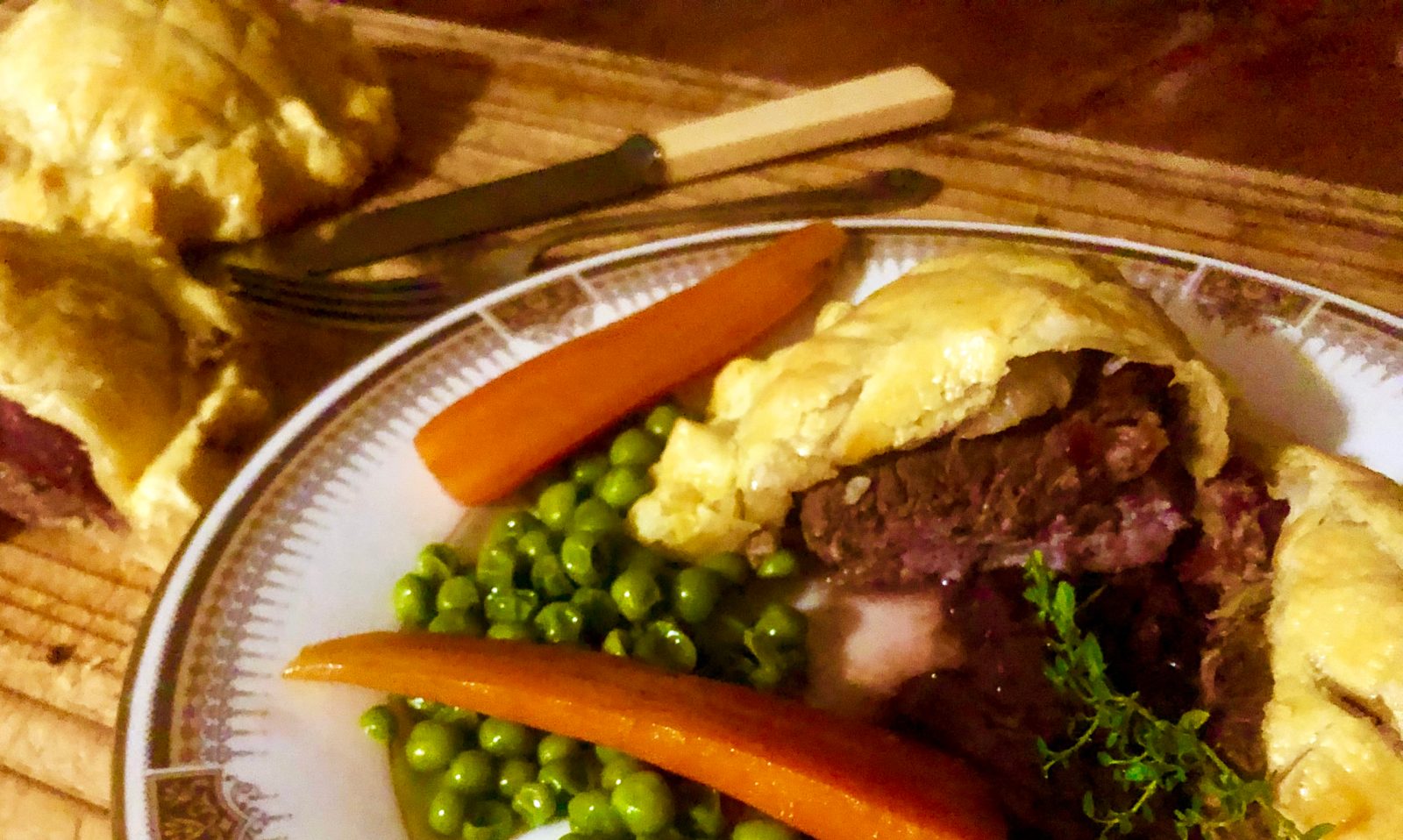 There’s something about Beef Wellington. It might seem to be a pie, but there’s more to it than just wrapping some meat in pastry and shoving it in the oven.

It is the way of things today that almost any classic dish will be taken by an inventive chef and changed, or “reimagined” to “make it my own”, thereby changing it from what it is or was into something that it is not, so on this or that menu there will be Lamb Wellington, Pork Wellington, Springbok Wellington, even Fish Wellington. God forbid that any modern chef should honour the roots and tradition of a dish and actually just make it perfectly, the way it was always meant to be made. It is intended for rare beef fillet. Simple as that.

As for its ancestry, it’s all rather muddy. There’s no known direct or undisputed link to the Duke of Wellington, so no quaint story of how it might have been served to him and how he might have swooned like the Sultan on being given a platter of Imam Bayildi for the first time. The name of the dish has been traced to the dining room menu of the Hamburg-America Line in 1899, to a classic Polish cookbook published in 1910, amid a few other obscure references, although there are claims dating as far back as 1815.

One school of thought has Wellington having been served goat meat somewhere in Africa and the dish somehow deriving from that, a theory too outlandish to be taken seriously.

Gordon Ramsay’s website makes a bald claim about its origins, then swiftly backtracks, to its credit: “It is generally agreed that the dish was created in celebration of the first Duke of Wellington, Arthur Wellesley, and his victory at the Battle of Waterloo on June 18, 1815… such an iconic character needed immortalising, so (naturally) they named a pastry ensconced beef dish after him.” Rather than just put up a statue.

But the Beef Wellington page on Ramsay’s site (I refer to it because he has become known as an exponent of the dish in recent years) does ultimately conclude that “it appears that there’s no clear-cut answer about the true history of Beef Wellington and where the dish originated. Like many of the world’s best dishes, it takes inspiration from many different places and has developed organically into what it is today”. And there’s the ring of truth in that.

What we do know is that it is a dish of a seared beef fillet, either whole or a piece of it, topped by duxelles (mushrooms simmered with onion, garlic and parsley, though I prefer to use thyme), with a layer of pâté de foie gras, encased in puff pastry and baked in the oven. And it is within that encased brilliance that the magic happens that turns a mere “pie” into something beautiful and extraordinary. I would add that the pâté, while being cooked, should be flambéed with Cognac or brandy, which adds a great deal of superb flavour to it with very little effort. In my own rendering, I leave out the cream that is usually added to such a pâté, as I prefer the strength of flavour and the slightly coarser texture there is without cream.

I have another trick: I have bacon for breakfast on the day I’m cooking a Beef Wellington, and I use the remaining bacon fat for cooking the steak, the onions, and the mushrooms, and then the chicken livers (or foie gras if you’re pushing the boat out, but who can afford that?). It lends every element a deeper and more complex flavour.

I made individual Wellingtons, but you could make a large one and slice it into thick portions. I also happened to have some kapokbos prosciutto from George Thompson’s Spekbossie cured meats range.

8 slices of prosciutto or parma ham

Rub olive oil all over the steaks, season with salt, and fry them on all sides until well browned. This is the only cooking they will have before being encased in pastry and put into the oven. I cooked them, as I said, in the bacon pan.

Cook finely chopped button mushrooms (in the bacon pan if you like), adding a little olive oil if needed, until they release their juices, then cook the juices away. Season with salt and black pepper.

Sauté half an onion, finely chopped, in butter with a couple of thyme sprigs, then add 4 Tbsp more butter and cook the chicken livers, turning once, also with a few thyme sprigs. They need to be pink in the middle. Season with salt and black pepper, add a tot of Cognac or brandy and flambé it until the flames die down. Leave to cool, then blend in a food processor.

Leave everything to cool before rolling out the puff pastry and assembling the Wellingtons. The pastry should be about 4 mm thick; if it is too thick, the pastry may inhibit the cooking of the fillet within; too thin and it might puncture and the contents seep out.

Cut out pastry circles large enough to hold a fillet in the centre with about 2.5 cm extra pastry all round. Cut a second round just a little smaller, for each Wellington.

Spoon some of the pâté in the middle of each pastry round and spread it around but not to the edges.

Overlap two slices of Parma ham or prosciutto (more if they’re small) in the centre of each pastry round and place a fillet on it. Spoon some duxelles on top.

Wrap the ham around, neatly.

Beat an egg and brush it around the edges of the pastry, generously. Place the smaller pastry rounds on top, fold in the pastry and crimp the edges with your fingers. Score the pastry on top in a diamond pattern, very lightly, with a knife. Don’t pierce the pastry. Brush more eggwash on top. Put them in the fridge to chill for half an hour.

Bake in a preheated 220℃ oven (or higher) for about 15 minutes until the crust is well browned, or slightly less time for a rarer centre.

I made a red wine and mustard sauce to go with it, flavoured with thyme. DM/TGIFood