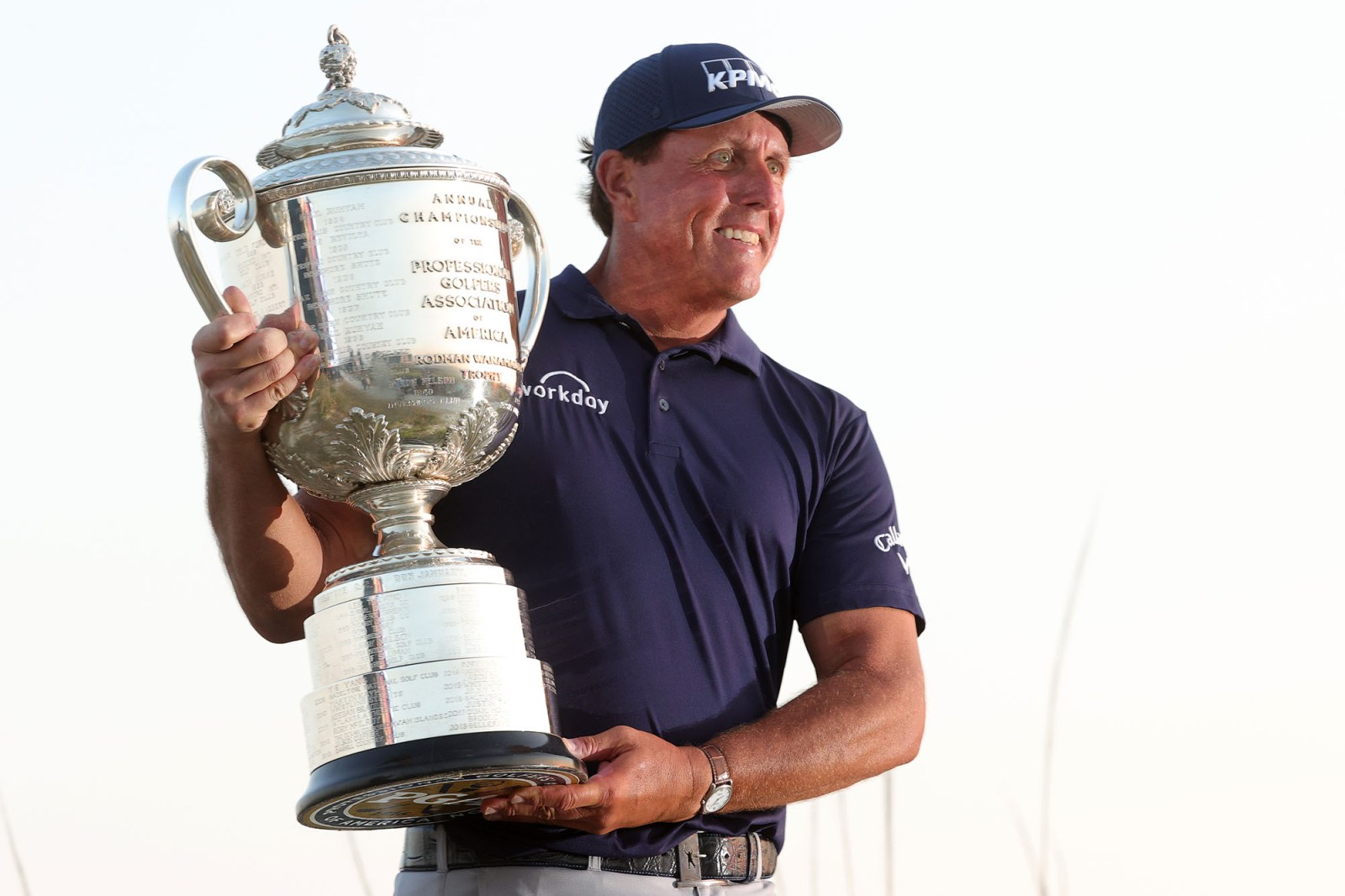 Phil Mickelson of the United States celebrates with the Wanamaker Trophy after winning during the final round of the 2021 PGA Championship held at the Ocean Course of Kiawah Island Golf Resort on May 23, 2021 in Kiawah Island, South Carolina. (Photo by Stacy Revere/Getty Images)

The 121st US Open starts at Torrey Pines Golf Club on Thursday with 51-year-old local Phil Mickelson as its focal point.

Last month Phil Mickelson won the US PGA Championship on the brutal Ocean Course at Kiawah Island, to become the oldest major winner in golfing history. He was 50 at the time.

It was a seismic achievement in a sport that is more forgiving for players over 35 years old, but even so, the previous oldest major winner had been Julius Boros who was 48.

For the left-handed Mickelson, his left-field PGA victory immediately reignited a conversation about one of professional sport’s apparent biggest injustices — that Phil has never won the US Open.

For the all-American kid from California, who won his first tournament on the PGA Tour as an amateur (in 1991) and who was also a US Amateur champion in 1990 — when he beat South Africa’s Manny Zerman 5&4 in the matchplay final — it seemed only a matter of time before he won his nation’s Open title.

But 30 years on and 29 US Open appearances later that have yielded six runners-up finishes, it seemed his chance had gone. Until his heroics at Kiawah last month rekindled optimism that he might finally secure the only major missing from CV at Torrey Pines — a course that is a few kilometres from his home.

Phil most infamously came closest at the 2006 US Open at Winged Foot. Mickelson had won the previous two majors (the 2005 PGA and the 2006 Masters) and was on course to win a third straight major and his first US Open.

But on the 72nd and final hole, with a one-shot lead, Mickelson chose an aggressive play, using his driver and he ended up in a corporate hospitality enclosure. He could have chipped out on the fairway, but he tried another aggressive shot and ended up hitting a tree. He then plugged his third in a greenside bunker and ended up making double-bogey, to give a slightly stunned Geoff Ogilvy the US Open title.

That was the zenith of the US Open heartbreak for Mickelson because it was the one he lost. On the other five occasions, he was runner-up, he didn’t blow it on the final hole.

Before the PGA Championship heroics last month, it seemed that Mickelson would end his career without a US Open. A golfing crime equivalent to Ernie Els not having a Masters green jacket (ironically Mickelson denied Els his best chance in 2004). Mickelson might still not win a US Open, but in 2021, there is hope for Lefty.

Thanks to the performance at Kiawah, Mickelson quite unexpectedly enters this year’s tournament as a legitimate contender even though he turned 51 on 16 June.

At Kiawah, he drove the ball longer than almost anyone in the field and he drove it straighter than most — components that are key to US Open success. Of course, winning at 50 is such an outlier of a result that expecting him to do it again, really is like expecting lightning to strike the same place twice.

But why not? His form is good and the tournament is on a course that Phil grew up playing on, although it’s a different layout these days.

“It’s a unique opportunity because I’ve never won a US Open,” Mickelson pointed out to the media as if any reminder were necessary. “It’s in my backyard. I have a chance to prepare properly, and I wanted to put in the right work.

“Now, you always need some luck, you always need things to come together and click, but I know that I’m playing well, and I just wanted to give myself every opportunity to be in play at my best.”

Mickelson, who has only played once since winning the PGA, has spent a lot of time practising at Torrey Pines, which underwent a facelift several years ago. Despite his local knowledge of the layout, Mickelson had to learn some new nuances.

“I put a lot of time in on the greens, because even though they’re not at tournament speed, I needed to kind of relearn and see the breaks and know what the ball does on these greens,” Mickelson said.

“Because then, when you see the way the ball rolls you know where you have to be for your approach and you know what kind of shot is the best shot to hit into certain approaches. Granted, I’ve played out here a bunch since the redo, but I really haven’t spent a lot of time learning the nuances, and I did that early last week.

“What’s happened for me is I spent so many hours as a kid that, when the course was redesigned, all that local knowledge went away,” Mickelson said.

“I haven’t come out here and spent a ton of time. It’s hard to get a tee time out here, and when you do, it’s a long round. So, I don’t spend a lot of time out here.

“I really made an effort here, having the last week off, to spend time and really relearn the greens. I spent a lot of hours out here on the greens last week to see if I can get that local knowledge again.”

The strength of South African golf is again on view with nine local players in the field, including the newest sensation Garrick Higgo, who won his maiden tournament on the PGA Tour last week.

Higgo, the 22-year-old left-hander from Stellenbosch, won the Palmetto Championship by one stroke to add to his three European Tour titles. He now has four wins in 29 starts on the world’s two biggest tours. Only Tiger Woods boasts a similar winning ratio, although the great American has done it for 23 years.

It’s a little unfair to expect Higgo to win a major so soon in his career, but he certainly has the skill and confidence to cause what would be an upset.

“South African golf couldn’t be in a better spot. Obviously, internally, I believe I’m the best. You’ve got to. But like you know, there are an unbelievable amount of good players back home,” Higgo said after winning last week.

Louis Oosthuizen, who was runner-up to Mickelson at the PGA Championship will be a contender while the likes of Christiaan Bezuidenhout and Branden Grace, both carrying solid form, can’t be overlooked.

The massively long Wilco Nienaber, like his close friend Higgo, will make his US Open debut. If he can keep the ball on the fairway consistently, he will make people take notice.

In another subplot, the ‘feud’ between 2020 US Open winner Bryson DeChambeau and four-time major-winner Brooks Koepka is one theme that will keep fans on high alert.

The two Americans, who should both feature in the Ryder Cup team later this year, have not hidden their mutual dislike of one another, but it’s unclear if the animosity is real or hype.

Koepka fans have chanted his name when DeChambeau is swinging and the two have exchanged barbs on social media. It’s quite tame compared to some real rivalries in sport, but it has added to the entertainment value.

“There’s a point where it’s great banter. I personally love it,” DeChambeau said in his pre-tournament media conference. “I hope on the weekend we can play against each other and compete. I think it would be fun and would be great for the game.”

Koepka’s opinion was that their spat was good for the profile of the game.

“Pretty much everything you look at online, it’s got this in the headline, or it’s up there as a big new story,” Koepka said.

That may be so, but stories like Mickelson and Higgo winning on opposite ends of their careers, are much better for the game. DM