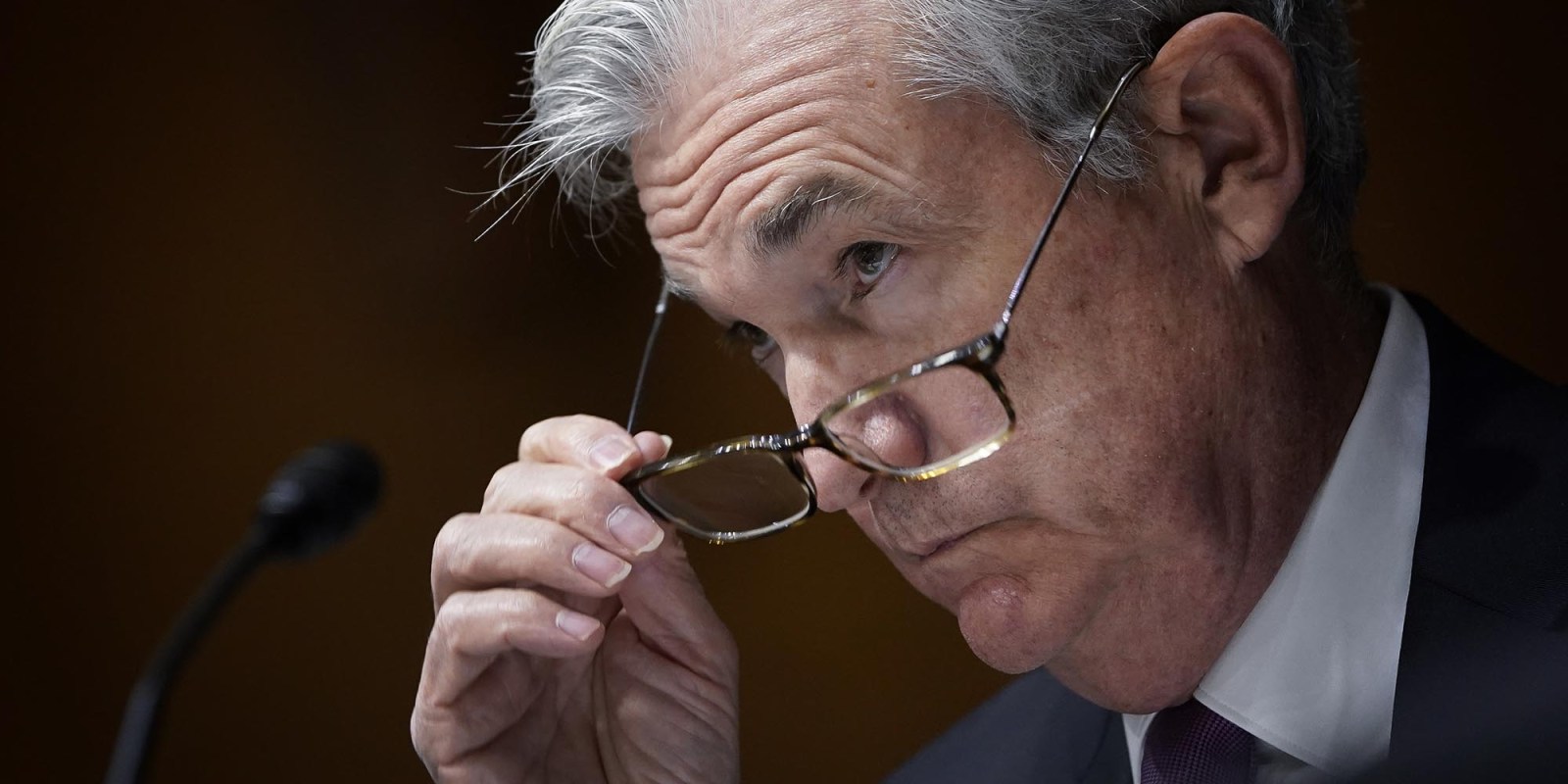 The US Fed’s much-awaited policy-setting meeting has been interpreted as more hawkish on inflation. But chair Jerome Powell cautions against taking any hard and fast views on the trajectory of inflation, which he still views as transitory.

The US Fed’s perceived more hawkish shift at this week’s interest rate-setting meeting sent the financial markets into a flurry on Thursday. Investors interpreted the step-up in inflation projections and earlier-than-expected rate hikes projected in the “dot plot” as confirmation that inflation may be more than transitory.

Of the 18 officials, 13 versus seven saw at least one rate hike in 2023, bringing forward the likelihood of rate increases by a year, and increased inflation forecasts to the end of 2023, with inflation expected to rise to 3.4% in 2021 versus March’s 2.4% forecast. In 2022, however, the increase was a marginal 10 basis points to 2.1% from 2% previously envisaged – in line with the Fed’s average inflation target range, which reflects the central bank’s ongoing view that current inflationary pressures will prove temporary.

Fed chair Jerome Powell warned against engaging in premature conversations about raising rates: “The dots are to be taken with a big grain of salt. They are not a good predictor.”

He added that this is an extraordinarily unusual time, saying: “We really don’t have a template of any experience of a situation like this. So we need to be humble in our ability to understand the data. It’s not a time to reach hard conclusions about the labour market, inflation or the path of policy. We need to see more data and need to be a little more patient.”

Fears of inflation-prompted tapering by the central banks continue to widen the schism between the inflation hawks, who expect inflation to become a real problem, and doves, who see the current ramp-ups in inflation to be transitory too.

It is not just the inflation views that have become unusually polarised. Perspectives on issues like health, the economy and the financial markets have also come to be poles apart, perhaps because the future is so uncertain and the only degree of control anyone has is standing steadfast in their views of the future.

However, as the pandemic has progressed, it has become increasingly clear that these are uncharted waters, with no previous period in history against which to compare. Moreover, actual economic outcomes over the past year have also proved it is impossible to extrapolate previous circumstances into the future with any degree of confidence.

Powell believes that price increases have been directly affected by the pandemic and the opening of economies. Prices, which have moved up quickly due to shortages and other factors, will come down again. He says the Fed has committed to providing “a lot of notice and transparency to allow people to adjust their expectations”, but notes that it is “a ways away” before we see further progress on monetary policy.

One of the most vocal inflation hawks ahead of the meeting was JP Morgan CEO Jamie Dimon, who said he is hoarding cash because he believes there is “a very good chance” that inflation is here to stay. Hedge fund manager Paul Tudor Jones told CNBC that the idea that inflation is transitory just doesn’t work for the way he sees the world and warns that the Fed risks losing its credibility should it hold firm on its current inflation views.

ING Economics falls firmly in the hawkish camp, expecting the first rate hike to come through in early 2023. However, it says the risks are skewed towards earlier action.

“In an environment where corporates have pricing power, workers are starting to push for higher wages and housing costs will be more pronounced and persistent, we are nowhere near as confident as the Fed that inflation will merely be transitory.”

However, those with pessimistic outlooks on inflation have also been accused of being prematurely hawkish – and, if the latest Bank of America Global Fund Manager survey is anything to go by, the majority view falls in favour of inflation proving transitory and Fed tapering expected to be peaceful.

Of the 224 fund managers surveyed, 72% said inflation is transitory, and 23% said it was permanent, as reflected in the graph below. However, the respondents did see inflation and a possible taper tantrum as the top two tail risks facing the financial markets, with asset bubbles, Covid-19 and a slowdown in China’s economy the other key risks foreseen. 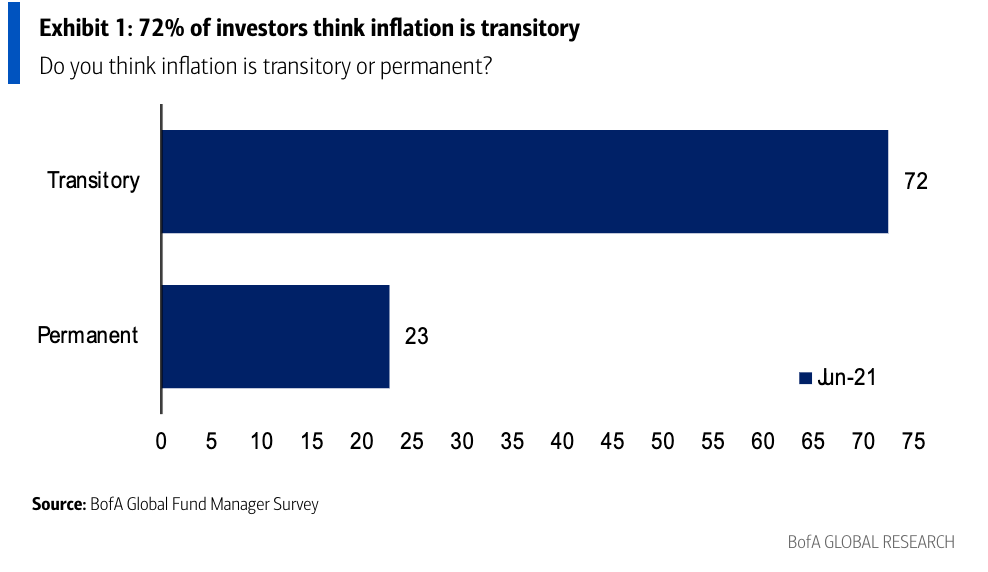 Well-known investment commentator Ed Yardeni also has a dovish perspective, acknowledging that there has been a sharp rise in the inflation rate but adding that he believes the economy can handle it. He sees the inflationary pressures as tied to the massive reopenings of the economy and the historical levels of liquidity awash in the global economy.

The results of the BoA survey, which were published before the meeting, also showed that 63% expect the Fed to signal when it is likely to taper in August/September, either at the Fed’s Jackson Hole meeting or the September FOMC meeting. 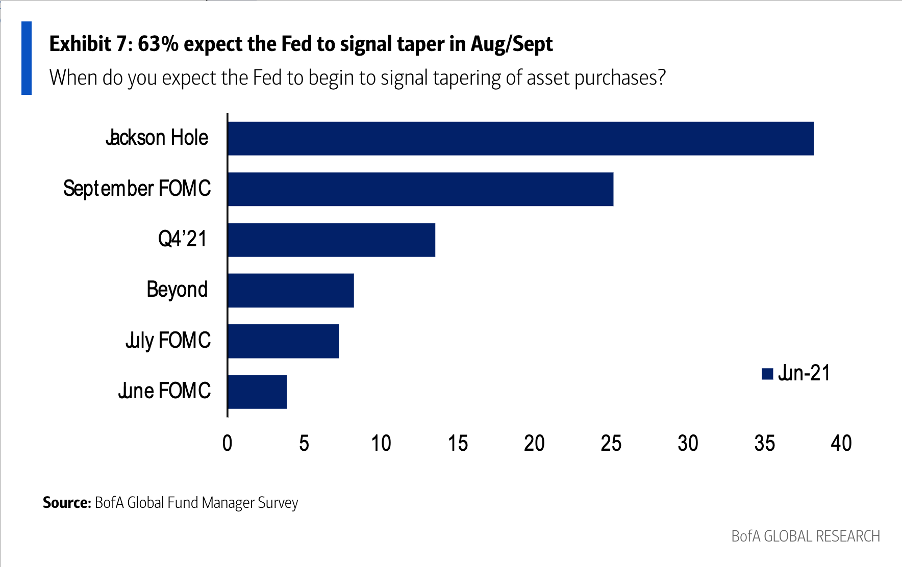 The anticipated timing reflected in the Global Fund Manager survey aligns with the outcomes of a Reuters poll of more than 100 economists, with some 60% anticipating a taper announcement during the third quarter, almost half of whom predicted it would come at Jackson Hole. The remaining economists expected the announcement to be made in the fourth quarter. 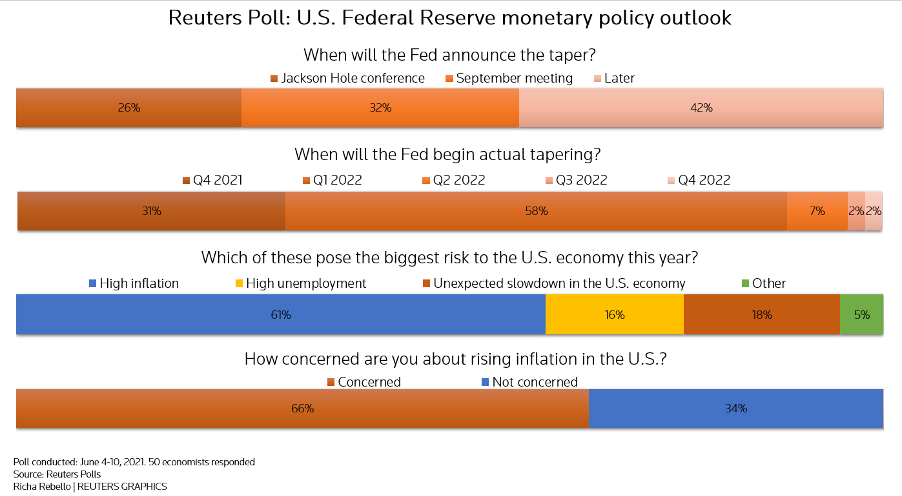 Powell did pave the way for discussions around tapering, saying, “You can think of this meeting as the talking-about-talking-about meeting.” But he did not commit to when the actual talking about beginning to unwind the central bank’s $120-billion monthly asset purchases would take place.

Until those conversations begin, it would be a fool’s errand to try and definitively predict what inflation is likely to do as the world tries to gain a firm post-pandemic economic footing. If the events of the past year have taught us anything, it’s that setbacks and surprises are more than likely to be par for the course. DM/BM