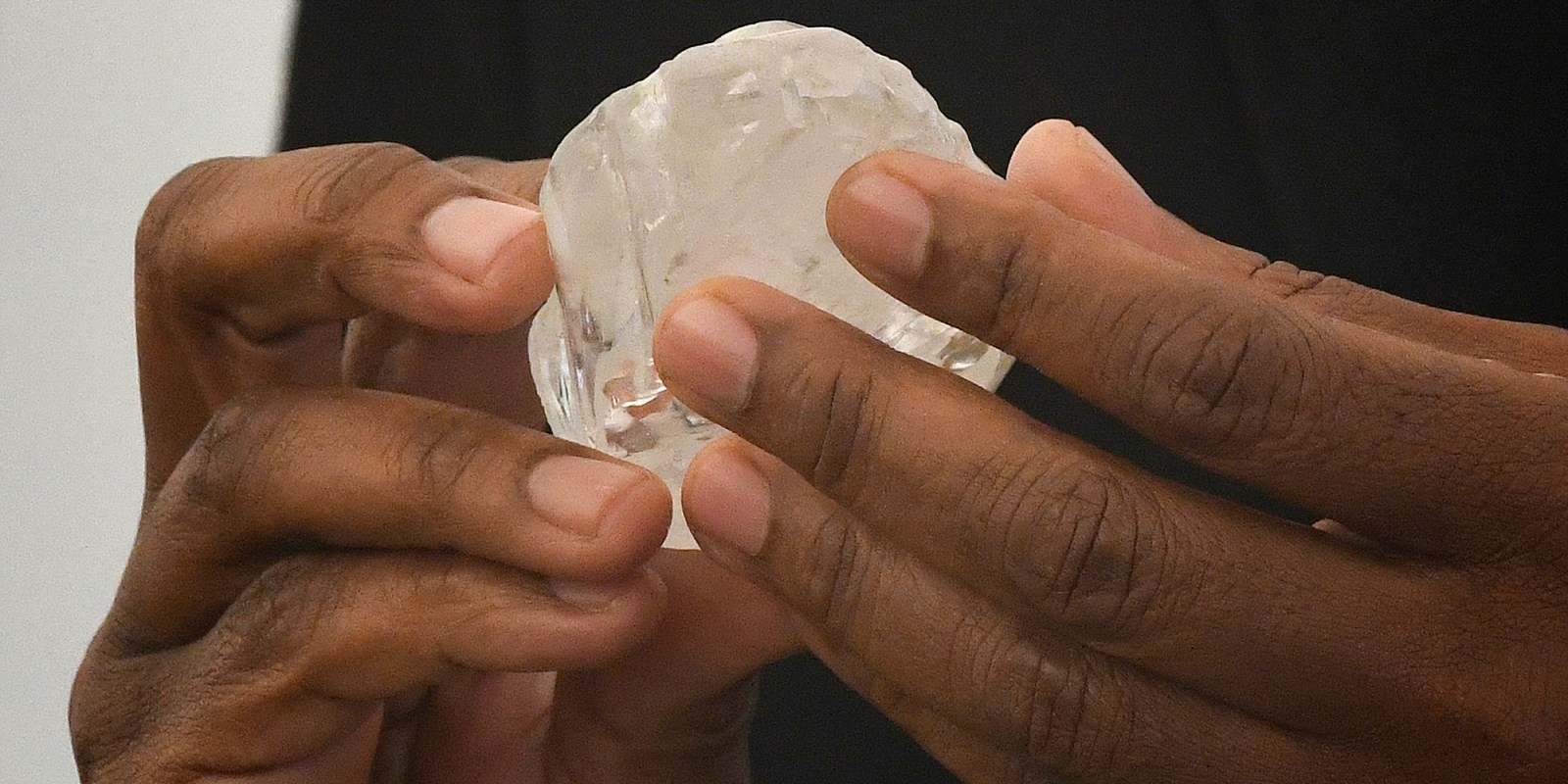 The 1,098 carat gem-quality diamond unearthed by the Botswana Government and De Beers joint venture mining company Debswana. The stone was found on 1 June 2021 and is believed to be the third largest of its kind, according to Debswana mines. (Photo: EPA-EFE / STR)

Debswana has discovered the world’s third-largest gem-quality diamond. Now all they have to do is find a buyer.

Finding a huge diamond is just dreamy — like winning the lottery, but crazier. Also, it’s trickier to sell huge diamonds than you might imagine.

De Beer’s subsidiary Debswana announced on Thursday that it had unearthed a 1,098 carat stone in Botswana at the beginning of June. It said, cautiously, that “preliminary analysis suggests the stone is the world’s third-largest gem-quality diamond ever, after the Cullinan diamond that was discovered in South Africa in 1905 and the Lesedi La Rona that was found in Botswana in 2015”.

According to Debswana’s acting managing director, Lynette Armstrong, it’s the largest diamond recovered by Debswana in its 50-year history. The diamond hasn’t been named yet.

The Lesedi La Rona was discovered by Canadian company Lucara Diamond Corp at its Karowe mine about 500km north of Gaborone. A year after the discovery, the stone was put up for auction by Sotheby’s in London. Bidding stopped at $61-million, failing to meet the house’s $70-million reserve.

The following year, 2017, it was bought by British jeweller Graff for $53-million. Two years later, Graff had cut it into one large emerald cut diamond — the Graff Lesedi La Rona, weighing 302.37 carats — and 66 smaller stones.

The Graff Lesedi La Rona is the largest, highest clarity, highest colour diamond ever graded, and the largest emerald cut diamond in the world.

It’s also still for sale. The stone is so expensive that the price hasn’t been mentioned. If you have to ask…

The world’s largest diamond, the Cullinan, was also not sold in its cut form — it was given away, famously after a suggestion by the then Transvaal Prime Minister Louis Botha. He proposed buying the diamond for King Edward VII as “a token of the loyalty and attachment of the people of the Transvaal to His Majesty’s throne and person”.

At that stage, two years after the stone was discovered, nobody had stepped up to buy it.

The diamond was essentially used as part of a diplomatic exercise since South Africa was building towards union and was warming the British up to grant the new union home rule. As a consequence, at the vote, all the representatives of the Boer republics voted in favour of giving the stone to Edward VII. All the representatives of the former British colonies voted against.

The plan seems to have worked. The Union of South Africa was formed and soon afterwards granted home rule.

The Transvaal Colony government bought the diamond on 17 October 1907 for £150,000, which, adjusted for pound-sterling inflation, is equivalent to $25-million in today’s money.

It produced nine major stones of 1,055.89 carats, including Cullinan 1, or what is now known as the Great Star of Africa — which is at the centre of the Sovereign’s sceptre — and Cullinan II, or the Second Star of Africa, which is part of the Regent’s crown.

But there is a problem. Huge strides have recently been made in diamond mining technology, including something called the “roll crusher”, which reduces the number of large stones that get damaged in the process of extraction. Diamonds are fabulously hard, but they do have facets, so they can be damaged if struck at a certain angle.

As a result of the innovation, greater numbers of very large stones have been coming on to the market.

Assuming the latest find can be sold, the discovery comes at a good time for Botswana and Debswana. Production at Debswana fell by 29% in 2020 to 16.6m carats, and sales fell by 30% to $2.1bn as the pandemic devastated production and demand.

Debswana hopes to increase output by a hefty 38% to pre-pandemic levels of 23 million carats in 2021 as jewellers reopen and the market normalises. Certainly, the sale of a great, thumping diamond would help. BM/DM