(Bloomberg) --California is getting an early taste of the summer that state officials have been dreading all year.

A heat wave spanning much of the western U.S. has brought triple-digit temperatures to parts of the state, sending power demand soaring and threatening blackouts once again. Trees, grass and brush left parched by a nearly rain-free winter are catching flame.

The drought stretching from West Texas to the California coast and north to the Canadian border are already putting power grids to the test as hydro generation dries up just as homes blast their air conditioners. The heat is expected to crest Thursday and Friday, with the temperature in Sacramento forecast to hit 110 degrees Fahrenheit (43 Celsius).

California’s power grid managers asked residents to cut their electricity use for Thursday evening as the output from solar power plants begins to fade. They are trying to avoid rolling blackouts, like those that struck California during an historic heatwave last August. The hope is that voluntary conservation should be able to offset a possible shortfall of about 300 megawatts.

“We’re here today with our first sense of potential supply shortfalls for tomorrow. At this point they’re looking rather modest, but we have to stay ahead of them,” Elliot Mainzer, chief executive officer of the California Independent System Operator, which runs most of the state’s grid, said late Wednesday. “We will be doing everything we can across the next 24 hours to keep the lights on.”

Meanwhile, traders betting that the intensifying heat will lead to electricity shortages across the western U.S. have driven a key spread between power prices in Arizona and those in the Los Angeles area to the widest it has ever been. Electricity regularly travels between Southern California, the Pacific Northwest and the Southwest, depending on which region needs it. But the blown-out spread reflects an increasingly uncomfortable truth: Climate change has brought about such extreme weather for all three regions that, at times, there isn’t enough power to go around. 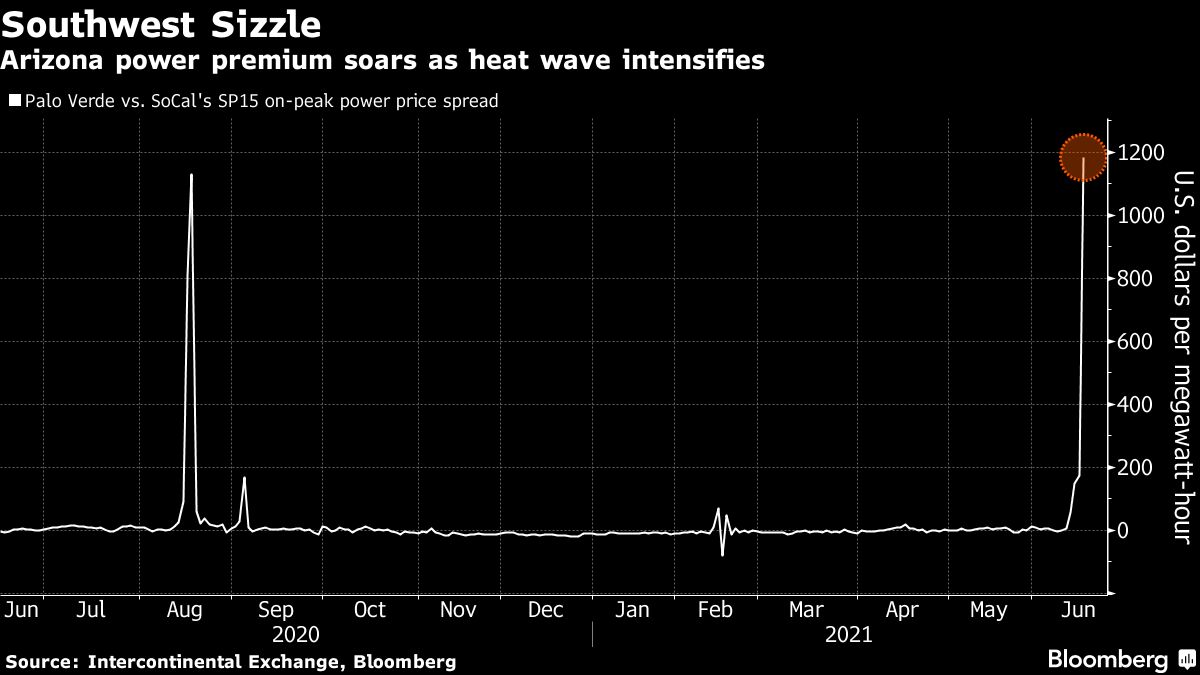 California officials have been bracing for a difficult season. The usual winter rains that the region depends on every year for moisture never came. And the ensuing drought couldn’t have come at a worse time for Governor Gavin Newsom, facing a likely recall election this fall, is trying to avoid a repeat of last year’s devastating fire season and the heat-triggered blackouts that briefly plunged more than a million Californians into the dark as they were stuck at home by the coronavirus pandemic.

Although California and Texas — America’s two most populous and prosperous states — have garnered most attention, the heat wave and the problems it highlights stretch across the western U.S. Outside of Texas, states there have grown dependent on importing power from one another when demand is high, but that has become increasingly difficult as extreme temperatures blanket the entire region.

“That west-wide heating event can really stress the grid across the west, and that’s when things get really tight,” CAISO’s Mainzer said.

Excessive heat warnings currently cover most of California and spread through parts of Nevada, Arizona, Utah and Colorado. Temperatures will be dangerously hot, and residents are advised to retreat to air conditioning if possible, check on neighbors, and never leave anyone unattended in a car.

“Thursday and Friday are going to be the hottest days generally, around 105 to 110,” said Karleisa Rogacheski, a weather service meteorologist in Sacramento. While the heat will dull by a few degrees over the weekend, there won’t be any relief until next week. “Tuesday being the big reprieve. It is a little bit of a wait, but eventually we will get back to normal for this time of year.” 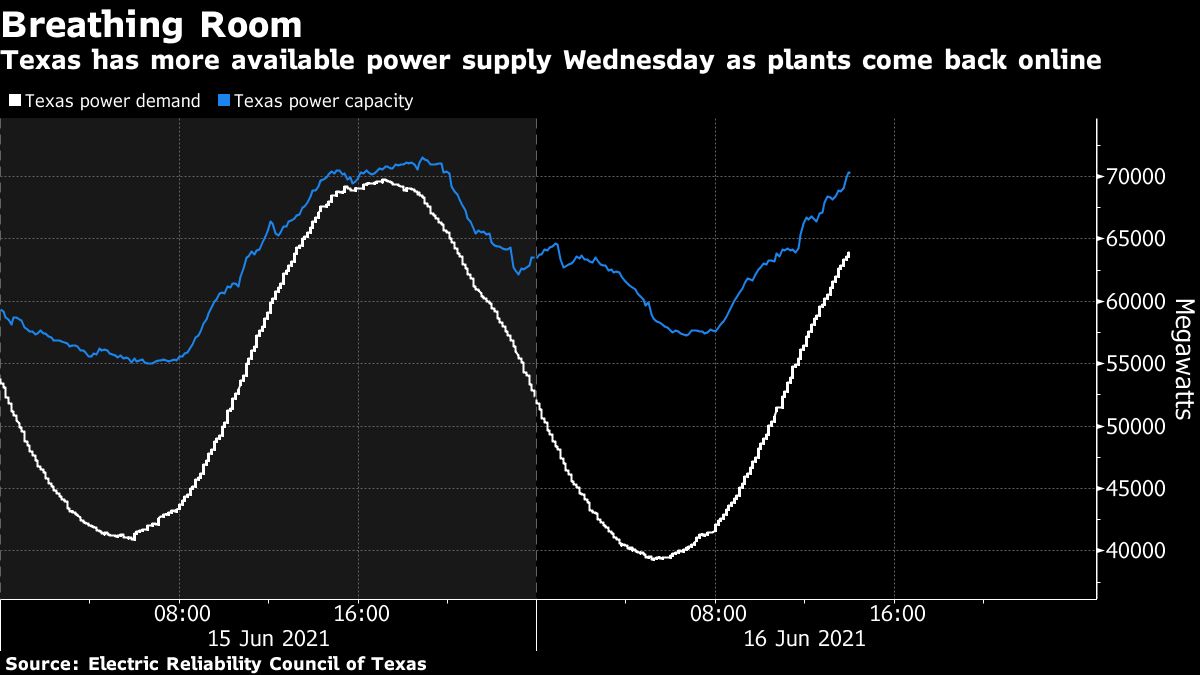 Texas supplies tightened in recent days after plants with as much as 12.2 gigawatts of generating capacity, enough to run about 2.4 million homes, unexpectedly shut down for repairs. That fell to 10.6 gigawatts Tuesday. About two-thirds of those out of service were natural gas, coal and nuclear plants. The rest were wind and solar, the grid operator said.

The system had 3.8 gigawatts of power reserves as of 5 p.m. local time on Wednesday. Managers of the Texas electrical grid said they would call the first stage of a grid emergency should reserves fall below 2.3 gigawatts and would start rolling blackouts if reserves fell below 1 gigawatt.

One thing that might cool temperatures along the Texas coast is rain from a potential tropical system taking shape in the southern Gulf of Mexico. “Maybe by Monday a cold front will push down from the north,” said Oravec. “Until then it’s going to be hot.”

But it’s still early to say what the summer will bring.

“We’re optimistic that if we stay really focused and people lean in with us, we can minimize the probability of rotating outages,” Mainzer said.

–With assistance from Naureen S. Malik and Brian K. Sullivan.