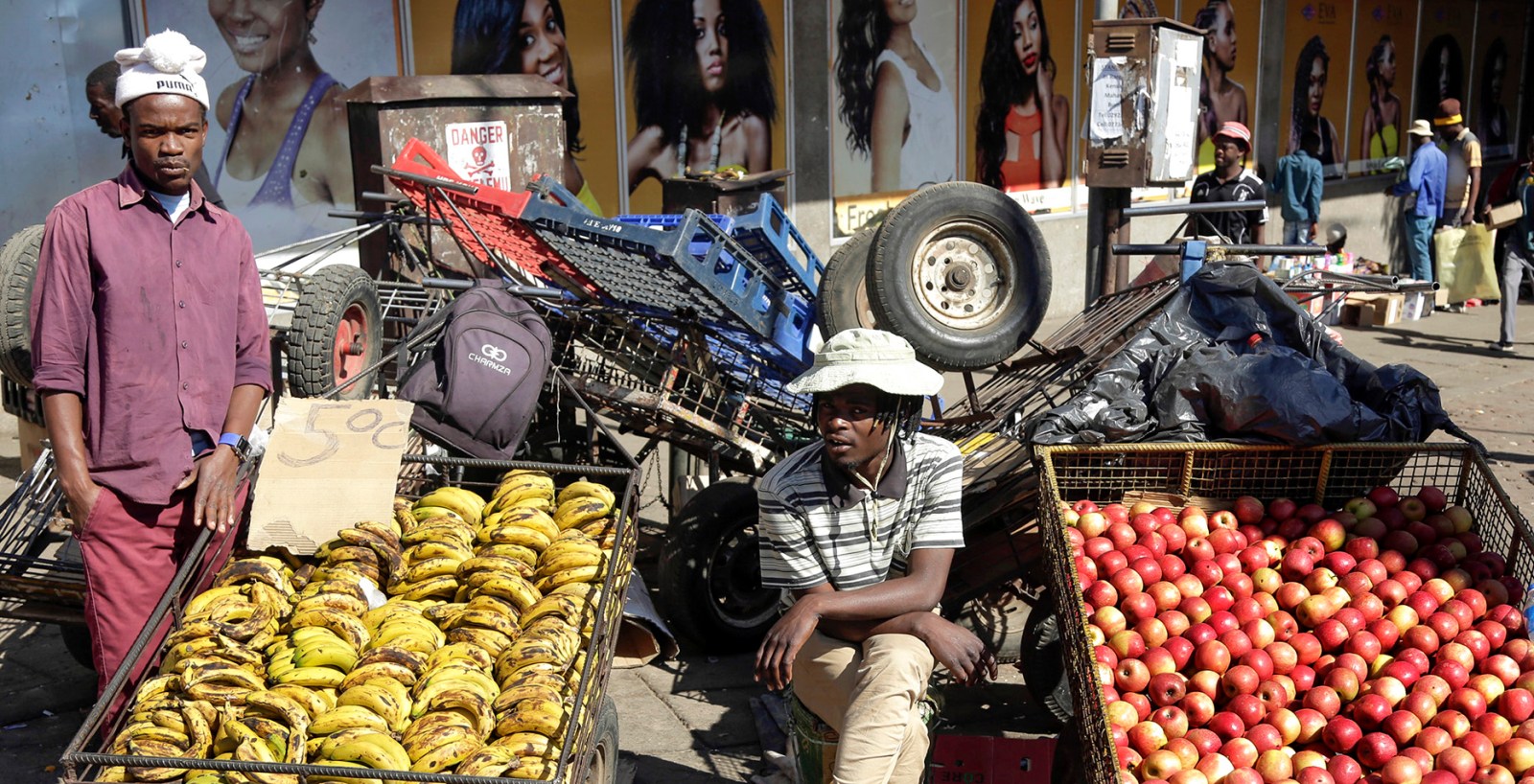 Vendors sell fruit at a market in Bulawayo, Zimbabwe, more than 400km from the capital Harare. (Photo: EPA-EFE / Aaron Ufumeli)

Human rights activists and critics of the government in Zimbabwe are unlikely to benefit from any state-controlled resources. Zimbabweans know: If they want to get ahead economically in the country, they need to toe the Zanu-PF party line. Or else.

Political and social justice activists are viewed as “enemies of the state”, which is why they are forced to buy or rent property from those in the government’s good graces.

“Planting… where it really starts… our numbers are mind-boggling. #150K

Attached to the tweet were pictures of rows of newly planted tomatoes on his farm in Nyamandhlovu. Many people commented on the tweet, sharing advice and compliments on the impressive large-scale operation. That tweet was posted at 8.10am.

By 2.56pm, Malunga was back on Twitter with shocking news, which in hindsight, should have been expected:

“Today we received a call from Mr Dodzi at the Lands Office in Bulawayo to tell us that the Zim Govt has acquired our privately owned farm & tomorrow they are coming to peg it & give it to people they have allocated it to. This isn’t about land reform & we will fight it in every way.”

“The farm is wholly privately owned by 3 black individuals and we only got to see the Gazette and acquisition notice issued on 18 December for the first time today after the Lands Officer gave us the number and told us to go to government printers.”

Attached to the tweet was a picture showing that the government of Zimbabwe had gazetted the farm Malunga co-owns with two other black Zimbabweans: Zephaniah Dlamini, the director of the Applied Genetics Testing Centre at Bulawayo’s National University of Science and Technology, and Charles Moyo, a Bulawayo businessman.

Just three weeks ago, the state-run Chronicle newspaper ran a glowing feature story on Dlamini, praising him for his successful farming operation.

In the story, the reporter also wrote about how Dlamini led Bulawayo’s Covid-19 tests in April 2020, saying: “Unbeknown to many Mr Dhlamini [49] is not just a laboratory scientist, who is always wearing white lab coats. He is an avid farmer getting dirty on the land and is making money from the soil.

“He is part of a three-man farming venture operating under the name Esidakeni Farm in Umguza on the outskirts of Bulawayo and employs 45 full-time workers.”

If the government is aware that the farm is owned by black Zimbabweans, in line with the land reform programme, why then is it repossessing the farm? Seeing as the land is in use, as attested to by the Chronicle, what has made the farm eligible for repossession?

One Twitter user by the name Beki Ndhlovu posted this in response to the farm acquisition:

“This country is full of kak. Zeph Dlamini led the Covid fight in Byo, moved his NUST team to Mpilo Hospital, caught and survived COVID in the process. He was paid a measly allowance for his efforts. Namhla babathela iplazi. One day is one day.”

To many who understand Zanu-PF politics, it is clear that the repossession is aimed at Siphosami Malunga. Brian Tamuka Kagoro posted this tweet in response to the repossession:

It is no secret that the government of Zimbabwe considers Malunga an enemy of the state. The government has several times expressed its displeasure with Malunga’s advocacy and with the Open Society Foundation and its founder, George Soros.

In 2018, the army held a press conference warning Malunga about “peddling falsehoods about the role of the army in the elections”, after he had spoken out about the army, electoral violence and intimidation.

On 30 January 2020, The Patriot Newspaper ran an article titled “Soros funds new regime change tactic”, saying: “This is not the first time Soros has used education as a regime change weapon, especially for Zimbabwe.”

The story was about Soros’ pledge to give $1-billion to the Open Society University Network project.

The story also referred to “Soros’ holding hand”, Malunga: “When it comes to the Open Society for Southern Africa’s agenda, Soros has decided to adopt a no-holds-barred approach to the regime change politics in Zimbabwe. The director of this effort is a Zimbabwean called Siphosami Malunga.”

A ghost account suspected to be run by one of the numerous state-sponsored social media trolls had this to say:

“Not defending the state but stating the truth. Malunga cannot expect to benefit from the same gvt. which he denigrates. As a son of a National Hero and beneficiary of state resources, he must know better. As someone who hails from uMguza, I know everything about that Farm.”

The account refers to Malunga being the son of the late Sydney Malunga, who was persecuted by Zanu-PF at first during the Gukurahundi genocide and throughout his time as a parliamentarian who stood up to Robert Mugabe and his cabinet. Sydney Malunga died in a suspicious car crash in 1994.

The tweet exposes the government’s motivation for seizing the farm: “Malunga cannot expect to benefit from the same gvt. which he denigrates.”

This acquisition is part of a systematic and widespread attack by the Zimbabwean government on dissidents who are abducted, disappeared, arrested and persecuted for speaking out against injustices.

As we speak, Makomborero Haruzivishe, an opposition activist, has been in jail since February after being sentenced to 14 months in jail on trumped-up charges.

Seeing as Malunga is based in South Africa and cannot be arrested by Zimbabwe, it is clear the authorities have decided to cripple him economically instead. DM/MC