‘South Africa has an opportunity to reset its Israel-Palestine bias’ 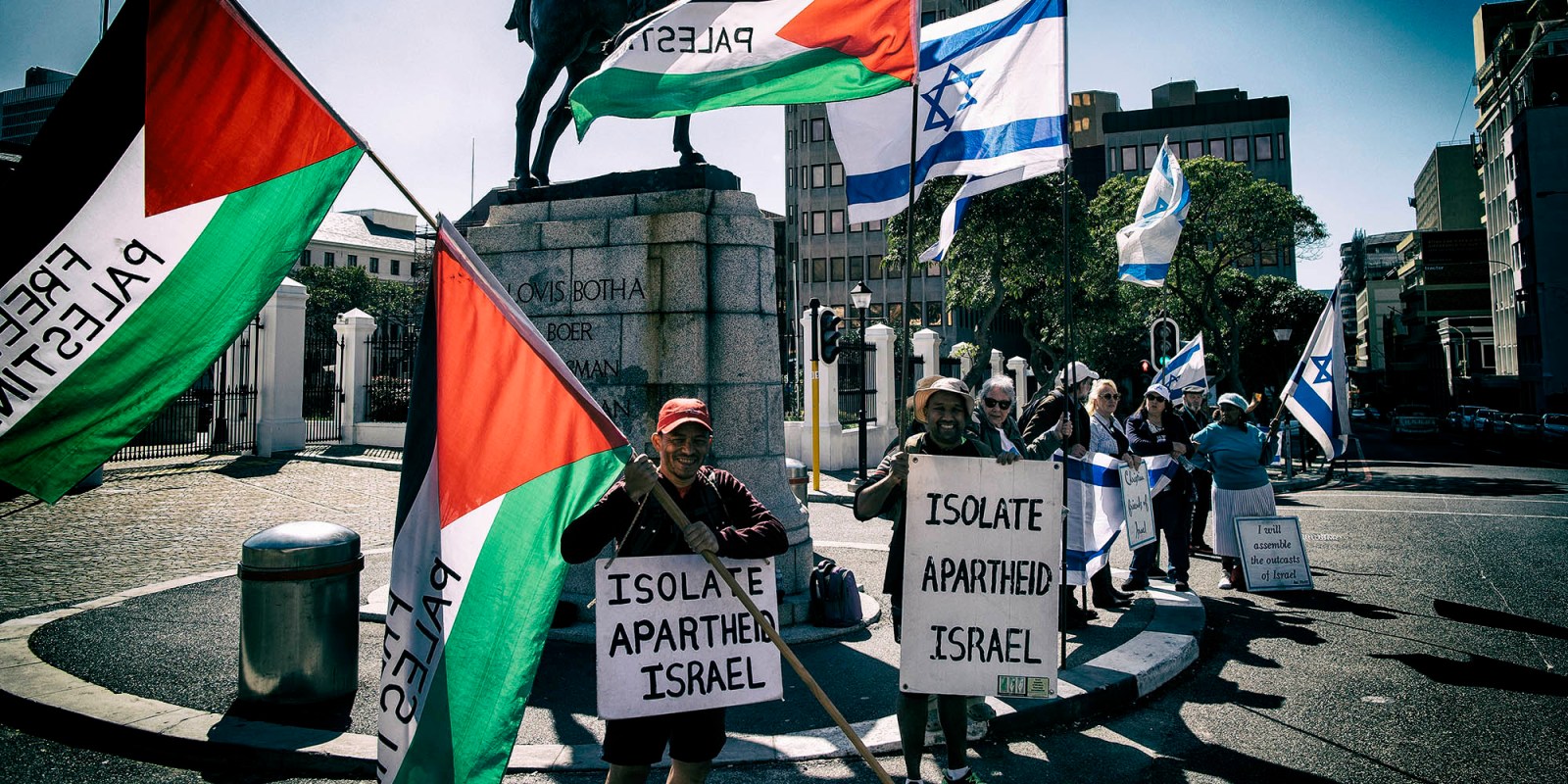 Two South African groups – one pro Palestine and the other pro Israel – protest outside of the Parliament in 2018. (Photo: EPA-EFE/NIC BOTHMA)

When it comes to Israel, there has been no space for dialogue or for balanced discussion in public spaces in South Africa. With a fragile new government formed in Israel this week, South Africa has an opportunity to reset and re-establish its influence, connections and relationships in the region.

Arthur Lenk is a former ambassador of Israel to South Africa. He studied law at the Hebrew University of Jerusalem (LL.B. and LL.M degrees) and is a member of the bar in Israel and New York.

Just this week, after two years of political stalemate and three indecisive elections, a new, fragile Israeli government has been formed. Among the full partners in this unity coalition with a wide representation across Israel’s democracy is the Ra’am Islamist party. The government also seems to have quiet support of a number of additional Arab parties. It has an Arab minister for regional cooperation and a Druze minister in the finance ministry. Arab parliamentarians head at least two committees in the Knesset and there is a renewed awareness and appreciation of the need to improve intercommunal economic, social and security issues within Israel.

The change of government and departure of Prime Minister Benjamin Netanyahu after 12 years offers South Africa an opportunity to reset its relationship with Israel. It should quickly nominate and send an ambassador to its embassy in Israel and establish a constructive dialogue with the new government after too many years of silence.

Since leaving South Africa four years ago, I have closely followed events through ties with friends, business connections and from reading this publication regularly. Along with friends of South Africa around the globe, I empathise deeply with the range of local challenges, from electricity and water shortages, to extreme difficulties combating the pandemic and too many secret envelopes and missed appearances at judicial commissions.

At the same time, one issue has remained constant – the “success” of a small, loud anti-Israel lobby in preventing South Africa from actually having any impact on Israel-Palestine. It is quite rare for any Israeli voice to be heard here, a great loss for a place that values exchange of views and seeks conflict resolution.

At the same time, the word “apartheid” seems to be having a political renaissance in 2021. However, it is apparent that the usage seems to have migrated from a legal/historical definition of a specific terrible event in South Africa to an epithet meaning unfair or cruel. Some examples include “vaccine apartheid” and “gender apartheid” – to describe the unfairness of global distribution of Covid-19 vaccines and patriarchal policies against equality for women in countries like Saudi Arabia.

Paradoxically, actual apartheid-like situations never seem to use this term. Apartheid does exist in 2021, in legislation in nearly every Islamic state limiting rights of non-Muslims and women, or in China’s policies regarding migrant workers and the Uyghur minority community. No one dares to speak out.

The word is mostly used these days (and most often solely against Israel) for shock and marketing value, not because anyone who cares to be true to the actual history really believes it to be true. Using the word is a PR strategy by NGOs and activists who want to change the debate from one of security, compromise and coexistence to radically altering the map in the Levant. Jews carefully stand to object to abusing the words “Shoah” and “Holocaust” from a deep awareness that overuse weakens. I don’t understand why many South Africans don’t do the same for “apartheid”.

In reality, as part of the exhausting Israel-Palestine conflict, human rights has long been used as a weapon in the war of public opinion. Does shaming work? Do these human rights campaigns incentivise Palestinians to renew negotiations or compromise? And most importantly, is the goal to improve the situation or merely to delegitimise Israel?

Abusing terms like colonialism, apartheid, ethnic cleansing and anti-Zionism is meant to erase Israel. A perfect example has been the evident anti-Semitism in protests in Golders Green in London, in Brooklyn, New York and the Glenhazel neighbourhood of Johannesburg, which all focused on local Jewish communities and not the local Israeli embassies or consulates.

There is a huge difference between critiquing policies and calling for destruction of the world’s one Jewish state. One might certainly ask where are pro-Palestinian and human rights activists about Palestinian rights in Lebanon, Syria, the Gulf or even regarding actions of the Palestinian Authority in the West Bank and Hamas in Gaza.

Where are the pro-Palestinian outrages about Hamas rockets that fell on Gaza or are shot from homes or schools (much less the targeting of Israeli civilians)? Silence about lack of rights of LGBTQ communities, women, Christians and the systematic education for hate in the West Bank and Gaza. After recent statements by the UN’s Palestinian refugee agency (UNRWA) about tunnels under schools and the careful actions of Israeli targeting of combatants, its commissioner was forced to flee Gaza. Maybe the “friends of Palestine” are not quite pro-Palestinian but anti-Israeli.

No organisation is left out of this assault on stigmatising Israel. Bodies such as the UN Human Rights Council have systemic, built-in anti-Israel biases. A wide range abuse and damage is permitted to international organisations including the World Health Organisation, UNESCO and, most absurdly, the International Criminal Court which seems to invent rules again and again so it can lobby (er, adjudicate) for Palestine.

South Africa had even gone further than nearly any other country in its one-sided view and support for the Palestinians and criticism of Israel. On the ground there has been no space for dialogue, for views that discuss Israel in a balanced manner in public spaces or offer different perspectives.

But by doing so, South Africa had no impact other than to hurt its own interests. It made itself irrelevant to facilitate any positive developments between Israel and Palestine. The lack of a South African ambassador in Israel has diminished its influence, connections and relationships in the region. Statements some officials have been so ludicrous they are mostly ignored and even when noticed, further lessen South African credibility. The so-called Human Rights groups in South Africa have no human rights agenda at all other than bashing Israel and South African Jewry.

Today there is an opportunity for a reset. South Africa should join governments around the world and offer warm wishes to the new government and quickly nominate a senior representative to Israel who can speak and listen, share South Africa’s stories and promote trade and tourism. He or she can learn from the things that Israel gets right – vaccinating its public, world-class innovation, respecting LGBTQ communities – and offer Pretoria’s perspectives on issues including a peace process with the Palestinians and insights into Africa.

Much of the international community, from the Emirates to Morocco and India to Sudan, has deepened relations with Israel in recent years. The news this week offers South Africa an excellent opportunity to promote issues that are important to its people and it should grab it with two hands.  DM