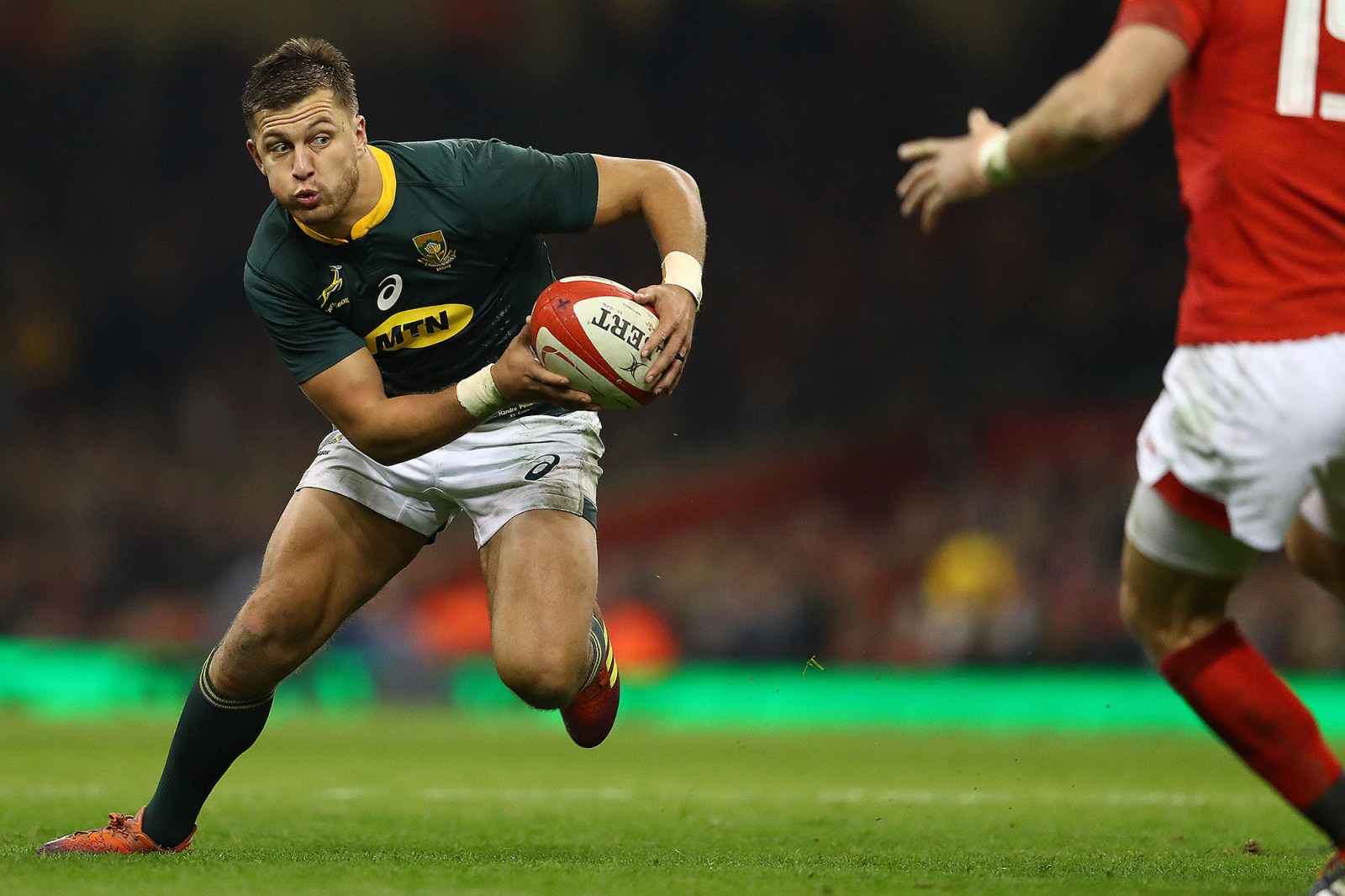 The pandemic has robbed the Springboks of the chance to develop experience in depth.

A Springbok flyhalf contingent that includes Handré Pollard and Elton Jantjies, as well as the accomplished Morné Steyn, is a formidable one on paper, but the latter two pivots have enjoyed little to no game time at Test level in the past few years.

Coaches Rassie Erasmus and Jacques Nienaber will hope Pollard remains fit and available for the duration of the series against the Lions. If the man who played such an influential role in winning the Rugby World Cup 2019 breaks down, the Boks may have to alter their tactical course and back two very different options in Jantjies and Steyn.

Some players are irreplaceable. Duane Vermeulen, Man of the Match in the 2019 World Cup final and the 2020 SA Rugby Player of the Year, falls into this category.

The Bulls have confirmed that the inspirational No 8 will be sidelined for the next six weeks due to an ankle injury.

The upshot is that Vermeulen may not be back for the first Test against the Lions on 24 July.

There’s a lot of talent in the South African loose-forward group, and Marcell Coetzee could make a return to the Bok setup. But there is no like-for-like replacement for Vermeulen in terms of skill set and experience.

Erasmus and Nienaber may be without one of their key players for an opening Test that sets the tone for the rest of a series. Six weeks out, and they may already be considering changes to their game plan.

Pollard is expected to fulfil a similar role over the next two months. The fact that he is coming back to South Africa after boosting French side Montpellier to a European Challenge Cup title is a big plus for the Boks.

It’s no fault of the coaches that they find they have only one outstanding flyhalf in the mix ahead of the Lions series.

In an ideal world, the Boks would have experimented with alternative options in the two Tests against Scotland as well as the one-off against Georgia, matches initially scheduled for July 2020. They would have used the subsequent Rugby Championship and end-of-year tour fixtures to expose new players and combinations to the inimitable rigours of top-flight Test rugby.

The global pandemic, of course, laid those plans to waste, and forced the world champions to spend the entire 2020 season in the international wilderness.

There’s no time for experimentation. Nienaber will have to field a first-choice team as the Boks build towards the short-term yet all-important goal of beating the Lions.

Neither Erasmus nor Nienaber could have foreseen that the selection policy at the 2019 World Cup would leave such an important squad member – the second-choice flyhalf in Jantjies – so short on game time.

It’s important that Pollard receives a decent opportunity to gel with the team in the preliminary bouts with Georgia next month, but the Bok management faces another pressing task in getting Jantjies up to speed.

Erasmus was honest with Pollard and Jantjies about the pecking order in the 2018 and 2019 seasons. He took the two specialists to the World Cup in Japan, and listed Frans Steyn and subsequently Damian Willemse as further flyhalf options.

When Erasmus included Steyn on a six-two bench ahead of Jantjies throughout the World Cup playoffs, the player accepted the decision for the sake of the team.

Jantjies started just two games at the 2019 World Cup – against Namibia and Canada. By then the split-squad system was well established. In the preceding Rugby Championship, Jantjies starred for the B side in a bonus-point win against Australia in Johannesburg.

While Jantjies and company were thrashing the Wallabies at Ellis Park, a clutch of first-choice players were already in New Zealand preparing for the more challenging task of facing the All Blacks.

The split-squad strategy paid dividends, as South Africa went on to draw with the All Blacks in Wellington and take control at the top of the Rugby Championship log. Two weeks later, they beat the Pumas in Argentina to secure their first big title in 10 years. That victory provided them with confidence and momentum ahead of the World Cup.

Only two flyhalves have been backed in a starting capacity since Erasmus and Nienaber returned to South Africa in 2018. Pollard played the bulk of the matches over the 2018 and 2019 seasons, and was entrusted with the responsibility to start against big opponents such as the All Blacks and England in the matches that mattered most.

Jantjies, on the other hand, started seven of the 26 games in that two-year period.

It could be argued that Erasmus started Jantjies only once in the first-choice side – when the Boks played Australia in Brisbane in 2018.

Pollard was favoured far more than Jantjies over that two-year-period, but not in every single match.

Furthermore, Erasmus experimented a great deal in other departments, handing more than 20 players their first caps in the lead-up to the 2019 World Cup.

Unfortunately, plans to give Jantjies – and possibly other flyhalves – more game time in 2020 were scuppered by the pandemic. Erasmus and Nienaber won’t know how much Jantjies has improved until he plays for the Boks against Georgia next month, or even for the SA A team against the Lions on 14 July.

The Bok coaches won’t have the opportunity to address this important long-term issue until after the Lions series is over.

This is why they’ve banked on an experienced and reliable third-choice flyhalf in their current 46-man squad.

If Pollard and Jantjies break down, the coaches need someone at No 10 who understands the pressure of a big occasion and has the means to respond.

Steyn could be the solution

Morné Steyn has been outstanding for the Bulls since returning to South Africa in early 2020. The 66-Test cap veteran recently guided the Pretoria-based franchise to Super Rugby Unlocked and Currie Cup titles.

Next month, Steyn may rack up another rare milestone and face the Lions for the second time in his career. Back in 2009, he came off the Bok bench to slot the series-clinching penalty at Loftus Versfeld against Paul O’Connell’s Lions.

Pollard believes that Steyn will add value as a mentor to himself and Jantjies over the next few months. Many in the know, including former Bok coach Heyneke Meyer, feel that Steyn – now 36 – is still fit and sharp enough to start for South Africa if needed.

These are significant endorsements, and Steyn’s recent form in the domestic tournaments certainly suggests that he has more to give his country.

There’s no getting around the fact that Steyn hasn’t played Test rugby since 2016, though. He will need game time in the upcoming games against Georgia and possibly for the SA A team against the Lions.

Erasmus and Nienaber, of course, shouldn’t bank on a best-case scenario.

They have to prepare Pollard for battle, but they also have to ensure that Jantjies and Steyn receive sufficient game time before the Lions series.

It’s yet another juggling act that will put the duo’s reputation as problem-solvers to the test. DM168