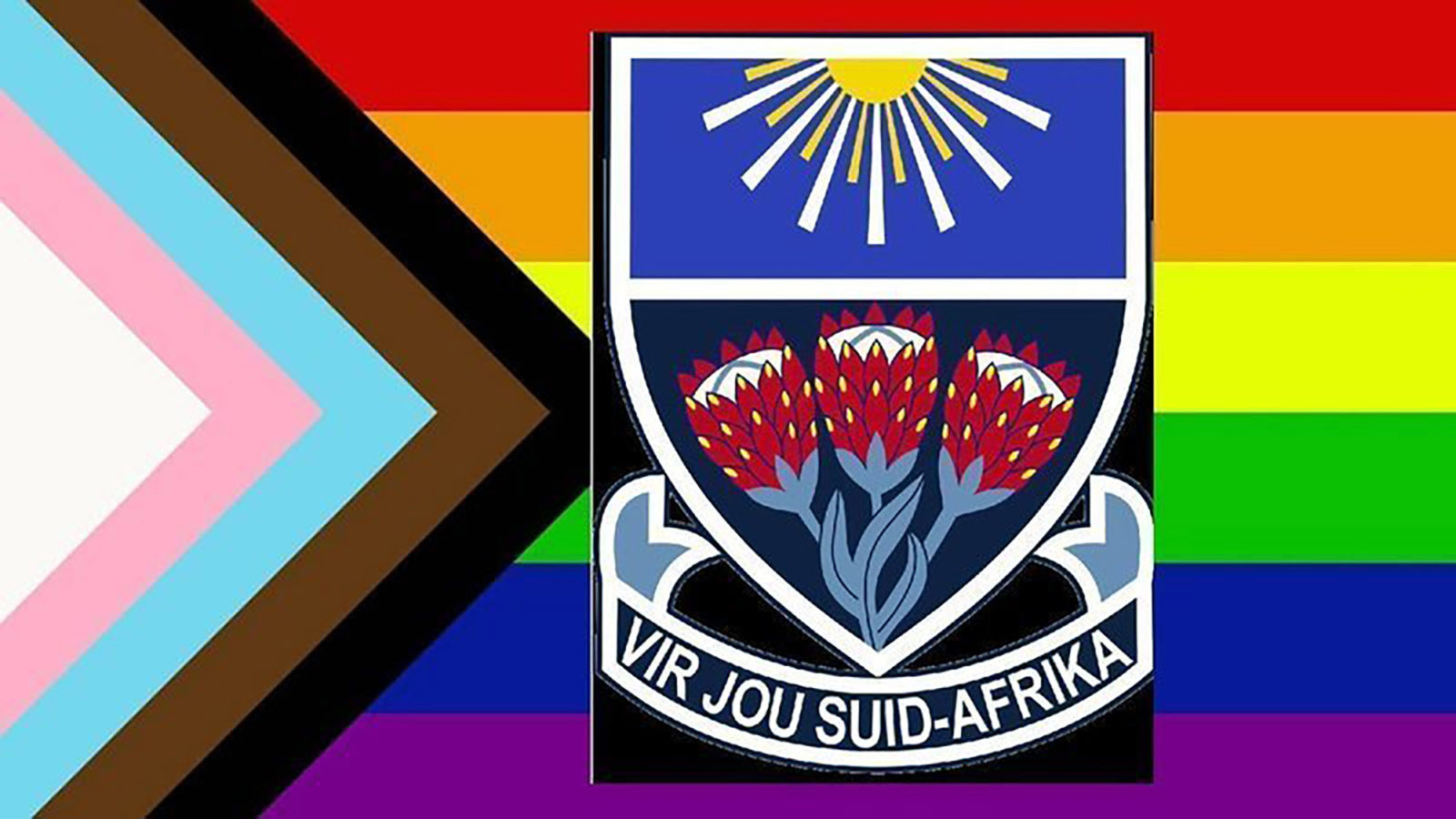 After a group of learners gathered to celebrate Pride Month during break at DF Malan High School in Cape Town on Monday, 7 June, they were targeted by pupils who allegedly harassed and hurled homophobic slurs at them. Outrage grew after the school argued that pride celebrations were forbidden as they ‘polarise’ students.

Now, the South African Human Rights Commission has stepped in to investigate allegations of homophobia following the incident, saying it would call an urgent meeting with the principal and the Western Cape Department of Education to discuss “these allegations and determine a way forward that is in the best interests of the learners of the school”.

Daily Maverick has established that the principal, Sias Conradie, spoke to each grade separately on 8 June about the incident. Daily Maverick has listened to a recording of his speech to the Grade 9s. Conradie said there were two sides to the incident: the students who had celebrated Pride Month after the school had forbidden it, and the students who had used abusive language against those celebrating.

He said pride celebrations “polarise” students and are not inclusive. He labelled the use of the pride flag as “commentary” and “propaganda”, and said pupils should not resort to hate speech but rather follow the proper channels if they have grievances.

Conradie asked pupils to come forward with the names of the pupils who had used the abusive language and promised to take action against them.

A matric pupil who was part of the group that was targeted spoke to Daily Maverick on condition of anonymity because she fears being targeted again. She was unaware of the rules that forbade them from gathering for pride and was certain many others were also not aware. They didn’t consider it a protest or sit-in, but a chance for people to celebrate Pride Month. Conradie, she claimed, had said that because there was a flag and they had sat in a circle, it was a protest and thus banned.

“We did not expect it at all, and we consider it to be a form of oppression to forbid children to celebrate it,” she said. She was surprised since the school “regularly hammers on the fact that [it] is inclusive to everyone”.

Conradie had said they “are not allowed to push [their] beliefs down each other’s throats”. The pupil said they had explained that this is oppression as there is a club for Christians to gather each Wednesday during break. “In the end that is our whole problem – other people are allowed to express their opinions at the school and celebrate, just not pride.”

She added that a pupil who helped lead the celebration was later added to a WhatsApp group with the name “fok die fags” (“f*** the fags”).

After sending queries to the school and principal, Daily Maverick received a press statement from the school’s governing body, which reiterated Conradie’s comments on pride not being celebrated because it could lead to “tension and division”. The decision had been made by Conradie and the governing body.

The statement said the school “regrets the incident” and that it would make further plans to address discrimination and intolerance. It added that the school is investigating the students who transgressed the code of conduct and that their psychological support office is supporting those who were traumatised by the incident.

Western Cape Education MEC Debbie Schäfer released a statement on 10 June that she was “deeply concerned” about the treatment of the queer students and promised that her department would work with the school to avoid such future incidents.

Parents of the school said on social media that they thought the incident was “unconstitutional bullying behaviour” and “unacceptable”.

Another pupil told Daily Maverick the group that had sat on the field was targeted a lot. Phrases such as “burn in hell”, “don’t be gay” and “sin” were shouted at them. A pupil had posted phrases like these, and saying such things were also written on notes in their lockers.

Alumni of the school said they were “disappointed but not surprised” by the incident.

Similar trends have arisen at other schools, as illustrated by comments on the Instagram stories of the anti-gender-based violence (GBV) movement at Stellenbosch University. Many students and ex-students spoke about how they were subjected to slurs regularly. Many said school staff use Christianity as an excuse for homophobia.

Activism regarding queerphobia at schools

A petition has been created calling on the school to publicly apologise for silencing its queer community, discipline the queerphobic pupils and hold educational seminars for pupils and staff to promote inclusion at at school. It has more than 13,000 signatures.

These demands have been repeated by many activist movements on social media. Stellenbosch University’s anti-GBV movement had been left “heartbroken” by the incident. They preferred to not comment individually, but as a collective. “It should be a time to celebrate that queer youth have power and can create spaces where we can challenge ideas of patriarchy and violence against queer bodies and make safe spaces for ourselves,” they said, referring to Pride Month and upcoming Youth Day. “We were so proud to see that people were taking up space,” they said of the gathering.

They expressed their disappointment and disgust at the lack of accountability and the silencing of queer students. They were unhappy that the pupils gathering for pride were being equated with the queerphobic comments that pupils faced, which, they pointed out, were against the Constitution. While queerphobia was prevalent in all schools, they feared that “the schools that have the least amount of power and voice are going through the biggest of atrocities and we will probably never hear their stories”. DM