Red alert: Southern Africa in the crosswinds of a third wave of rising infections and world-beating mortality 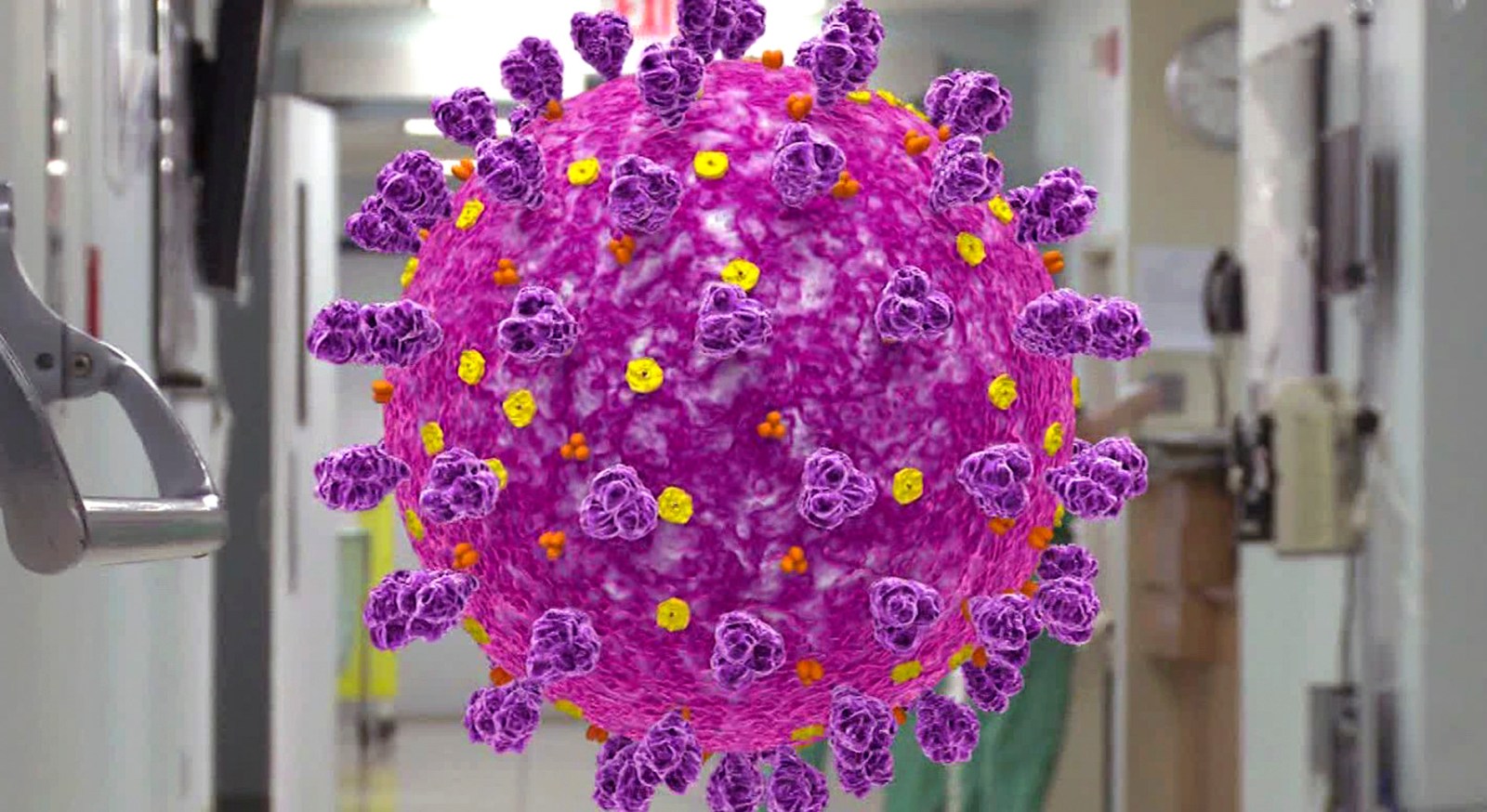 According to the World Health Organisation (WHO), at least a dozen countries have so far confirmed the presence of a variant, now named the Delta variant, that was first detected in India late last year. (Photo: khou.com/Wikipedia)

A little more than a year after the first cases were confirmed in Africa, a third wave of Covid-19 infections struck the continent. In the absence of massive vaccine roll-out and on top of failing health systems, the consequences will be devastating.

The new wave of Covid-19 is thought to be partly associated with the emergence of variants that are more transmissible.

According to the World Health Organization (WHO), at least a dozen countries have so far confirmed the presence of a variant — now named the Delta variant — that was first detected in India late last year. These include Angola, Botswana, Democratic Republic of the Congo, Namibia, South Africa, Zambia and Zimbabwe.

This third wave is further straining an overwhelmed health system. It is also further complicating the painfully slow progress being made with vaccinations.

A study published in The Lancet has revealed that hospital patients who are critically ill with Covid-19 in Africa are far more likely to die than in other parts of the world because of limited healthcare resources.

It reports that in a “multicentre, prospective, observational cohort study of 3,140 critically ill patients enrolled from 64 hospitals in ten African countries… the African Covid-19 Critical Care Outcomes Study (ACCCOS) investigators show that, despite having low Covid-19 mortality rates, Africa has the highest global mortality rate in patients with Covid-19 who are critically ill: 48·2% (95% CI 46·4–50·0; 1,483 of 3,077 patients) against a global average of 31·5% (27·5–35·5)”.

Yet, according to the website, Our World in Data, by 8 June Africa constituted only 1.88% of all vaccine doses administered worldwide. 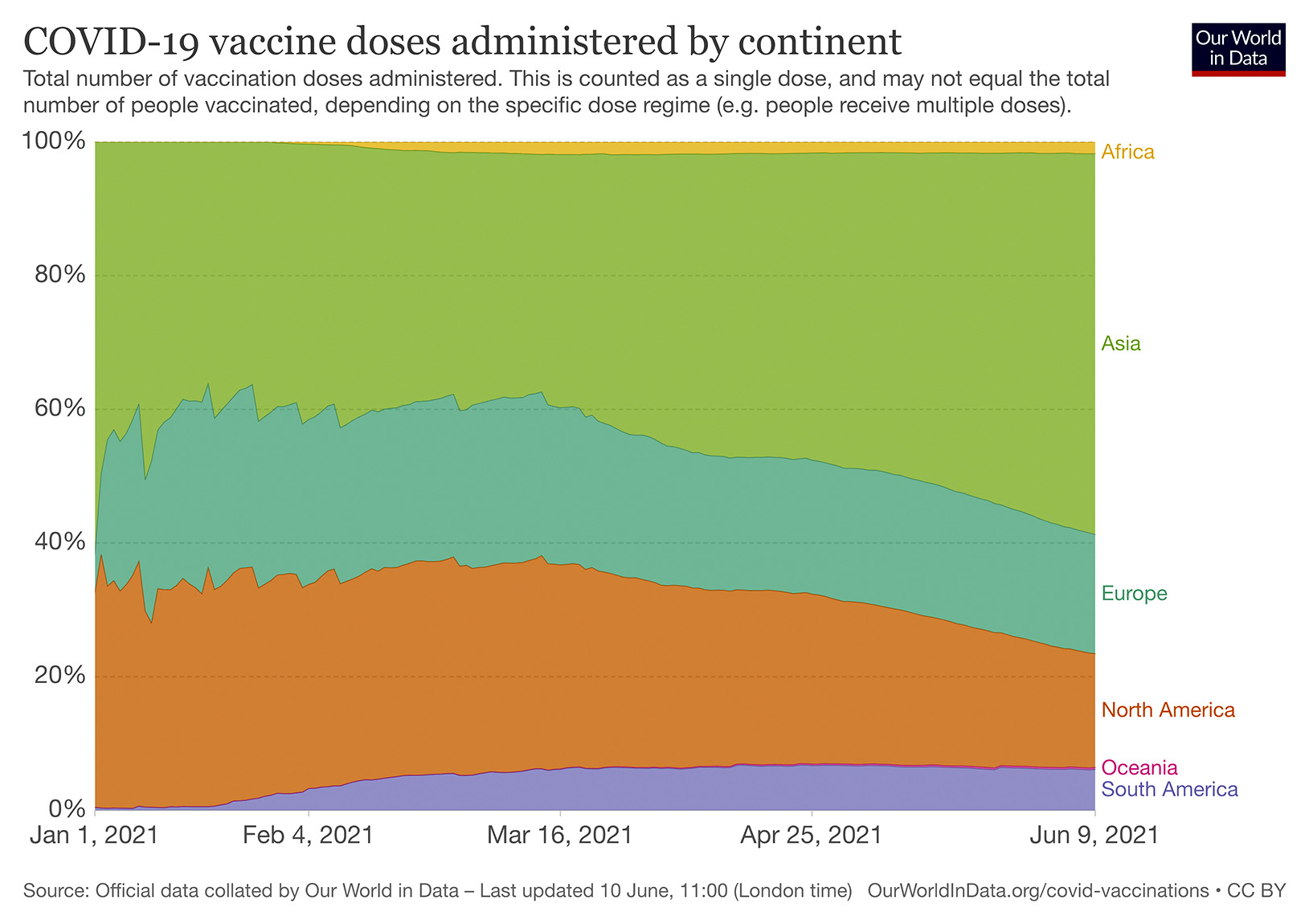 In this context, in May 2021, the Africa Centres for Disease Control (CDC) warned about rising fatality rates in Africa, saying that 21 out of Africa’s 55 countries were reporting fatality rates above the current global average of 2.2%.

South Africa is officially the most affected country in Africa, with more than 1.6 million cases and 56,832 Covid deaths. However, records tabulated by its Medical Research Council reveal that there have been nearly 164,000 “excess deaths” (deaths above the recorded average) since May 2020.

It returned to a stricter lockdown under the adjusted regulations on 31 May 2021. Four of the nation’s nine provinces, including Gauteng, are already battling a third wave of infections.

On 9 June it recorded an 80% increase in daily new infections in one day and doctors report that ICU units are once again full to capacity.

In the absence of a mass vaccination roll-out — only 1.4 million vaccines had been administered by 9 June — the South African Medical Association (Sama) has advised that tighter lockdown restrictions be implemented.

Sama argues that it is already difficult to get beds for Covid-19 patients in Gauteng, the North West, the Northern Cape and the Free State.

Namibia — A failed lockdown comes back to bite

Namibia has officially entered a third wave with the health ministry confirming a daily record of 717 new cases on 3 June 2021.

The country’s health ministry reported that increased hospital admissions were placing the oxygen-supply infrastructure under pressure. By 5 June, Namibia had recorded 57,577 cases and 899 deaths.

Namibia started its vaccine programme in March and has so far inoculated 4.5% of the 1.5 million people it is targeting.

Covid spike in Democratic Republic of the Congo

The DRC is also facing a third wave, according to health minister Jean-Jacques Mbungani (see here) with Kinshasa as its epicentre.

Like many other African countries, the DRC has officially reported relatively few cases and deaths, but health authorities are concerned about a recent spike in infections that saw 243 new cases recorded on 2 June, the highest daily figure since March 2020.

Last month, the WHO detected an “exponential rise” in Kinshasa, and expressed concern about the spread of the Delta variant.

Meanwhile, the DRC’s vaccination campaign has stuttered after it delayed the roll-out owing to safety concerns about the AstraZeneca (AZN.L) shot. As a result, about 75% of the 1.7 million doses it received from Covax in March were redistributed to other African countries for use before they expire at the end of June.

In May 2021, authorities in Zambia warned of a third wave following an increase in daily cases. The country recorded 166 new cases in 24 hours, increasing the daily positivity rate to 2.6% from 1.5% recorded the previous day.

The government said the surge was being propelled by cold weather, laxity in adhering to public health measures and the emerging campaign activities ahead of the 12 August general elections.

In a statement, the ministry of health reported that “the number of our daily new cases increased from under 100 to over 500 at the start of June and today we see over 1,000 new cases”.

Similarly, Botswana has seen an increase in daily cases. On 1 March 2021, the country recorded 2,356 cases within 24 hours, the highest number since the beginning of the pandemic. From March to date, Botswana has recorded an average of 1,124 new daily cases.

Malawi, Lesotho, Eswatini — avoiding the wave or behind the curve?

There are several countries that appear to be going against the grain. At this point, it is not clear why.

Authorities have urged citizens to avoid unnecessary travel outside the country and to continue observing Covid-19 measures.

Lesotho has also witnessed a steady decline in daily new cases, from a record high of 899 cases in January to less than 10 a day in May 2021. Cumulatively, Lesotho had recorded 10,839 cases and 326 deaths as at 8 June, while 36,637 vaccine doses had been administered.

Tanzania — from denialism to realism

In May 2021, Tanzania announced anti-Covid-19 measures aimed at preventing the importation of new variants: travellers, both foreigners and Tanzanians, are required to present negative Covid-19 tests at border points, while those in the country are required to adhere to preventive measures including mask-wearing, sanitising and physical distancing.

This is in sharp contrast to her late predecessor, John Magufuli, who downplayed the pandemic and shunned masks in favour of the healing power of prayer. Tanzania stopped releasing Covid-19 data in April 2020 when it last showed 509 infections and 21 deaths.

As far as we can ascertain, publishing Covid-19 data has not yet resumed.

While no region on the globe was prepared to deal with the Covid-19 pandemic, none could have been in a worse position than Africa. A combination of already moribund, ill-equipped and overstretched health systems and poor to non-existent emergency preparedness plans, underpinned by economic and social bottlenecks of varying degrees, makes the region especially vulnerable.

The WHO has raised concern that healthcare systems across Africa are “far from ready” to cope with a fresh surge of coronavirus infections.

Forty-one out of 46 countries in sub-Saharan Africa are in the bottom fifth of countries worldwide ranked by healthcare access and quality.

Many governments in the region have underinvested in healthcare, relying heavily on pre-paid plans, out-of-pocket payments and donor assistance.

Only South Africa approaches the medical workforce threshold (4.45 doctors, nurses and midwives per 1,000 population) that the WHO determines to be necessary for universal health coverage, but even this number hides the inequalities and weaknesses in South Africa’s health system.

The first two waves of the Covid-19 pandemic have already impacted heavily on Africa. Now the emergence of a third wave across southern Africa threatens to make an already bad situation worse.

There is no substitute for better, prudent economic planning if the region is to fare any better when the next crisis hits its shores.

Health must be seen as a human right and planned and budgeted for as such.

Sustained investment in health facilities and strong disaster and emergency preparedness plans underpinned by macro-economic stability are essential elements that governments need to prioritise, otherwise the region will forever be at the mercy of disease. DM/MC