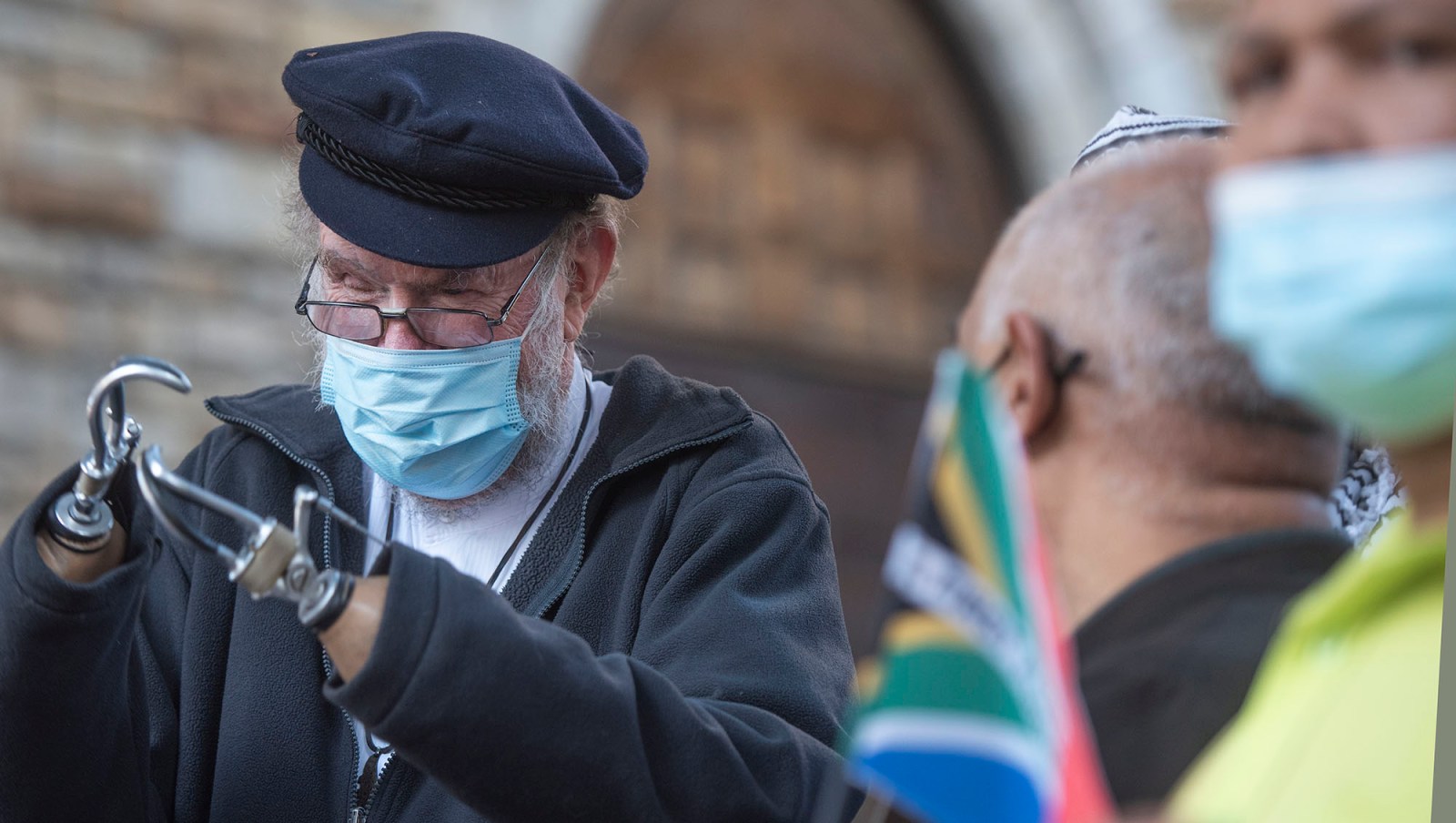 Father Michael Lapsley during the Hands Off Jeremy Vearey Picket on 9 June 2021 in Cape Town. The picket came after the Western Cape head of detectives, Major-General Jeremy Vearey, was fired over comments he made on social media. (Photo: Gallo Images / Brenton Geach)

A group of about 100 marched to Parliament to hand over a memorandum to President Cyril Ramaphosa and Speaker of the National Assembly Thandi Modise.

About 100 people marched to Parliament on Wednesday, calling for the reinstatement of fired top policeman Jeremy Vearey and for change within the SA Police Service (SAPS).

Marchers gathered at St George’s Cathedral, carrying placards with slogans such as “Moer Hulle” and “#JusticeForJeremy”, referring to the firing of Major-General Jeremy Vearey.

Daily Maverick reported at the end of May that Vearey had been fired after a disciplinary hearing into Facebook posts he made between December 2020 and February 2021.

Michael Weeder, the dean of the Anglican Church, told Daily Maverick that there was a need for a public inquiry into policing, to look at how policing is structured, the disciplinary procedures of the SAPS and how police governance styles are “in line with the Constitution”.

Weeder said it appeared there was “more and more a militaristic approach to serving people” by the police.

Eldred de Klerk, a policing expert who joined the march in his personal capacity, said there were issues within the top SAPS leadership which “destabilise the institution — there’s a lack of direction and, essentially, there’s a lack of leadership as well. The members are left floundering.”

Members of the police should have guidance and support, said De Klerk.

“Surely you should be able to have a robust and rigorous debate at the highest level of police to ensure that we, the South African people, get the best service we can from them.”

The group, led by religious leaders, marched to Parliament to hand over a memorandum to President Cyril Ramaphosa and Speaker of the National Assembly Thandi Modise.

Benson Ngqentsu, Western Cape provincial secretary of the SA Communist Party, called for a judicial inquiry into policing and described the firing of Vearey as an “orchestrated dismissal”.

Weeder read from an open letter addressed to Ramaphosa and Modise:  “On a daily basis we witness the sullying of the constitutional integrity of our republic… this is done by the very men and women who stand today accused and judged by the laws they are meant to uphold.

“Our call is for a police service South Africans deserve. Over the last decade, we have witnessed a culture of unbridled authoritarianism. It is evident in the systematic hounding out of the service of dedicated and committed police officials — the most recent example is that of the firing from the force of Major-General Jeremy Vearey.”

The open letter, handed to Charles Ford of the Presidency, calls for Vearey’s reinstatement and the initiation of a process for an inquiry into policing in South Africa.

“Its end purpose being professional police leadership in line with the prescripts of the Constitution and our democracy and with the recommendations of the National Development Plan 2030, regarding policing in South Africa.” DM