Fear and loathing: Patients battle with the hardships of Mpumalanga’s health facilities 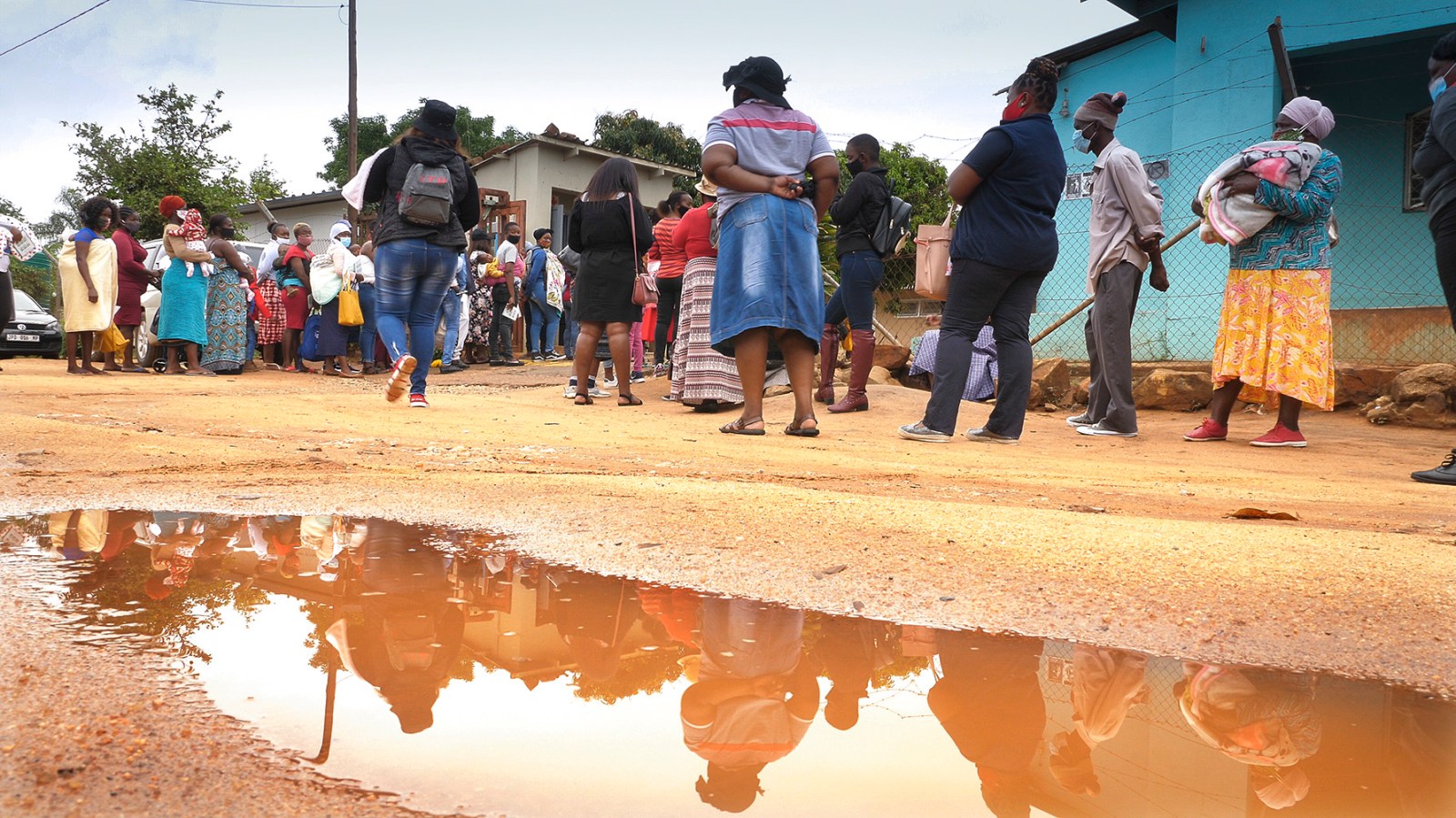 Patients face a long queue outside Manzini Clinic in Ehlanzeni, one of the 43 clinics Ritshidze monitors in Mpumalanga, in November 2020. (Photo by Rian Horn)

The province’s public health facilities are making their patients feel worse rather than better. This is evident in a new report compiled by the very people who use them.

Not only are the facilities falling apart around them, but the environment is so hostile that many patients lose sleep the night before going and fear the staff.

They’d rather stay away. Even if this means running out of lifesaving medicines.

The Mpumalanga State of Health Report May 2021 is filled with data from the observations and interviews conducted by community monitors at 43 facilities across the province in April and May 2021.

These monitors are part of the Ritshidze project, a clinic-monitoring system run by the people who use them. The project was developed by organisations representing people living with HIV, such as the Treatment Action Campaign.

The report and oral testimonies were presented to the Mpumalanga health department on 25 May. The department has promised to respond to the recommendations in detail by 8 June.

In the meantime, patients continue to battle a harsh health system.

Facility managers and patients in Mpumalanga agree: there are not enough staff. Less than a third of patients felt there were enough staff members. Only 7.3% of facility managers felt they had enough clinical and non-clinical staff to meet the needs of their patients. In most dire need were data capturers, nurses and pharmacists.

Community healthcare workers, critical for ensuring patients do not default on medicine, are present at almost every clinic but almost half do not have reliable transport.

Not only does this increase pressure on the few staff members there, but it also extends waiting times. On average, patients wait four hours and 41 minutes in a queue of a minimum of 85 people. And this is just for short visits, such as collecting antiretroviral therapy refills.

Knowing this, patients begin queueing two hours before the doors open in the hope of being seen sooner so they can go to work or care for their children. Patients believe the long lines are the result of staff shortages and staff taking long breaks.

“Taken together – long waiting times and the need to arrive near dawn in often unsafe conditions – it is little wonder that many patients are
unable to sustain HIV, TB and other care,” the report’s authors say.

“Even with multimonth scripts, one man told me that the four-monthly check-up at the clinic is an experience he absolutely loathes,” said Lucky Gwebe, a Ritshidze district organiser from the National Association of People Living with HIV during the presentation to the provincial department of health.

“He goes there early, waking up at 4.45am to make sure he gets into the queue early. It costs him R24 in taxi fare for a return trip and when he gets there he has to wait outside, even if it’s raining, windy, cold or even when it’s very hot – there is no shelter.

“You also have to stand, because there are no chairs for patients. He went on to say that they separate people living with HIV from other patients without any discretion or respect for patients’ privacy,” said Gwebe.

Owen Nhlanhla, a Ritshidze district organiser from Treatment Action Campaign, said: “One woman explained that it’s difficult to truly understand why clinic queues are long and why staff seem to work slowly and inefficiently.

“Right now she only needs to go to the clinic every three to six months and pick up her medicines at her supermarket. She says it can take her just 15 minutes to collect and go – which is a far cry from a clinic visit that takes all day. She says she doesn’t sleep the night before an appointment because she is so stressed.”

And this wait may have been in vain. Once inside the facility, patients faced chaotic filing systems, crumbling infrastructure and the possibility that the medicines they spent hours queueing for wouldn’t be in stock.

Nearly a quarter had dysfunctional filing systems. Files were in reach of anyone who walked past. They were often misplaced and lost – searching for them stretched waiting times. The main challenge was that the facilities simply did not have the space for a proper filing system.

“We see and hear that filing systems are often messy, leading to longer queues and even lost files. One woman explained that sometimes there are delays getting files or they don’t get a file or are told it is lost. She explained that it is not nice going to the clinic. Telling me that on her date, she is so unhappy. When it’s your date you are so unhappy,” said Innocentia Ndlovu, a Ritshidze community monitor from the Positive Women’s Network.

In addition, the buildings themselves were dilapidated and in dire need of routine maintenance and additional space for waiting areas, rooms for medical care and space for filing, according to facility managers. Clinics were clean in the main, but 60% of toilets were in a bad condition, with no soap or toilet paper, reported patients.

Nearly 11% of patients leave the facilities without the medicines they need. This includes ARVs, TB drugs and contraceptives. Of the 11%, half were given an alternative medicine while nearly 40% were given a shorter supply and nearly 10% were sent away empty handed.

A key concern was fostering and protecting the long-term use of antiretroviral therapy.

The province does meet one of UNAIDS’ targets – about 90% of people know their status.

It is standard operating procedure to provide extended refills or repeat prescriptions to support long-term adherence to antiretroviral therapy. However, 61.9% of patients received refills for less than three months.

The uncaring and unwelcoming environment of the facilities was a key reason people living with HIV avoided the facility and disengaged from care. More than half of patients found staff unfriendly and unprofessional. Some reported being shouted at, reprimanded and sent to the back of the queue if they missed appointments – no matter their reason. This alienated them further.

Almost three-quarters of patients reported that there was no psychosocial support. This means there is no one to discuss why treatment was interrupted and to help strategise how to get back on treatment. In addition, they were not aware of adherence clubs at the facility. These are a space for people living with HIV to share experiences and information, as well as receive their medicine and a clinical check-up.

Despite these challenges, just under half of patients living with HIV had never missed an appointment. Of those who had, most were contacted by the facility. Facility managers said the biggest challenges were incorrect contact details and not enough phones.

“One woman told me that it’s difficult to speak out and to protest against the bad service,” said Lungile Biyela, a Ritshidze community monitor from the Treatment Action Campaign.

“She says staff shout at patients. It scares people into thinking that if they complain they will not be taken seriously, or worse, they will be victimised.” DM/MC